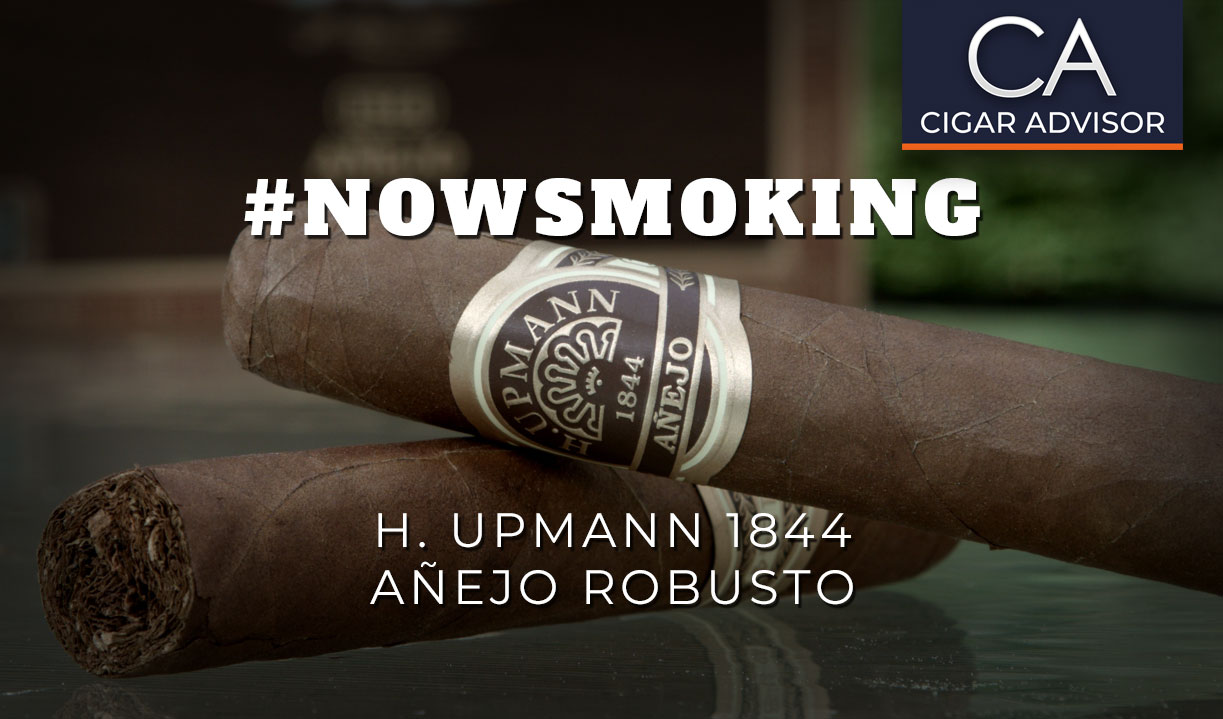 All of the tobaccos have been aged up to five years.

H. Upmann 1844 Añejo cigars are the third selection in Upmann’s “1844” portfolio and follow the recently updated 1844 Reserve and the 1844 Vintage Cameroon. Like its other 1844 kin, the Añejo delivers a presentation that reflects both the rich tradition and heritage of this iconic brand born in 1844 Cuba.

“Anchored by a sweet Broadleaf binder and wrapped in a dark, double-fermented wrapper, this cigar offers a deep aroma with a bold finish,” says Rafael Nodal, Head of Product Capability at Tabacalera USA.  Additionally, all of the tobaccos chosen for the 1844 Añejo have been aged a minimum of five years, and is why they chose the name añejo, which is Spanish for “aged” in this context. 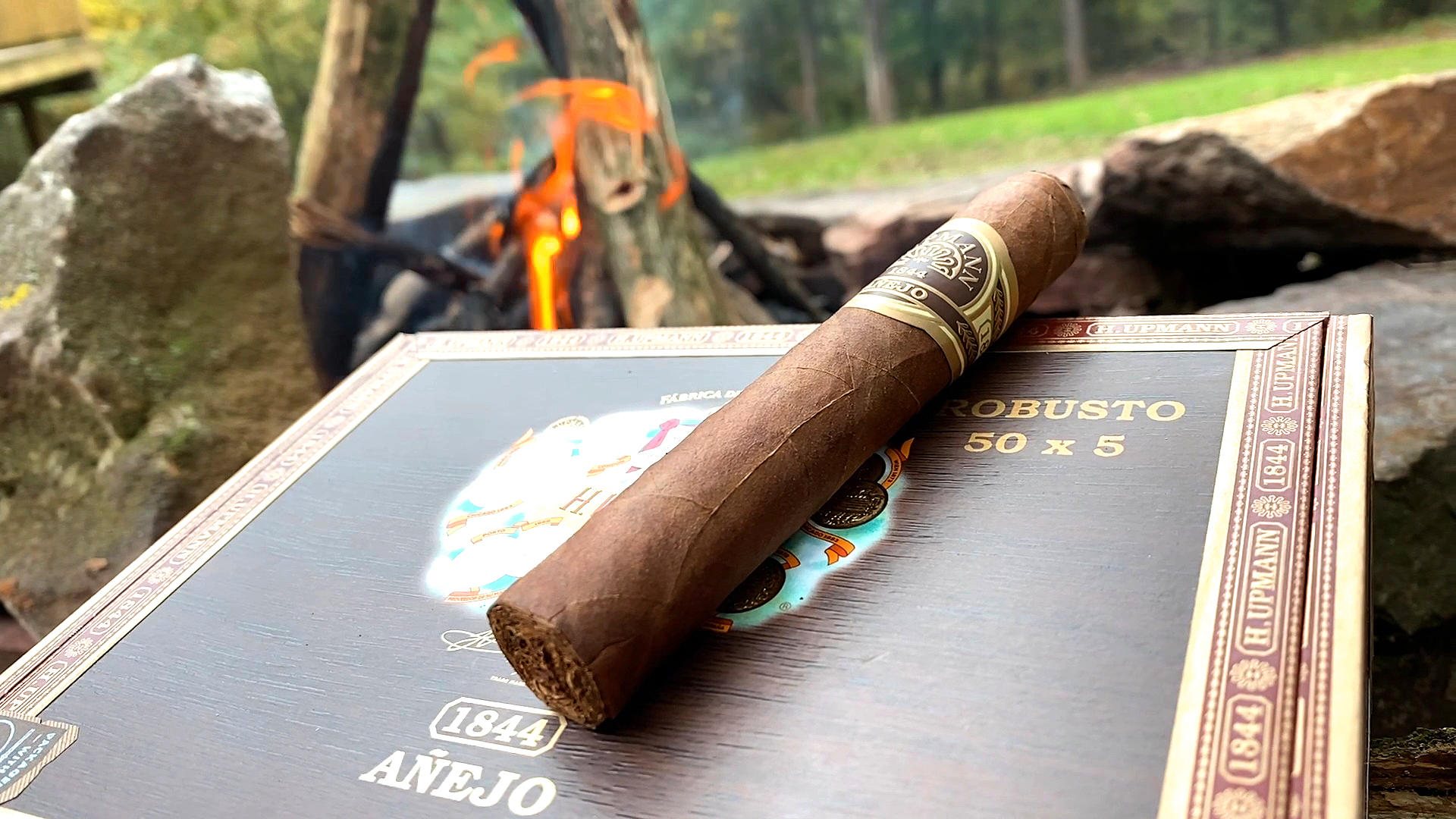 Nodal often works with master blenders like A.J. Fernandez and the Grupo de Maestros on many of these historic Cuban makeovers. But for this project he brought in Ernesto Kranwinkel, Tabacalera USA Product Capability Coordinator and Altadis USA Marketing Coordinator to work with the Grupo De Maestros from Flor De Copan on the blend. The H. Upmann 1844 Añejo selection is also Ernesto’s first blending project.

I first smoked this cigar when it was released in August. In a messaged conversation I had with Rafael he wrote: “My philosophy is to execute each blend in a way that best matches the project for it to be successful. I let Ernesto, who works with me, work on this blend from the beginning, but I felt it was missing something. So, we changed one of the tobaccos from Honduras and substituted with my secret weapon. . .Pilotico, which I am using in many of the new blends, and I think that helped a lot. In the end it is always a team effort.” 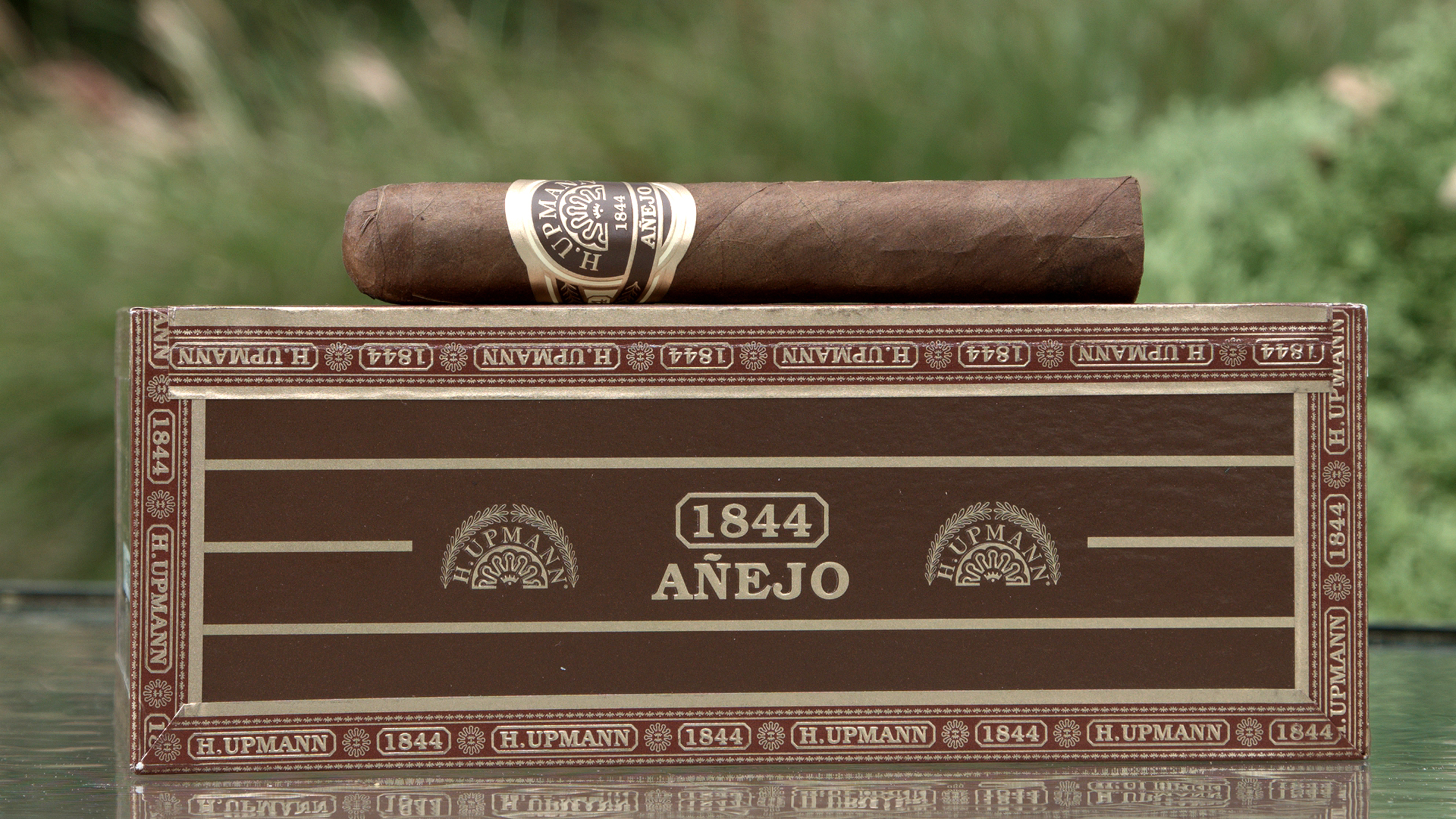 The H. Upmann 1844 Añejo Robusto embodies excellent handcraftsmanship. The wrapper has an attractive oily patina with some apparent veinage, but that didn’t detract from the cigar’s appearance for me. I also found no soft spots, and the rolling is completed with a well-fashioned triple seam cap that cuts easily revealing a perfect draw. The cold draw offered some saltiness, an herbal note, plus some leather and nuttiness.

The Robusto enters a bit aggressively with a salvo of peppery spice that continues through the first half inch, but it wasn’t overpowering in a full-bodied way. Your mileage may vary, in that, I found it lasting well into the first inch in the sample I smoked for the video. 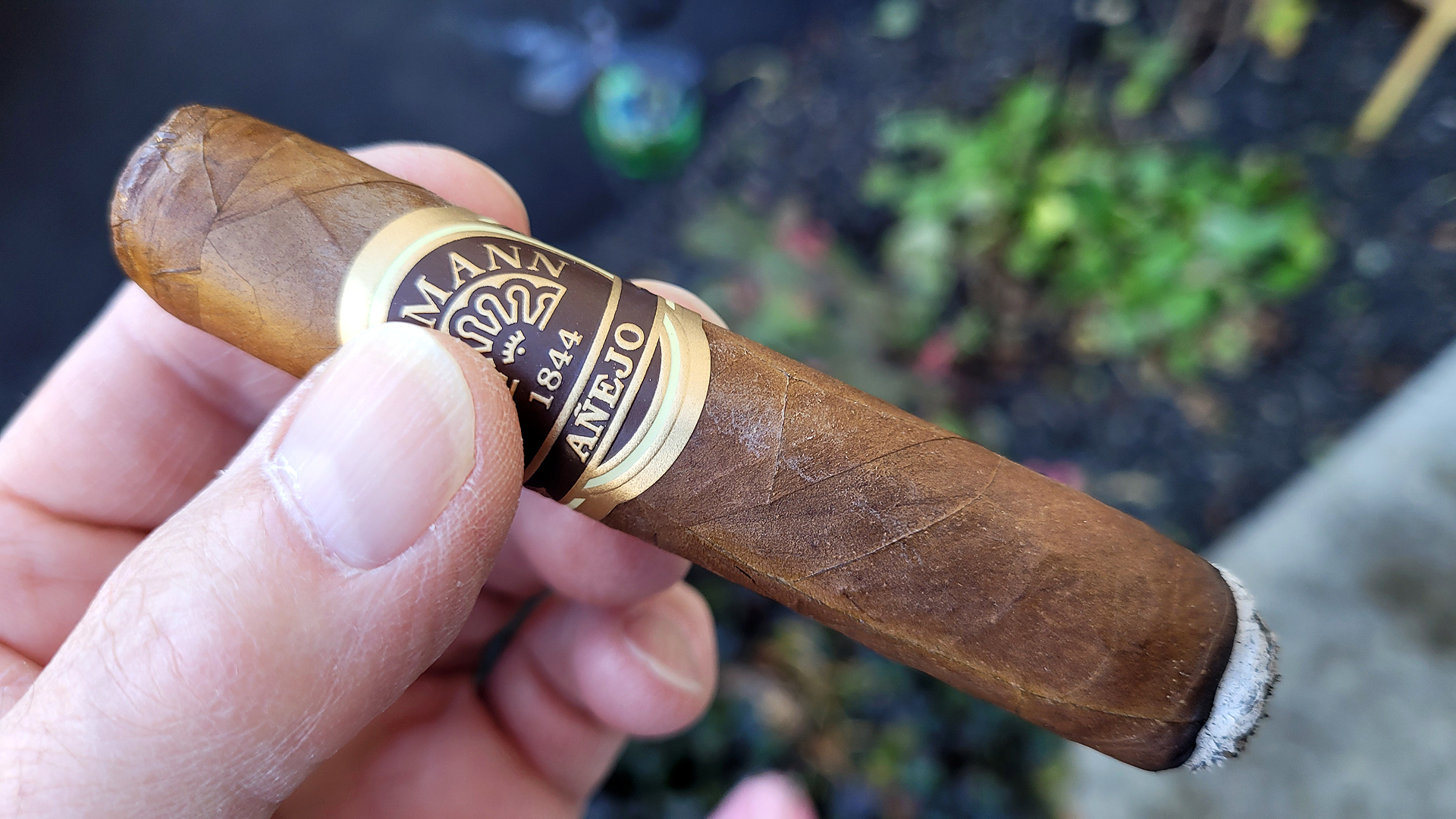 Once it rounds out, all is peaceful and calm, revealing a very creamy, medium-bodied, medium-strength smoke with notes of roasted nuts, leather, cedar and molasses-like sweetness. The salty element is also barely noticeable by the time the cigar transitions to the next section. 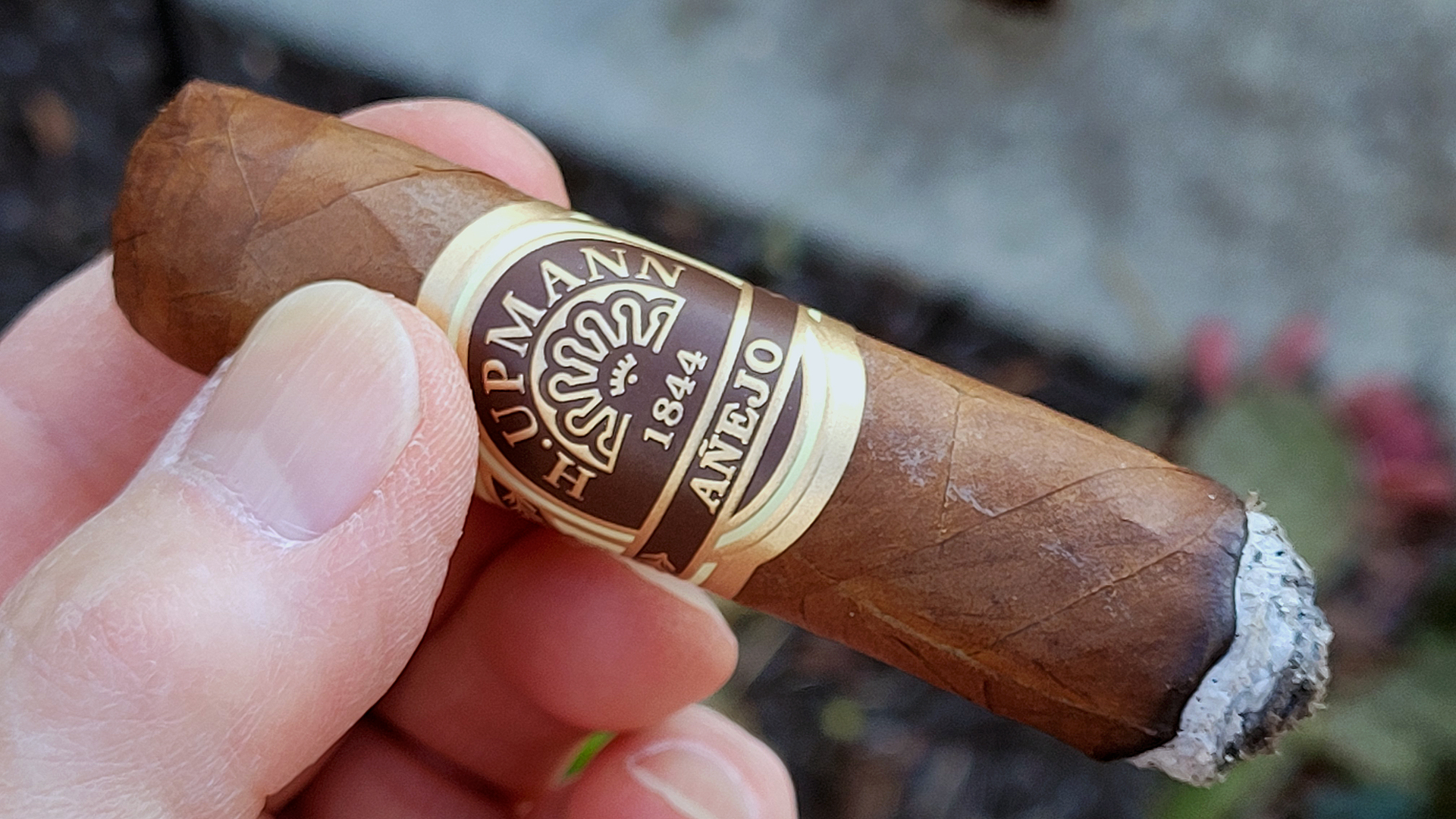 The flavors held together nicely throughout this section offering good definition, balance, and creaminess. The cigars also performed well in terms of its burn, revealing mostly grey ashes that were firm but broke-up easily when ashed, so keep an eye on it. Actually, the cigar burned so well I thought it was rolled using the entubar rolling method, but Rafael later told me it wasn’t. The strength settled well into the medium zone, as did the body which was sometimes interrupted by an occasional bold note of spice on the finish. The retrohale carried some pepper but had more of a curiously nutty element. 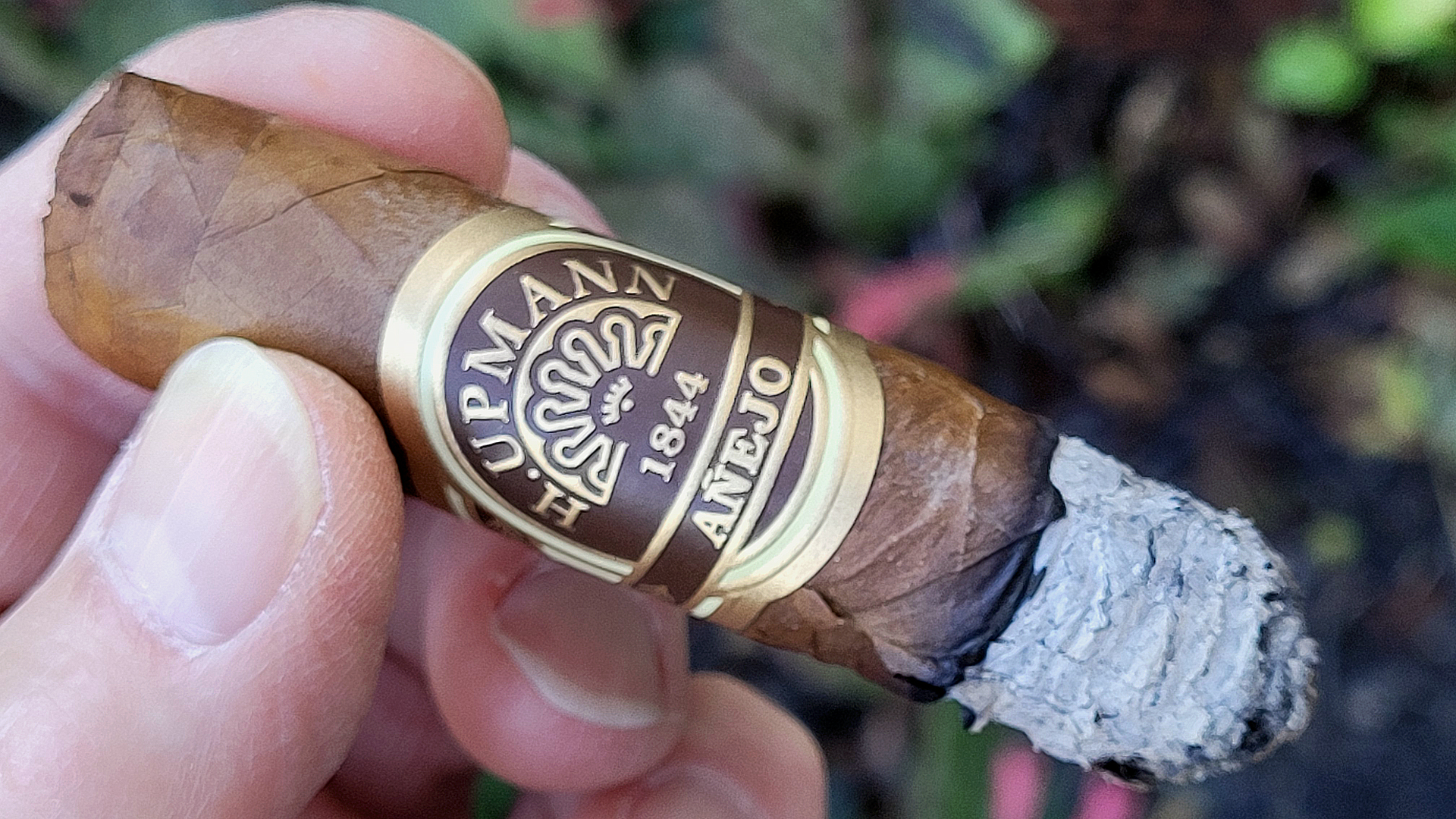 The last act also remained consistently flavorful with no sudden surprises. At this juncture the smoke continued to offer plenty of creaminess along with a rich-tasting, well-balanced mix of nutty, leathery, and sweet-spicy flavors. And as noted above, the sweetness was occasionally broken-up by some underlying peppery spice. Even the final inches had no excessive bitterness, as is often the case.

After smoking several H. Upmann 1844 Añejo, I’m convinced it will pair well with just about anything you like. Bourbon, rum, Scotch, wine, the whole schmear, just as long as the selection isn’t overly sweet. The cigar has enough of that and it’s pretty well rationed, too. 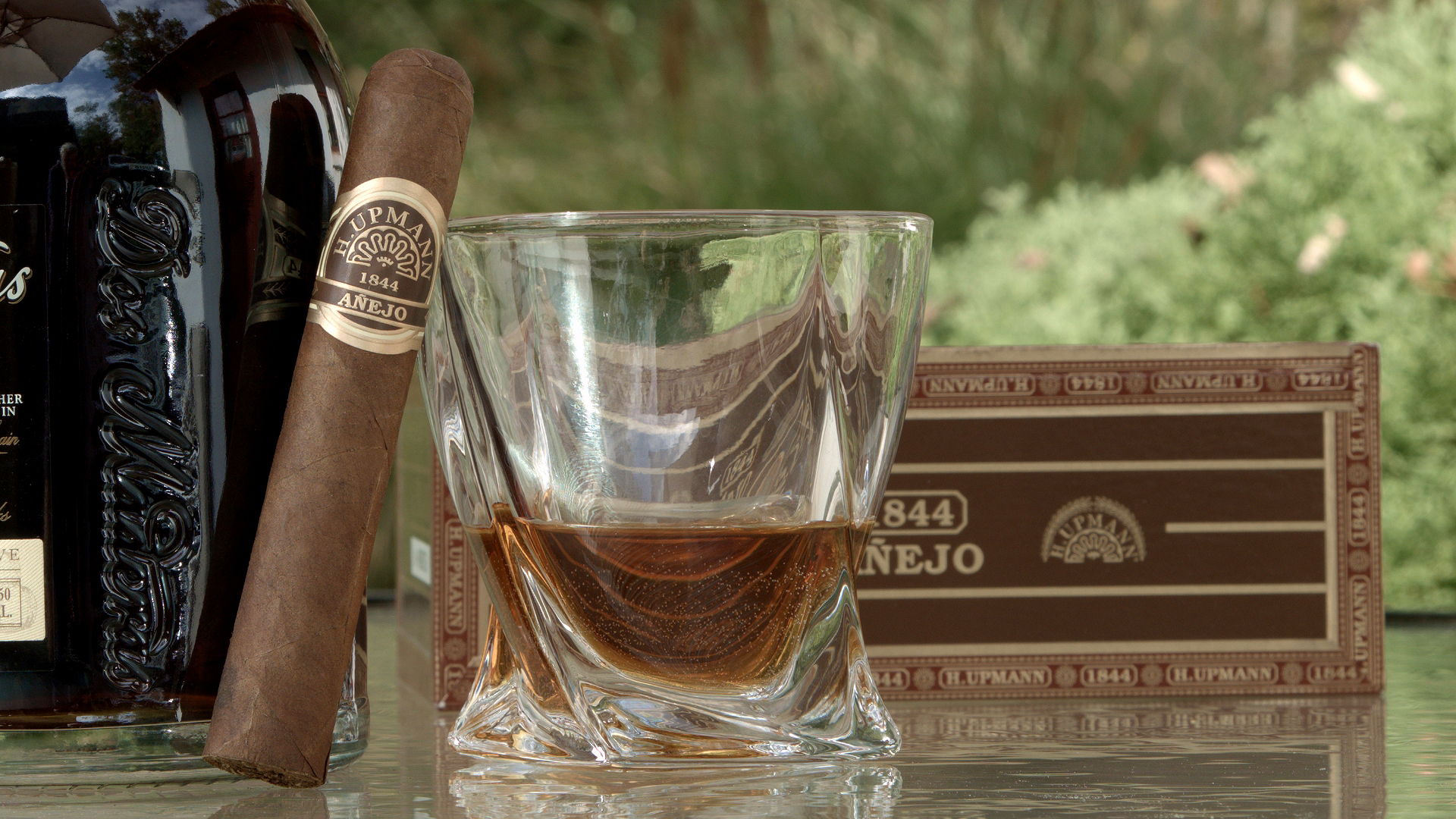 I decided to go with a wine for my Robusto which was a last minute change. I just had a feeling about it, and so I chose a Ruca Malen Classic Malbec (2017) from Argentina. This is a fruity tasting wine with a little dryness and sweetness, and it melded perfectly with the nutty and woody elements in the smoke.

I found the H.Upmann 1844 Añejo a very pleasurable smoke, so if you like your cigars medium-bodied, full-flavored, and naturally sweet, which I do, I think it will appeal to a wide range of cigar smokers, and that includes new cigar smokers. It also remined me a little of one of my regular favorites, the Romeo y Julieta Reserve (also made at the Flor de Copan factory) with a little more complexity and body. 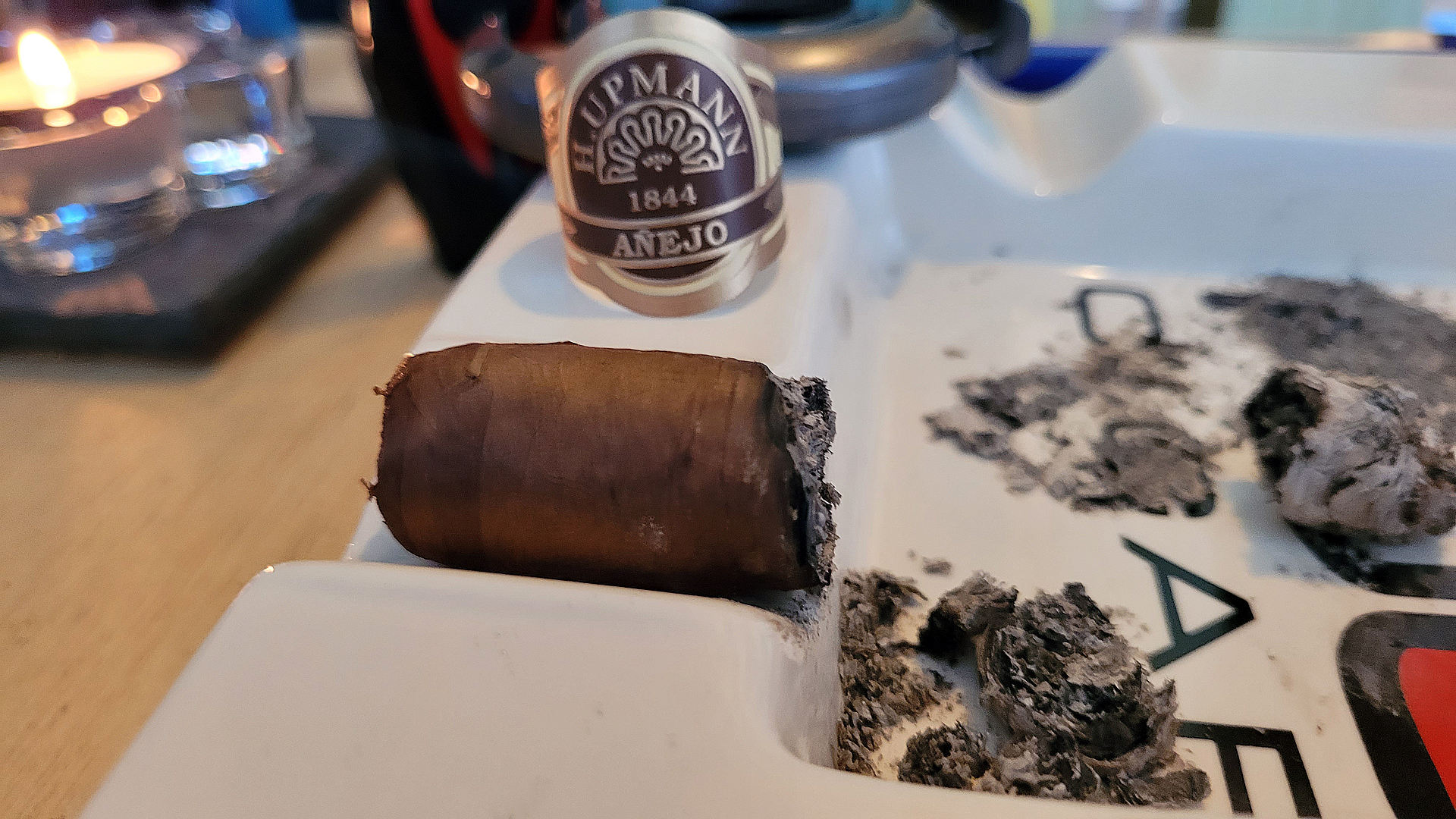 As for the cigar’s overall flavor profile, it was mostly nutty with some leather, cedar, nutmeg, and molasses, while the retrohale was more nutty than peppery. Complexity-wise, the flavors didn’t switch up very much for me other than that occasional smack of black pepper. All-in-all, my Robusto offered plenty of creaminess dominated by a nutty-leathery combo at the core.

I’m also impressed with the affordable price of this cigar. Between the long-aged tobaccos they used, combined with the refined look, feel and flavor of this cigar, cigar smokers, should get every penny out of it. So, if the H. Upmann 1844 Añejo Robusto sounds like your kind of cigar, you’re in for a great experience. Plus, you can afford to smoke it on a pretty regular basis. At least I plan to.