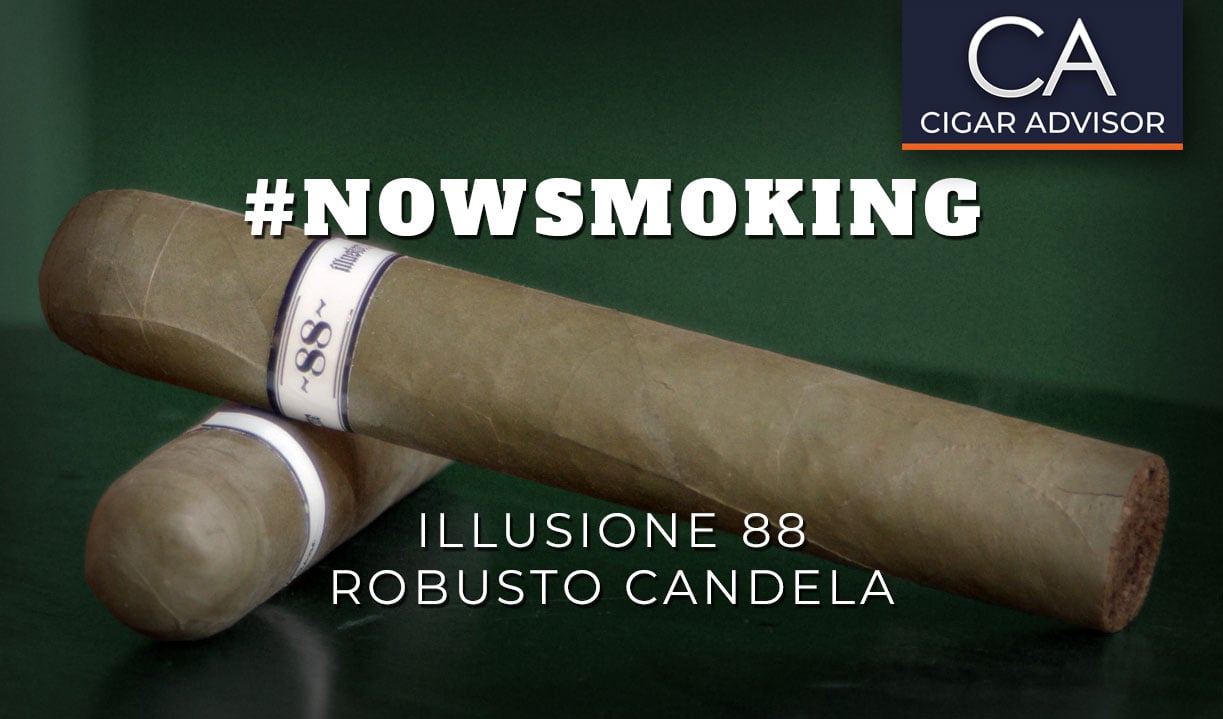 The Illusione 88 Robusto Candela Back Story 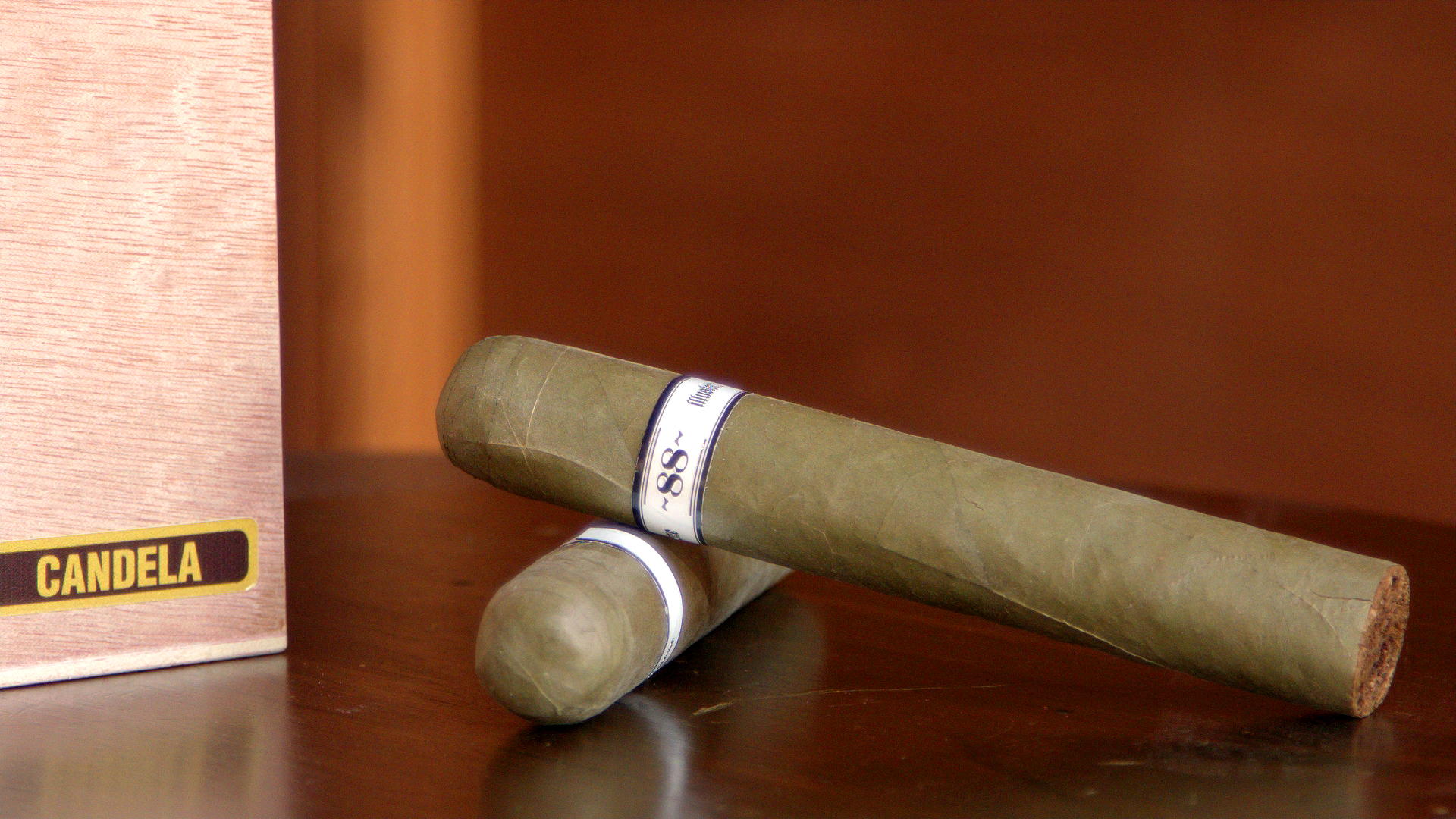 Originally released in 2011, there are a number of reviews on the Illusione 88 Candela but not so much on the line itself. However, almost every review of this particular Candela I was able to find gave it a very high score—one even as high as 93. And speaking of numbers, “88” stands for the year Illusione Cigars founder, Dion Giolito, returned to his home town of Reno, NV. But I did find out a little about the very illusive Illusione Cigars. 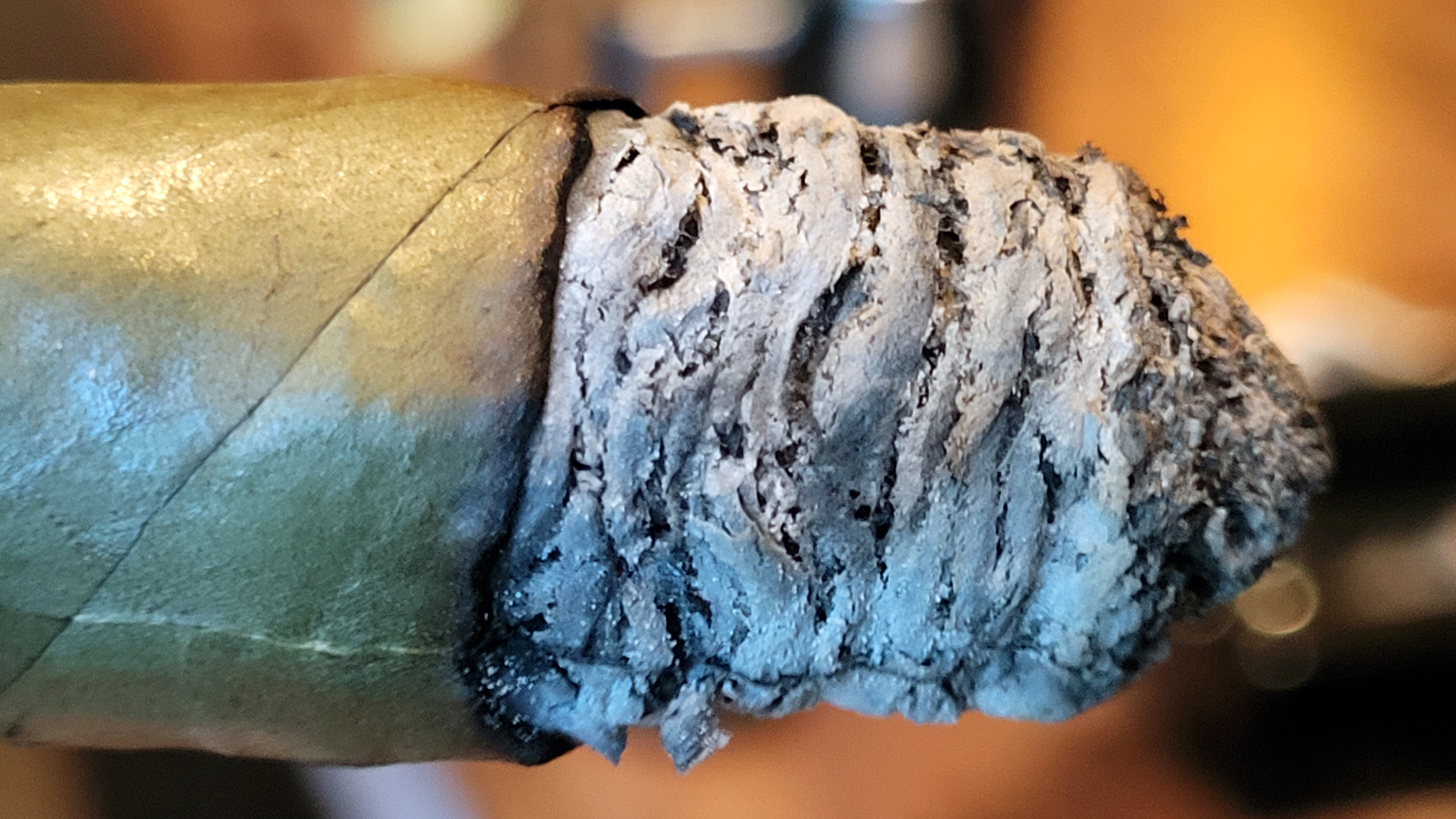 Dion Giolito started on the retail side of the business as the owner of his own cigar store in Reno. In the mid-2000s, he launched Illusione cigars, and today they are one of the most popular nationally distributed boutique cigar brands. Since then, the Illusione line and its subsequent brand extensions have received a ton of high ratings and awards, including many of the annual Top 25 Cigars of the Year lists. 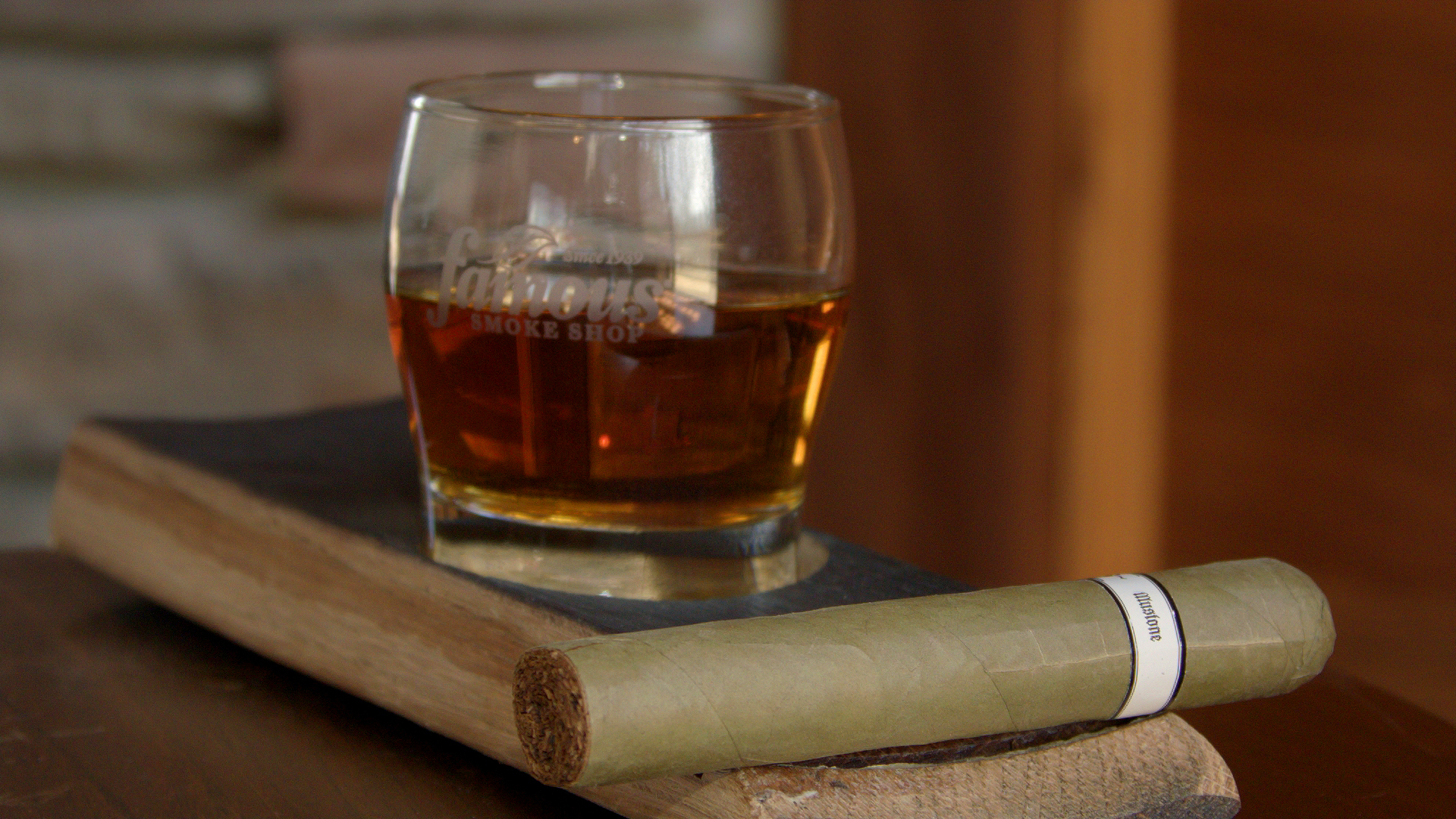 “We Are Not Industry Standard”

That’s the Illusione Cigars company motto. And if you follow them or smoke their cigars pretty often, you already know what that means. (Visit Illusione’s website or social media pages if you don’t.) Being from Nevada, the state that gave us “Area 51,” the Illusione brand echoes imagery of conspiracy theories, alien investigations, secret societies, masonic symbols—even the brand name comes from the Illuminati. 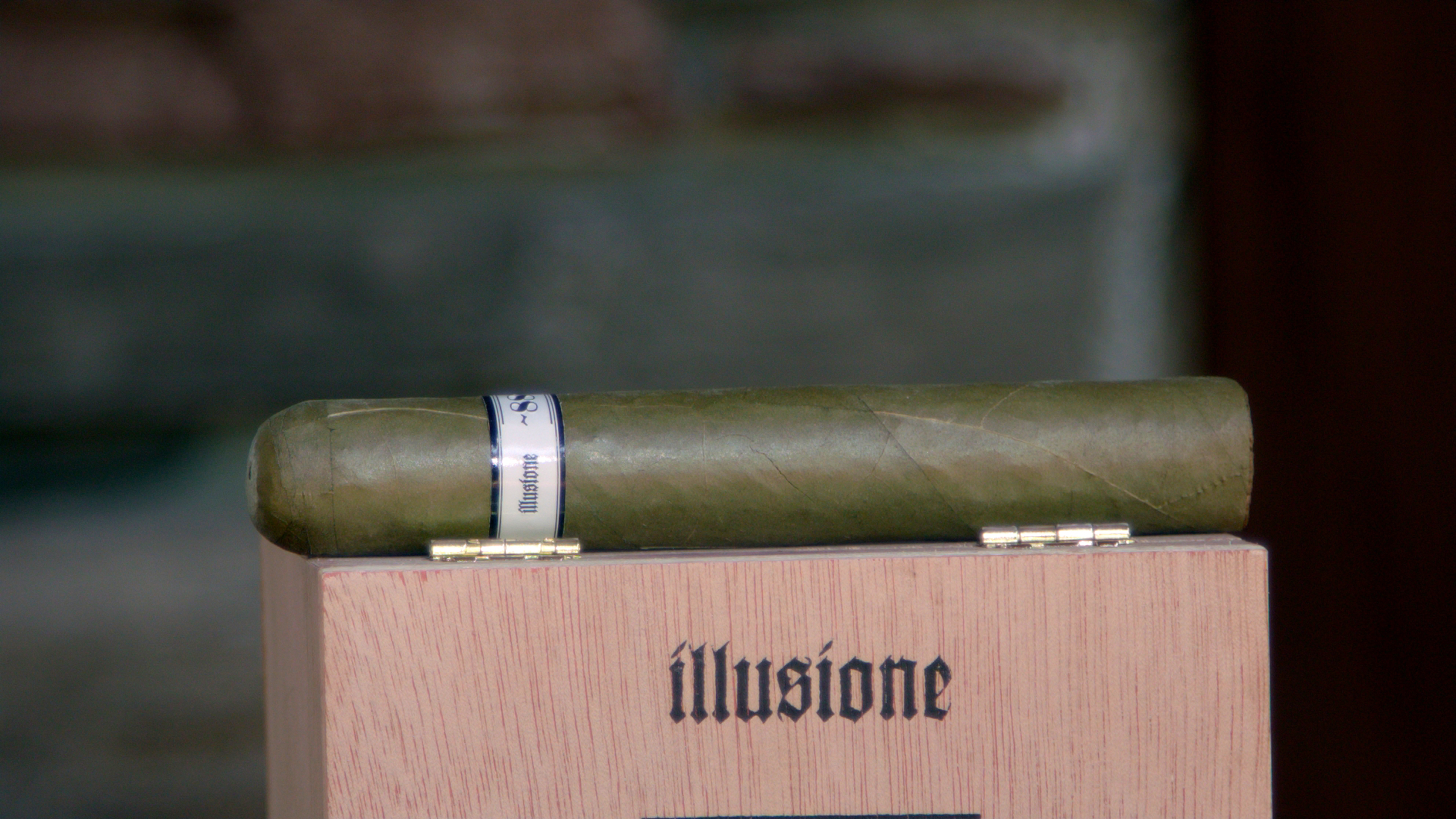 Giolito’s knowledge and experience with cigar tobacco runs deep. He especially loved the flavor of 1970’s-vintage Nicaraguans made before the war with the Sandinistas. They became his inspiration and goal for Illusione. Now made at TABSA using Aganorsa farm-grown tobaccos, Illusione cigars include Epernay, Fume d’Amour, Ultra, One-Off, Haut 10, Cruzado, and Singulare, to name most their selections.

Construction: Well made. Firm up-and-down its length and skillfully wrapped in a chameleon-colored Candela leaf. Affixed with a triple seam cap, the wrapper bares only a few noticeable veins; otherwise, it’s a really pretty leaf, but it’s also very delicate. The smell off the wrapper is a bit grassy, while the aroma at the foot is sweet. Using a double blade cutter, the cap came off in a perfect circle, and the draw had just the right amount of pull.
Cold Draw: Earthy and slightly herbal.
Toasting and light: No problems, but I suggest you keep the flame at a safe distance from the foot so as not to scorch the wrapper.
Base flavors: Earth, cream, cedar, sweet tobacco, various spices.
Aroma: Slightly floral.
Retrohale: Smooth, but with a white-pepper spiciness.
Burn & Ash: Excellent. My pre-video 88 Candela sample’s wrapper was a little dry and developed some cracks, yet it still burned well revealing a firm, mostly grey, cone-shaped ash (see my pix). My on-camera cigar was amazing. It was better humidified, too, with no wrapper issues and a perfect burn from end to end. 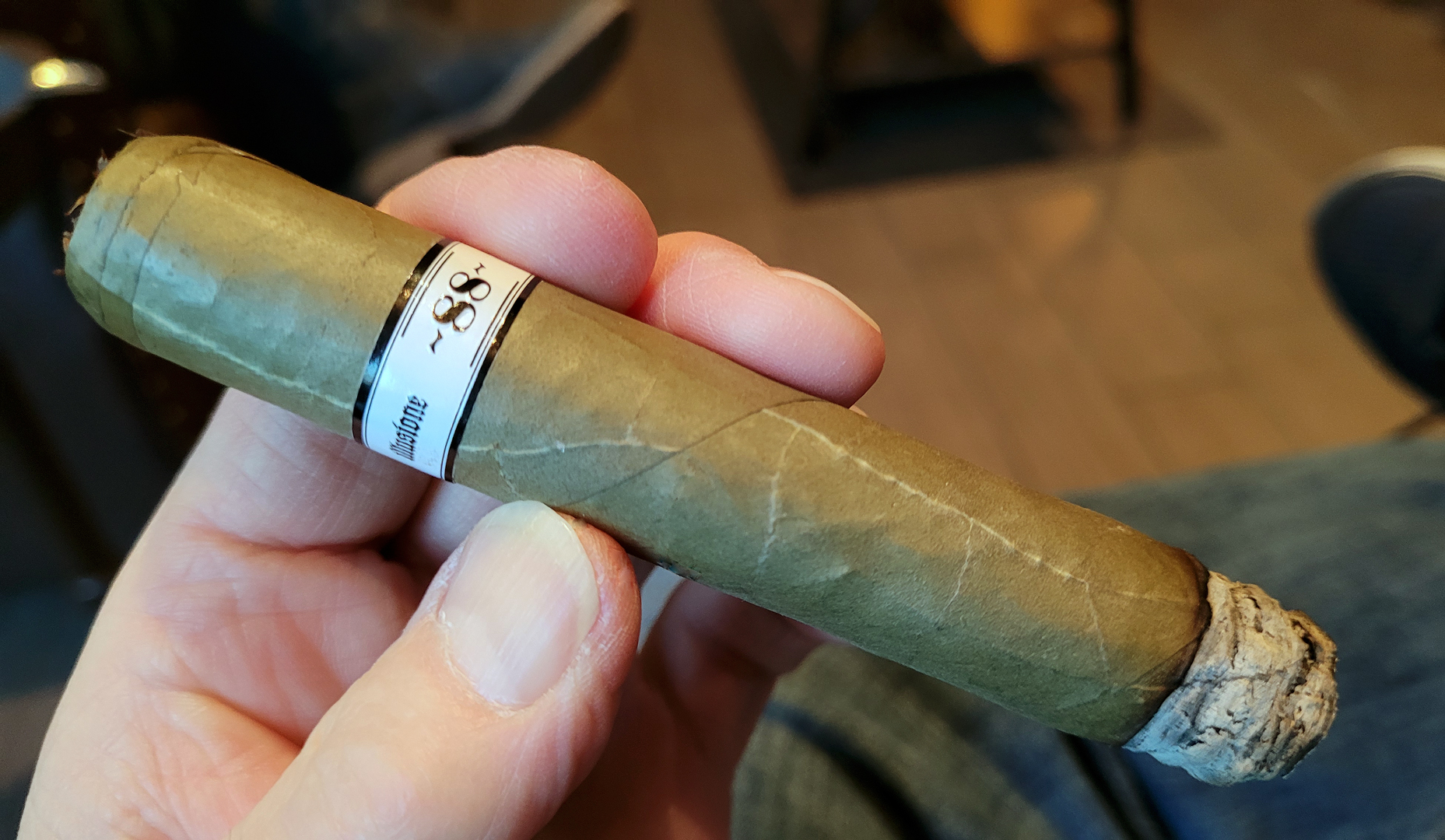 The first few puffs start out very peppery and earthy for this puro, which was not surprising given the filler. Shortly afterward, the cigar rounded-out to a nice, mellow smoke with some earthiness and a slight grassy note. Once you get in an inch or two, the primary flavors remain somewhat earthy until it transitions to a sweeter, creamier smoke with a little cedar in the mix. 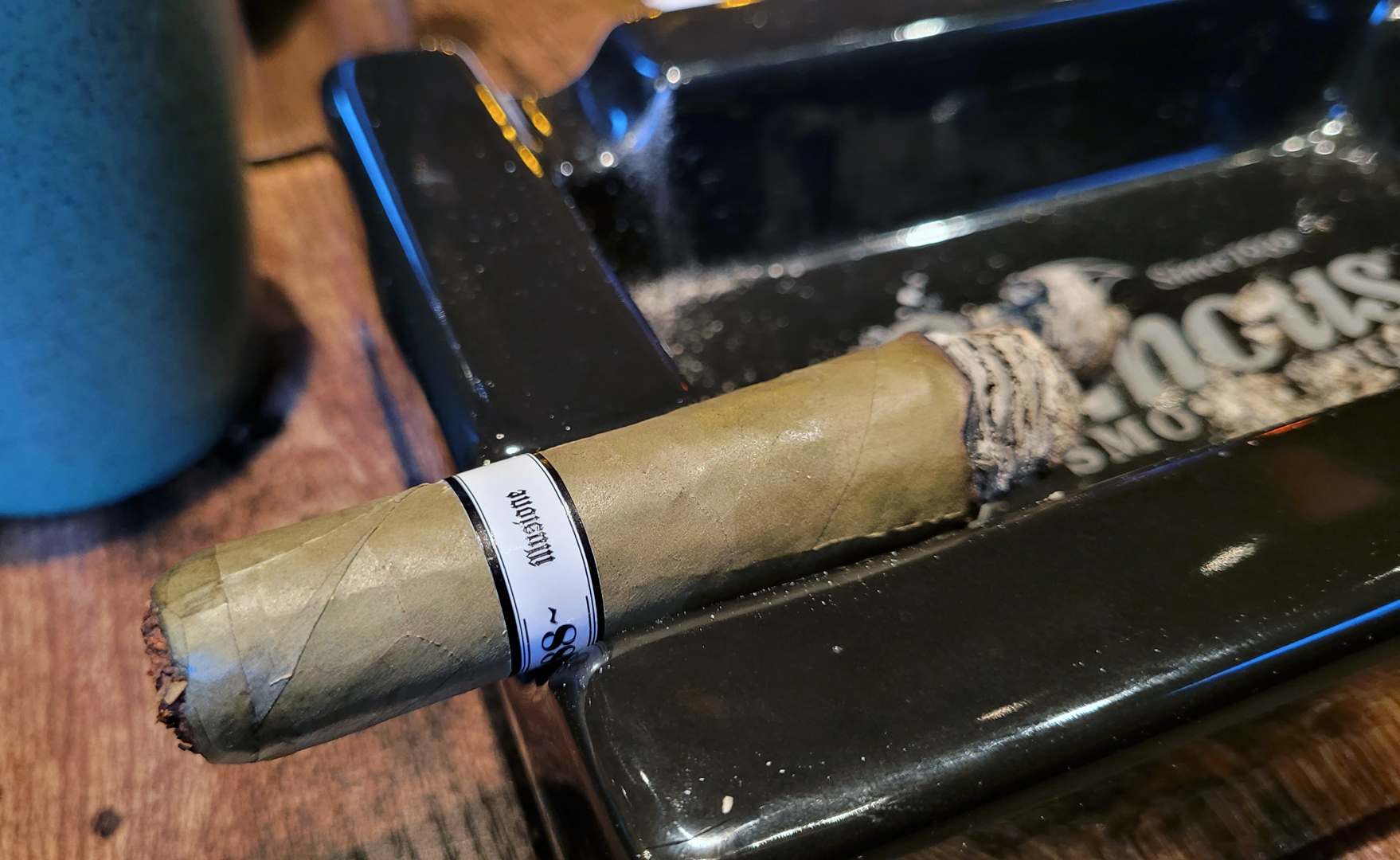 Impressively mellow and creamy with a more mellow body than medium. More cedar is also present in this section and the flavors are well balanced. So far, the cigar is very enjoyable, and occasionally a note of cinnamon leaks into the mix. I’m also getting a faint floral note which is more present in the cigar’s aroma. 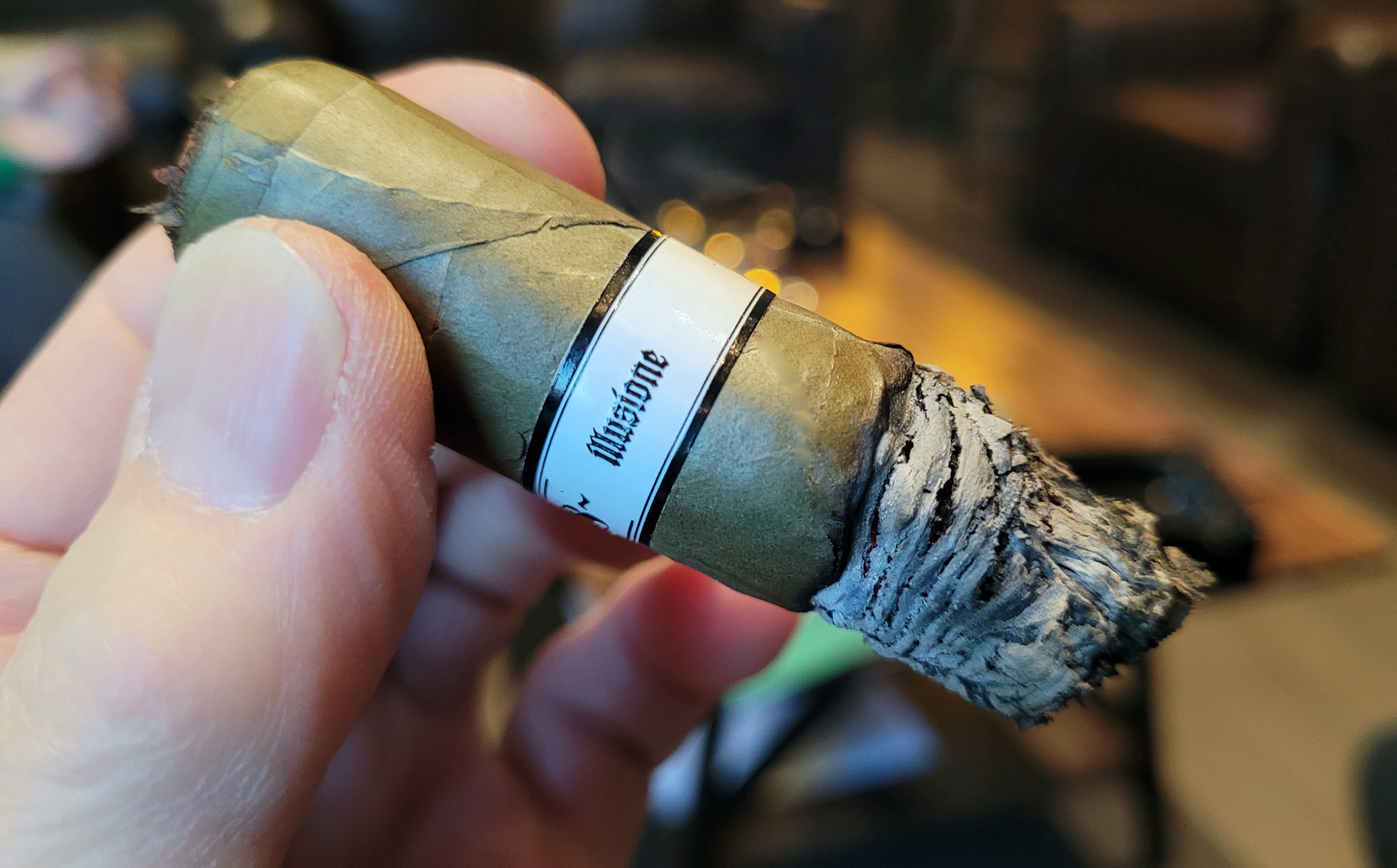 Pretty much like the mid-section in terms of flavor. The cigar has also been very consistent in its being exceptionally creamy. It’s also developed a more medium body. I noticed the cigar becoming a little sweeter in this section, too, which was a nice reveal, and made it a nubber. 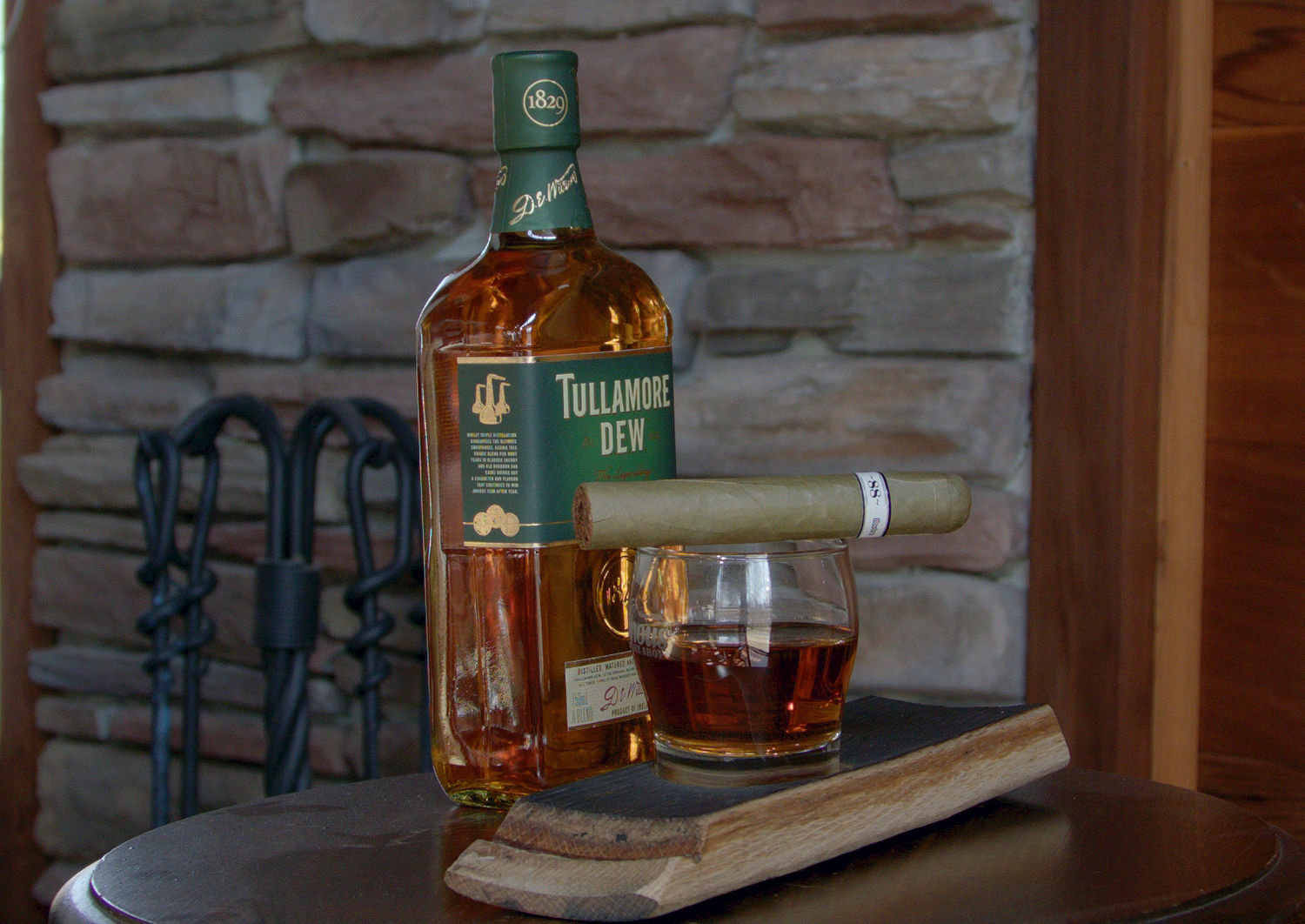 I chose the Tullamore D.E.W. more for the St. Patty’s Day thing, but it does make a nice match-up. Certainly, the Illusione 88 Robusto Candela is quite mellow, so any good whiskey or bourbon that’s not too heavy should do the trick. Wine drinkers might want to opt for a fruity Chardonnay or Sauvignon Blanc. 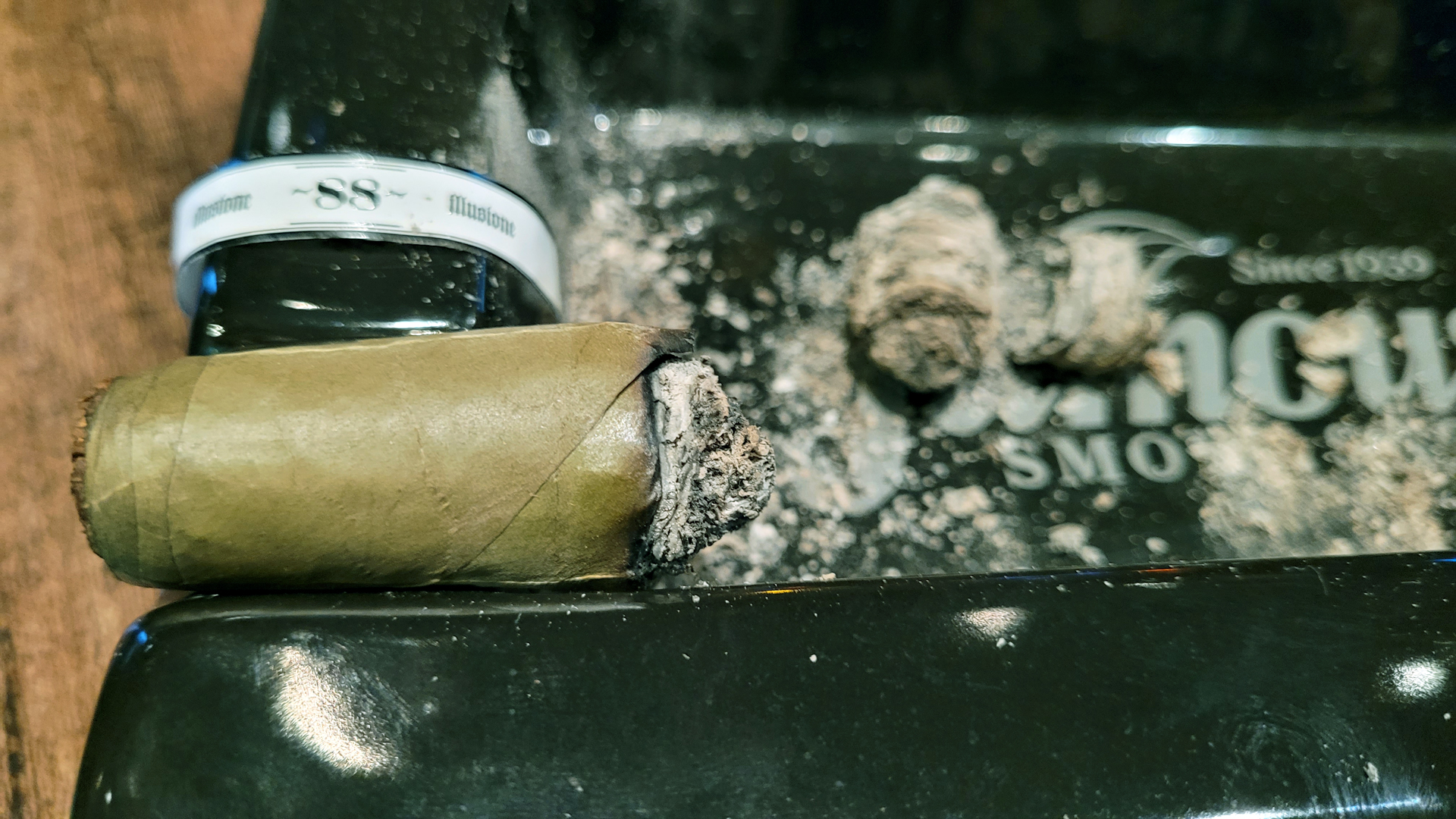 As I said in the video, I don’t smoke a lot of Candelas, which decades ago were very popular, and referred to as American Market Selection cigars. As for this Illusione 88, the flavor profile was well-balanced and mostly creamy, woodsy, and sweet, with some underlying earth and spices. But since the wrapper is so mellow, the Nicaraguan core is the real star of this show. So, for smokers who like mellow Nicaraguans, I think they’ll want to smoke the Illusione 88 Candela Robusto more than just one day a year. Better yet, it may even be a great way for newer cigar smokers to taste how prime Nicaraguan tobacco really tastes.

Reading Time: 6 minutes Humidors come in all shapes and sizes, and that means a wide range of prices, too. For the cigar smoker who wants a traditional cigar humidor at a fair price, Gary highlights five of the most affordable homes on the market for your cigars: the best cigar humidors under $50.