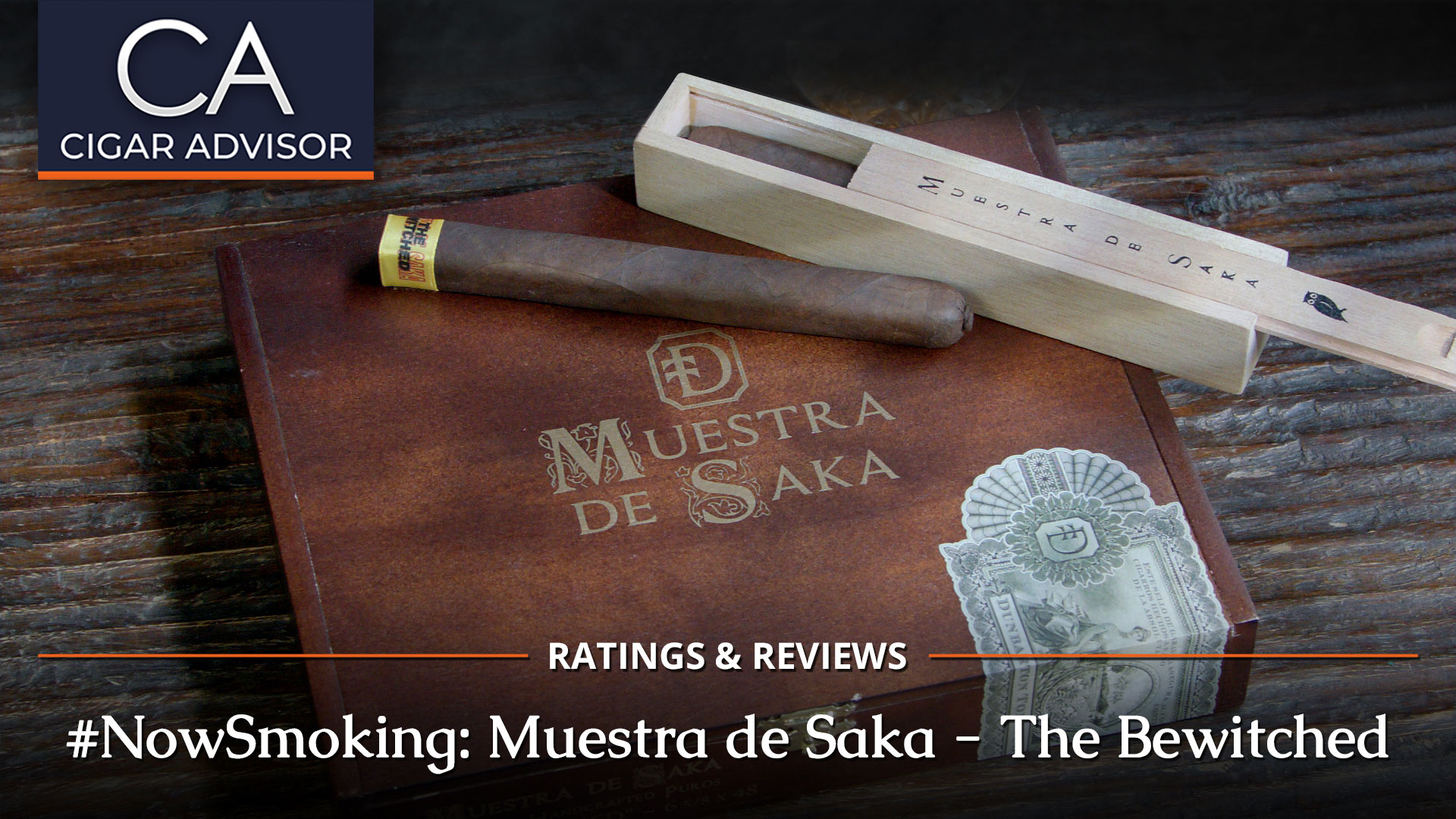 Presented in boxes of 7

“Muestras are hoarded and coveted not only by their makers, but by the cigar smokers who seek to catch a glimpse into the cigarmaker’s soul within their smoke,” writes Steve Saka, founder of Dunbarton Tobacco & Trust. With that, behold The Bewitched; so named for “how it so captivated my own palate,” said Steve in the cigar’s press release.

The Muestra de Saka The Bewitched was originally created to celebrate the Owl Shop of Worcester’s 75th Anniversary. After receiving the cigars, the Owl Shop’s third generation owner, Zack Photakis, told Steve The Bewitched was “too good to not share” with Dunbarton’s other accounts, which is why it’s been made available to other cigar retailers. 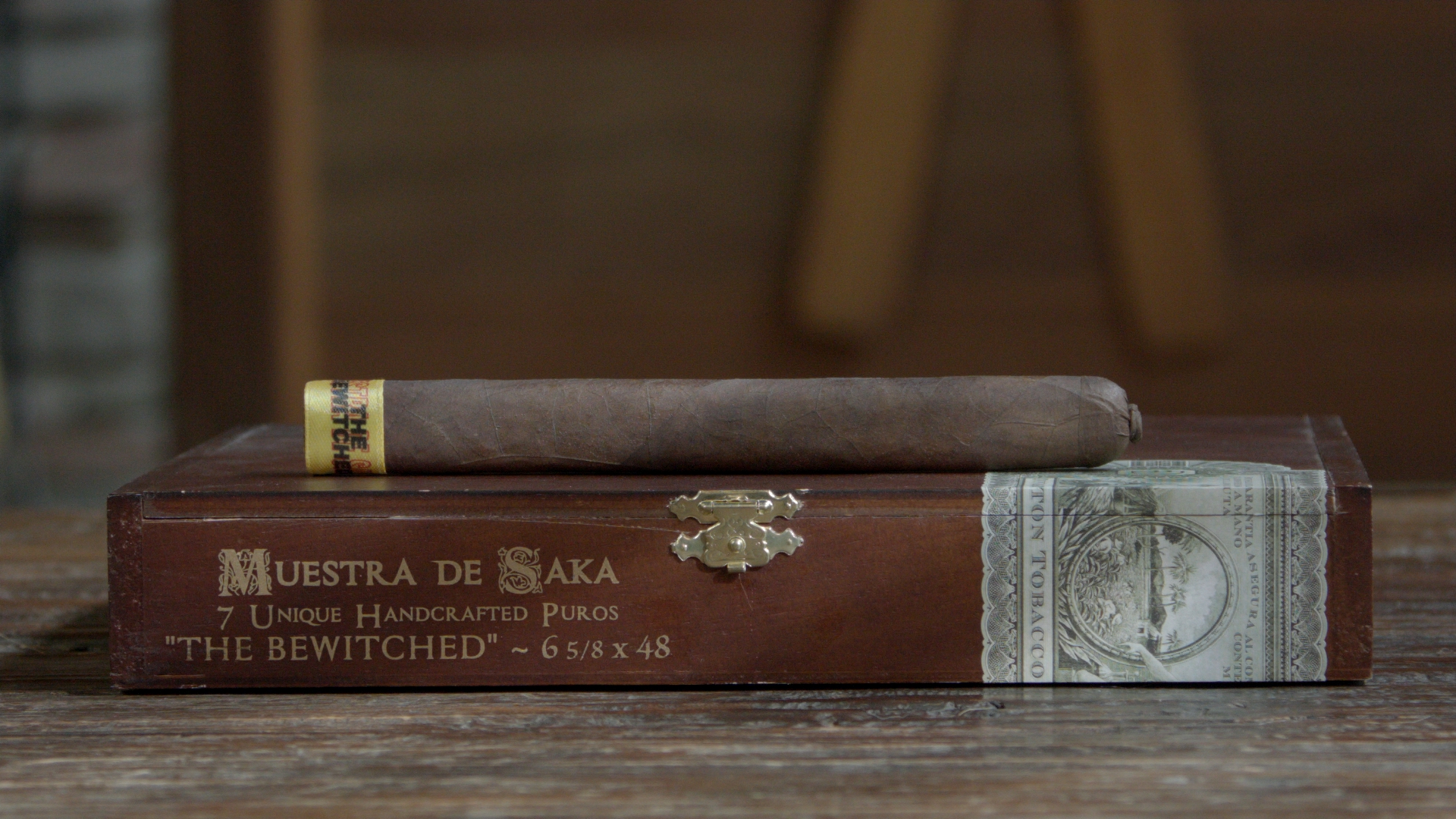 A closer look at the coffins reveals the image of an owl. Not only is this a nod of recognition to the Owl Shop’s family legacy, but a bizarre yet happy coincidence was also revealed. Steve later learned that Nicaraguans have a superstition about owls, believing they are the physical manifestation of witches who cast their spells upon the people at night. Black owls are evil witches while brown owls are good witches.

Of course, what really matters is how much cigar smokers like it, so I’ll leave you with this last remark from Steve: “Whether it is the spell of a black owl or a brown owl, I don’t care, because I love this cigar’s magic!”

Construction: The Muestra de Saka The Bewitched is solidly rolled inside an attractive dark brown wrapper that’s just a bit uneven in color. The wrapper also offers a sweet barnyard aroma. The Bewitched is also box-pressed, but not too sharply and it feels nice when held. The spiral, tail-like cap is perfectly finished at the cap while a yellow silk foot band resides at the bottom of the vitola to identify it. (I repositioned it at the neck for this review.)
Base flavors: Cream, cedar, black coffee, brown sugar, cinnamon, light earth.
Aroma: Sweet.
Burn & Ash: Textbook burn. No issues. Ash is dark grey and quite firm breaking off in half to one-inch nuggets. 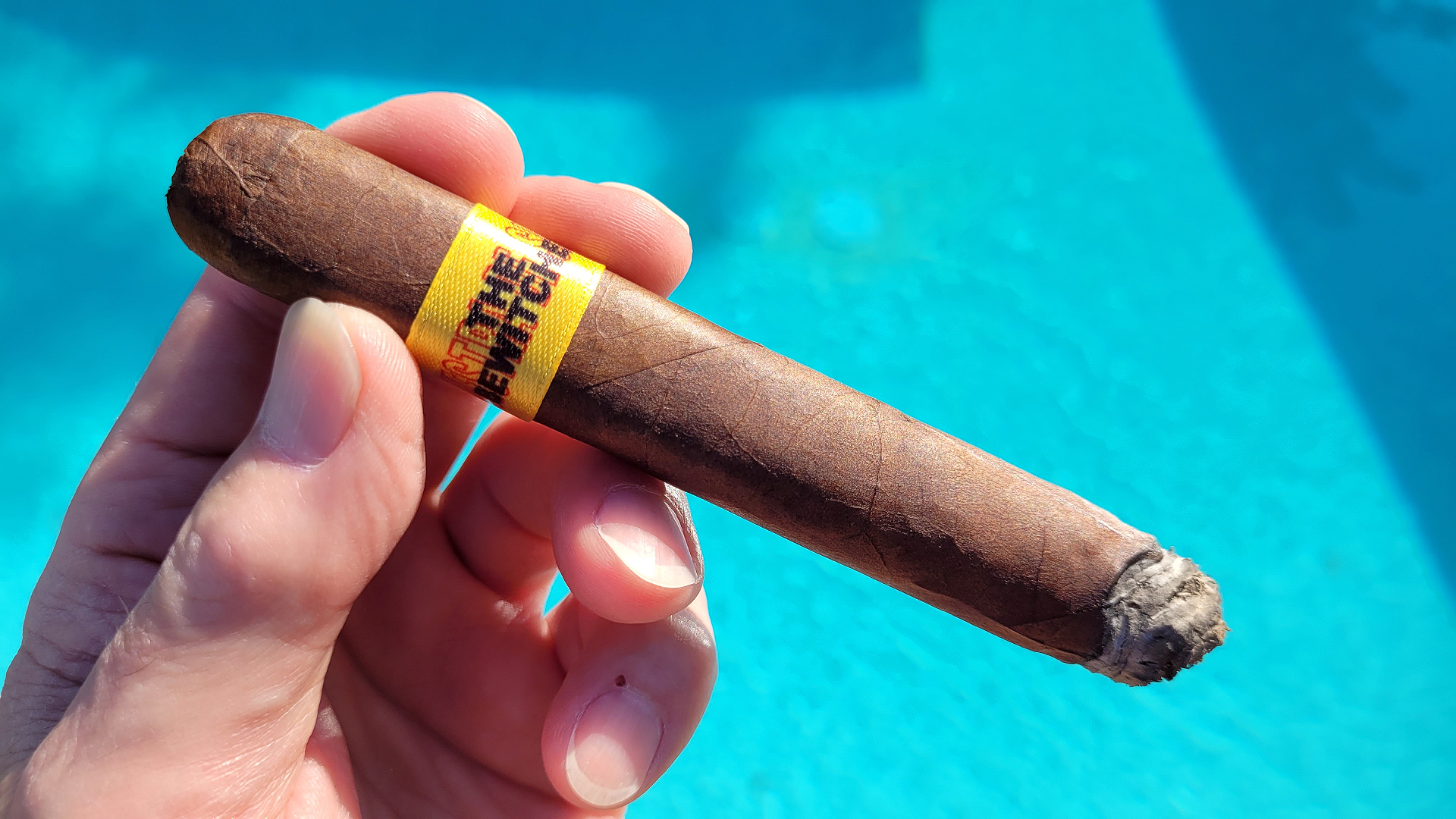 Rather than cutting the spiraled cap, I twisted it off and the draw was perfect issuing an earthy-leathery taste with some lip-tingling spice. (Try it!) Once lit, the first few puffs were velvety with a bit of black pepper which disappeared within the first half inch. Not long after that, the smoke rounded out into a smooth, creamy mix of cedar and black coffee. Later on in this section the smoke was medium-plus in body, nicely chewy, and balanced with flavors of cream, brown sugar, cedar, cinnamon, and occasional hints of light earth. 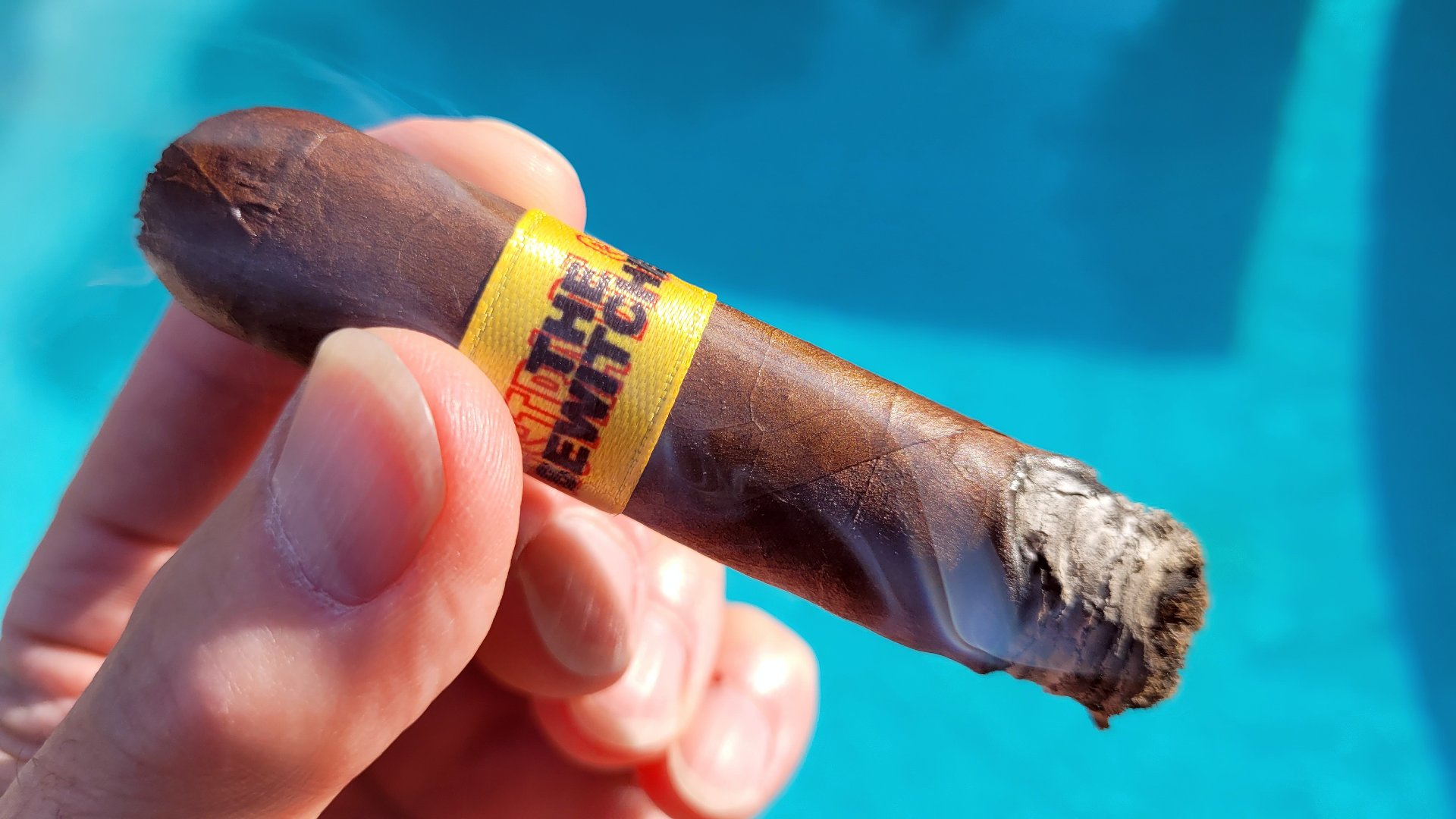 Act II was a more refined extension of Act I. The body was still medium-plus but medium in strength. The smoke was uber velvety, well-balanced, and the flavors were more layered. Cream underscored by cedar, brown sugar, and cinnamon were the most obvious, while a few puffs offered a hint of almonds. 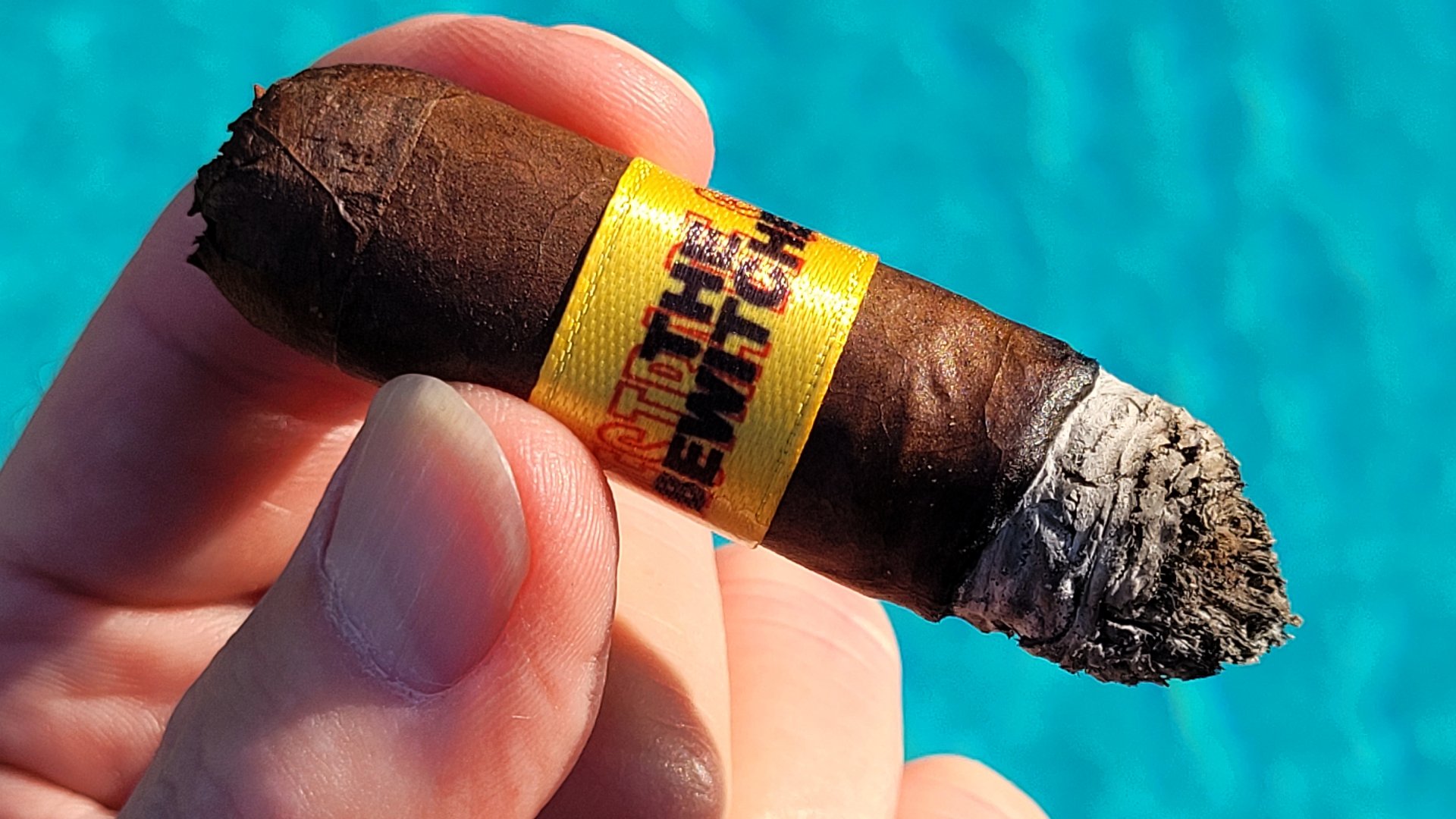 The cigar was earthier at this point and pushing into the full-bodied zone. (I began to wonder whether I was not taking my own advice and smoking the cigar too fast.) However, the cream, cedar and spice were still alive, and the cigar was still impressively smooth right down to the last literal inch. (See photo.)

What whiskey pairs well with the Muestra de Saka The Bewitched? 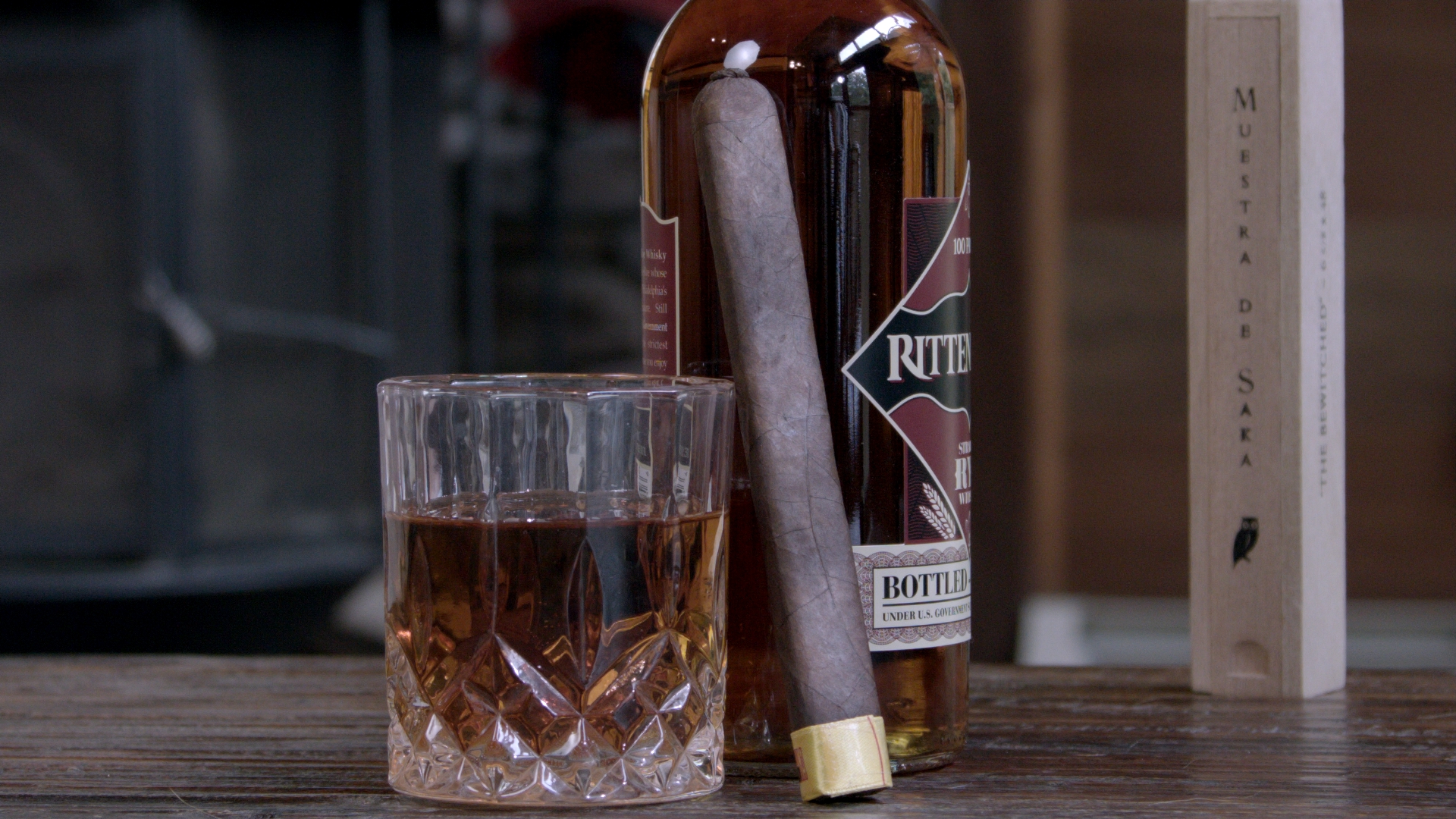 I suppose a lot of readers will go for their favorite bourbon on this one, which definitely works. However, in this case, I just might go for a fine port, cognac or brandy. For more professional combinations, see our Cigar & Spirit pairing guide.

Is Muestra de Saka The Bewitched cigar worth smoking?

Another excellent cigar from Steve Saka, which he wouldn’t classify The Bewitched as a “muestra” if it wasn’t top shelf in every respect. Here we have another vitola that demonstrates the full potential of perfectly-aged, top grade tobaccos. As I said in the video, I’ve had creamy smoking cigars in the past, but the velvety smoothness of The Bewitched was seductive throughout. I also liked how the flavors were layered. The Bewitched was not a sweet smoke, but there was just enough to keep me satisfied.

Suffice it to say… the Muestra de Saka The Bewitched is a truly elegant cigar that should be lit when you have the time to commit to it and revel in all its enchanting virtues.

About to leave for Tennessee, will have to stop by and make a purchase for the vacation.

Reading Time: 13 minutes If someone asked you which cigars you like, what would you tell them? And what would you say if that person asked, “why?”
If you’re on the hunt for a go-to cigar, you should know at least a little something – even one thing – about what makes these cigar brands and their makers special, and why they’ve earned a spot in so many humidors.