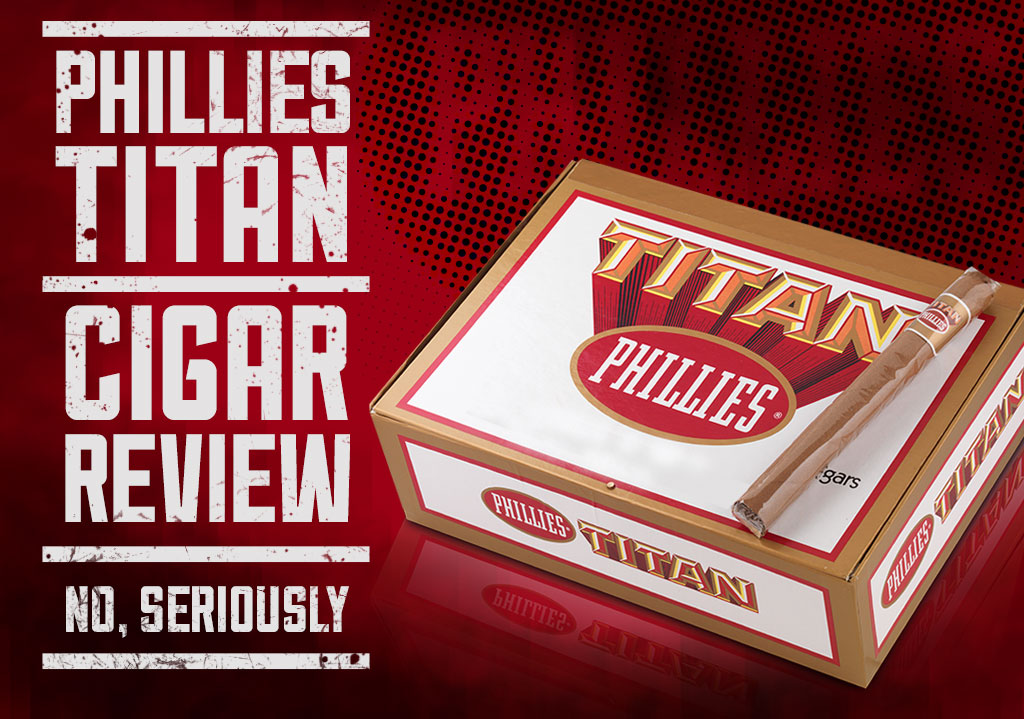 Phillies Titan cigars belong to a category variously referred to as mass-market, gas station, convenience store, or drug store cigars. Whatever you want to call them, the idea is that Phillies cigars and other similar smokes are cheap and widely available. It also means that they are not made with nearly the same quality of tobacco as premium handmade cigars like Padron, Fuente, or Davidoff.

With this in mind, I decided to grab a pack of Phillies Titan cigars and review them on their own merits.

If there’s one thing you can say about them, it’s that they’re consistent. This is especially true because the wrappers are made from so-called sheet binder, a homogenized tobacco product in which large quantities of tobacco are broken down and reconstructed into a sheet of “tobacco paper,” as opposed to an actual tobacco leaf, which has been cured, fermented, and aged.

The cigars are individually wrapped in cellophane and have a paper ring. The foot is straight, while the head is tapered and pre-punched, negating the need to further punch or cut for lighting purposes. The pre-light flavor is very mild with a slight sweetness on the lips and very little resistance on the draw.

Out of habit, I toasted the first cigar like I would before lighting a premium, but with subsequent cigars I found that there was no benefit gained by doing this. Phillies Titan, like other cigars in this category, are made with a proprietary blend of shortfiller tobacco which has been refined and processed, as opposed to typical premium cigars, in which the longfiller tobaccos are bunched together and smoked end-to-end.

The sweetness on my lips persisted but eventually waned. The flavor and aroma were both incredibly mild and vaguely sweet.

By the second third I found that I was over-smoking my Phillies Titan, causing a buildup of tars at the head. To counteract this I cut the cigar with a guillotine cutter and made a conscious attempt to smoke more slowly. Subsequent cigars demonstrated no tar build-up with a slower approach. I suspect that premium cigar smokers may be tempted as I was to smoke more quickly because they are accustomed to a firmer draw.

Although I did note a slight increase in the intensity of flavor and aroma, overall the cigar remained mild and somewhat sweet. It should also be noted that the Phillies Titan had a flaky .5-.75″ ash that tapped off and disintegrated easily enough, but did not readily fall from the end of the cigar.

Not much has really changed by the final third, again playing to the aforementioned consistency. While the cigar’s flavor and aroma continued to build somewhat, they still remained decidedly mild throughout the end of the cigar. The cigar’s burn line and burn rate were excellent, as should be reasonably expected of all such mass-produced cigars.

Phillies Titan is one of the better mass-market cigars I have smoked, and I would readily recommend it to mass-market smokers. They could also work for premium smokers who don’t mind a mild cigar, and are looking to stretch their cigar-buying dollar by getting some cheaper cigars in the rotation. Level your expectations – premium cigars they are not – but since they don’t require humidification, they could reasonably serve as an “emergency stogie” to keep in your car, golf bag, or bug-out bag. Hope you enjoyed my Phillies Titan cigar review, and if I can take a step outside my comfort zone, so can you! If you’re looking for a history lesson on Phillies cigars, check out their Wikipedia page – very informative!

I though this was an accurate and honest review; I would also put White Owl New Yorker in the same mix, but they must be smoked very slow.

Excellent review.it answered my question of whether they needed humidification or not.It was very informative and I agree with your assessment of them.i now know I also have been smoking them kind of fast.i know there are higher quality cigars but I enjoy this and I can afford them.i also like the thickness of them over other cigars of this type.i will now explore your site.
Thank you

Reading Time: 3 minutes Tired of the same old stuff in your humidor? Check out the latest and greatest new cigar and accessory releases at Famous Smoke Shop from Caldwell Cigar Company, Protocol, and Vertigo!

How to Spot Fake Cuban Cigars