The trend of injecting new life into legacy cigar brands with an artisanal touch has been a common theme the last few years. We’ve seen new lines from old flames like Montecristo, Romeo y Julieta, and H. Upmann. Saint Luis Rey is one of the latest to be revitalized with its new cigar, Carenas. 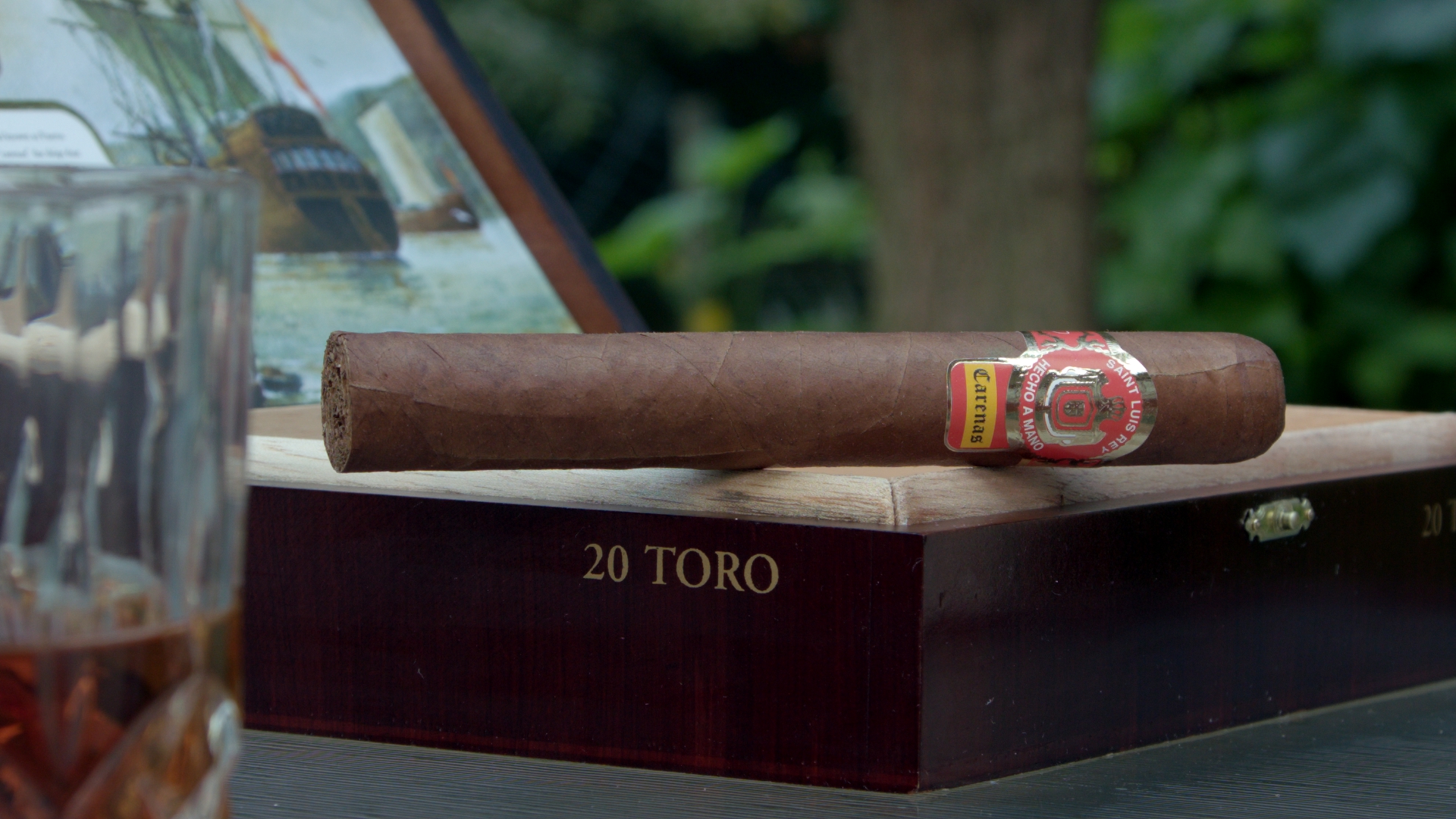 ‘Carenas’ gets its name from the early days of the tobacco trade. As the story goes, sailors from the North Atlantic Ocean and Caribbean Sea would fix their ships in the Puerto Carenas harbor — known today as the historic Port of Havana in Cuba. This port of call also served as a departure point for exports to Europe, including tobacco, and was instrumental in bringing cigars to the world stage. 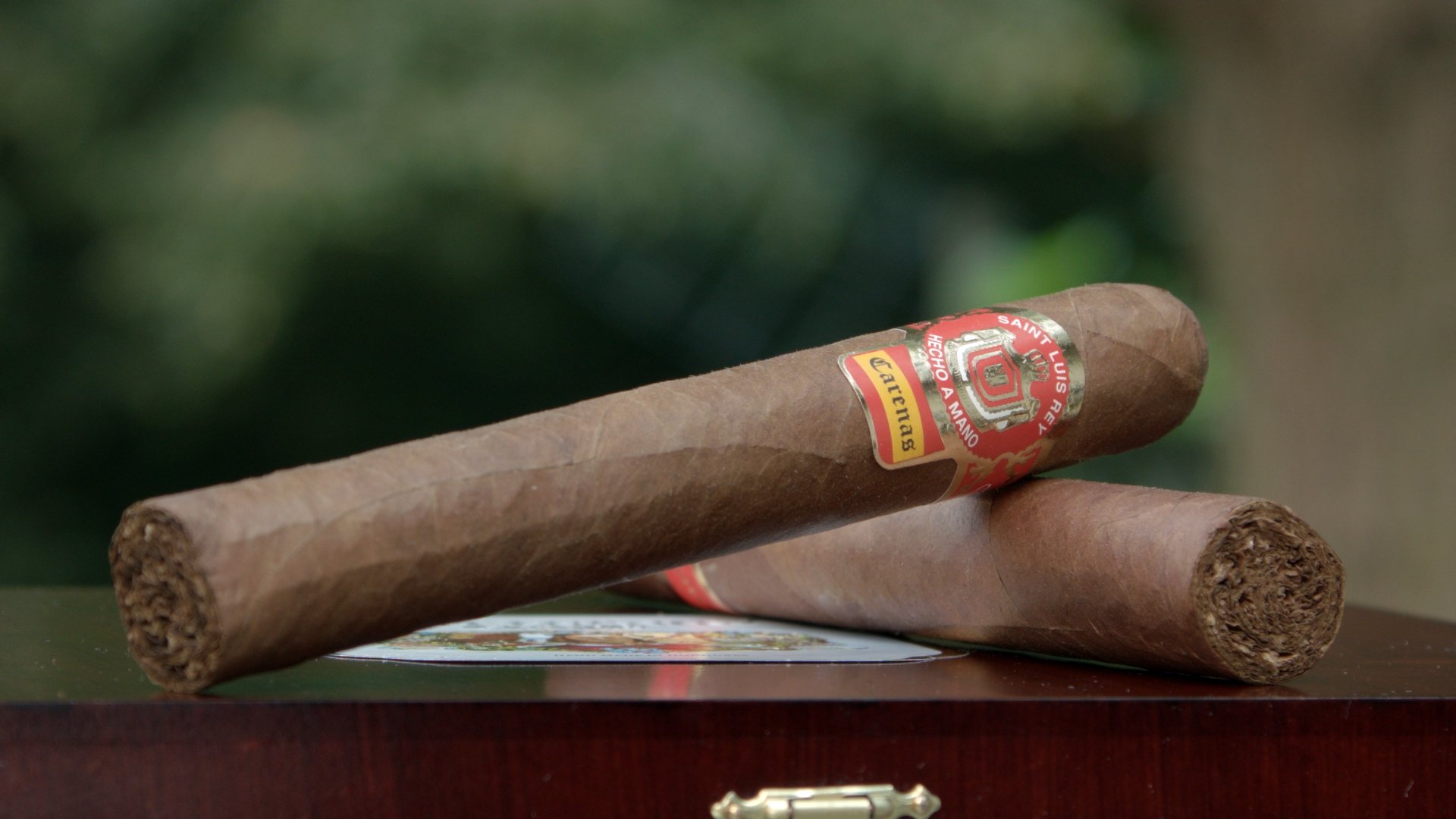 Now, thanks to the legendary hands of the Grupo de Maestros, we’re taking a peek at their tribute to the golden era of exploration and how it led to the birth of the premium tobacco industry.

As always, our mission isn’t to rate the cigar, but rather let you know what we liked – or didn’t – to give you a little direction on whether it’s a cigar that’ll be at home in your humidor.

Construction: Some pronounced veins; a little oily, a little toothy. Nice leather color.
Draw: Some resistance.
Pre-light flavor: Taste is cool and crisp, with citrus, leather and a little bite. Smells like a barn – wood and hay.
Toasting & Light: Wood with a background of salt, spice and citrus tang.
Base flavors: Citrus, wood, nuts, earth, pepper.
Retrohale: Some spice, some sweet. Then nutty and floral. Really good.
Aroma: Very pleasant, similar to the retrohale.
Burn & Ash Quality: Not the most even burn, but it stayed lit; ash is a very light grey and doesn’t flake too much (if you care about that sort of thing).

There’s a word for this Saint Luis Rey Carenas, but I’m having a time putting my finger on it. Maybe it’s dynamic. There’s a strong taste of wood, nuts and citrus from the onset. But these are the “breakthrough” flavors, the noticeable ones you can identify and write down. Hanging out in the background is this thick jambalaya of flavors – a little acidic sweet, dark chocolatey, nutty, hoppy – that takes up residence on your taste buds, and eventually settles its rich body in your chest. For the record, that’s full flavor, medium body, and medium strength. The second half shows even more of that citrus taste laced with pepper, then finishes earthy sweet.

With all of this intensity, I think the blend is much more refined than the makers let on. 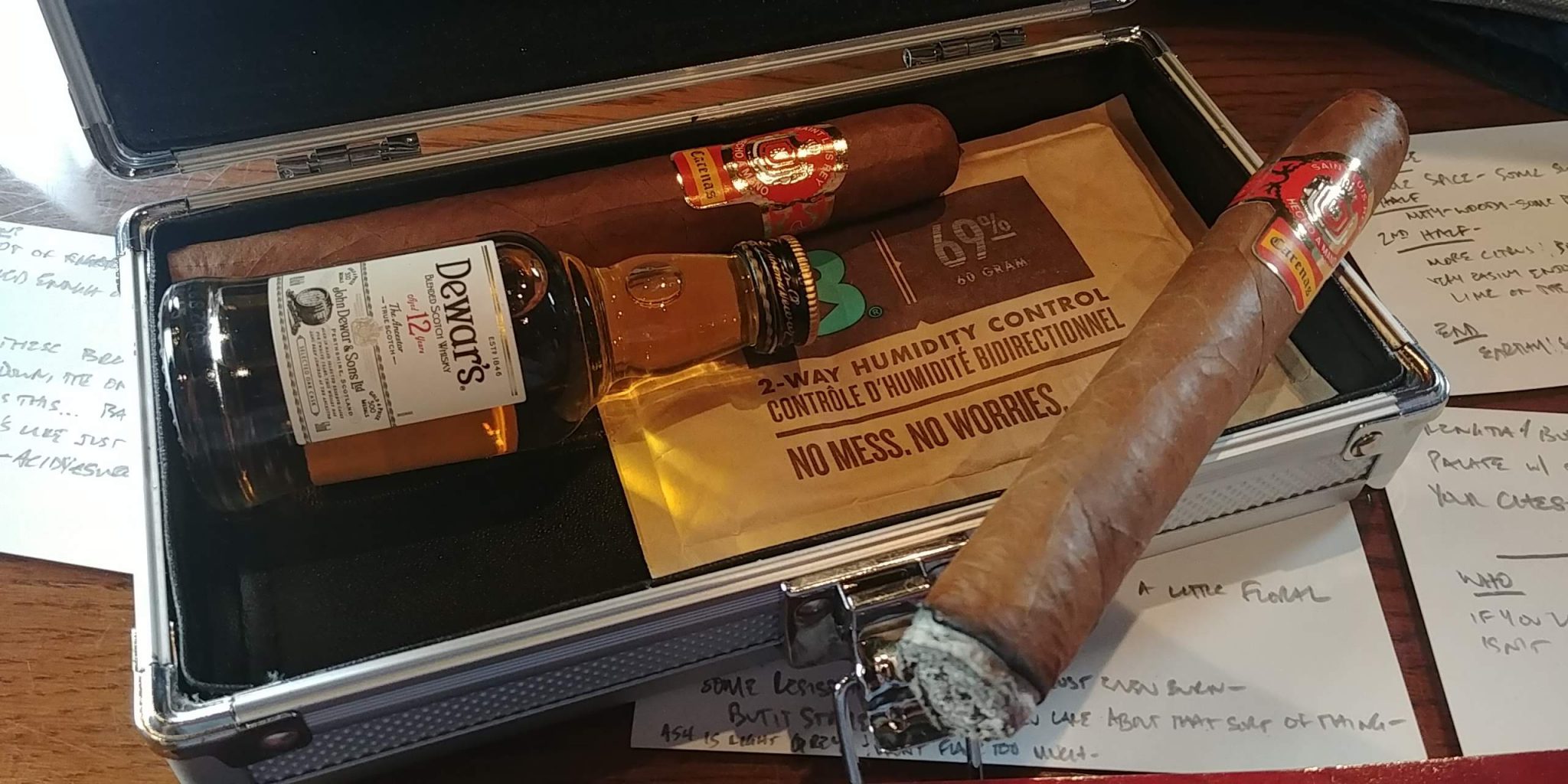 The unique taste makes a SLR Carenas cigar pairing a bit of a hit-or-miss affair. Fortunately, the makers recommended Dewar’s 12 Blended Scotch to go with the cigar, matching the Dewar’s dried fruit/citrus/vanilla notes with the Saint Luis Rey’s tobacco, spice and sweetness. Both are medium strength. No Scotch? No problem: mix a rum and Coke, rub a wedge of lime on the rim of your glass and settle in for satisfaction.

This was an enjoyable evening smoke for me…but will you enjoy this cigar? Well, if you’ve been getting turned on to fuller bodied, fuller flavor smokes, but been disappointed by the sticks that are just too peppery or spicy – I think you’ll really like this Saint Luis Rey Carenas because it has very little bite. So, if you’ve passed by SLR because you thought it was an old timer’s smoke, I encourage you to make a second pass – and pick up a couple of these Toros the next time by.

No expectations. I don’t know the last time I smoked a Saint Luis Rey cigar. And not for any reason other than with the huge cigar selection available to today’s customer, some brands get neglected.

When I lit the Saint Luis Rey, flavors kicked off with a light black pepper note—teetering towards spicy. And then, as if on cue, dark chocolate and caramel entered the fray. There are additional notes of cedar, baking spices—think gingerbread cookies here—and hay balancing out Carenas’ flavor profile. 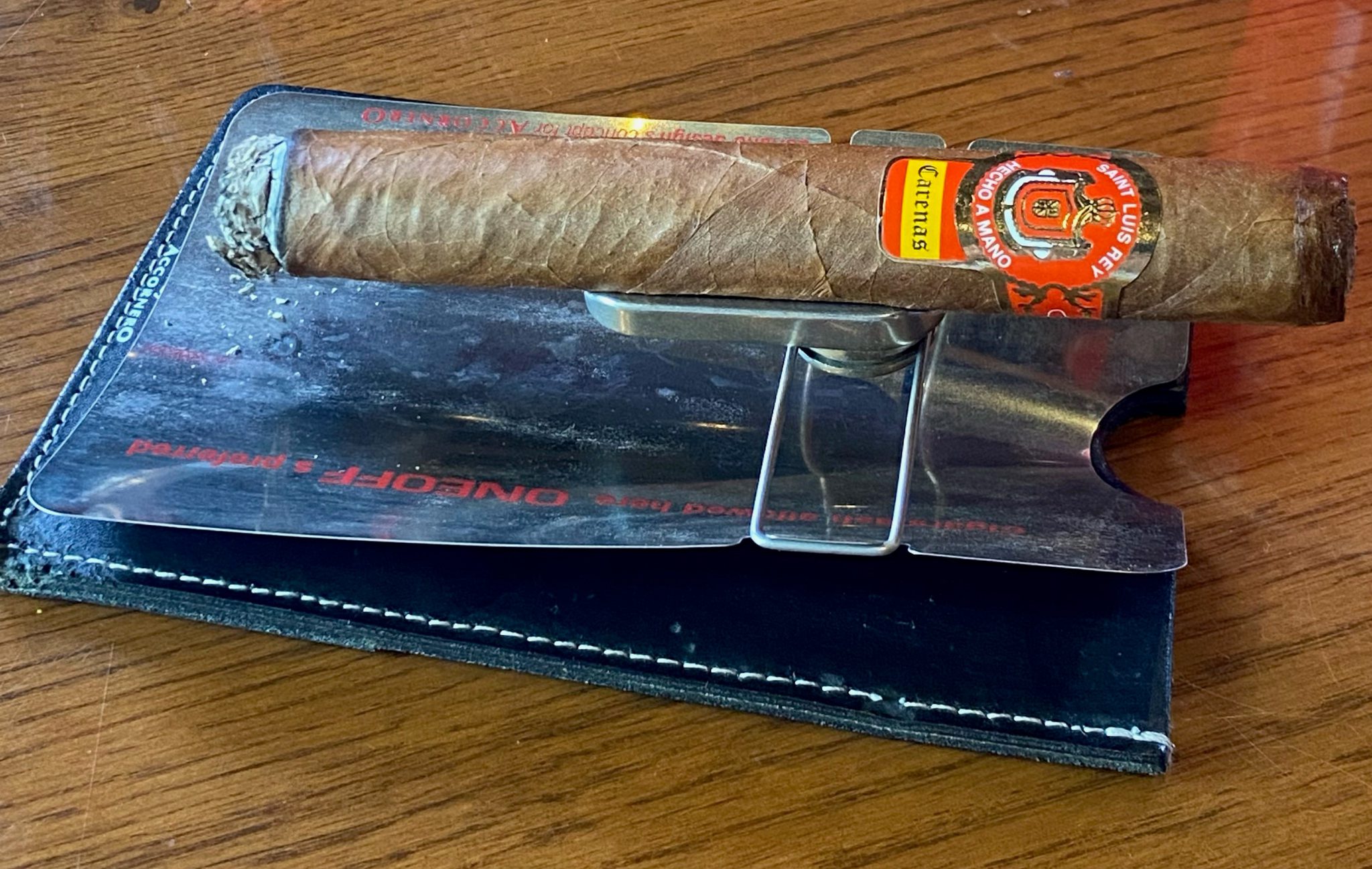 Now, I may be picking nits, but I wouldn’t go all-in and call Carenas a complex cigar. The complexity is there, but it’s subtle. And there are delicate flavor transitions. As in not a smack to the face, but rather, a pleasant surprise.

The Saint Luis Carenas is a medium bodied cigar that pairs well with a nice, dry, fruit-forward white wine. Think a crisp Sauvignon Blanc on a cool summer afternoon. Or try Rye on the rocks — we know Jared is fond of his Dickel — if you’re into the harder stuff.

I didn’t know what to expect. And that’s a good thing because it surprised me in the best possible way. Consider trying Saint Luis Rey Carenas—it’ll surprise you too.

Carenas instantly reminds me of a Cuban cigar. The well-aged kind that Kevin, our social media guy (and resident Cuban fanatic) always passes around. Whether that means the new guard of smokers – and their love for spicy complexity that could make an IPA blush – will love it? Hard to say. This might not be the Saint Luis Rey for them.

Seems the SLR blenders said “hard pass” to complexity when they set out to make Carenas. Admittedly, I love complex cigars. But there are times when I want to sit down and appreciate a smoke for what it is without putting it under a microscope. This cigar is perfect for that kind of smoking. After a particularly hard day, you can just light it up and escape for a while. 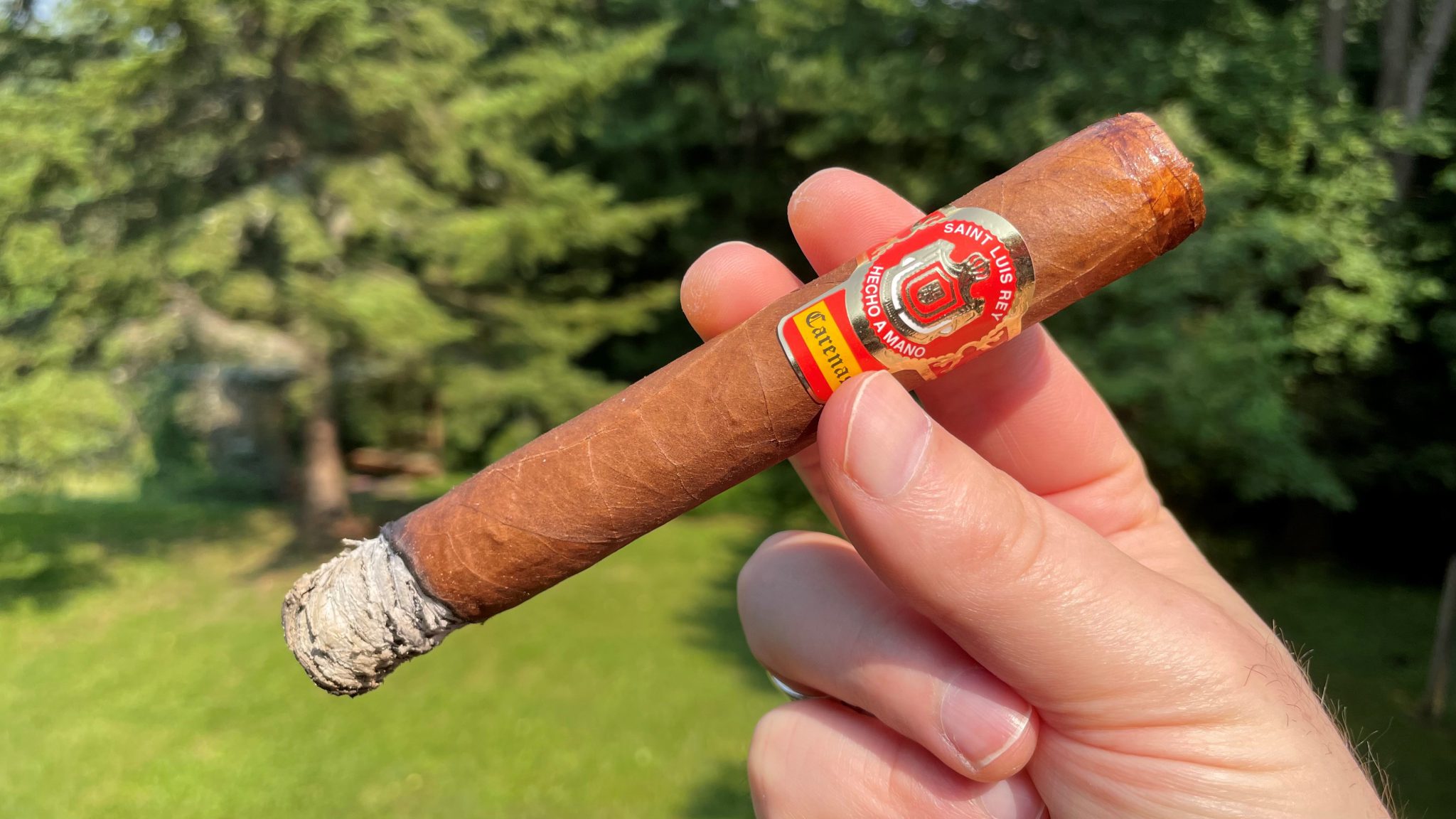 What Carenas lacks in plot is made good on by its flavors. There are only a few of them, but they’re really all you need. First – a blast of wood, spice, and smoky flavor upfront. Shortly after, the blend settles down and focuses on three primary flavor categories: wood, flowers, and veggies…all with a lovely aroma of roasted nuts and oak.

I mentioned aged Cuban flavors earlier – my Carenas Toro sample has the perfume-like finish that’s been prevalent in every genuine Cuban I’ve ever enjoyed. And it’s there consistently, from toast to tweezers. And let’s be honest. If you’re chasing Cuban flavor, an American market Saint Luis Rey will keep a lot of extra green in your pocket.

Construction: Cigar is really well made with an evenly colored and seamlessly rolled Nicaraguan wrapper. (I’m guessing Corojo.) The wrapper also has a nice oily sheen to it, and I found no soft spots. The cap is neatly done with a triple seam, and it clipped off in a perfectly round disc.
Draw: Just right.
Pre-light flavor: The cold draw flavors were kind of wheaty or maybe even bready, and a little sweet. Some nuts and leather were in there, too.
Toasting & Light: Pretty easy. No fouls.
Base flavors: Nuts, sweet tobacco, occasional flourishes of leather and earth.
Retrohale: N/A.
Aroma: Floral and sweet.
Burn & Ash Quality: Stupendous. Burn was even revealing a mostly white ash and a cone shape when tapped.

The first thing that arrives in these early, impressively creamy puffs is sweet tobacco and some well-defined nuttiness. The smoke itself was also especially creamy and sweet from the start while the body was in the medium range. With barely an inch burned, my Saint Luis Rey Carenas was pretty impressive, and we weren’t even that far from home. Then, I kid you not—for a split second I got a hint of cookies and cream. (Unfortunately, it never returned, but it was there!)

This Toro also gave off a nice aroma, sort of sweet and a little floral. It was hitting all the right notes for me. As the first ash began to form, it was quite firm with a very white color. When I ashed it I got that nice cone shape which told me the cigar was very well rolled. The ash didn’t roll off very easily, either. So, for most of the first section, the smoke was mostly nutty, sweet, and remarkably creamy. 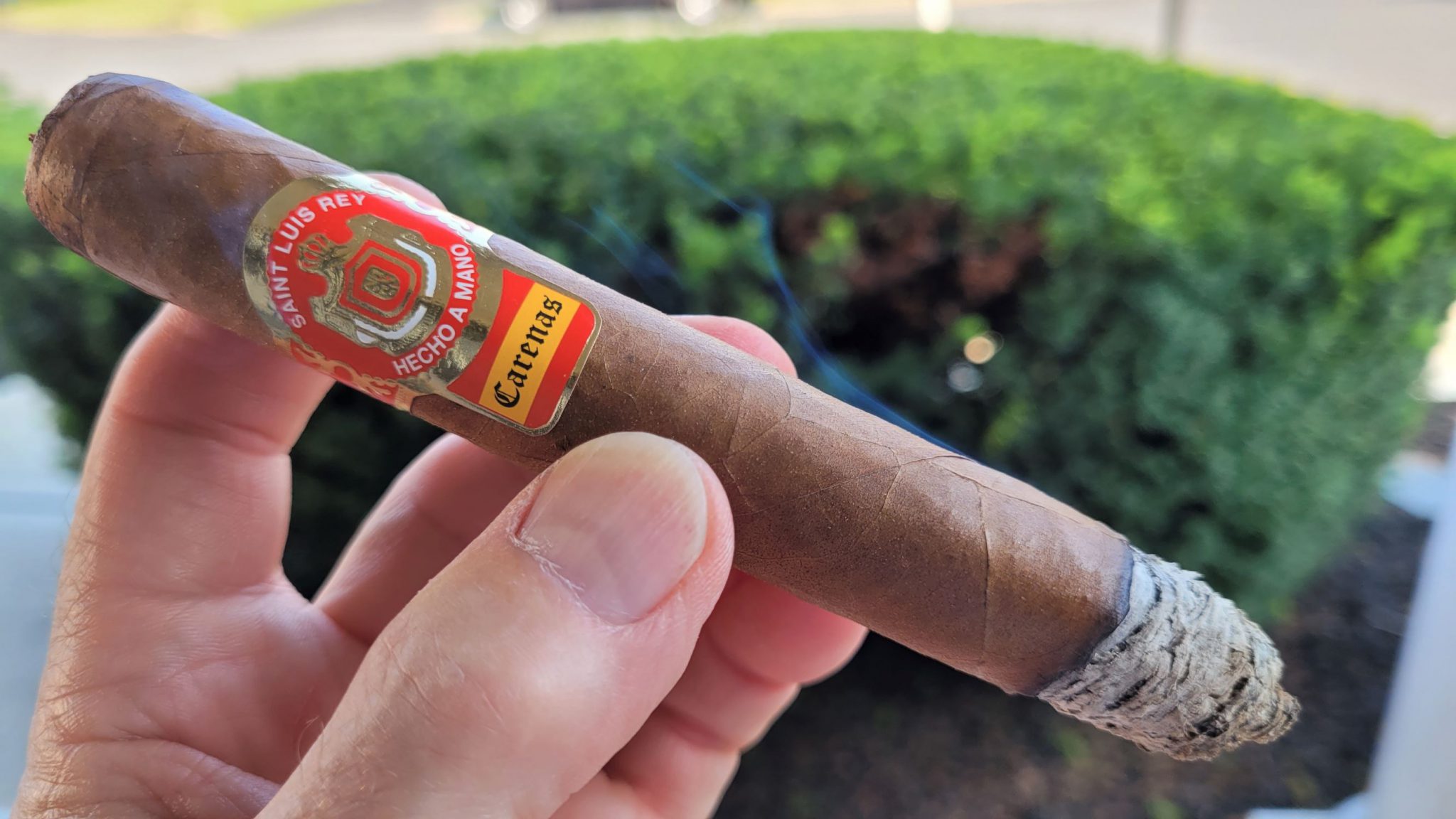 At the midsection, the flavors were pretty much the same; still creamy, nutty, sweet and perfectly balanced. However, it moved the needle in terms of body and strength. As for the core flavors, the nuttiness was the most dominant flavor with this underlying layer of creaminess that may even suggest the flavor of “sweet cream.”

During the last several inches the cigar transitioned to a bolder character. The core flavors were still there, but definitely more intense. Eventually, some dark, earthy notes began to bury the sweetness, leaving mostly the nuttiness and some leathery notes to continue. Even the aroma became a little sharper, but that layer of creaminess never dropped out. 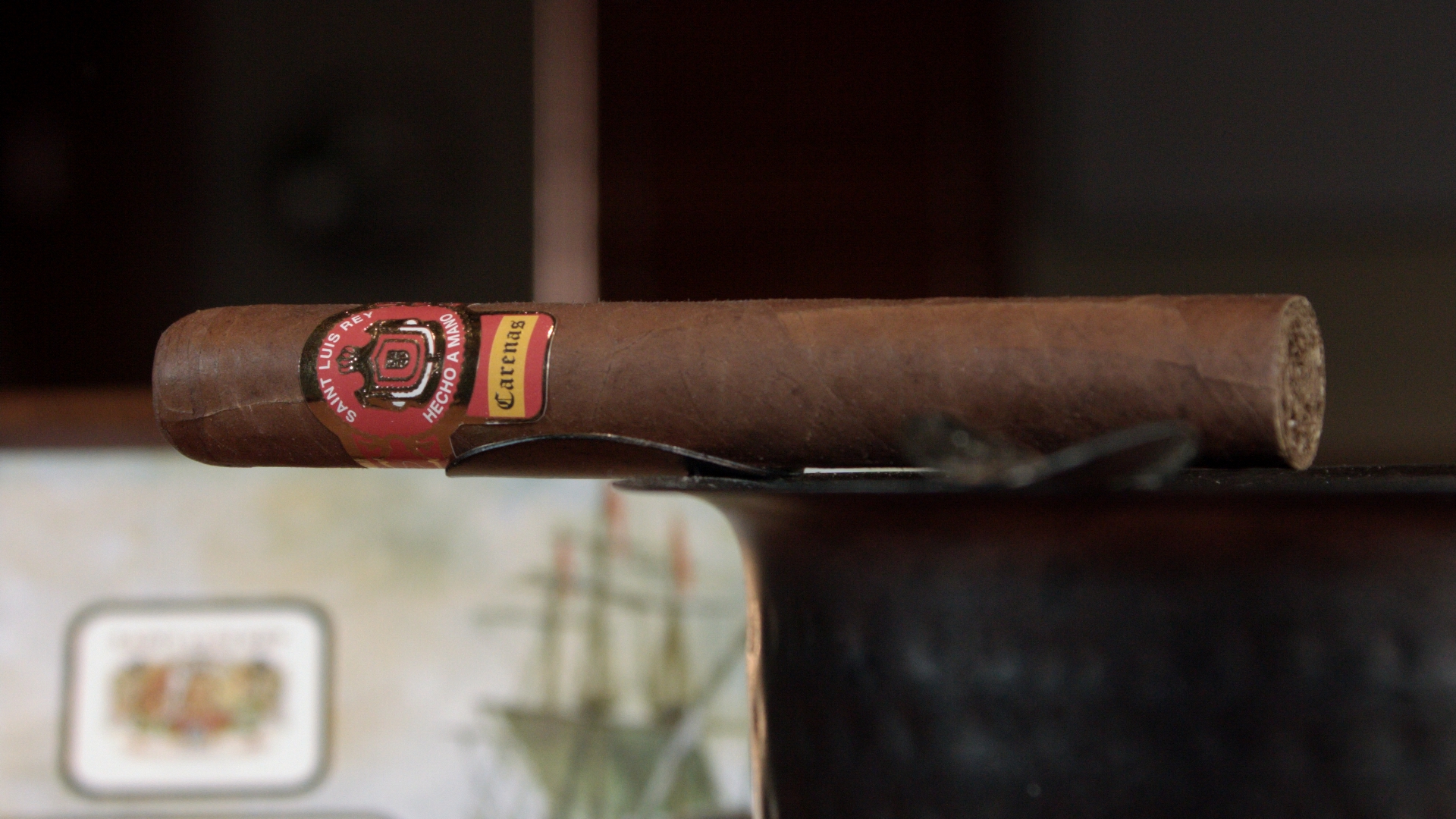 Saint Luis Rey definitely has a winner here. I’ve always liked this brand because I like Honduran tobacco. Add the Grupo de Maestros and you’ve got the makings of a potential classic. It’s a very interesting cigar, and I love the way it went with my iced coffee. (I’m sure it’s pretty fine with the Dewar’s Aged 12 Year whisky SLR recommends, but I haven’t gotten around to that.) You can tell they used some excellent, fully aged tobaccos in this blend, and the cigar is packed to the gills with it. And despite smoking it in some pretty humid weather, the somewhat spongy cigar smoked perfectly. I think it’s also fair to say that the SLR Carenas Toro has a fair amount of Cuban character going for it, too.

The only thing that made me go eh, was the band. I just think the little Spanish flag extension on band makes it look a little… let’s say, less expensive than the class act I thought it was. That said, it does come at a pretty fair price.

Suffice it to say, the SLR Carenas is a lot of cigar. Offer one to just about any cigar smoker and I’m confident they’ll like the taste. It’s not too overpowering, either, but those last couple of inches can be pretty heady so, as I usually say, take your time with it, let it smoke itself, and you’re really going to get a lot of pleasure from it.