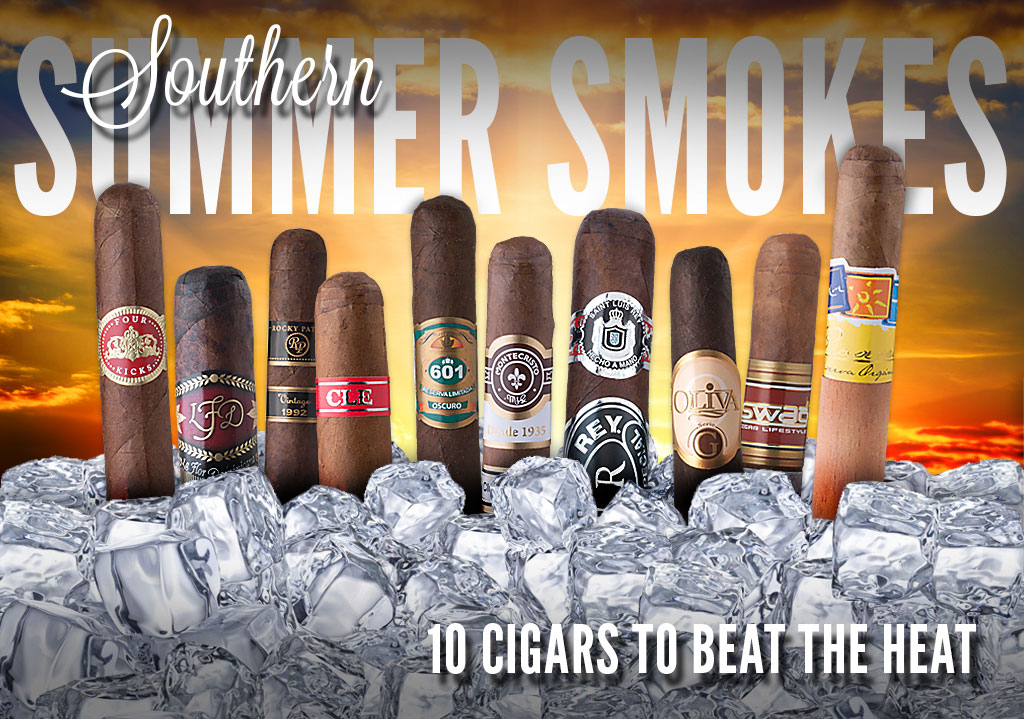 Small Cigars are Perfect for a Southern Summer

It has been brought to our attention by a reader named Chris Perry, that we’ve been neglecting the South during the summer – apparently it brings an ungodly heat that bears down upon Dixie with a ferocity similar to that of General Sherman’s fiery stroll through Atlanta. In other words, it’s damn hot. That’s why I’m giving you my Short Smokes for a Southern Summer: a list of 10 premium small cigars you can smoke in under an hour before you cook up in the sun like a plate of chicken fried steak and a side of biscuits.

But first, fair warning: our proofreader lives in Texas and reckoned (correctly) that after reviewing my draft, my grasp on Southern lingo is, at worst, atrocious – and at best, pretty far off. So I’d ask y’all to oblige this Yankee’s ignorance…my experience with Southern colloquialisms comes from a mishmash of Bugs Bunny and Yosemite Sam cartoons. Throw in a week in Cajun country, and we have a recipe for a complete obliteration of my understanding of Southern lingo. And while I won’t apologize for my attempt to connect with brothers and sisters of the leaf outside of my geographical location by way of words, I can say that Chris brought up a good point – up here, we never thought about how it’s the same kind of problem (but in reverse) for you folks closer to the equator. Hopefully that clears up any questions as to why we’re always fixin’ to do articles about short cigars for Winter, rather than focus on small cigars for a Southern Summer. It gets airish for a long spell up here in the North. Real airish. So, without further delay, here is my list of Short Smokes for a Southern Summer, and a sorry attempt at connecting with our Southern friends. But as they say, “Every dog should have a few fleas.” You say that, right?

Montecristo Desde 1935 cigars come from the highly regarded Tabacalera de Garcia in La Romana, Dominican Republic, and is perhaps the best of the small cigars in the Montecristo lineup. Blended by cigar guru Jose Seijas, this fun-sized stogie is made with Nicaraguan and Honduran longfillers, a Nicaraguan binder, and a luxurious Ecuadorian Habano wrapper. It’s perfect for sitting on your front porch with a pitcher of sweet tea where you can really relax and enjoy every nuance from each puff of this outstanding smoke.

[Ed. Note: Montecristo Desde 1935 cigars are no longer in stock at Famous Smoke Shop; click the image to view other Montecristo cigar options.]

Introduced in 2003, the LFD Double Ligero line of cigars has been a mainstay in stogie lover’s humidors for over a decade now, and their popularity keeps soaring to new heights every year. Maybe that’s due to the extreme flavor that pours out of this Dominican longfiller cigar with an Ecuadorian Habano wrapper; or maybe it’s due to the fact that this little spark plug puts out enough power to light up Austin. All I know is, this is a dominant cigar through and through. Old school and new smokers alike love it for its supreme craftsmanship and old school taste with a modern spin.

Family heritage is important to any self-respecting family. Nobody knows this better than Christian Eiroa, the former head of Camacho cigars. After he sold Camacho, he decided to get back to his roots with a new venture under the name CLE to utilize tobaccos found on his family’s farm in Honduras. For generations, the Eiroa family has tilled the soil and blended cigars for the masses to enjoy, and these CLE small cigars are near the pinnacle of this family legacy.

They don’t call the Special G “Special” for nothing. Blended by the Oliva family and utilizing their farm to table ideology of rolling cigars, the Special G has a medium bodied flavor for all smokers to enjoy. Mild smokers can make the upgrade without being overpowered, and full bodied smokers go to it without sacrificing much in terms of strength. The end result is a perfecto shaped cigar with a rich lineup of flavors – and a smoke that’ll have you forgetting the sun feels like it’s but a mere 20 feet above your head during the Alabama summer.

SWAG in this case stands for Southern Winters Are Glorious. Not really, but I’m pretty sure when the weather gets hot, every Southerner says this at least once. SWAG cigars come courtesy of Rafael Nodal of Aging Room cigars, and are known for their medium to full bodied complexity. Almost every flavor on the charts can be found in this little smoke bomb made of all-Dominican tobacco. It’s a sure bet to cool you off with some killer flavor when the mercury runs faster than the Mississippi after a storm.

If you’ve ever been to New Orleans, it’s a must for any respectable tourist to go to Café Du Monde to grab some beignets and chicory coffee. It’s a tradition that’s been running since 1862 in the historic French Quarter. But the only thing that would make this Southern (tourist) tradition better would be a historic cigar to go with it. Enter: Saint Luis Rey. Founded in Cuba in the mid-50s, Saint Luis Rey cigars hold their place as the authority on old school smokes with a flavor that, like the beignets at Café Du Monde, simply cannot be replicated.

Nothing beats a good ol’ rodeo. Cowboys and cowgirls bucking on a hopped up bull or bronco gets the heart pumping and the crowd cheering. But if you fall off, chances are you’re bound to get four kicks. That’s why I’m putting a pain-free Four Kicks on my list, the Corona Gorda. Instead of getting trampled while others cheer, laugh and point, you can kick back and take all four kicks of incredible flavor, complexity, strength, and construction straight to the face without injury. Because what’s worse than being stuck in a Southern summer heat wave with a hoof mark on your head? Nothing, that’s what.

Going back to the theme of tradition, Rocky Patel is here to make a strong case to make these Vintage 1992 Petite Corona your official summer small cigars. Using a minimum of 5 year aged Dominican and Nicaraguan filler tobacco wrapped in a luscious 1992 crop Sumatra wrapper, this stogie is the epitome of a properly balanced cigar. It has a medium body as to not overpower its beholder, and a flavor as rich as a legendary Georgia peach.

As the old saying goes, fight fire with fire. And there’s no better cigar to beat the heat than this exquisitely strong stogie. Touted as being an unassuming bomb of strength, this covert cigar sneaks its way into your humidor and blasts you away with intense flavor and a punch of strength from start to finish. It’ll have your taste buds boot scootin’ up and down the block in no time flat, and you forgetting about this pesky little heat wave.

America came into its fortune in part due to its vast, fertile land to grow what historians determined to be “a shit ton” of crops. And since there were no chemical sprays back in the beginning of our nation’s history, every crop was 100% organic! So I’m taking us back to those good old days in Virginia, Kentucky, and Tennessee where tobacco farms sprawled across the land, and grew only with the help of sun and soil. Deemed the only 100% organic cigar on the market, Plasencia Reserva Organica cigars offer flavor out the wazoo, courtesy of a lush sun grown wrapper. If you aren’t a fan of the organic craze sweeping the nation, we’re sure this short smoke will change your mind.

So there you have it! Ten small cigars that you can smoke in that insane summer heat the South has going on right now. Each one is perfect to enjoy some time outdoors this summer, and short enough for you to scamper back inside without the sun turning your backside medium well. Smoking cigars shouldn’t become a chore in adverse weather, but it also doesn’t mean we should suffer through a cigar. Enjoy responsibly, and stay cool down there.

Finally someone addresses my love of the Finally someone addresses my love of the corona. Summers are hot here. I pull a floor fan out during our 95+, 100% humidity and 0 breeze days, which are many. Just becomes miserable to spend an hour with a cigar no matter how good. Since I live in NC I get many cold, blustery days too. Nothing like NY or ME but for us it’s cold. Any cigar that takes longer that 29-30 minutes becomes a chore. The corona sized smoke is just right for those days. I just wish there were more of that size out there.

Living in the swamps of Florida, I’ve noticed not so much the heat, I’m used to it…but the humidity really takes its toll on the cigar. What would normally be an 1.5 – 2 hour smoke gets cut short because the cigar gets “soggy” and hard to keep lit, and just starts tasting bad.

Swag Quickie is not available on Famous site, as far as I could tell by two searches for it. It would be great if you’d include the measurements of each vitola in these kinds of articles.