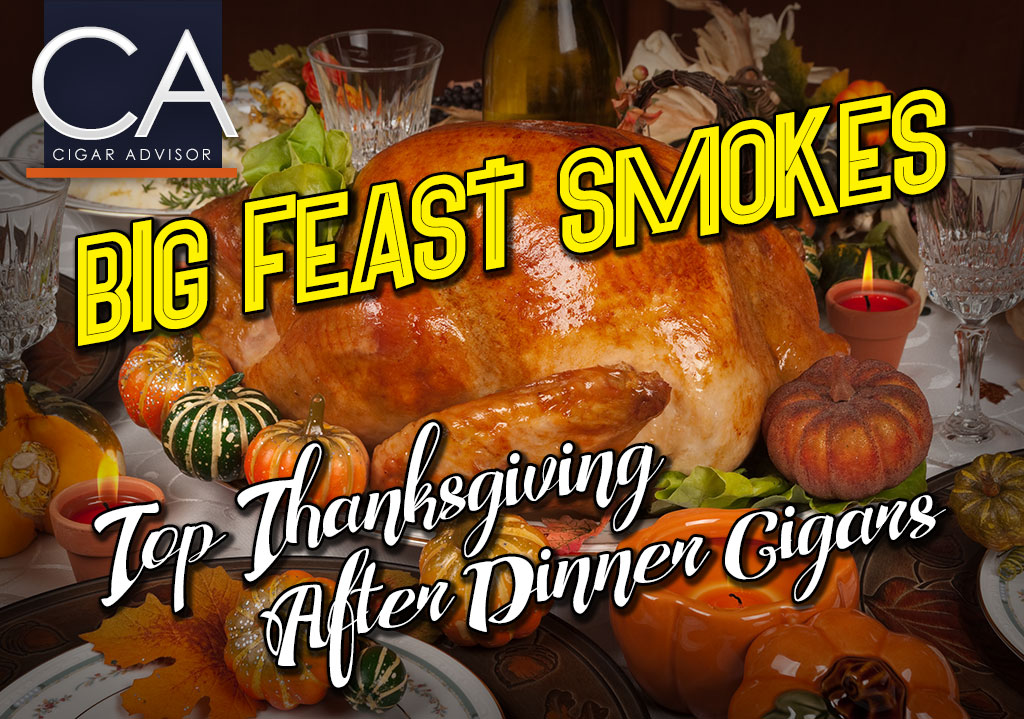 There is nothing subtle about eating Thanksgiving dinner – at least, not in my house. If you were to narrate the Pullo Thanksgiving story, it would end with, “And my belt grew three sizes that day.” It might be simpler, and more comfortable, to just wear sweatpants.

We eat like Vikings: it starts with my nephew, relishing in his chief executioner role, who conducts a very ceremonious beheading of the turkey butter sculpture. The clanking of glasses and the clattering of plates lasts an hour; by the time we finish, the turkey – once plump and juicy, with a lightly browned-and-buttered skin – is a carcass that looks as though it has been savaged by a pack of wolves. Then, the sweet spot…between the serving of coffee/bourbon/football and a tryptophan-prompted coma, is the perfect time for my after dinner smoke. And today, I’ll do my best to offer up a list of potential “best-of” picks for what to enjoy.

As we work our way through these after dinner cigar options together, you’ll see that I often mention a booze choice to go with it – that of course is optional, but I find that an adult beverage not only soothes my overfed belly better than any Tums ever could, it also helps dull the drama that inevitably surrounds the crowded dinner table at a holiday. My family is a collection of insane people. Don’t judge. Just consider having one of these cigars on Thursday:

Dark meat fans, rejoice: your after dinner cigar has landed. The Nicaraguan and Honduran tobaccos land a full-fisted punch of flavor that’s a little darker, while the oily Maduro wrapper makes it a little sweeter – and in true AJ Fernandez form, a big dash of pepper to top it all off. If you’re looking to chase your turkey dinner with a cigar with a big bite, this maduro edition of the Oval is right up your alley.

A post-meal smoke doesn’t need to be heavy and full – take the San Cristobal Elegancia, for example. Though made at My Father in Esteli, this San Cristobal relies less on the Pepin pepper and more on smooth and creamy – well-aged Nicaraguan tobaccos are at work here, and an Ecuador Connecticut-seed wrapper rounds out the recipe. Because you didn’t overstuff, you saved room for Aunt Judy’s strawberry tart and coffee; that’s good news, as the medium-bodied Elegancia goes great with both.

One of the finest giblets in the Padron coop, there is much about the Serie 1926 for which to give thanks. This chunky robusto features luxury-class tobaccos all around, with the fillers aged a full five years; the Habano wrapper, up to twice as long. But holidays are special, as is this one-off anniversary cigar that burns rich with earth and spice and espresso – the box press is a bonus. This Padron F75 is a nice full-bodied eye-opener, and practically necessary to help combat your turkey-induced narcolepsy.

As after dinner cigars go, the Oliva Serie V has been a tableside staple: meaty and stunningly full bodied – and highly rated, to boot. Brimming with zesty Jalapa-grown ligero under a sun grown Habano wrapper, this fat Churchill is designed to be savored for well over an hour. Wash it down with two fingers of scotch, and let it convince you to sneak back into the kitchen and raid the fridge for leftovers in about an hour or so. It may even persuade you to talk politics at the dinner table with your crazy-opinionated and often volatile Uncle Jack. Even though you know you shouldn’t. Exciting and satisfying; this is how Serie V parties.

There is something time-honored and traditional about a Montecristo after dinner; and in the spirit of celebrating with family and friends, this is the day to up your Monte game with the White Vintage. essentially a Toro in size, the stuffing is a Dominican (of course), Nicaraguan and Peruvian base, topped off with a buttery Connecticut Shade leaf from 2008. White Vintage may be much lighter in body than all the other cigars on this list, yet remains very satisfying as an after dinner cigar pick – especially when someone trots out a fluffy, sweet ambrosia for dessert.

“I just can’t eat another bite,” you said. “I’ll explode,” you said. “I think I’m starting to sweat.” This is because you ate Thanksgiving dinner like a prisoner who just got paroled. We’ve all been there; it’s time to send in the Norteño. This Willy Herrera/DE smoke is a Nicaraguan-Honduran blend under a sweet n’ oily Mexican San Andres, and robust flavors abound. Best advice? Take a 30-minute breather after cleaning your plate and light one up over a coffee or an adult beverage; it’s an equally-great match for either. Then, crack the wishbone and wish for a full box.

There is something eccentrically magical about the yam; it only seems “right” when served at Thanksgiving. The yam peaks at the right time, and so does this 45th Anniversary commemorative smoke from Joya de Nicaragua. And this Joya Toro has the sauce: the Cuatro Cinco recipe is centered on oak barrel-aged Nicaraguan tobaccos, with an aged ligero that the JdN folks were holding onto for just such an occasion. A great pick if you want an after dinner cigar that smokes brilliantly full and sturdy, with ample flavors – but not as dark as the Antaño or dark Corojo.

It’s potent, alright – a full bodied finishing touch to a meal. Made with a Dominican/Nicaraguan long filler core, the Intemperance Whiskey Rebellion binder – an Indonesian leaf – adds a touch more pepper and spice to the already-biting Ecuador Habano wrapper, culled from a very high priming. I can easily see this super-sized robusto enjoyed alongside the burn of a hearty red wine. There are many dark and savory layers to the Whiskey Rebellion’s flavor…they’re a very satisfying finish as you empty the last few drops of that red from the bottle, loosen your belt and sit back with this cigar in hand.

With the Laranja, it’s time to count your blessings – which includes Espinosa’s pick of a Brazilian Bahia wrapper. Oh, so smooth. It’s an extraordinarily uncommon pick for a wrapper, but what gives the Laranja (“orange” in Portuguese) its name – much like a Rosado leaf has a red tint, the Bahia is a little orange-ish when the light hits it right. The smoke is thick and creamy with citrus and cedar notes, along with just a touch of spice, kind of how a REAL home-baked pumpkin pie has that slightly spicy bite. But what really stands out is the Laranja Reserva’s enticing aroma, which will probably send your senses into overload alongside a fat meal like this. Admittedly, the Volta is a little skinny for a Toro – so call it your toothpick and put it in your teeth for a look of after-dinner bliss.

Sobremesa is a cigar that’s practically built for Thanksgiving. Lemme set the scene: the turkey takedown is done and every single dish on the table has been decimated, save for two spoons’ worth of mashed potatoes, a few slices of dark meat and the rutabaga, which has gone untouched (again – no one even knows who made it, or how it got there). At this point, you’re letting out a deep, indulgent exhale. This is sobremesa, when your guests lean back, pour another glass of something and have an after dinner cigar. DT&T’s Sobremesa allows you to indulge a little more, with a very diverse and complex blend; standouts include PA Broadleaf ligero, a San Andres binder and an Ecuador Habano capa. Deeee-licious.

Solera is a serious wine nerd term, sort-of round robin way of combining portions of older and newer vintages for a consistent, perpetually-aged wine (Google it, it’s really in-depth). This kind of winemaking is prevalent in Spain and Portugal, mostly in dessert wines; Glenfiddich 15 Year Single Malt does it too. Aging Room’s Rafael Nodal applied the method to aging and blending tobacco leaves, aiming for fuller flavor and complexity…jackpot. Dominican Habano tobaccos of varying vintages are combined under a DR-grown Corojo wrapper for a medium-full thrillride of flavor that could stand as dessert on its own.

Ladies and gents, the horn o’ plenty is full with great options for the best Thanksgiving smokes. I’m sure I missed more than a few, so comment below with YOUR pick for the after dinner cigar you’ll enjoy this Thursday!

Reading Time: 5 minutes According to the press release, this blend is RP’s “greatest masterpiece ever.” And it just may be, as it’s already garnering “outstanding” scores from some in the cigar media. What did our reviewer have to say? Read and watch the video now.