Since May, we’ve reviewed nearly 30 blends in our Top New Cigars series. Big brands. Boutiques. Newcomers. Fresh takes on old favorites. Seems like we had a little bit of everything! That’s why we were issued a challenge: whittle that long list into the 10 best new cigars of summer 2022. Challenge accepted. 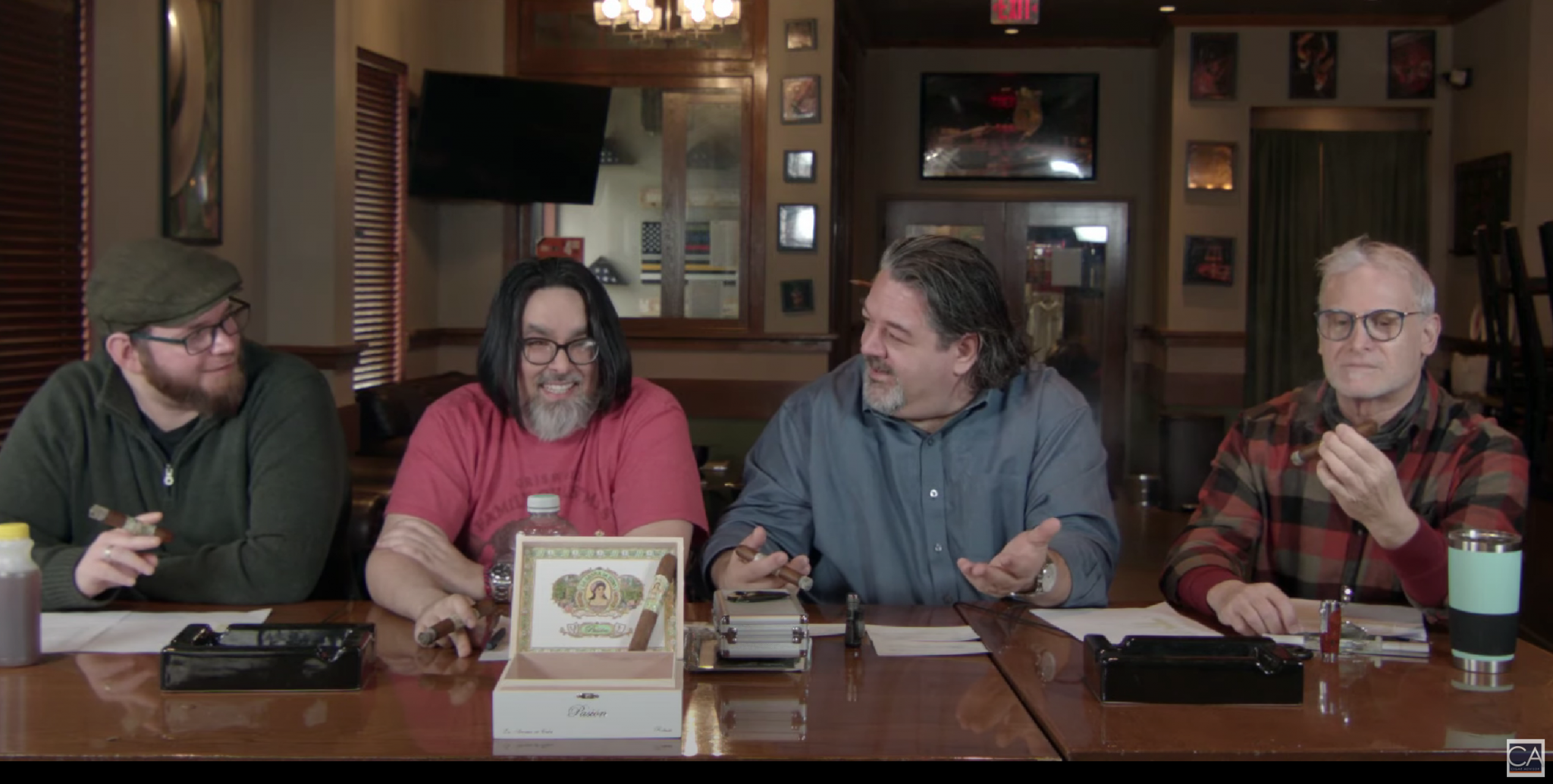 But why now, you ask? Summer’s just about over.

Because it’s not over yet. T-shirt weather exists in a large part of the United States through the rest of this month and a decent chunk of October. And when it isn’t, a trusty sweater or hoodie will keep smoking cigars outdoors pleasant well into the foreseeable future. Our time is what we make of it. We intend to enjoy it.

Furthermore, there may be a few cigar releases you missed here and there. Between hybrid work schedules, gas prices going full FUBAR, and a rush on recent vacations, the past few months have been a little crazy to say the least.

A little advice: unwind with a great cigar and a few friends while the weather is still cooperating. But which cigar? Our list of summertime best picks is here to help you choose and includes brands like CAO, Steve Saka’s Dunbarton Tobacco & Trust, Davidoff, Crowned Heads, and more. Dive in while the water’s still warm and tell us about your favorite summer cigar release in the comments below!

First released in 2014, Chogui cigars were initially only available in the Dominican Republic. But, as with all good things, word spread, and the cigar began popping up in the U.S. and caught fire on social media. Then about as quickly as they came on the scene—Chogui disappeared. Thankfully, all that changed this year with a re-blend and distribution now handled by Kyle Gellis of Warped Cigars. And, once again, this little brand that could is making some Tsunami-like waves in cigar social media circles. With an inviting Corojo sweetness, leather, earth, and wood, topped with a hint of citrusy spice—Chogui Dos 77 is an approachable premium that’s perfect any time of day.

Crowned Heads released their annual Las Calaveras Edición Limitada cigars for the summer of ‘22. The most distinguishing feature of these Nicaraguan puros this year is the Nicaraguan Corojo Oscuro ’99 wrapper. It’s “a flavor profile reminiscent of the signature My Father style of delivering classic Nicaraguan structure and intensity while retaining complexity and balance,” says Crowned Heads’ Jon Huber. Medium-plus in strength, the cigar issues a virtual buffet of roasted nuts, pepper, earth, leather, coffee, cocoa, and wood. Las Calaveras EL 2022 is a special treat that should not be missed.

Davidoff went all-out this summer for their Davidoff Limited Edition 2022 cigar stating, “the sweetness of Escurio, the intensity of Nicaragua, and the complexity of Yamasá merge into a unique, undreamed-of experience.” They may be right. Starting with a plush Ecuador wrapper, they’ve blended some really amazing tobacco into this full-bodied, 5½”x58 Gran Toro: Brazilian Mata Fina, Nicaraguan Estelí & Jalapa, and Yamasá Dominican for starters. The result is a creamy, layered, and complex cigar with notes of leather, coffee, cedar, nuts, and dark chocolate. A bit pricey, but for that special occasion, it’s off the hook.

Stubborn Fool is the first cigar in Diesel’s new Fool’s Errand trilogy and arrives with a Tarot card with a QR code that launches an interactive game (with prizes). But the star of this show is the cigar. Crafted at AJ Fernandez’s Nicaraguan factory, Stubborn Fool is dressed in a dark and oily Connecticut Broadleaf maduro wrapper over a Honduran binder and long fillers from Nicaragua and Honduras. A full-bodied journey with flavors of nuts, dark chocolate, cinnamon, wood, earth, and strong black coffee awaits those daring enough to embark on this ‘Fool’s Errand’.

Timeless Panamericana was originally an exclusive cigar for the Nat Sherman Townhouse in New York City before being offered only by retailers belonging to the TAA (Tobacconists’ Association of America). Thankfully, this classic favorite—with the same winning recipe—is  now available to the masses under the Ferio Tego banner. Panamericana  is medium to full bodied and teeming with rich flavors including pepper, cedar, leather, wood, and caramel sweetness. Make the time to take this timeless classic for a stroll.

A follow-up to Vieja Cosecha No. 1, this latest HVC release follows a similar course. Made in Honduras, and using Nicaraguan AGANORSA tobaccos from 2010, this blend showcases aged fillers with a rounded character. Complex and smooth out of the gates, there are notes of graham cracker, white pepper, salt, espresso, cedar, and earth present throughout with some cocoa popping up in the final third. Instead of hitting you all at once and with a ton of power, the flavors progress and are subtle and intertwined in such a way to keep you entertained and wanting more.

Created exclusively for The Owl Shop in Worcester, MA, Steve Saka released this “spellbinding” liga to all this summer with The Owl’s blessing, and are we glad he did. Dubbed ‘The Bewitched’ for its captivating profile, this exquisitely crafted cigar boasts a diverse Nicaraguan filler core bound in a proprietary Cultivo Tonto San Andrés Negro leaf and rolled in a Grade 1 Ecuador Habano Seed wrapper. The result is an astonishingly creamy, medium-plus smoke that imparts layers of cream, brown sugar, cedar, espresso, and spice. In true Muestra de Saka form, The Bewitched is truly a dream cigar.

Plasencia Cosecha 149’s name tells you exactly what’s in it. Cosecha translates to “harvest,” so this cigar spotlights the 149th harvest of the Plasencia family. Cosecha 149 is a Honduran puro that uses tobaccos first harvested in 2014 and set aside and patiently aged, waiting for the right project. This cigar delivers ripples of flavors including coffee, black pepper, gingerbread, cedar, dark chocolate, and cream. Plasencia Cosecha 149 is a rich, complex, and engaging cigar that is worthy of any big celebration.

Southern Draw is among the best at crafting spicy, full-bodied cigars. Yet for the cigar smoker who wants something a little more mellow and straightforward it’s their 300 Hands Connecticut line. An attractive U.S. Connecticut wrapper envelops a peppy Peruvian binder and Nicaraguan fillers. Adding a touch of elegance to the line this summer was a slim new Lancero. The medium-bodied smoke is creamy as butter and chewy with well-defined notes of tart fruit and nuts underscored by a layer of pepper. Ideal for a stimulating après dinner session with a good bourbon.

Could you supply ring and length for these? Thanks.

Click on the “Buy It Now” button. That takes you to the Famous Smoke site and the information about each cigar.

I like the 300 Hands lancero pick. I did not know about this vitola. This might be an intriguing value choice for afternoon sessions.

Reading Time: 8 minutes With names like AJ Fernandez and “Jochy” Blanco responsible for the blend, expectations are high for our San Lotano Dominicano cigar review. Watch and read the Cigar Advisors’ take on this full-bodied primo now. . .