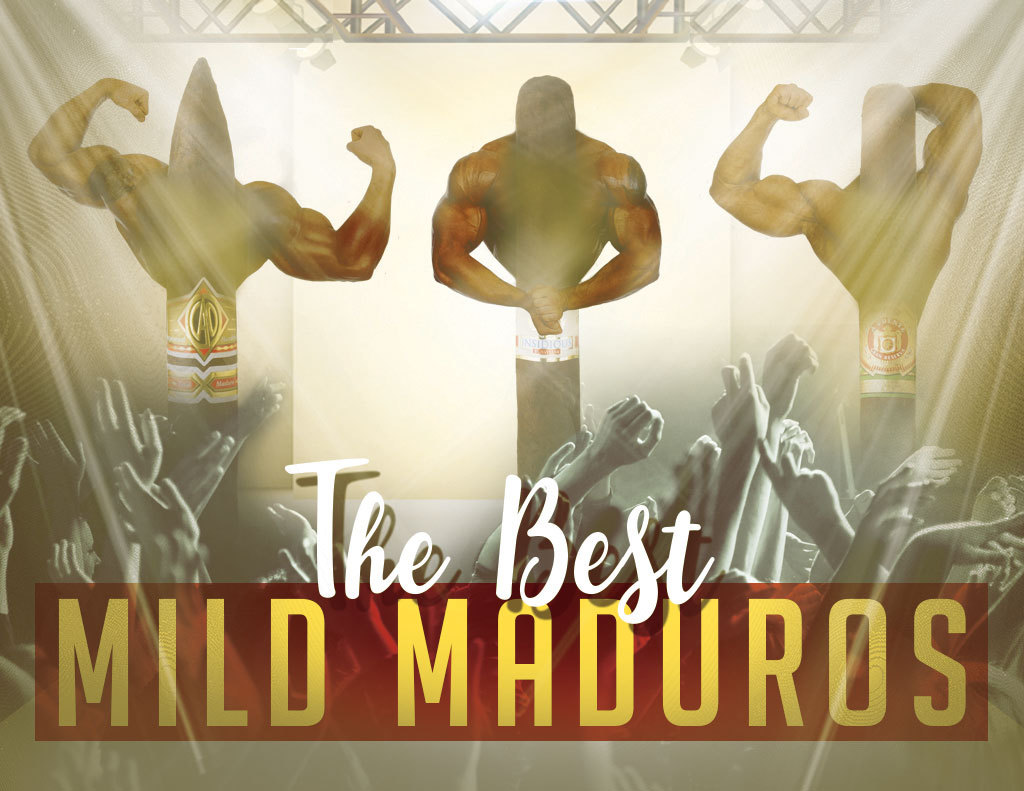 The Top 10 Mild Maduro Cigars You Should Be Smoking

You’ve seen and heard us say it over and over…Maduro is not a strain of wrapper leaf, it’s a color; and it means “ripe,” in Spanish. And for that leaf to become Maduro, it all starts with the particular kind of tobacco and where it’s grown; then, how it is fermented. But is there such a thing as a mild Maduro?

Are Maduros and other dark cigars stronger?

You’d think so, given what you (probably) know about light vs. stout beers; but in truth and like those easy-drinking dark beers, only some dark cigars are stronger – some are not, and it’s one of the biggest misconceptions people have about cigars in general. Part of a cigar’s body is strength, another part is the intensity of its flavors. It’s very possible to have a mild Maduro cigar – where the strength is dialed back, often thanks to the fillers – but the flavors are still plentiful.

Many Maduro wrappers come from a plant that’s been stalk cut (think Connecticut Broadleaf or San Andres). Others traditionally have come from a later or “high priming,” where the leaves are generally thicker – but cigar makers now use a wide variety of leaves, as long as they can stand up to the demands of fermenting the tobacco to that deep, rich-looking brown color. Brazilian, Nicaraguan and some Ecuadorian tobaccos make for spectacular Maduro.

Fermentation is the key: leaves are piled into “bulks,” basically compost heaps that weigh about two tons. The bulk is covered to retain moisture; the water, along with the tobacco’s own weight, generates heat inside the pile. The tobacco ripens, ammonia and nicotine subside, and color, aroma and flavors develop.

But for Maduro tobaccos, it’s a lengthier, more intense process – and much more involved than just leaving it in a little longer, like browning a turkey. It can take months to get it right, as the bulk is carefully built and rotated every week or so to evenly control the pace of fermentation. Temperatures in that pile can be as much as 40 degrees hotter than for other tobaccos. The extra time and heat smooths out the peppers and spices…and when you hear people describe “sweetness” in these darker cigars, it’s because starches in the leaf have converted to sugar, and are poking through in the mix. In the end, a richer flavor.

Now that we’re all on the same page with these sweet and toasty flavors, it’s time to find some easygoing Maduro choices that’ll deliver them without bowling you over. You could always choose a mild cigar – Baccarat or Macanudo are both “known quantities” – and go for its darker counterpart. But why not experiment and see what other mild Maduros are out there? Start with these:

Like I mentioned above, start with a known quantity – a mellow Fuente, say maybe the classic 8-5-8 – and swap out the Cameroon for a toothy Connecticut Broadleaf. Still mild, but now a cedary and sweet smoke, with all the delicate touches of smooth Dominican tobacco flavor. A great starter; and if you want to dial it back even further, go for Fuente’s cousin blend Montesino – that makes for a very mild Maduro.

Excalibur is a longtime mellow favorite, despite the abundance of Nicaraguan and Honduran long fillersadded to the Dominican core. But here is a case where aging the tobacco plays a significant role: a long, deep rest continues the work done during fermentation to give Excalibur its smooth character. Now clad in Broadleaf, the flavors get to shine in this almost-medium bodied smoke.

Despite its name, a very chill smoke – and one for the big ring fans, if you opt for the 64×7. A smash hit for Asylum, the original Ecuador Connecticut wrapper has been jettisoned in favor of a scrumptious San Andres leaf from Mexico, but retaining the sweetened cap that made this cigar a crowd favorite. Tweaked to be a bit more than mild, but solid proof that Honduran cigars are capable of much more than roughing you up with spice.

If you have yet to try a Brazilian Maduro, it’s an easy intro with Brick House. The top layer is an Arapiraca leaf, which burns lighter in intensity and less sweet than some of the other Maduro leaf options out there…but without those bigger flavors in the way, you’ll get a better sense of the Nicaraguan fillers inside. Burns silky smooth.

Start with the light Ashton Classic; then, trade the buttery Connecticut Shade wrapper for its Broadleaf cousin, and let the finely tuned flavors roll in. Both the Dominican long fillers and the CT Broadleaf in these 90+ rated premiums are well-aged (hence the name), so yes, they’re mellow; but tinged with a darker sweetness, some tangy sensations and an alluring aroma, this Ashton is a mild Maduro that finishes a little more on the rich side…and that is good.

As I mentioned, Brazilian Maduro is a bit of a different taste than your usual fare of Broadleaf and high primings of Nicaraguan tobaccos. It’s thinner and more subtle in taste, but adding this leaf to the blend adds complexity. Not something you’d expect to talk about when smoking a Cuban sandwich-style cigar, such as La Vieja Habana – but Drew Estate found a way to make it work. One of the DE originals from “back in the day,” La Vieja is a smooth-smoking Maduro that exudes mild wood and earth flavors, plus an enjoyable aroma.

Confession: Las Cabrillas was the first brand of which I ever bought a whole box. Ahh, memories. The price was (and still is) right, and I soon realized that some Honduran cigars get overlooked because they’re so mild and toasty. Las Cabrillas’ Maduro version is just as smooth, and maybe a little creamier with the addition of a Mexico-grown San Andres Morrón wrapper. Some nice surprises are down here, lurking under the radar…

The CAO Gold is a mild classic, and a great pick for first-timers; this is an easy jump to make if you’re in search of a mild Maduro. Rolled with a core of well-aged Nicaraguan long fillers, this CAO is treated to an oily Arapiraca wrapper in lieu of Ecuador Connecticut Shade – the smoke is thicker, the flavors are a bit deeper. I’d call it a little more “juicy” than the original Gold, but without overpowering – this Maduro draws the line just below Medium in body and strength.

From JC Newman, a Dominican of super premium proportions. Built on the luxurious all-Dominican foundation of Diamond Crown, an oily, well-aged Connecticut Broadleaf wrapper has been added to give the whole smoke a shift in flavor profile toward the sweeter and earthier side of the spectrum. If you’d like a mild Maduro with a smooth and consistent burn, but want to keep the taste a little softer in each puff – the juice is worth the squeeze.

Last but not least, here’s one for the budget crowd…made by Quesada, Dominique has the typical mellow, nutty character of a straight-up Dominican core blend. For this version, it sheds the Ecuador CT wrapper and suits up in a rustic Connecticut Broadleaf – taking everything up a notch, while keeping it at an affordable bundle price. I’ll admit, I went into Dominique with low expectations, but came away a little surprised; my advice? It’s a mild Maduro, but it’s from Quesada – take a chance.

Not all Maduros are full-throttle powerhouses; while many of them can smoke big n’ rich, there are plenty of mild Maduro options that will satisfy. Start with the ten I just listed, and I’ll bet you find these dark cigars in your wheelhouse in no time. Got others to recommend? Help your brothers and sisters out, and list them in the comments.

smoked LAS CABRILLAS & LA VIEJA HABANA. Terrible cigars. The rest, except for DOMINIQUE, which I never had. are decent but over priced. You left off one of the best, E.P. Carrillo Selection Oscuro. Hardly reaches medium and is an excellent darkie.

Reading Time: 3 minutes It’s a distinctive change of pace for Henry Clay, and Gary proves it in this #nowsmoking cigar review – as he takes the War Hawk Toro for a ride. Click here to watch the video and read his tasting notes.