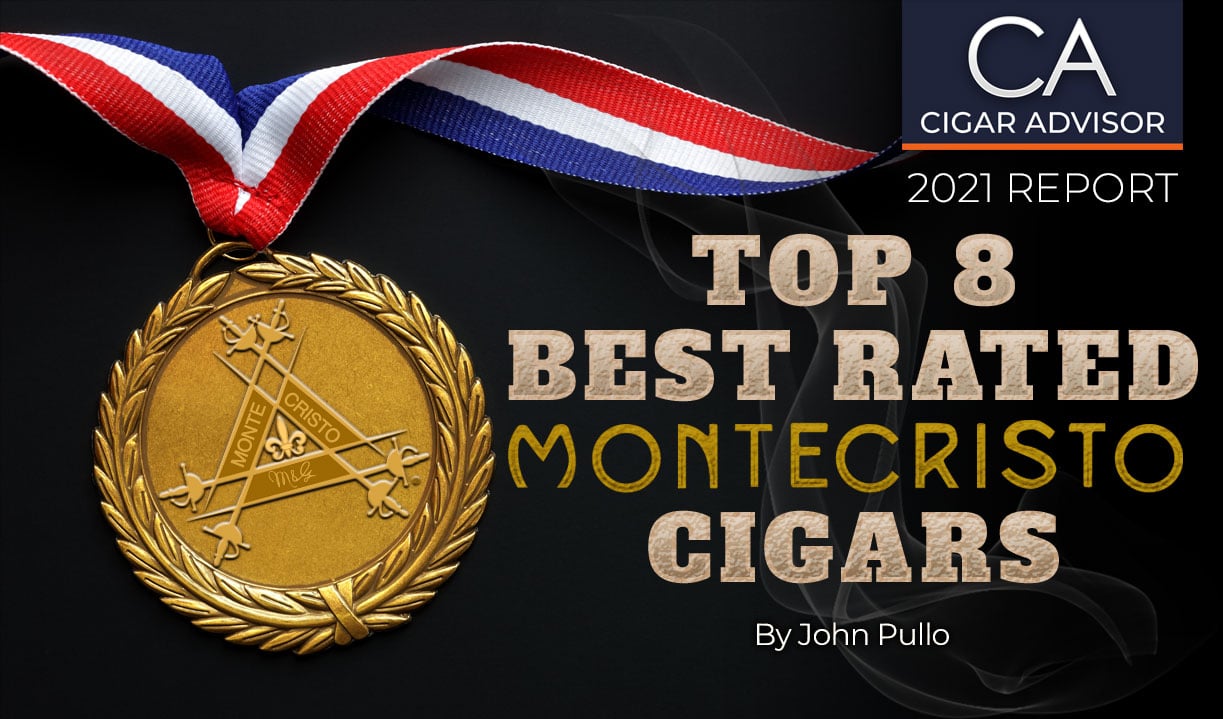 Montecristo cigars have a pretty rich reputation: Cuban heritage, luxurious and refined, one of the architects of the “Dominican cigar” definition. And while they cornered the market early on easy-smoking luxury cigars, Montecristo has come a long way from its mellow beginnings.

More recently, the Grupo de Maestro blending team has taken an active role – along with Altadis’ Rafael Nodal, Nicaraguan phenom AJ Fernandez, and the legendary Plasencia family – in expanding the Montecristo portfolio with new and exciting flavors, and winning high and hearty praise from the Monte faithful while they’re at it.

Part of the Cuban cigar making tradition in the early 20th century was to have a “lector” seated at the front of the rolling gallery, reading newspapers (and occasionally books, as a treat) to the factory workers while they made cigars. Legend has it that Alexandre Dumas’ novel The Count of Monte Cristo was popular at the Particulares Factory, inspiring Alonso Menéndez to borrow the name for the new “Montecristo” cigar brand he introduced in 1935.

When Castro took over, Menéndez and his partners fled to the Canary Islands. Lawsuits over the brand name forced them to the Dominican Republic in the 1970s, where they reestablished Montecristo in its closest-to-current form; production of Cuban Montecristos continues in Havana.

While it was a treat for tabaqueros to hear the story of the Count, these cigars now have a story of their own to tell.

About Our Top-Rated Picks

Today, there are over a dozen Montecristo brands being made in the DR and Nicaragua – to say which Montecristo is best, well…

I’ve spoken out repeatedly on my beliefs about cigar ratings and reviews, and how much they should really factor into your decision to buy a cigar. We all taste things differently – so even if I tell you a cigar is good, you still may not like it. But if three, four, five people tell you the same thing, that should be enough to tell you if a cigar will live up to its promise. “Expert” reviews are ok, but I have found the most honest assessments come from our customers: it’s short, sweet and straight talk.

As with all Advisor “Top Rated” cigar guides, we’ve established a minimum for how many customer-reviewers we’ve heard from so far; for this list, a cigar needed at least 5 reviews to make the cut.

If you feel there’s a Monte missing from this list, comment below – and rate it at famous-smoke.com! Your review helps other cigar smokers (and me) find what suits our palate and determine if a cigar – like any of these 8 Montes – lives up to the hype…

While the original Montecristo has subtle, smooth and creamy to its credit, the Montecristo White Series marks a tasteful addition of Nicaraguan tobaccos for a thicker, more velvety smoke. Still mellow, but now rounded out with a bit more complexity: we found added notes of coffee and honey. With 5 stars across the board, it’s not a shock that Monte White is also one of our 10 Top-Rated Dominican Cigar Brands. The Toro and Rothchilde sizes have almost as many 5-star reviews, so by all means check out those comments if you’re looking for a reason to try this Monte White profile in a larger ring gauge.

If I were to guess, more people arrive at this cigar from smoking AJ Fernandez cigars than they do by working up through the Montecristo ranks...but that’s how this Monte takes its slew of 5-star ratings. This is different from AJ’s other collaboration smoke, the Montecristo Nicaragua, in that this cigar uses a 3-nation blend (Dominican Piloto, Nicaraguan Criollo ’98, Ecuador Habano wrapper) and burns a little fuller, stronger and sweeter – we found cocoa, coffee, nuts and vanilla in the mix. This Robusto is also shorter, but at 54RG is equally as plump. Dark and full bodied – two things that normally don’t come to mind when talking about Montecristo cigars.

When I reviewed it for our Essential Guide to Montecristo Cigars, I called this Churchill a “connoisseurs’ cigar, where nicely refined flavors slowly mature.” Slowly – as in, it takes 2+ hours to smoke it. That’s the biggest plus among our reviewers: long lasting, and… well, “great.” Everybody said it’s great. The transitions are slow and subtle, but for the moments when flavors like pepper, leather, cocoa and spice become apparent. Really, this is everything you enjoy about the familiar Montecristo cigar formula, but with the dial turned up to “decadent.”

An “all around” good cigar, say many of those 16 reviews. Medium bodied with tastes like cedar, toast, pepper and leather, Platinum is an intensely flavorful smoke – so if you had only ever been exposed to their Connecticut wrapper cigars (see Monte original, Classic, White), this Robusto raises eyebrows. By Montecristo standards, some pretty exotic tobaccos are at work: Dominican and Nicaraguan long fillers are matched with Peruvian tobacco, and it’s into a Mexican San Andres Cubano wrapper they go. Another case where the blend speaks positively in different sizes, and the comments pretty much say you can’t miss with this Robusto, the Rothchilde or the No.3 Corona.

Blended with Plasencia’s expert helping hands, all 4 Nicaraguan growing regions are represented: Jalapa, Condega, and Esteli long fillers, with an Ometepe binder and Nicaraguan Rosado wrapper. Relentless really earns its stars for great burn and good flavors, with wood, citrus, earth, coffee, and a hint of sweetness among them; we could easily sum it up by saying, “rich, but without overdoing it.” The generous rating aligns with the concept that Toro has pretty much become the most popular size cigar among cigar smokers.

Montecristo No.2 – 4 stars from 38 customers

Fun fact: nearly every Montecristo line extension includes a No.2 Torpedo. This is the original – although it isn’t actually a torpedo, it’s a piramide. A gentle and good-natured smoke, Montecristo (aka, the Yellow Box selection) issues a thick, creamy smoke laced with wood, spice, and just a hint of pepper on the finish. And that’s the idea, as it’s really a celebration cigar that just about anyone can enjoy. If you don’t like figurados, the No. 3 – a Corona with similar (though fewer) accolades – should perform just fine for you.

High marks for the Monte by Montecristo for excellent construction and aroma. It’s a slow smoker, too, so we found plenty of time to savor the varying tastes of nuts, dried fruit, pepper, leather and cedar, while still appreciating the aesthetics of the oily Ecuadorian Habano wrapper. Dominican and Nicaraguan tobaccos are densely packed, firmly rolled and full bodied – with the Monte by Monte leaving behind a satisfyingly gut–filling sensation.

There are only 4 customer reviews as of press time, so let’s call this Montecristo Nicaragua “one to watch.” Conceived by Rafael Nodal, he turned to an authority on Nicaraguan leaf – AJ Fernandez – to help develop a puro recipe with deep flavor. There’s charred cedar…black pepper…lots of spice. Presented in big ring gauges (for Montecristo, anyway), if you’ve been angling for a cigar that is rich n’ spicy, but still burns with that refined Montecristo demeanor – I expect this cigar to be on your short list in no time.

I’d like to offer the spotlight to Montecristo’s Epic Craft Cured 2006. Although I don’t own as discerning a palette as a reviewer should, I lean towards the milder bodied creamy smooth smokes. That said, I have loved this cigar from the first draw. A very balanced blend of light pepper and spice, smooth smoke and texture and what I would say is medium to full body. It’s a cigar I enjoy anytime of day that pairs very well with coffee to a fine Bourbon or single malt Scotch. I highly recommend trying.

Hi Donald – I agree. I’m more of a medium to medium-plus preference smoker. I recently had an Epic Craft Cured that was in my humidor for a while, and it was just as you described. So, DITTO, and thanks for the comment and suggestion. G-~

Reading Time: 2 minutes CAO Flathead is practically a household name – and we’ve paired it with one of the best Islay Scotch selections in the world. We’ve got a feeling you’re going to like this one.