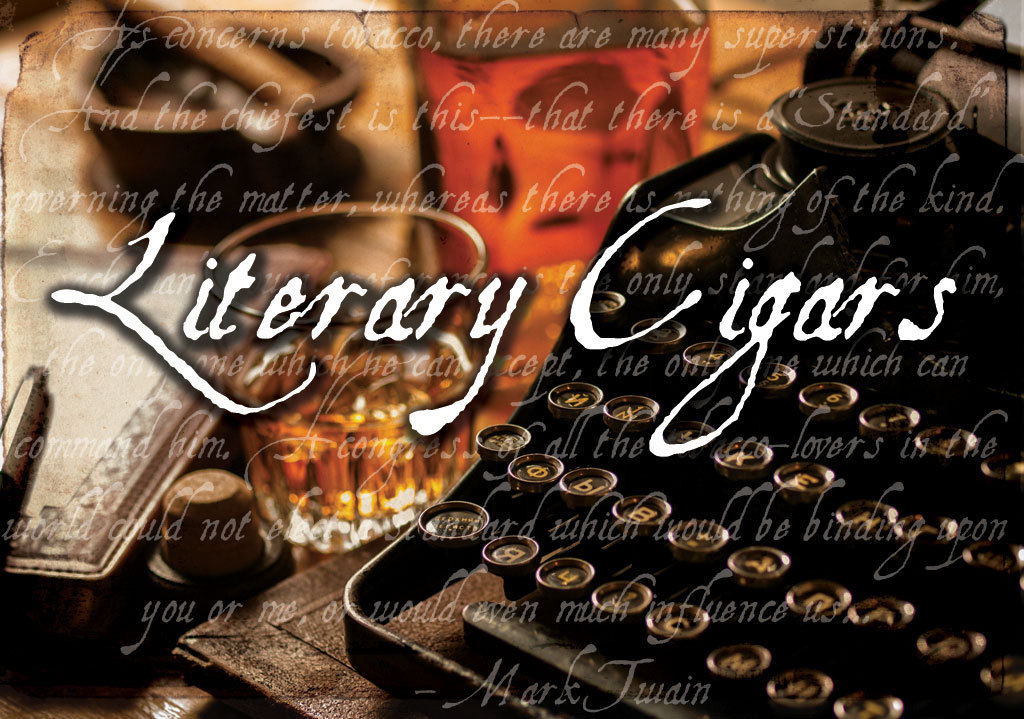 Cigars and relaxation go hand in hand, but boy when you add a good book to the mix, it’s a great time. While I’ve reveled in the time alone, reading everything from Dante Alighieri to Bruce Catton, a good cigar completely enhances the whole experience.

A wild and crazy weekend involves sitting on the front porch, smoking a cigar, reading a book.-Robert M Gates

Cigars and literature share a history together – from the modern classics by Mark Twain and Ernest Hemingway, going all the way back to classic writers such as William Shakespeare and Alexander Dumas, many cigars have taken their name from these authors and their works; hence, literary cigars. Like a good story, a good cigar starts with the experiences they are based on and recreates them for the reader/smoker. Mark Twain once reported that he briefly quit smoking, resulting in a case of writer’s block he’d never seen before: “I found myself most seriously obstructed. I was three weeks writing six chapters. Then I gave up the fight, resumed my three hundred cigars (per month), burned the six chapters, and wrote the book in three months, without any bother or difficulty.”

Literature is not limited to those who smoke cigars – not in the slightest. Due to the monotony of rolling day in and out, lectors were hired by the cigar rollers to read books and news to the torcedors. This lead to the torcedors becoming some of the most well read and worldly men in their towns. Of course, some books stuck out more than others, notably Romeo and Juliet and The Count of Montecristo; and I’ve spent some time in the library and the humidor, compiling the top cigars inspired by the written word.

From the torcedor’s table to the typewriter, here is my list of the Top 5 Literary cigars – plus an extra:

Ernest Hemingway embodies the manly-man and his love of drink and cigars was well known, if not notorious. Cuba was Hemingway’s longest residence and, to date, the Cuban Government still preserves his 21-acre estate, Finca La Vigia. In 1986, the Arturo Fuente brand began making the tribute cigar that put them on the map. These literary cigars have been so essential to the brand that they established the Hemingway Hall of Fame, a place where 20 of the top rollers ply their craft among inspirational articles and Hemingway memorabilia. The Fuente Hemingway features rich flavors in a medium body with a velvety Cameroon wrapper and the smooth and complex flavors of Dominican binder and filler.

It was love at first sight, the first time Yossarian saw a cigar. Rocky named this cigar after the Joseph Heller classic, filled with brilliant satire. According to Rocky the name Catch Twenty-Two is due to the cigar being sold for less than it is actually worth, thus the “catch”. In fact, all of the cigars in the line go for under $5.50 per stick. If you want to see things twice, light up a Catch 22 while reading Catch 22. It’s superb construction with Honduran Corojo wrapper and Honduran and Mexican filler will have you falling in love all over again.

Old Bill Shakespeare has been credited with a lot of things: The Renaissance, iambic pentameter, and modern theater as we know it. But not everyone seems to recognize his influence in cigars. These literary cigars were named from Shakespeare’s eponymous Romeo and Juliet; the play’s popularity amongst the torcedors led them to name their factory in homage. While under the showmanship of owner Jose “Pepin” Rodriguez Fernandez, the brand became a classic amongst cigar smokers worldwide. The Romeo, the ill-fated male protagonist, is personified by this juicy full-bodied cigar with an oily Ecuadorian Habano wrapper.

The epic tale of Edmond Dantès in The Count of Monte Cristo is a timeless classic that stands to the test of time; a tale that left an indelible mark on literature as a testament of the depths a man will go to satisfy revenge. On the other hand, the cigar, also named by the torcedors, proves an exciting smoke time and time again. The delicious Epic makes for a flavorfully balanced smoke paired with a book littered with trials and tribulations. Its medium body hosts big flavors of wood, leather, caramel and nut with a savory and satisfying finish.

Another favorite amongst the cigar factory workers, the Cervantes classic Don Quixote is known as one of the most influential pieces of literature in history. Paired with his faithful yet simple-minded sidekick Sancho Panza, the two roamed the Spanish country rescuing damsels and battling windmills. Like the character, this literature-inspired cigar proves a handy companion for maximum relaxation with medium-bodied flavors of black pepper, cocoa, cedar, and nut. A classic smoke for a classic book, made at the old Villazon factory by Hoyo de Monterrey, our sidekick bares a creamy Connecticut Shade wrapper with broadleaf binder and a filler blend of Dominican, Nicaraguan, and Honduran tobacco.

We’re getting psychological here – Ventura’s Archetype series takes its name from the archetype, a term popularized by psychologist and philosopher Dr. Carl Jung. Published under The Archetypes and the Collective Unconscious, an archetype focuses on imagery to denote supposedly universal and recurring mental images or themes. Strange Passage fulfills a full-bodied profile; a multi-dimensional premium in a box-pressed Ecuadorian Habano wrapper with a spicy Honduran Corojo binder and a  multi-nation blend. I say phooey to Freud, a cigar is not “just a cigar” with flavors like this.

Maybe this is a bit of a stretch, but Jonathan Drew certainly imparts a unique swagger to his cigars – and John Steinbeck certainly had the same effect in regard to his writing. Steinbeck had a penchant for drawing a winged pig on letters, novels, and most of his works. This ‘Pigasus’ was underscored by the Latin phrase, ad astra per alia porci – “to the stars on the wings of a pig”; a reminder to strive for the greater no matter how low your skills may seem. JD can certainly empathize with this sentiment, given some of the setbacks he faced in his early days of breaking into the cigar industry. The Flying Pig vitola, a 4 1/8 x 60 with a pigtail cap, is one of the most sought after smokes in the Liga lineup.

What do you like to read while smoking? Share your cigars, books and photos in the comments below!

All good literary cigars, I never had the Catch-22, but the Hemingway is my go to cigar!

Ive had the Epic which is very good. The Count of Monte Cristo is perhaps my favorite book so it makes sense.

Reading Time: 2 minutes #nowsmoking: see our Romeo 1875 Nicaragua cigar review, and see how this RyJ pays respect to the brand’s Cuban flavor profile. Click for tasting notes on this Toro and why you need to try it, delivered in under 2 minutes…