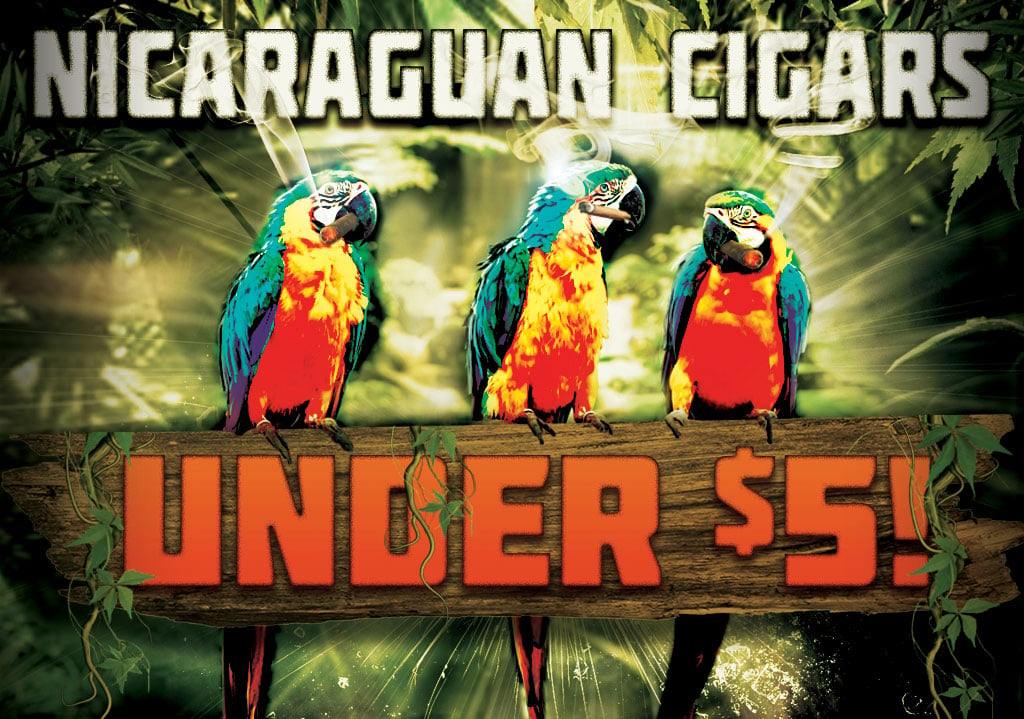 It’s a raging debate among today’s cigar smokers, “Who makes the best cigars?” I’m not going to tell you who is the best and who sucks because that’s nearly impossible to say – we all know it’s completely subjective to say one is better than the other, as there are no bad cigars – only better ones. But many critics, myself included, will agree that Nicaragua produces some of the best premium cigars you can lay your hands on.

Before we delve into my top 10 today, it’s worth looking the history of these sweet cigars. The history of Nicaraguan cigars is as rich as the very tobacco they’re made with. Starting with the Cuban Revolution and the exodus of 1959, many Cuban cigar makers left the island in search of a new home to grow their tobacco and roll cigars. While cigarette tobacco had been running the show in Nicaragua for years, cigar tobacco had not been supported until the Somoza government found a way to take advantage of Castro’s revolution — taking some of Cuba’s best cigar men and tobacco seeds, and financing a new industry for Nicaragua. The great names all played a part: Plasencia, Padrón, Oliva, and Bermejo. These families were free to re-establish their cigarmaking legacies- but even the history of cigars in Nicaragua is full of tales of civil war, hurricanes, fires and many other setbacks.

Nicaraguan cigars are known for being sweet and spicy – and they can show a real range of flavors, depending on the growing region their tobaccos hail from. The growing regions of Estelí, Condega, and Jalapa have produced some of the best cigars available today. In fact, 2016’s top 25 cigars featured 12 cigars manufactured in Nicaragua including Rocky Patel Sun Grown Maduro, Padron, Drew Estate’s Herrera Esteli Norteño, and A.J. Fernandez, among others.

Perseverance has paid off: today, Nicaraguan cigars are among the more popular selections on the cigar shop shelves. Of course, cigars aren’t cheap and money – much to my dismay – still refuses to grow on trees. Being a smoker on a budget is a task that requires some patience to find the right deal; and to help, I’m sharing my recommendations for the top 10 Nicaraguan cigars under $5.

Ed. Note: Famous Smoke Shop per-cigar prices listed are based on box purchase, current as of Jan. 27, 2017 and are subject to change.

Say hello to my little friend! The Special G is short and small but with BIG flavor. A great medium-bodied cigar packaged in a sensuous Connecticut Broadleaf wrapper with Nicaraguan long fillers and a Cuban-seed Habano Nicaraguan binder. Oliva continually makes great cigars at a great value for the average cigar smoke and I consider this a go-to in my humidor.  Unlike the rest of its companions in this highly-rated series, The Special G cigar is the only one not box-pressed. Stock up! It’s a 48-stick box.

Jesus Fuego has brought the court back in session with The Judge Volume 2: Blind Justice. As opposed to the original, hard-lined Judge, this new addition is a more lenient cigar. A shiny Ecuadorian Connecticut wrapper applied to a mix of Nicaraguan binder and fillers gives The Judge a mild, mellow touch. I was one of the first few allowed to try it, and I must say it’s a great smoke at a great price.

A survivor of the Cigar Boom, Carlos Torano Signature features a unique mix of Brazilian Arapiraca Maduro wrapper, Connecticut binder, with Dominican Cubana and Nicaraguan Habano ligero fillers. A highly-rated favorite for many, this medium to full strength smoke has an ultra-smooth taste with hints of cocoa and that undeniable Nicaraguan spice. An absolute knockout for only $3.49 apiece, by the box.

La Gloria is one of my personal favorites – so I must admit that picking up this Serie R line extension for under a mere five dollars is a steal. The LGC Serie R Black Maduro No.64 is a true Nicaraguan with a Maduro Connecticut Broadleaf wrapper, a Cuban-seed Nicaraguan binder and Nicaraguan filler. This cigar is no joke; it’s a power bomb of flavor with rich spices, sweet and charred cedar, and a smooth earthiness. DO NOT attempt to smoke on an empty tank.

Renowned cigar master Omar Ortez takes his time. He crafts his cigars, the Original included, on his farm in Nicaragua just north of Estelí.  The Original is a Nicaraguan puro with dark ligero fillers that offer a bold, spicy flavor. It’s a wonderful blend that will entrance your palate with a deep rich and satisfying smoke at a price you can’t beat.

For the mild-to-medium this little ditty does the trick. The powerful Nicaraguan filler and binder is banded together in a harmoniously light brown Ecuadorian Connecticut wrapper. This little guy starts at 11 with a shot of pepper but then dials the volume down for a smooth and creamy finish. A great accompaniment to any cigar collection and at $4.59 a stick, you can’t miss out on picking up a box or two.

La Aroma De Cuba is a marvelous re-incarnation of a 19th century Cuban cigar brand. Handmade in Nicaragua by the Garcia family, they boast gorgeous, chocolaty Connecticut Broadleaf wrappers that surround a rich, spicy blend of only the most prime Nicaraguan tobaccos. The result: a great full-bodied flavor and smooth easy draw, and one I never wanted to end. Sliding in just under $5 a stick for a box of 24, this is a modern-day classic that you can’t afford not to pick up.

Ambos Mundos cigars are made for Tatuaje’s Pete Johnson at My Father in Estelí, Nicaragua. You could call it a value-priced Tat, as Ambos Mundos contain a mix of spicy Nicaraguan fillers left over from Pete’s other lines. The No. 1 Habano features a Nicaraguan Habano wrapper, making this a solid medium bodied cigar with woody, spicy notes.

Much like myself, the Olde Penn Small Corona Cigars celebrate the mighty Commonwealth of Pennsylvania (my family is very patriotic). Each of these instant Keystone classics are handmade at Drew Estate’s factory in Nicaragua using hand-picked long filler tobaccos and a creamy Connecticut seed wrapper. The Liberty Bell is ringing loudly, as the price of these fine, freedom-loving cigars chimes in at an attractive $4 and change per cigar. As the great Philadelphian Ben Franklin once said, “A penny saved, is a penny earned”.

Brick House: excellent quality cigars, affordable prices. Tasty, too: the Brick House Corona Larga was No. 17 in this year’s Top 25 Cigars of the year. This is an absolute solid cigar and the price makes it possible to be your everyday smoke. The blend features Nicaraguan fillers with a rich Brazilian Arapiraca wrapper to bring a creamy fullness to the cigar. Hints of earthiness and red pepper spice transition into deep woods and nutty flavors. Coming in boxes of 25 for under $5 a cigar, this truly is a great go-to.

Brickhouse is my favoriate go to cigar. I didn’t like the Torano much. Left that cigar taste in my mouth for days.

Oliva Special G is small but packs a punch. Flavorful, very pleasant, could be smoked during your coffee break.

Reading Time: 8 minutes Great partners bring out the best in each other – so when two great names in the cigar biz get together to create a special smoke, it’s a big, delicious deal. We’ve highlighted the top collaboration cigars inside; make sure your humidor is ready and waiting.