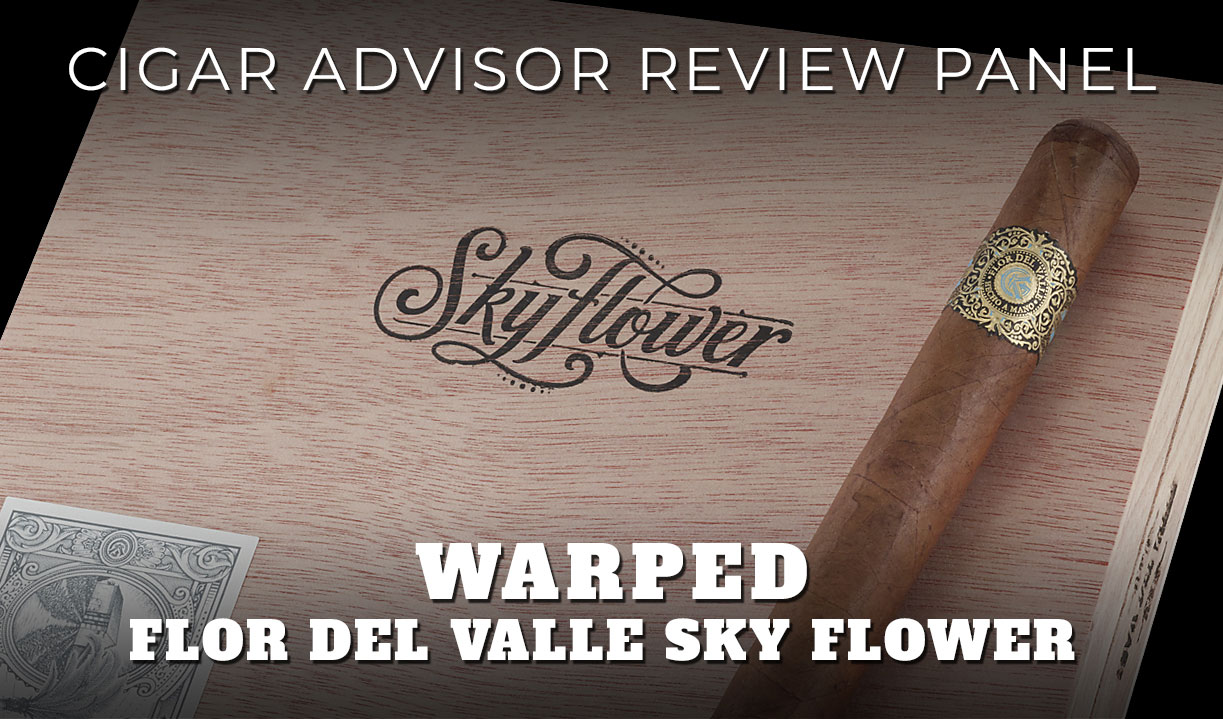 Translating to “Flower of the Valley,” Flor del Valle is an extinct Cuban cigar brand resurrected by Warped. Crafted at the TABSA (Tabacos Valle de Jalapa) factory, better known to enthusiasts as Aganorsa Leaf in Nicaragua, Flor del Valle is a Nicaraguan puro that launched in 2014 with 2 sizes—Gran Valle and Cristales.

Based on the overwhelming positive reaction to the initial Flor Del Valle release, Warped followed up a short time later with 2 new vitolas—Las Brumas, a robusto, and Sky Flower, the 5⅝” x 48 double corona we’re smoking today. And Warped Sky Flower is unique among the Flor del Valle lineup for a couple of reasons. 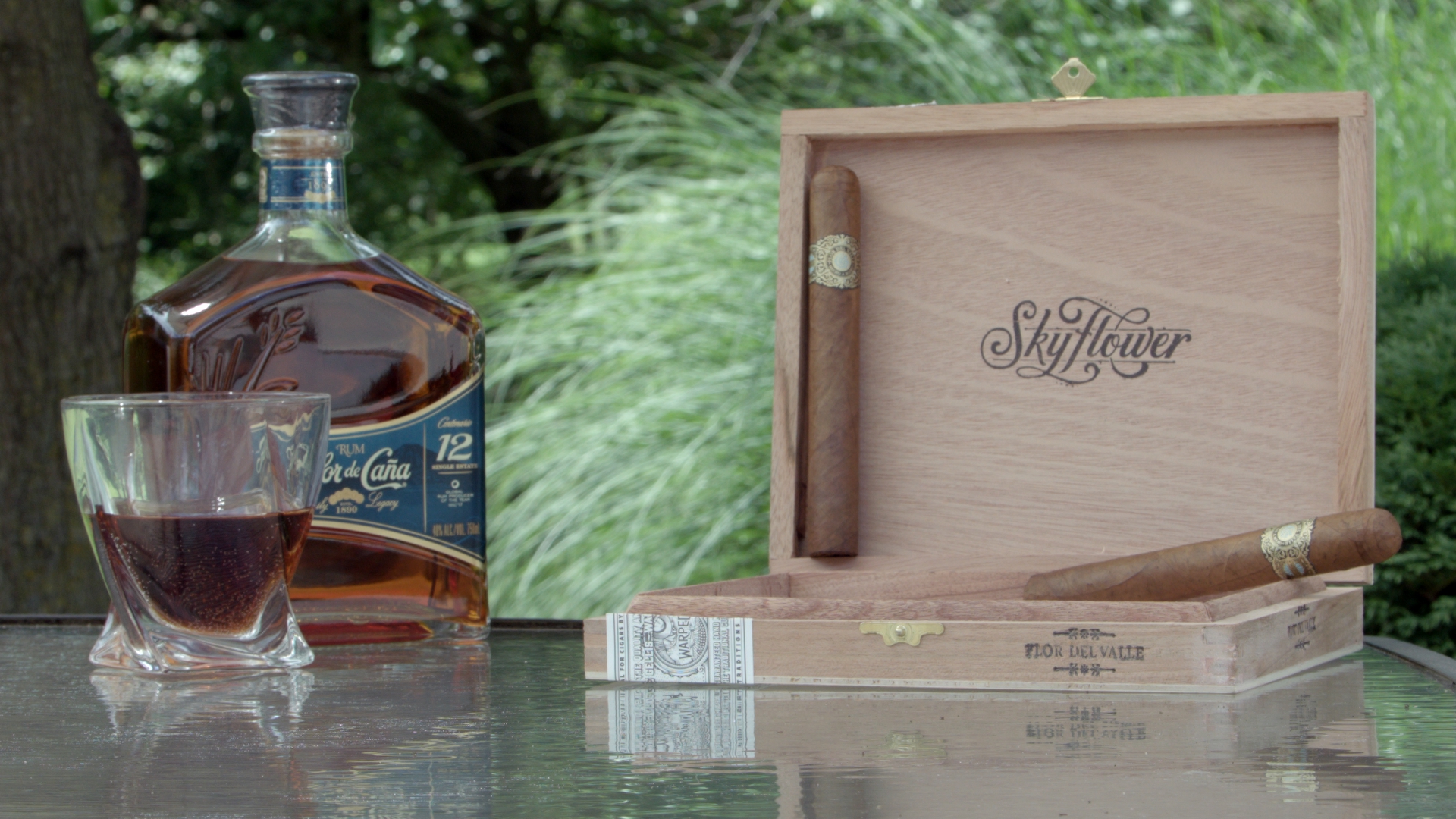 First, and most apparent, is the band. It’s the same design as the other vitolas, except the background color is opposite—black for the Sky Flower as opposed to white. Visually, this sets Sky Flower apart by making the band stand-out more and gives this cigar an overall elegant and old-school appearance.

The other difference between Sky Flower and other Flor del Valle cigars lies in the blend. While nearly identical, Sky Flower includes medio tiempo—some of Aganorsa’s rarest and most prized tobaccos. The scarcity of these tobaccos accounts for Sky Flower being limited production meaning, that while it’s not a limited-edition cigar, at times it can feel like one.

Summary: The Sky Flower smoke was a mix of earthiness, sweet tobacco, and red pepper out of the gate. That said, it was also very smooth, and the red pepper rolled-off within the first half inch to a lesser black pepper strength. The aroma was a bit sharp with a scent of charred tobacco.

Once the blend settled-in, a mix of cream and tartness reminded me of plain yogurt. As the cigar headed into its midsection the sweetness had a mild maple syrup flavor. Combined with a grain-like note, I tasted something similar to maple oatmeal. 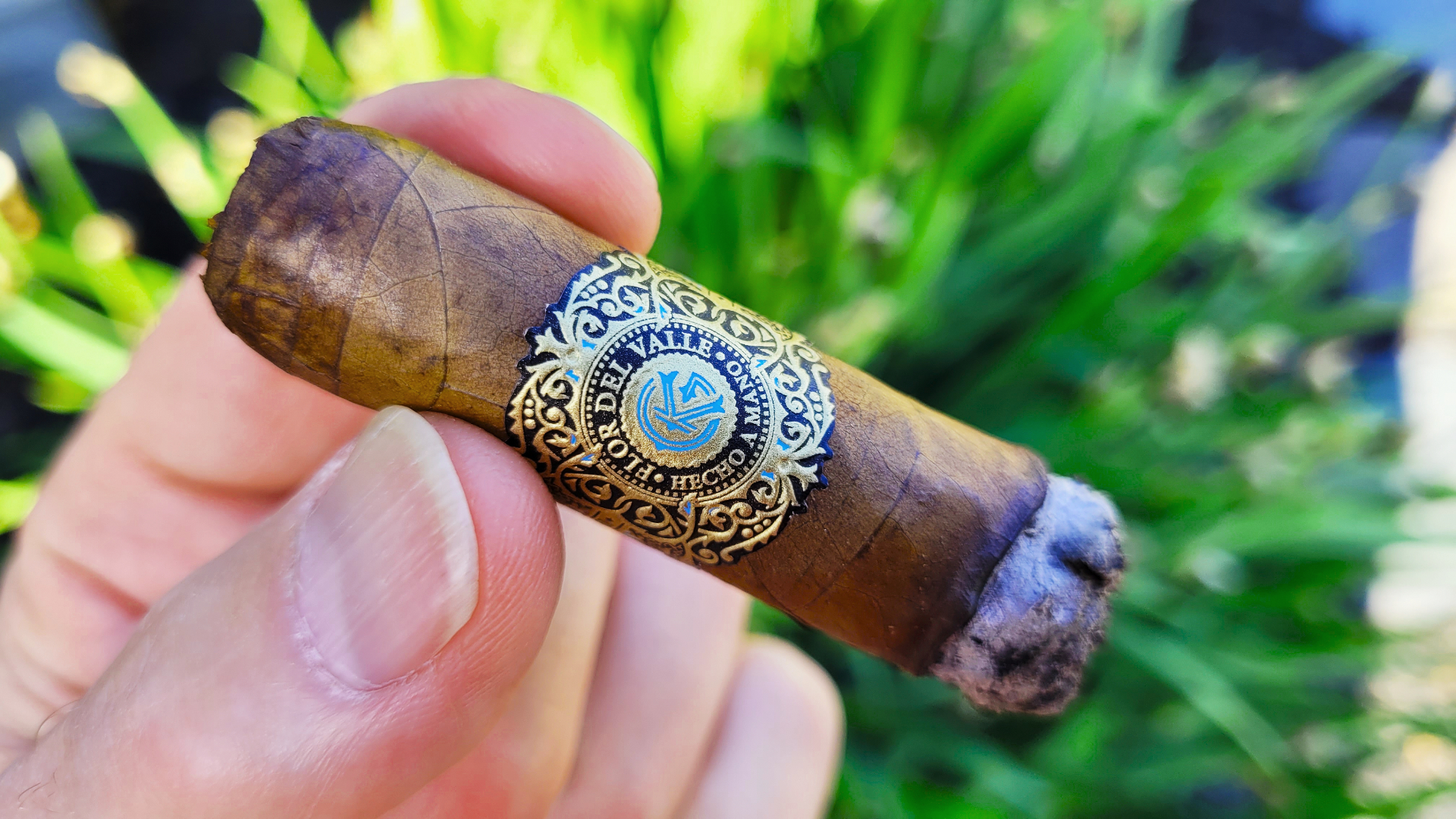 By the last section the peppery finish was offline, but the maple oatmeal remained thru to the end. The final inches proved sweeter as some earthiness also crept back in for an impressive finale.

Flor del Valle Sky Flower wove together several flavor elements that I enjoyed: earth, spice, sweetness and some occasional tartness. And most of them remained true down past the wire. The body of the smoke held in the medium-plus zone most of the way, but Sky Flower’s stealth strength got me on my sample. After my video vitola, nada. Go figure, but it’s worth mentioning.  Based on both my sessions, Sky Flower has the makings of an excellent choice, especially for more educated palates. Some may find the per-cigar price tag a bit high, but Sky Flower is more likely to pay you back in pleasure.

Summary:  A tale of 2 cigars. My experience with Sky Flower was atypical, meaning one that you likely won’t experience. But it illustrates a greater principle—don’t judge a cigar after having only one.

Premium cigars are one of the last truly handmade, artisanal products. And once in a while—despite the many quality control checks along the way—a cigar with a flaw or two makes its way to store shelves. And this was the case with my first sample.

Despite some frustrating issues, I could tell that Warped Sky Flower was excellent and I couldn’t wait to try my second sample. And boy, I’m glad I did. 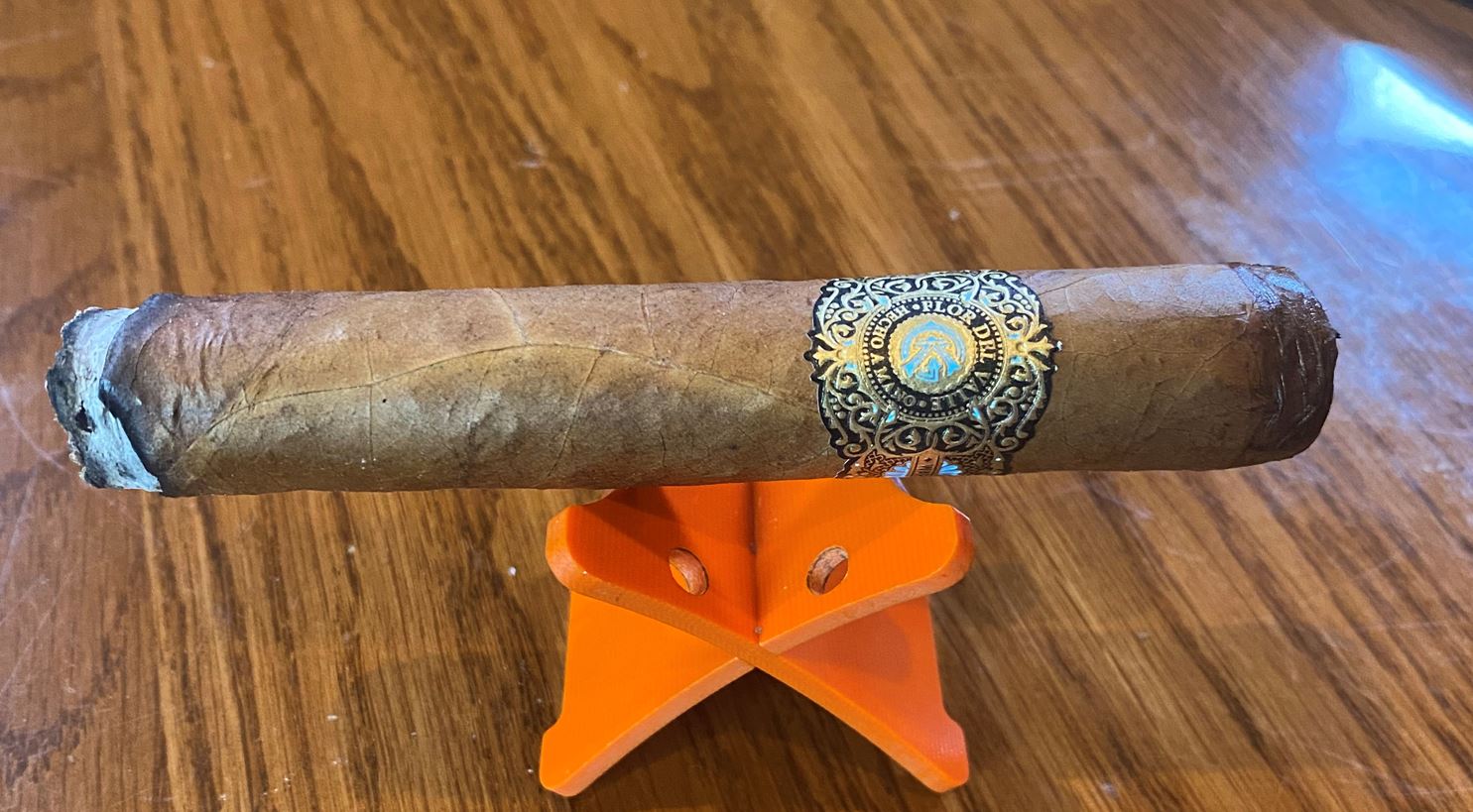 Upfront, I was greeted with notes of pepper, natural tobacco sweetness, and a flavor that I can best describe as salted nuts. The sweetness remained a hint at this point as notes of a smoky wood—like oak— came into the mix.

As the cigar came to a close the red pepper gained in strength but was balanced by more prominent notes of sweetness. Overall, Sky Flower burned beautifully and held a firm, dense, ash. The flavors acted in balance and contrast offering up an entertaining and nuanced smoke.

Warped Sky Flower isn’t a cigar that I’d usually gravitate towards and I’m happy I had the chance to try it. This blend is a surefire, no-brainer for fans of Aganorsa tobaccos, boutique enthusiasts, and those that love Nicaraguan tobaccos. Moreover, Sky Flower is an ideal choice when you’re looking for a cigar with a little something extra to celebrate milestones both big and small.

Construction: Golden-brown wrapper with an oily look, and a bit veiny. Well-rolled.
Draw: Firm, but enjoyable.
Pre-light flavor: Dark fruit, citrus, and a tinge of spice.
Toasting & Light: Wood and earth.
Base flavors: Coffee, spices, earth, sweet wood, and lots of pepper.
Retrohale: Floral with more pepper.
Aroma: Sweet and warm.
Burn & Ash Quality: A bit dusty and flaky at times, but mostly holds up without a hitch.

Summary: Compared to my review of the regular production Flor del Valle Cristales, it’s clear that there are some more potent tobaccos inside of the Sky Flower. I agree with Pullo that the blend isn’t as sweet as some other cigars with Medio Tempo in the filler, but it sure brings the power like a Tesla off the line.

My first few puffs were spicy. Heady, even. The cigar loses that edginess pretty quick—maybe an inch or two—evolving with notes that are predominantly earthy and spicy. I found coffee in there, too, but it’s more in the background. 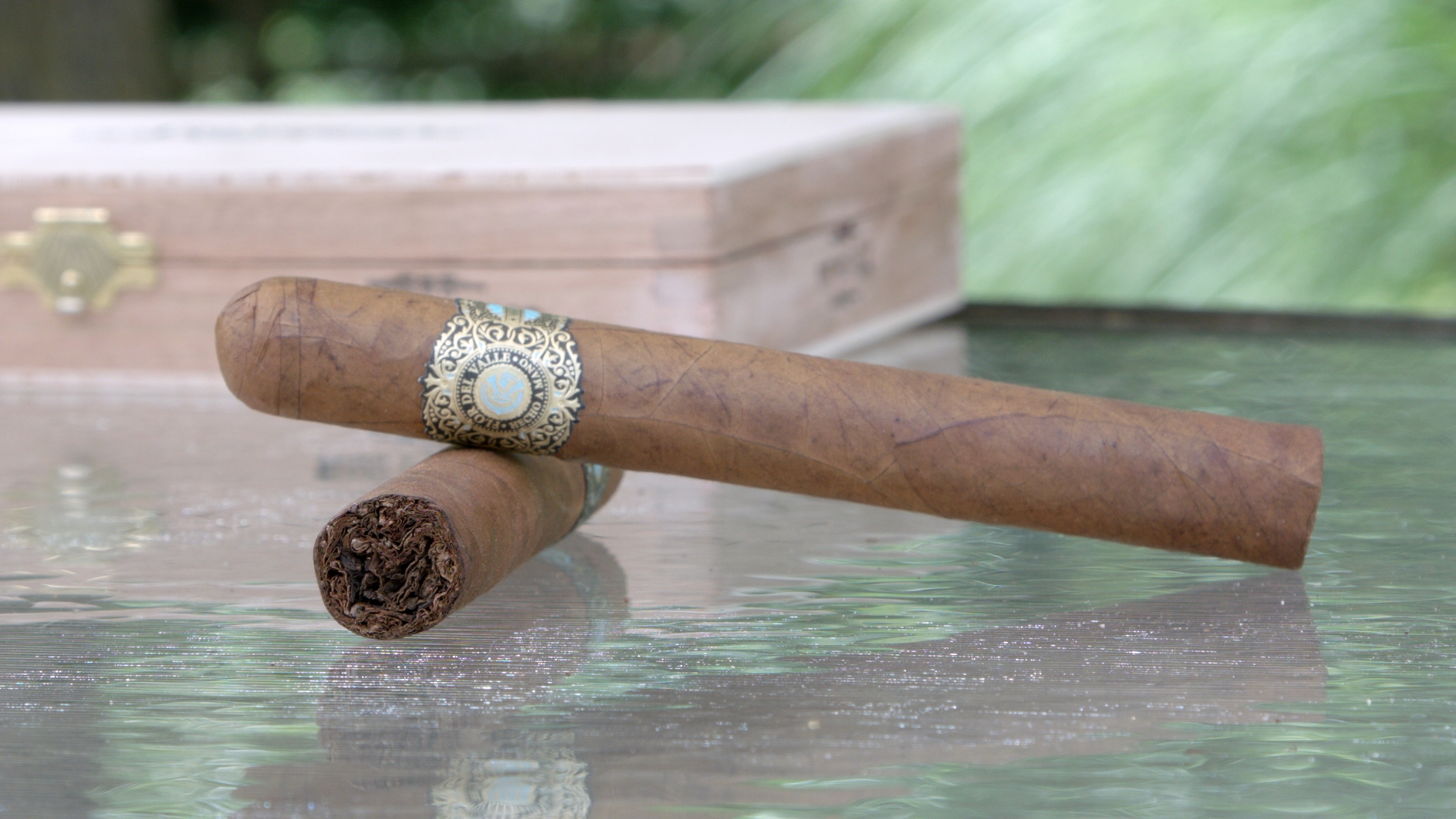 Toward the middle, Sky Flower invites notes of sweet wood to the party. The sweetness is subtle, but it’s good to balance the earth, coffee, and spices that dominated the first half. There’s an almost cookie-like sweetness that pops up as well. Not often enough to list it as a primary flavor, but I’m betting you’ll still notice it.

Brass tacks: Sky Flower stands on its own amongst the rest of the Flor del Valle family. And it smokes a little better (which validates its steeper price tag). That’s bad news, considering the blend is a limited production. The good news…the original satisfies perfectly well on its own. Just enjoy this bonus while it lasts.

Construction: Still a nice size for a skinnier RG; body is firm, Corojo wrapper is very veiny with a tawny, almost caramel color with a hint of oil. Enclosed in cello with an excessively obnoxious security sticker that makes it needlessly difficult to open.|
Draw: Some resistance but perfectly smokeable. Smoke is velvety, and there’s plenty of it.
Pre-light flavor: The smell is pure cedar; the taste has leather, and a little bit dark spice, a little citrus sweet.
Toasting & Light: Tastes of charred oak and earth, and spice everywhere.
Base flavors: Spice, oak, cocoa and earth.
Retrohale: Leather, and a lot more of that spice.
Burn & Ash Quality: Burns slow, steady and straight; ash is solid grey and a little flaky.

Summary: From the get-go, spice hits every corner of your mouth. Even the lips are tingling. There’s Cinnamon Red Hots®, plus a hint of lime. Get past the first third and the Sky Flower really shifts: the spice settles down, while a cocoa sweetness emerges along with a pinch of earth. But as it turns out, the spice is just taking a break every so often – it comes back with a leather taste that tries to poke through (it does, in the retrohale) and graham cracker. Compared to other cigars blended with medio tiempo, the Sky Flower doesn’t hit nearly as sweet. But it definitely smokes more potent, what I called “Aganorsy.” 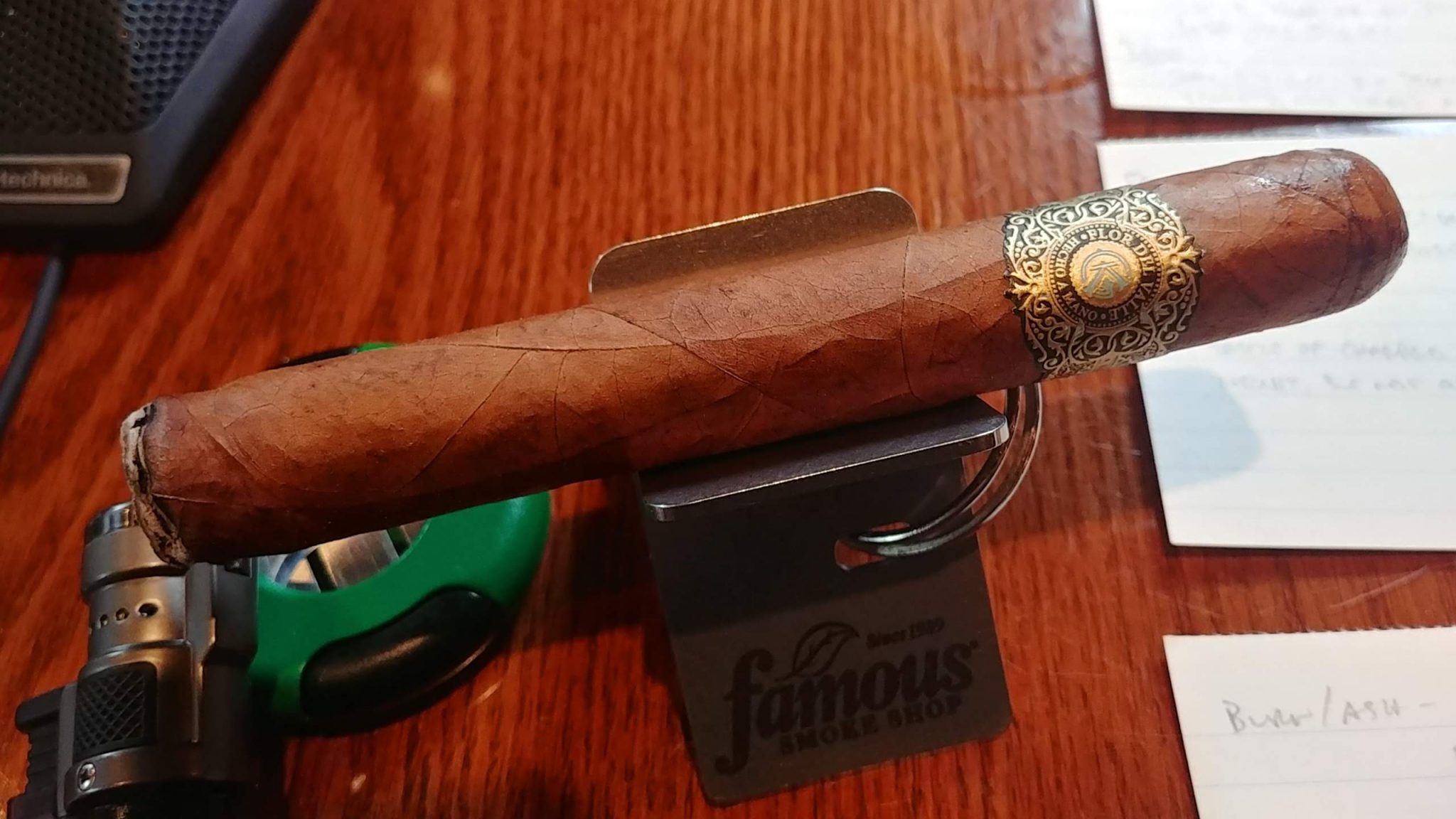 The big takeaways are as follows…when Warped and Aganorsa get together, some pretty high level cigars come out of it. Flor del Valle Sky Flower is chief among this group, in my opinion. The big flavor highlights are spice, oak, cocoa and earth; medium-plus strength from start to finish, and some nuances that the flavor wheel crowd will most certainly find. A definite splurge – dare I say pricey? Sure, but it’s not crazy-expensive – so if you really like it, it was really worth it.

Since you all mention the Cuban appearance, is not the size close to one of the Cuban original sizes?

What are your usual smokes Paul?