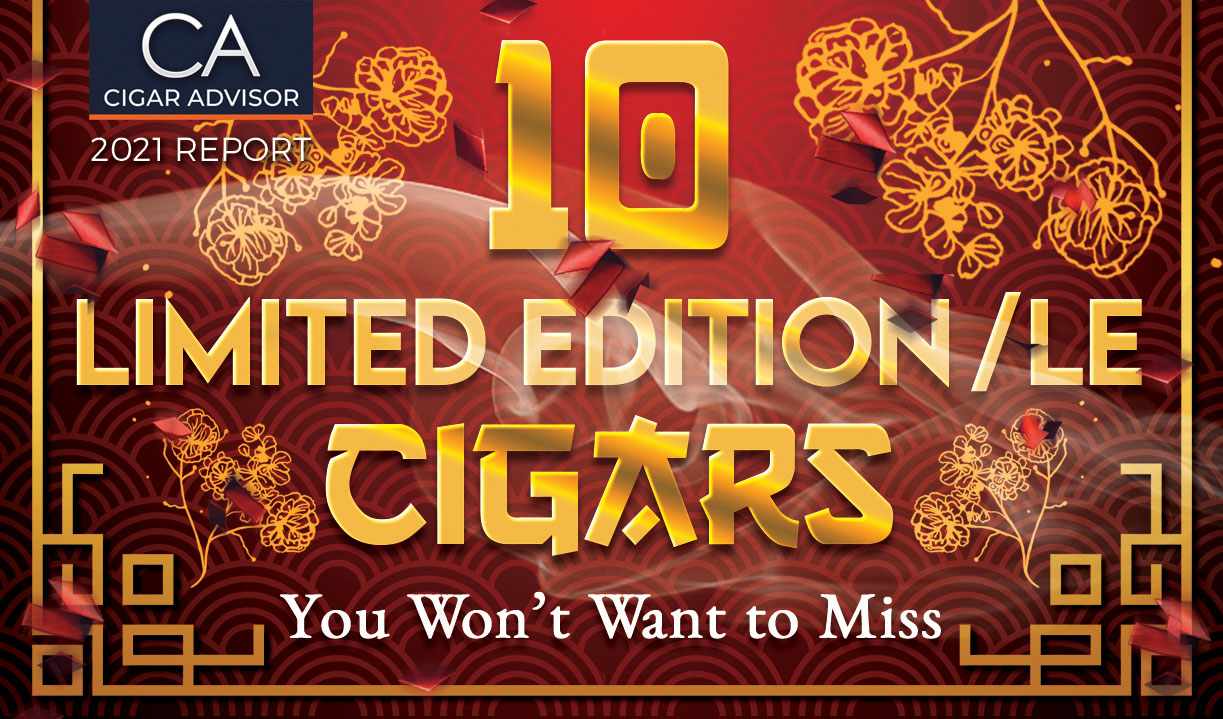 Adding the words “Limited Edition” to a cigar’s name doesn’t necessarily mean it’s a better cigar, but it does tell you there’s something special about it. It could be the cigar is made with a wrapper from a rare harvest, rolled in a unique shape, it represents a milestone anniversary, or it can be all of the above. And depending on consumer anticipation, many Limited Edition, or LE cigars, can disappear in a hurry.

A fair number of LEs are released on an annual basis and designated by year. For instance, the Avo LE cigars are released every March 22 on Avo’s birthday. Punch Rare Corojo cigars are released every April in a special shape. The Alec Bradley Filthy Hooligan is always released in time for St. Patty’s Day, the Camacho Liberty for Independence Day, and the Tatuaje Monster cigars for Halloween. Others are made in limited edition for the annual Tobacco Plus Expo (TPE) and Tobacconists’ Association of America (TAA) trade shows. Moreover, since many annual limited editions are one-offs, if you miss a year you’re out of luck.

There are some cigar makers who release limited edition cigars even if they don’t wear an LE designation, like the Muestra de Saka Nacatamale listed below. Fortunately, a few LE cigars are released in quantities large enough to sustain themselves in the market for a longer period.

The last several years have continued to be exceptional for limited edition cigars. The cigars in this report span from 2017 to 2021, with most coming from prominent boutique cigar makers. Some are Nicaraguan puros, while others are Nicaraguan forward blends, which also shows you how dominant Nicaragua has become in the blending and manufacture of today’s premium handmade cigars.

Leave it to Alan Rubin, who gave us the triangular Alec Bradley Trilogy cigars in 2004, to create a proprietary diamond shape cigar in limited edition. They did it in 2014 with the Nica Puro Diamond Rough Cut, but the first Black Market Estelí Diamond cigars were released in October of 2020. Made by Plasencia in Estelí, the core Black Market Estelí blend is rolled with an extra filler leaf of Habano Ligero from Nicaragua and then carefully pressed to its diamond shape before aging. Sure, as figurados go, it’s a must-have for collectors. But it’s the dark, earthy, 93-rated flavor profile of the BME blend that really make it a must-smoke for passionados.

The AVO Improvisation LE cigars continue to be among the most highly anticipated annual releases. And without fail, on March 22—the late Avo Uvezian’s birthday—the 2021 version was released boasting a sun-kissed Ecuador-grown wrapper.

“The cigar’s shape draws inspiration from the timeless and celebratory history of the AVO line and the iconic AVO Improvisation Series,” said Lana Fraser, director of marketing and retail at Davidoff of Geneva USA.

The copper-colored wrapper undergoes a special aging and fermentation process that boosts the creaminess and sweetness of the tobacco. Then you have the fully aged Dominican filler that only Davidoff can do. The result is a fragrant, medium to full-bodied smoke with a sweet-spicy flavor profile accentuated by an occasional power chord.

This LE cigar was released the year Casa Fernandez celebrated their 35th anniversary. Made in Miami, Florida, it’s nice to see that it’s still around. Like many of the cigars produced by Aganorsa Leaf, the Casa Fernandez Aniversario Boheme 2013 is a Nicaraguan puro perfectly pressed in a buttery, tan Corojo wrapper. And Aganorsa’s Corojo is stellar, to say the least. (Take a whiff of it before you light up.) Once lit, the smoke is thick and creamy offering rich, earthy–nutty flavors augmented by notes of coffee, oak, and baking spices once you hit the sweet spot. A very refined treat for smokers of every experience.

In 2019, when HVC Cigars founder, Reinier Lorenzo wanted to honor the 500th birthday of his hometown, Havana City, Cuba, he created the HVC 500 Years Anniversary Limited Edition cigar. Here again, is another boutique Nicaraguan swollen with Aganorsa Leaf corojo and criollo tobaccos. Those tobaccos have helped HVC earn a lot of well-deserved recognition, too. Light this doble robusto up and the smoke greets you with a creamy pour and exits with a peppery finish. There’s also a fair amount of sweet tobacco, citrus fruitiness, and a chorus of nuts and woody spices. Although it’s very smooth on the palate, cigar smokers who tend to favor spicy, full-flavored blends are more apt to enjoy this HVC gem.

The Henry Clay War Hawk Rebellious Ltd. Ed. is just one of many collaborations between Rafael Nodal of Tabacalera USA and A.J. Fernandez. This special follow-up to its 93-rated predecessor, is a more complex recipe aimed at providing “a unique Nicaraguan experience.” As I said in my review of the Rebellious, it’s worth picking up for the vintage wrapper alone. If you’ve had the War Hawk, you may notice that its feisty brother is a little bolder in spots but keeps its strength well-restrained. The medium-bodied smoke is uber-creamy and flows lazily out of the head. There’s a fair amount of leather with an underlying spiciness followed by oak, molasses, a few mineral notes and a peppery finish. A really solid smoke.

L’Atelier Cigars, Pete Johnson’s follow-up to his hugely successful Tatuaje cigars, speaks to the “workshop” side of the blending arts. The piece de resistance is the dark, oily Sancti Spiritus wrapper that envelops the Côte d’Or 2017 LE. Its glossy color and distinctive flavor come from the hybridization of criollo and pelo de oro tobaccos. There’s also a modest amount of pelo de oro in the filler. Citrusy notes along with baking spices and a breath of cocoa, make this limited edition Churchill one of the finest artisanal cigars in its class. A must-smoke for satisfying the cigar connoisseur in you.

Mil Dias is “one thousand days” in Spanish, precisely the length of time Crowned Heads and Tabacalera Pichardo took to produce this outstanding line. But the standout in the line is the limited edition Mil Dias Mareva, a traditional Cuban Mareva Corona released after the initial debut. The blend remains the same. What’s special is the cigar’s 51/8”x 42 dimensions. According to Jon Huber, “We began work on a Mil Dias Mareva even before we began shipping out the first Mil Dias boxes, as I knew in my gut that this blend would translate beautifully in a Mareva vitola.” Medium to full in body, the Mareva reveals plenty of depth, complexity, and pinpoint balance supported by flavors of wood, sweet and peppery spices, citrus, and caramel on a peppery finish. One of Crowned Heads’ crowning achievements that the more experienced passionado will applaud.

Named for a popular, traditional Nicaraguan food dish, and presented in its own private apartment, the Muestra de Saka Nacatamale (pronounced, “nä-kä-tə-môl), beams with flawless construction. Finished with an attractive, fantail cap, the blend is done viejo granja or “old farm” style, meaning all of the tobaccos come from the same farm; in this case, a small, independent farm in Nicaragua’s Jalapa Valley. Careful positioning of the tobaccos in the bunch is what makes this Toro creamy, full-flavored, and complex. Light peppery spice, sweet tobacco, citrus tanginess, brown sugar, baking spices, oak, hazelnut, and floral notes unveil a virtual wheel of flavors. Suffice it to say, the Nacatamale is one of Mr. Saka’s finest muestras, or “samples.”

One cigar company with a soft spot for Lanceros is Southern Draw. Just about every line in their stable offers a Lancero. Most Lanceros run 7 to 7½-inches in length, but this box-pressed Rose of Sharon Short Lancero at 6½” Robert says is, “our own interpretation of the classic size.” (Also see the Firethorn Factory Faux Pas Lancero which were cut short by accident.) The smoke is medium-bodied and creamy offering well-balanced notes of nuts, cedar, graham cracker and a sweet lick of caramel. Plus, the flavor of the Rose’s buttery Connecticut Shade wrapper really pops. You’ll find Rose of Sharon in a more traditional Lancero size, too, but check out this limited edition version first.

When Davidoff sets out to make a complex cigar, they don’t kid around. The Winston Churchill Limited Edition 2021 is the second limited edition cigar made for the line. Not only is the Ecuador Habano wrapper stellar, the five-leaf core blend is a virtual estate tobacco showcase. Medium to full in body, the smoke oozes fine clouds of creamy smoke. Base flavors of earth, cream, and nuts lead the charge in this highly refined blend. Not unlike Sir Winston, who was quite the Renaissance man in his day, you’ll find the LE 2021 an equally multi-faceted masterpiece. Few other cigars in its class are as elegant or rewarding for capping-off the remains of the day.

Do you have some rare birds in your humidor? Let us know what limited edition cigars you‘ve enjoyed in the past or present.

I picked up a few of the Asylum Eight in the 11/18 size. I’ve smoked all but one of them; I’m going to try to let that one chill for awhile. Spendy cigars but VERY good!

No punch kung pao? One of my favorite ones.

Thanks for the comment. Thing is, we just can’t get ’em all. Besides, we like to include cigars that are currently in stock so others can try them. And to that end, there were several other cigars we wanted to include, but were also unavailable.

Reading Time: 9 minutes The Sleeper Cigar is the one that doesn’t get the love it deserves in social media or by the cigar reviewers. Click NOW to get in on some ‘well-kept secret’ smokes, that should be known and smoked by cigar lovers everywhere…