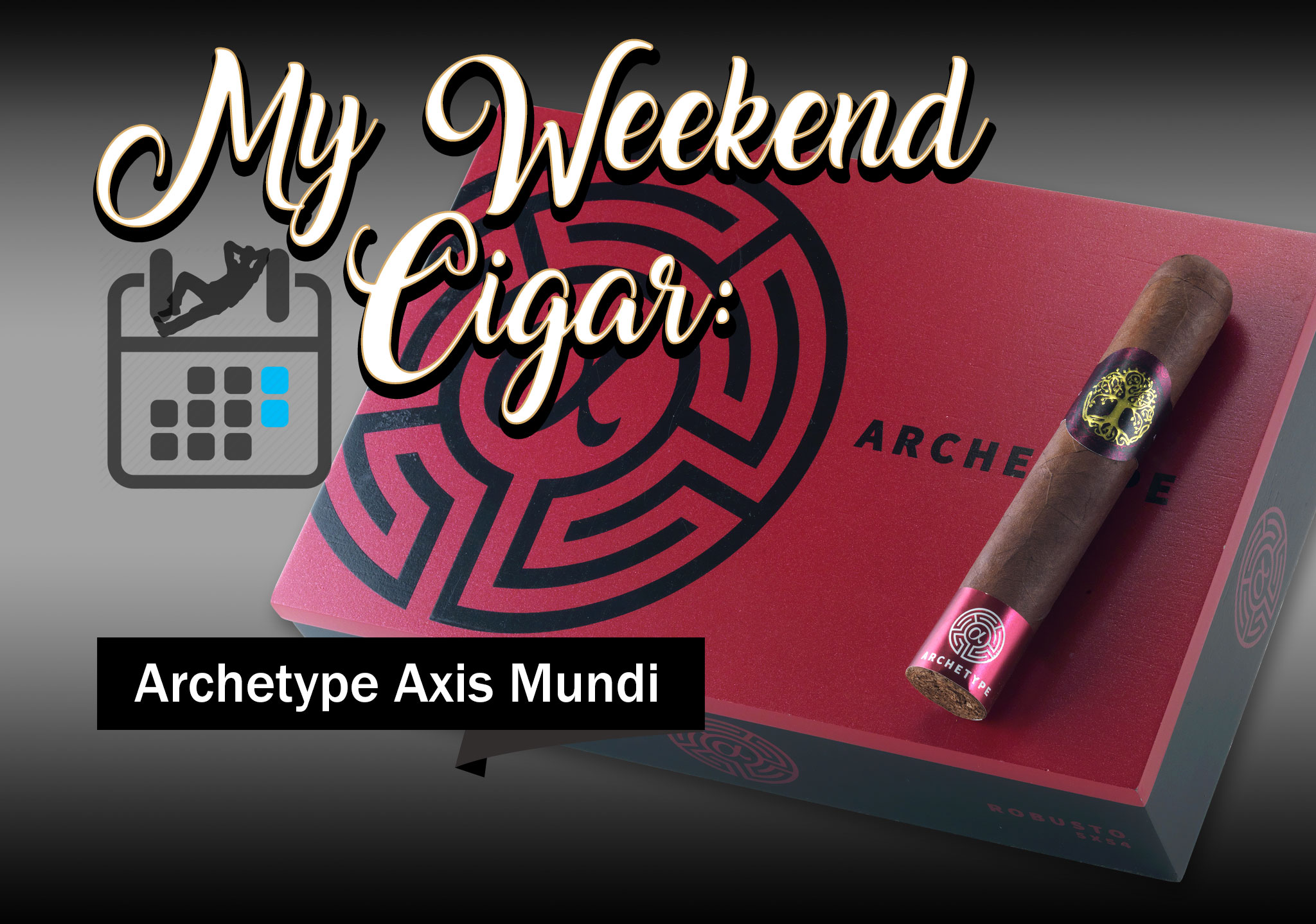 Axis Mundi is the point where Heaven meets Earth, but it also represents the repeating characters, symbols or archetypes said to recur in people’s dreams, or similar objects/symbols that appear in the myths of various cultures. Sounds like something you’d hear on George Noory’s “Coast to Coast AM” radio show. But we’re talkin’ tobacco here, so let’s come down to earth and I’ll tell you why this cigar lived-up to its #13 ranking for the Top 25 Cigars of 2017…I smoked it on a Sunday afternoon in the Famous Smoke Shop retail store.

My Experience: This wasn’t my first Ventura cigar (I posted a review of the Archetype Strange Passage in 2016) – but it was my first Archetype Axis Mundi, and I admit that one of the reasons I chose it was for its Top 25 rating. (It’s that curiosity thing.) For my 6″ x 52 Toro, the Ecuador Habano wrapper had an even Colorado brown hue top-to-bottom with an appealing oiliness (the reddish hue in the picture doesn’t do it justice), the cap cut perfectly, and the draw was effortless. Moving on, the first few puffs were peppery, but soon rounded-out to notes of earthy spice, oak, and raisin. That’s pretty complex for just about the first inch, but more was yet to come.

As it wound its way into the second act I began to feel the full-bodied nature of this blend yet, it was also smooth and balanced as more flavors began strutting their way in. Some pepper returned but brought with it additional notes of vanilla caramel, cashew, some cocoa and a smattering of coffee bean.

The third act is where the full-body of this cigar really hit me…I was also getting hit with a lot of flavors: more oak (though a little more charry this time), spice, cocoa, a tangy note of raisin, coffee bean, and even a little sweetness would peek in here and there.

Suffice it to say . . . if you’re going to smoke the Archetype Axis Mundi Toro, you may want to have a couple of years’ experience on you. And be prepared for at least a 2-hour session because you really want to take your time with this one. It’s about as complex as a cigar gets, and offers lots of heavenly pleasure. Of course, different palates are going to taste different things, but there’s enough for everybody as it runs the gamut of spice, wood, earth, coffee, cocoa, nuts, raisin, and more. The price is decidedly upmarket – but if you get everything out of yours as I did from mine, you’ll find it well worth the investment.

Reading Time: 14 minutes The most verified Sakasquatch sightings are recorded in our DT&T Essential Buying Guide! We cover nine of the company’s finest marcas, including 2 available only at Famous Smoke. Learn more about these top-rated cigars inside!