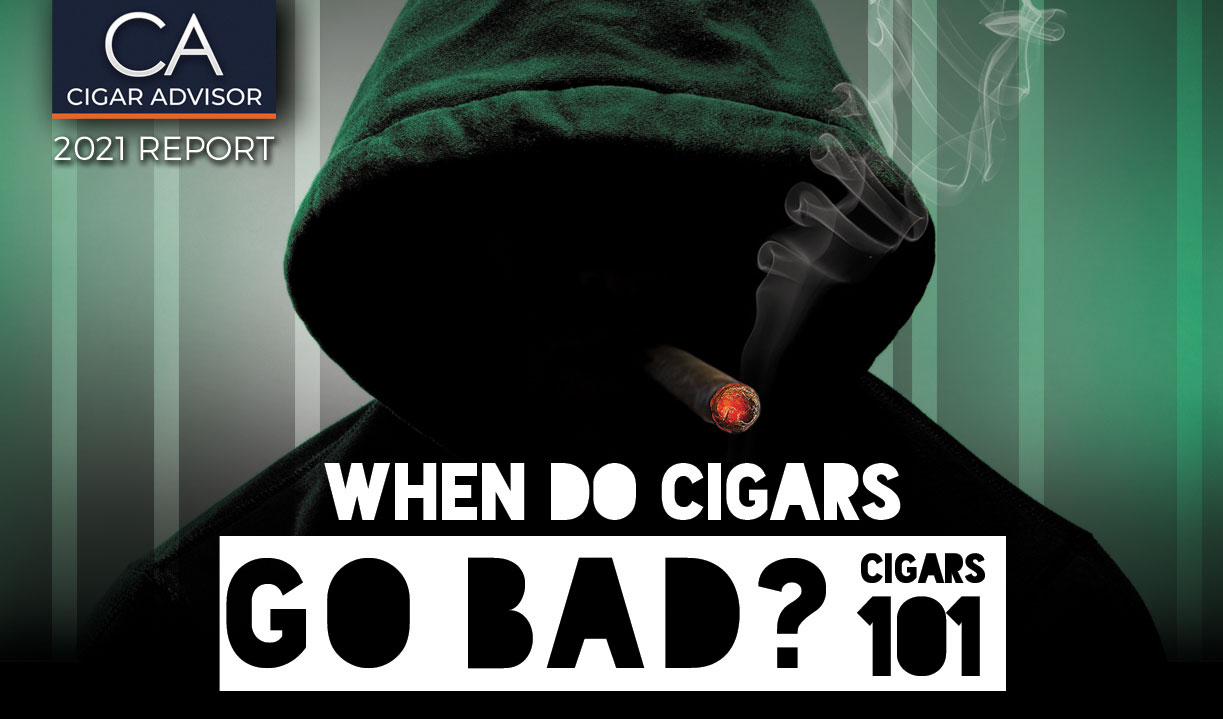 How Long Do Cigars Last?

Short answer is, premium cigars will last sometime between “about a week or two” and “forever.”

If properly stored, a cigar can last decades and still be ready to light and enjoy.

If not, a cigar could go bad and be unsmokable in as little as 7 days. 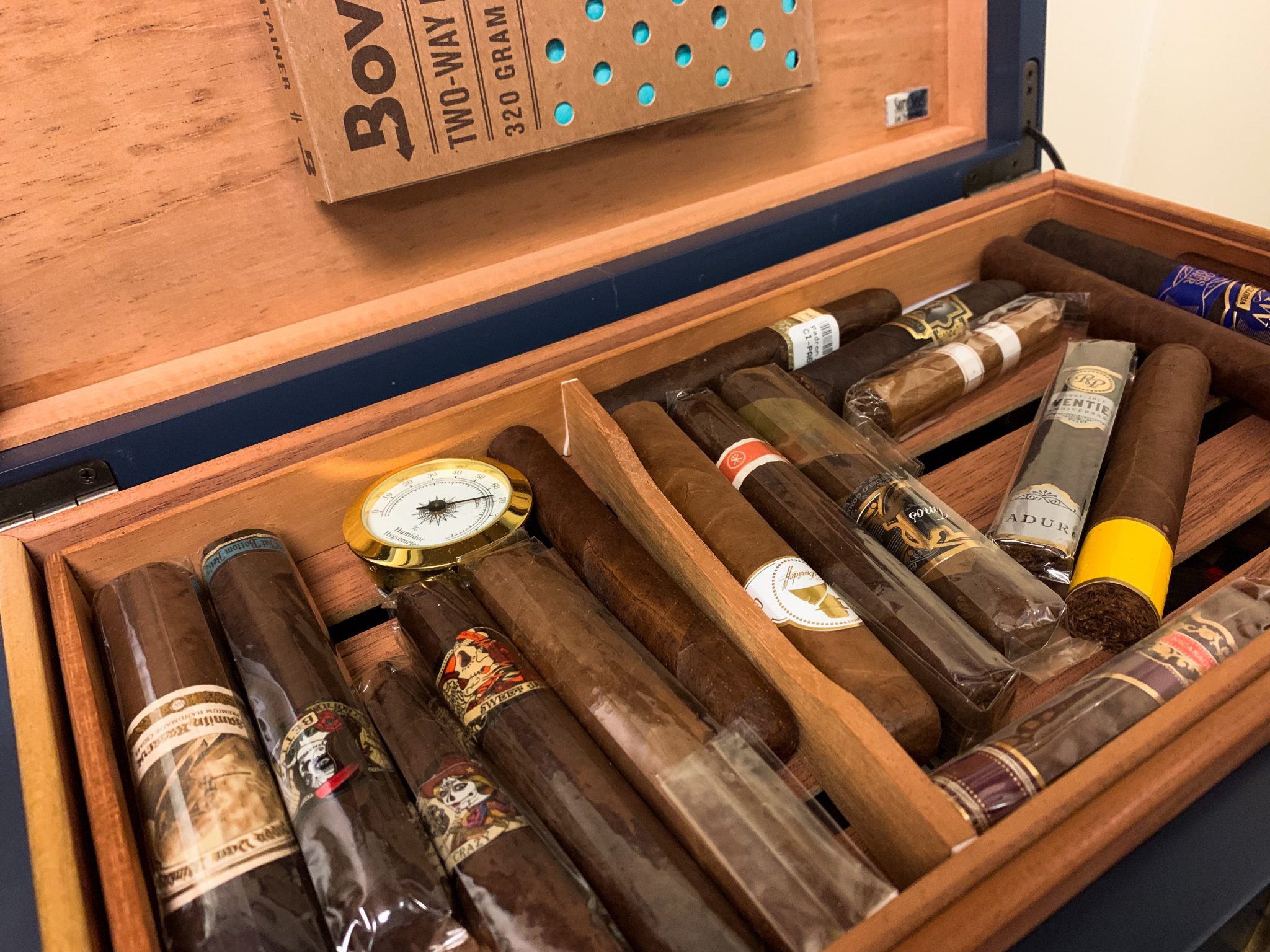 We get two kinds of questions when it comes to determining the lifespan of a premium cigar.

First is when wives or friends of cigar smokers are trying to find a birthday, wedding, or Christmas gift for their loved one. Their concern usually is, “How long can I keep them/will they last until it’s time to give them their gift?”

Very thoughtful, and very appropriate to ask if you’ve never bought cigars for someone else.

The other kind of question we get…usually starts out something like this:

The inevitable follow-up also asks our opinion if we think the cigars are still ok to smoke, or if there was any way to salvage them. The answer to a lot of this is “it depends.” But if you have to use the word “salvage,” then your odds already aren’t looking very good. Here’s why…

How Long Are Cigars Good For?

Let’s say Uncle Arthur brought you back a half a box of Cohibas from his Tijuana vacation last year…How long they’ll last before they “go bad” depends on a few factors. First and foremost, it’s access to a stable storage environment. Cigars get stale and dry when they’re not kept in a humidor of some kind. Without the appropriate care, the tobacco’s oils will disappear, and the nicotine content will dwindle. 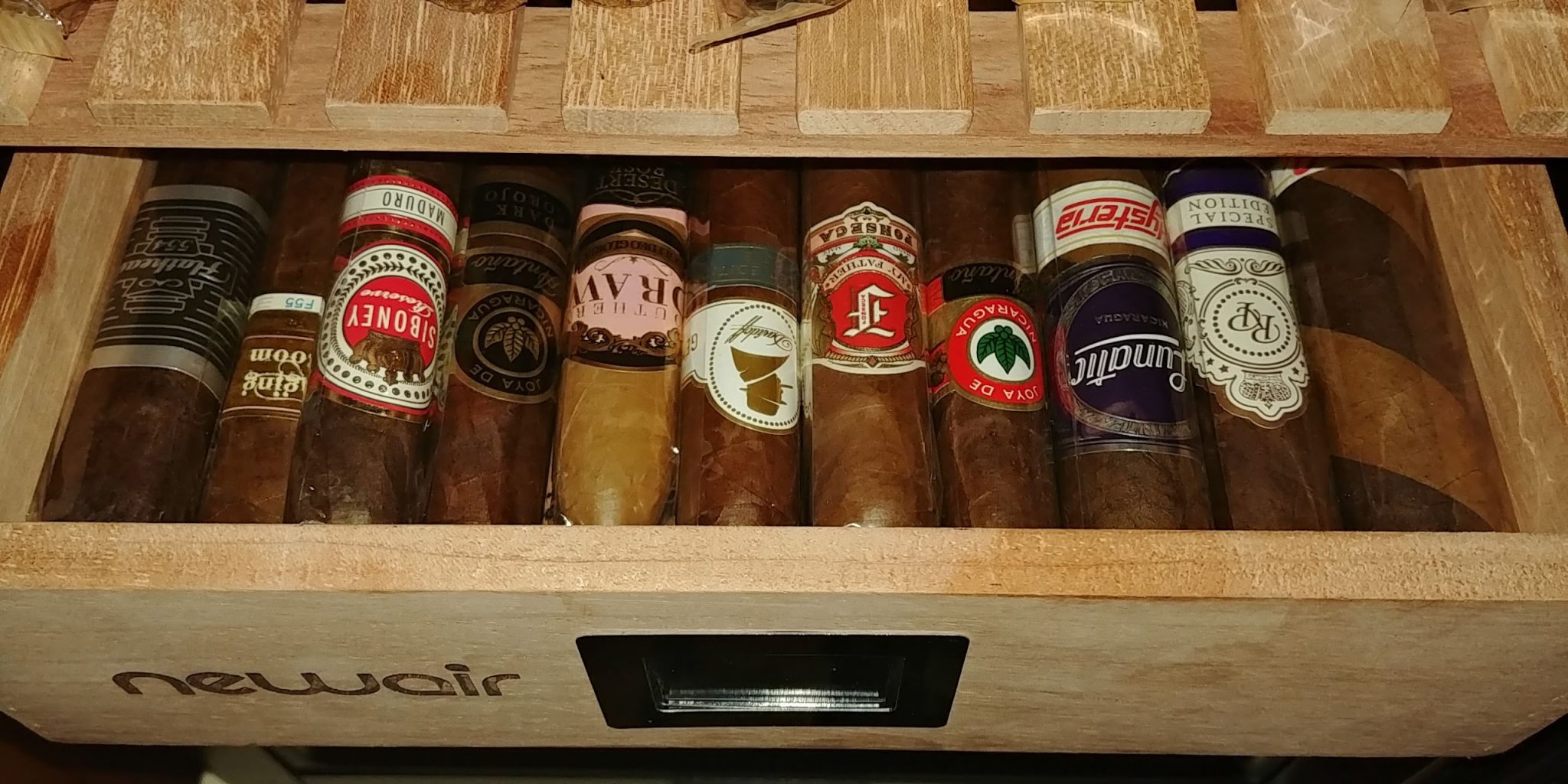 Similarly, that humidor full of Montecristos that your sister’s now-deceased ex-husband left behind in 2016 won’t be in prime smoking condition if the humidor hasn’t been maintained or isn’t functioning properly.

Cigars “go bad” when they are stored improperly, and the tobaccos have dried out. (The opposite – too much moisture, for too long, in too high a temperature – will result in mold.) As a cigar dries out, it begins to lose its natural oils and sugar, its nicotine content, and its flavor.

It’s actually what prompted this Cigar 101 thought…I was going through some old cigar boxes and empty tubes. Or so I thought: somehow a few loaded tubos got mixed in with my empties, and I wound up finding a couple of dried out cigars: 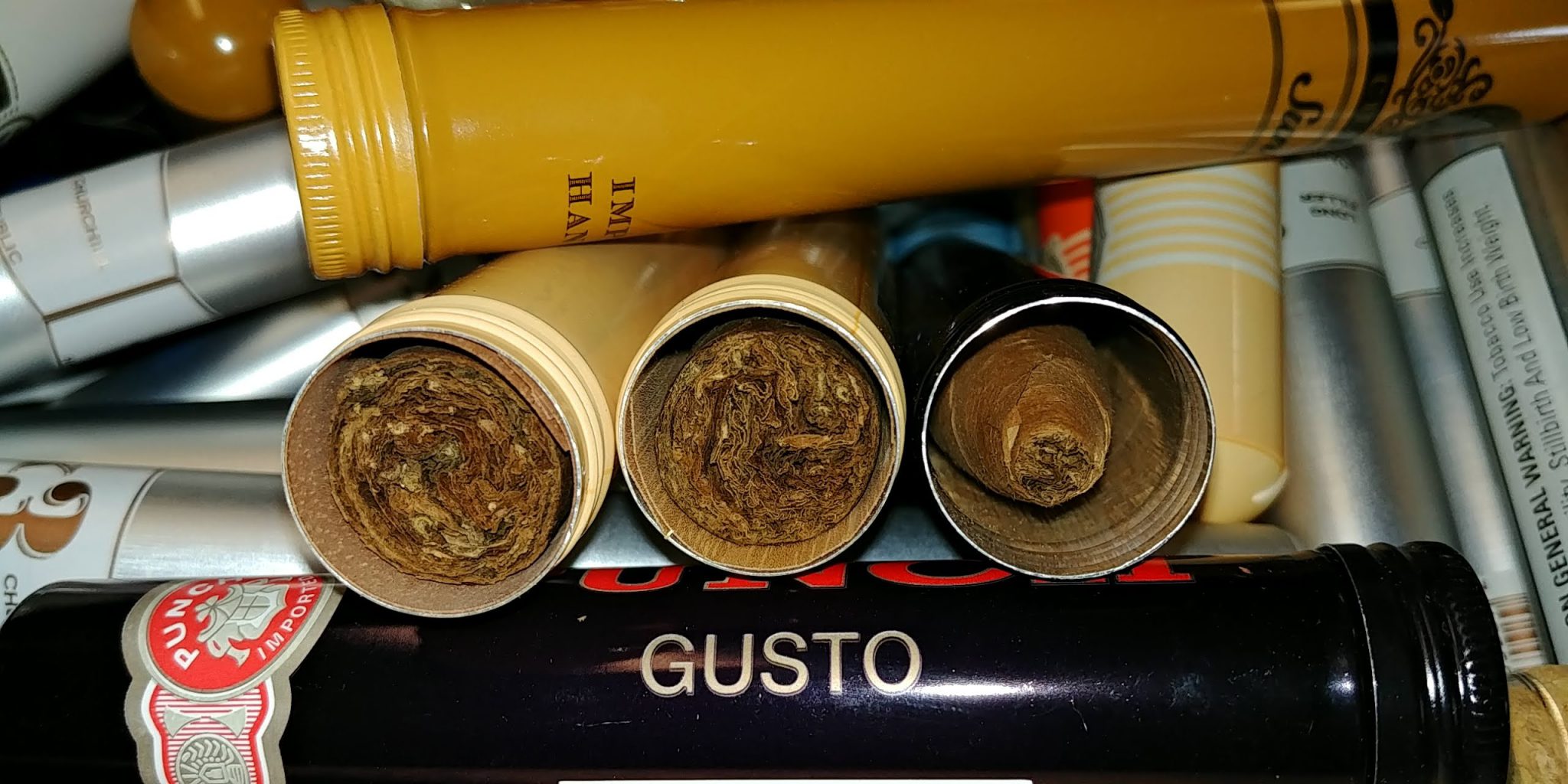 So let’s say you find a box of cigars from a few months or years ago that, for whatever reason, never made it into your humidor. They’re dry, maybe a little brittle. One or two may have even started coming apart. The tobaccos need consistent (and sufficient) moisture to keep them fresh and enjoyable.

If you were to try to re-humidify them, there’s a chance you could breathe some life back into the tobacco – but there’s no way to revive the oils or the nicotine. Once they’re gone, they’re gone, which means you could say these cigars “went bad.”

How Long Do Cigars Last in a Humidor?

If they’re kept in prime condition, the cigars in your humidor should last indefinitely; they may even outlast you. There is even a niche market for vintage (like really well-aged/old) and pre-Embargo cigars. We’re talking antiques – but they’re perfectly smokable, because they’ve been kept with the care they needed to stay in prime condition. Cigars that are over 50 years old can be in perfect smoking condition, looking as though they were rolled just last week. Jared explains more:

As a matter of fact, most of the cigars you buy are already aged. They may get anywhere between 60 days and a few years, according to the manufacturer’s specifications. Their goal is to have those cigars ready-to-smoke when they land on your cigar shop’s shelf.

The cigars will age even further while they sit in the retail humidor or warehouse. Some boxes can sit for 2 to 3 years on top of the manufacturer’s aging period before they ship to your house.

So does that mean your cigars will go stale because they sat in the humidor too long?

On the contrary, they probably got better.

Separate but related is the fact that even though a cigar can last a long time in proper storage, the flavor profile of the cigar will change. And often, it’s a positive change – this is the argument for aging cigars. Each stick is different, but many Maduros will  get a bit smoother over time. Connecticut wrappers might get a little more mellow and velvety. High-priming tobaccos like Ligero might start to lose some of its bite after about 1-2 years, maturing from a powerhouse into a more well-rounded and full–bodied smoke. 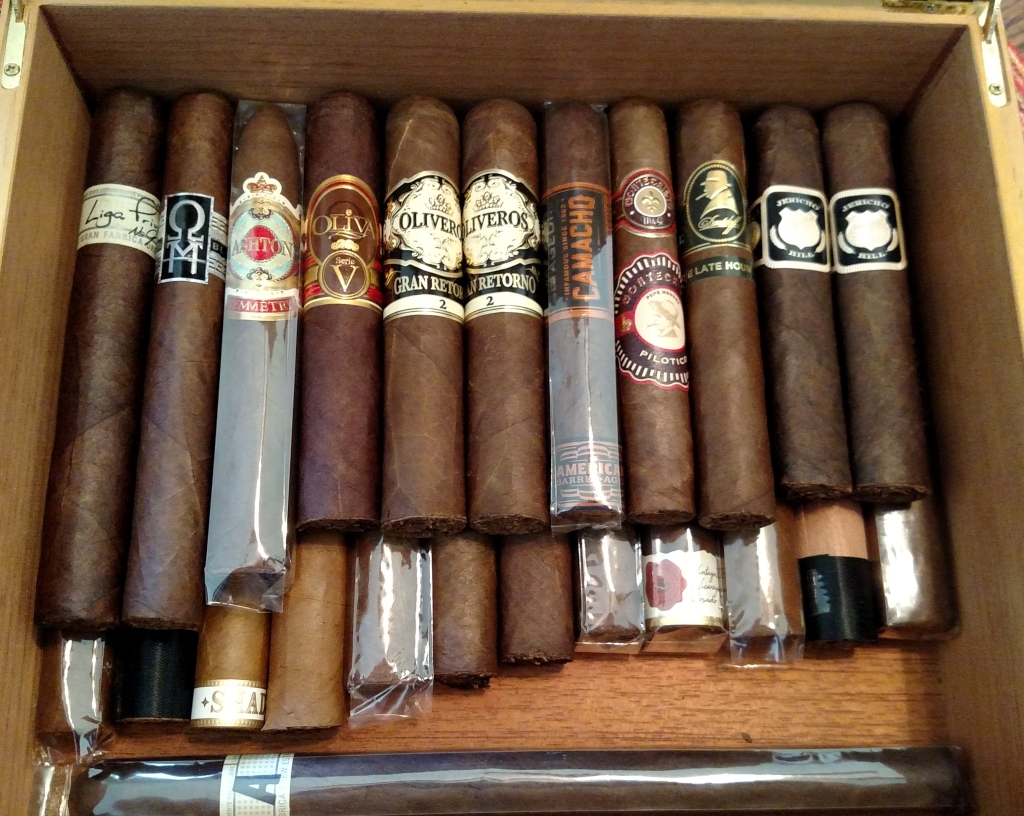 Eventually there is a point at which aging peaks, and the tobacco’s flavors will no longer change. That depends on the particular cigars: some say that stronger blends peak at about the 10-year mark, while milder tobaccos don’t fare as well under lengthy aging. So if you have a box of mellow cigars that you plan to put away for a while, it’s probably best to smoke them within 5 years.

Now – can you still smoke them after 5 or 10 years beyond those dates? Certainly! And they’ll burn great. The only “but” is that the cigars may not have maintained the flavor you expect. Your palate will detect that and tell you.

I have a box of cohiba coronas especiales , the date code on the botom of the box is from 1986. thay are a bit soft , can they be smoked or what should i do with them.

Should pre packaged cigars, such as Backwoods honeyberry be stored in a humidor? If so, do you remove them from the packaging?

I left a couple of monte white in my truck in a partially opened sealable bag with a couple of humidifier bags at about 40 degrees for a week. How much is that going to affect them?

Best way to find out is give them a little squeeze at the foot and in the middle. If they have some give to them, they’re probably fine. If they feel very hard and brittle, they didn’t make it.
But I bet they’re in pretty good shape. As long as they didn’t dry out, the flavor profile shouldn’t be affected. Best thing is to light one up.
G-~

Keep the Plastic Wrappers on or not in the Humidor?

I keep mine on but I cut the bottoms so they are open to the humidity.

I have a converted wine cooler humidor. I am having trouble getting the humidity above 60%, because the humidity in my house is at 36% typically in the winter. In the other seasons it is no problem to get it up to the preferred 70%. I live near Houston and outside the humidity is around 76%. I can leave a cigar in the ashtray outside for a day and it gains the needed moisture. Do you have any suggestions to increase my humidity? I have four good sized containers of distilled water in the bottom of the the humidor.

I have done the same and live in a very dry desert climate. Make sure that you cover over all of the fan vents in the wine cooler. I have little trouble keeping mine at 65% humidity.

Thank you for that advice. Sent I sent the question, I decided to remove the cigars and prime the 6 wooden trays, that hold as many as 50 cigars with distilled water after. It has already brought the humidity up to nearly 90%, but I think it will drop as the cigars get some of that moisture. I feel better about my situation than when I ask the question. Thanks again for your reply.

20 years ago my wife bought me romeo and juliet cigar in a tube. Thought it was empty all these years. Can I still smoke it? Was not kept in a humidifier. Stayed in tube in a drawer.

Hi Demetri –
Well, if it’s still fresh then it’s a miracle. When you take it out of the tube, you’ll know right away. Gently pinch the foot and if it crumbles, you gotta problem. Or if it feels light and hard like a stick. That said, if there’s any life left in it at all – because even a tube can’t preserve freshness for that long – you could try to re-humidify it but even if you could bring it back, it’s most likely not going to have much if any flavor since the oils in the leaves have probably dried-up. But stranger things have happened, so check it out. (I would ask your wife to get you another for your next anniversary.) G-~

I moved to central FL – higher humidity than other States year round, with temperature in my home variying between 72 in winter to 79 in summer. I use a Humidor, and was keeping it’s Humidity around 68%. Then I noticed my Cigars (mostly mild blends with lighter wrappers) were never staying lit (I don’t get much enjoyment from re-lit Cigars). Research indicated they may be too “wet.” I changed Humidor environment by adding food grade Desiccant packs to it to reduce humidity to 64%. That has led to a degree of success in most now staying lit, but the taste now suffers (fully rotated all older cigars out, all new ones are in). None of my cigars are older than 6 months.

What’s going on, or what can I try next? I have noticed when I go t my local Smoke shop and buy and smoke immediately, it’s always good.

Also, I use an electronic Hygrometer, and I test it periodically be moving it to different environments to ascertain it is still working.

Would hate to give up convenience of “at home” smoking.

Read More
Cigar Ratings & Reviews
La Aurora Escogidos cigars are one of the most classic blends in the Dominican stable; watch our review video for this very special, limited-edition smoke.
Read More