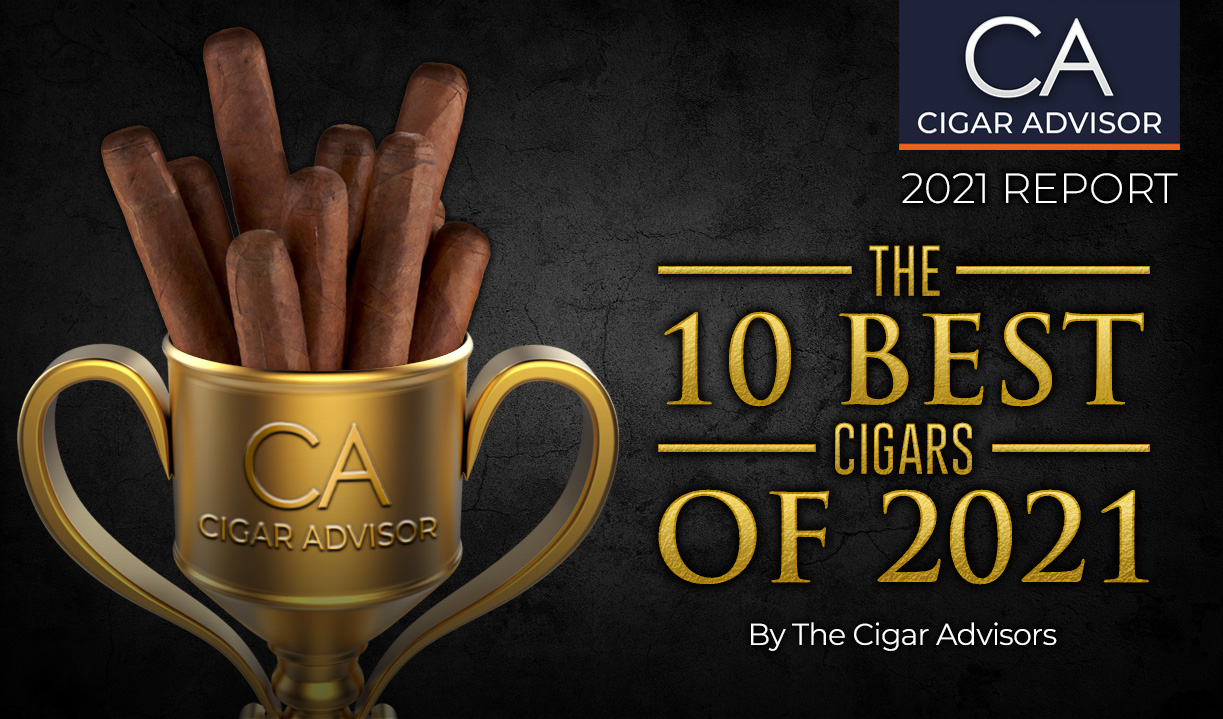 CIGAR ADVISOR’S TOP 10 CIGARS OF THE YEAR: THE BEST NEW CIGARS OF 2021

One of the most looked-forward to things of the year for us avid cigar smokers are the Best Cigars of the Year lists. The thing is, I’m never sure we want to know what cigars made the cut as potential buys, or whether we just want the personal satisfaction of having smoked and liked some of the winners during the year. I can tell you one thing: after the lists are published, sales of those cigars increase exponentially. And the so-called, “#1 Cigar of the Year” becomes a booster rocket; just try catching it.

While some other zines publish lists of 25 cigars—as we’ve also done in the past—this year we whittled it down to 10. Additionally, all of our selections are new cigars, making this a true Best Cigars of the Year compilation.

It’s not easy to choose 10 great cigars, let alone 25. Or to put it another way, there are just as many cigar candidates to wade through regardless of the size of the list. There were also just as many ashtrays and desk chairs thrown as in previous years. But kidding aside, when we first submitted our individual picks several cigars were unanimous right off the bat. That was encouraging. It was the remaining cigars on our lists that started the fracas.

A few expletives and many much-needed cigars smoked later, and we had the list you’ll see below.

Is there a 10 Best Cigars of the Year Sampler?

Because we get this question every year, we would love to do an annual sampler of our Best Cigars of the Year; thing is, we can’t. For one, some manufacturers won’t allow their cigars to be included in samplers. Secondly, it’s a supply issue, especially cigars that are limited editions and small batch runs. There just aren’t enough singles available to include them all.

And now for the list—drum roll, please… If you decide to try one or more of these cigars, please share your experience in the comments below.

So why do we love AVO Syncro Caribe? Because this cigar is loaded with flavors that are like a Caribbean vacation for your senses. We’re talking citrus, spices, sweet wood, and much more. Caribe gets this menu via tobaccos from the Dominican Republic, Ecuador, and Nicaragua. And it’s one that we lit up again after the cameras stopped rolling from our first review. Worth a second look, just in case you missed it.

Sometimes you’ve got to go off the beaten path to find hidden treasures. One such ‘X’ on our map was Black Label’s Last Rites Viaticum, a cigar oozing with fruity, floral notes that go big on pepper yet finish squeaky clean. Black Label has always been one of our favorites among boutique brands and Last Rites is proof that small batch blends smoke just as good…if not better…than any brand name.

One treat we look forward to every year is Crowned Heads’ limited edition Las Calaveras release. While we don’t all agree on which year’s LC is best, we certainly agree that the 2021 edition deserves a spot in our top 10 cigars of 2021. Thanks to the blend’s bouquet of Nicaraguan core and Ecuador Sumatra wrapper, spicy, sweet, and tangy are the Las Calaveras’ trifecta flavor foundation that’ll keep you coming back for more, just like it does for us.

Drew Estate knows how to go big. And they certainly did with Liga Undercrown 10—celebrating the 10th anniversary of the Undercrown brand. When we tried Undercrown 10—the most dressed-to-kill cigar (including double bands and a vertical yellow ribbon over the cap) in the brand’s lineup—we were immediately struck by the deep, layered, and evolving profile. We all detected notes of sweetness with cappuccino, nuts, and baking spices. Our consensus was Liga Undercrown 10 ranks up there with some of the best cigars to come out of Drew Estate.

When the HVC Serie A was announced as the next blend in Famous’ Exclusivo cigar series, we got excited. The original HVC Serie A was immediately memorable for the notes of caramel, nuts, creaminess, and cedar and the Exclusivo—in the exclusive Toro vitola—made this profile shine. We all commented that the Exclusivo had some of the best characteristics in the original Serie A, but in a more subtle and nuanced way. HVC Serie A Exclusivo puts its premium Aganorsa leaf long fillers at the forefront and is a cigar of resounding depth and complexity.

Kind of like Goldilocks’s favorite porridge, Perla del Mar Corojo hits just right—not too sweet, not too spicy, and not too full. We’re all fans of the Corojo wrapper and the new JC Newman Perla del Mar didn’t disappoint. Rather, it surprised us. This cigar made us notice and reevaluate a brand we overlooked for too long. Savory and rich notes of cocoa, cedar, and earth remain textured, balanced, and full throughout this surprising smoke. We were united in the opinion that Perla del Mar Corojo is a sleeper cigar and a blend that will take a lot of enthusiasts by surprise.

With flavors that remind us of sugar cookies, cream, cinnamon, and graham cracker, La Gloria Cubana Medio Tiempo almost tastes like it’s fresh from the pastry section of your favorite bakery. The cigar is made from a blend of tobaccos that span five countries, including rare Medio Tiempo tobaccos, for a sweet tooth-lover’s dream – one of the finest cigars we’ve smoked this year, for sure.

If you’ve seen our pictures, you already know we’re well-acquainted with the fine art of over-indulging in street tacos. And like its namesake, Rojas Street Tacos Barbacoa made us give the heave-ho to the notion of enjoying this cigar in moderation. This blend struck us with its balance of earth, cedar, and pepper with accents of dark coffee, cedar, pepper, baking spices, and raisins. Our consensus—and not ours alone judging by how quickly it disappears from shelves—is that Street Tacos Barbacoa is not only a great cigar but one that’ll help Noel Rojas become a household name.

Gary called Romeo y Julieta Eternal’s medley of molasses, nutmeg, earth, and citrus flavors a “perfect cigar” in his #NowSmoking cigar review, and that’s a rare level of praise coming from any of us. To achieve its richness and balance, the blend is wrapped in a dark, natural wrapper that underwent more than two years of fermentation. Romeo always delivers, but Eternal was most certainly their 2021 standout.

Southern Draw Manzanita—the brand’s magnum opus—draws its name and inspiration from its red tinted Hybrid Habano wrapper. Manzanita, meaning ‘little apple,’ tantalized us with a full and smooth flavor profile including notes of pepper, nuts, baking spices, and cream. While a lot of cigars try to impress by crushing the palate and cranking up the power, Southern Draw Manzanita stays full-bodied but smooth, without becoming overpowering. And we all agreed on its “can’t miss” status.

I’m going to have to try the Romeo y Julieta Eternal. Especially after the review Gary gave the cigar.

Thanks for reading, Seth. Let us know
what you think!

Reading Time: 4 minutes Gary goes Limited Edition and settles down on the patio outside Famous Smoke Shop, #nowsmoking the LC46 for his Crowned Heads Las Calaveras EL 2019 cigar review. For his impressions and more on this VERY in-demand LE cigar, click here.