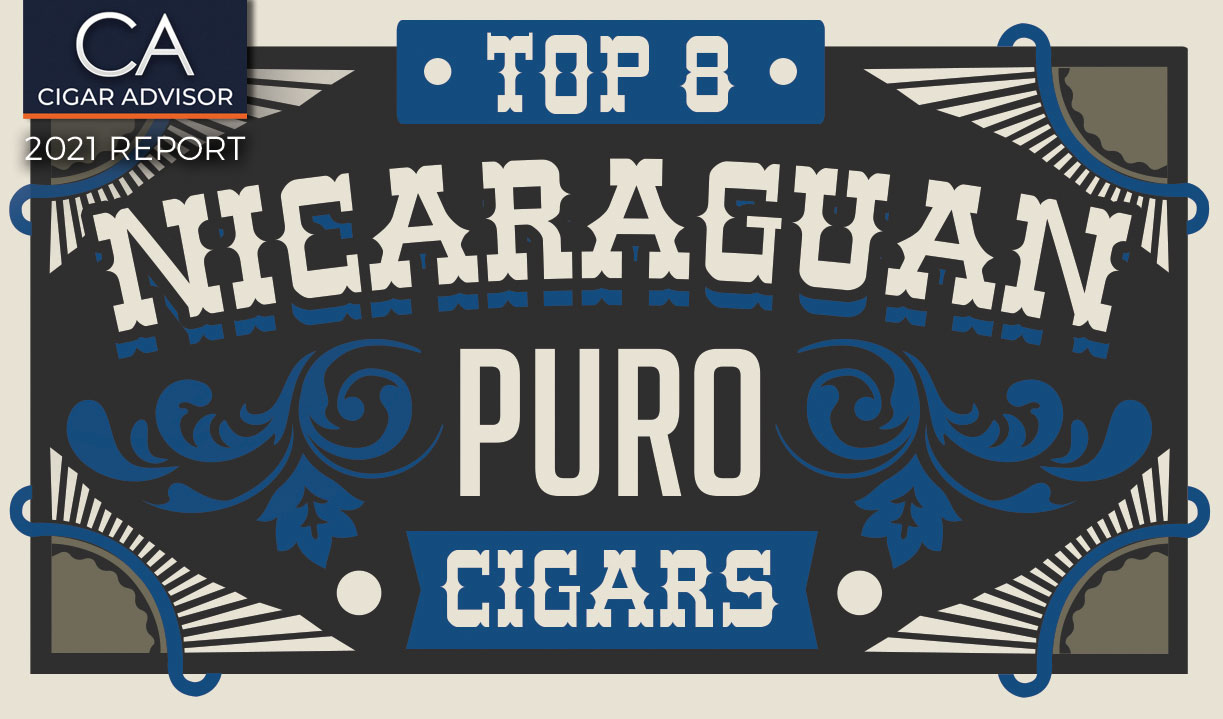 8 Nicaraguan Puro Cigars You Must Smoke


No disrespect to the Dominican Republic, Honduras, or Cuba for that matter, but when it comes to puros, Nicaragua reigns supreme. Considering the soil quality, climate, and the variety of terroirs scattered throughout Nicaragua, it’s no surprise that many of the best puros are born there. Some of it also has to do with the fact that the majority of premium cigars made today come from Nicaragua.

Nicaragua is strewn with rich volcanic soil, ideal for growing just about anything, especially tobacco. Yet aside from puros being rolled entirely with native-grown tobaccos, they’re not that much different from cigars made with tobaccos from more than one country. And if you think it takes a multination blend to give a cigar complexity you’re in for a pleasant surprise. That’s another one of Nicaragua’s advantages. A good master blender can create some impressively complex cigars thanks to the country’s three primary growing regions: the Estelí, Condega, and Jalapa valleys, plus, Ometepe, a little volcanic island situated on Lake Nicaragua.

To recount some of what I wrote in a 2014 article, What You Need to Know About Nicaraguan Cigars, Estelí sits in one of the highest tobacco growing regions. The soil is very dense, cakey, and pitch black. Add the extra sun exposure it receives, and the leaves grow thicker and stronger in flavor. Estelí is also ideal for growing extra strength ligero filler and savory Habano wrappers. AJ Fernandez cigars have a reputation for their use of spicy Estelí tobaccos.

The Condega Valley has more cloud cover. The soil is coarse, fairly cakey, and very high in mineral content. Tobaccos grown in this region tend to have a thinner texture, some sweetness, and offer a fair amount of power. Many binders tend to come from Condega, as do some sun grown wrappers.

The Jalapa Valley has very thin, sandy, and slightly reddish soil. It’s very similar to the soil in Cuba’s famous Pinar del Rio Valley. Jalapa provides some great wrapper tobacco. It tends to be slightly reddish in hue, quite aromatic, and sweet in flavor. Perdomo’s Sun Grown cigars offer some of the best examples of top-grade Jalapa wrapper.

Then there’s Ometepe. It’s volcanic soil has given the tobaccos grown there a reputation for being naturally bold. But when properly cured and age, they take on an earthy sweetness that a lot of cigar smokers enjoy. A great example of Ometepe leaf blends can be found in the Aging Room Bin No.2 cigars.

You may also notice that many of the wrappers are listed as “Habano.” That doesn’t mean they’re all the same leaf or strain. It means that they were all originally grown from Cuban seed that has adapted to Nicaraguan soil.

The Nicaraguan puros in the list below span the entire range of body and strength, and have some of the most intriguing flavor profiles. These cigars also have pretty high customer rating scores, too.

The 601 Steel selection was added to Erik Espinosa’s bestselling 601 line in 2014 as an exclusive to Famous Smoke Shop. The 601 Steel Rod’s Nicaraguan wrapper is a gorgeous, thick-skinned Habano Oscuro with a worry-free burn that reveals long, gravity-defying ashes. Though unabashedly bold in strength, the smoke is creamy-smooth, issuing a well-balanced mix of earth, pepper, chocolate, and woodiness on a long finish. Geared toward more experienced smokers for its full body, the 601 Steel Rod delivers much more bark than bite, making it easier on the palate. An irresistible choice at a nice price, especially if you’ve had all the other 601s.

Also tailored to more experienced palates, when it comes to Nicaraguan puros, the Diesel Estelí Puro selection is an all-Estelí leaf blend and way up there with the best. The Diesel team calls it a bold, complex, “one-of-a-kind cigar that took more than three years to produce and embodies the spirit of Estelí Nicaragua.” The wrapper is from AJ’s Finca La Lilia, while the binder and fillers were grown on his San José and San Lotano farms, respectively. Elegantly creamy, hearty, and spicy with a peppery finish, the Robusto is rife with core flavors of earth, nuts, molasses, oak, and cocoa. A must for every Diesel disciple.

Let’s start with this very cigar scored a 93 and took the #8 spot for the Top 25 Cigars of the Year list for 2017. If that sort of stuff doesn’t impress you then maybe this will—and for a number of reasons. Named for Warped Cigar’s Kyle Gellis and TABSA’s Max Fernandez dogs, this classic Lonsdale is blended entirely with Aganorsa Leaf tobaccos. The Jalapa Corojo ’99 wrapper is stunning, and the closed foot will give you a tasty preview of what’s coming. Medium-bodied and complex, the smoke is uber-creamy issuing well defined flavors of almonds, baking spices, oak, and a cinnamon finish. If you’re looking for a true artisan-style puro, this is it.

Now a regular production cigar, what sets the Joya de Nicaragua Antaño 1970 Gran Reserva apart from its Antaño 1970 cousins is the five-year-aged filler tobaccos; they’re older in age, and the difference is mighty impressive. The smoke is much creamier, perfectly balanced, and full but not as bold, even with some punchy ligero in the filler. The flavors include brown sugar, nutmeg, cedar, baking spices, an occasional nip of pepper, and an curious fruity note. And since we’re talking about puros, the good folks at JDN call this line “the quintessential Nicaraguan cigar.” A delight for every cigar smoker’s palate, this cigar pretty much lives up to that remark.

In doing my research I learned that this now classic cigar scored an astounding 97 points! Named for the late José Orlando Padrón’s birth year, the Padrón 1926 line has a bit more strength than the Padrón main line and 1964 Anniversary selections and a well-rounded flavor profile. Offered in Padrón’s traditional box-pressed format, all of the tobaccos have been scrupulously aged for five years. The result is a memorable mix of cocoa, coffee bean, cashew, nutmeg, well-tempered pepper, and a pinch of cherry. Plus, the maduro wrapper provides an added dash of sweetness. If you’re looking for a puro among puros for a special occasion, tap the No.9 Maduro.

The Plasencia Reserva Original selection is one puro worth smoking if only for the fact that it’s blended entirely with organically grown tobaccos. Although some of the pre-Colombian farming methods used to grow the tobacco date back 500 years, I doubt they have what someone called the “very same taste that captivated the Europeans when they arrived in the New World,” but we get the idea. One thing’s for sure, the smoke is the purest you’ll ever taste. Ultra-smooth and medium bodied, cedar dominates the flavor profile along with notes of caramel and almonds. With its razor-sharp burn, great balance, and nubbable charm, the Robusto is a great place to start.

When these Rocky Patel Nicaraguan cigars first arrived at Famous some many years ago—they’re exclusive, by the way—I remember being very impressed with the Toro. This hidden gem performs really well, too. The Habano wrappers are perfectly aged offering a smooth sail throughout. On top of that, the burn is excellent, the smoke is exceptionally creamy, and the flavors are well-balanced. Light up this puro and you’ll find a savory mix of baking spices, pepper, earth, and a fair amount of sweetness. Sometimes Rocky gets knocked for making so many cigars; most are Nicaraguan blends, too. But if you’re in the market for an all-Nicaraguan blend, this cigar is one of the best of the bunch. It’s medium-plus body and affordable price also make it much more accessible to a wider audience.

There was a time when it seemed like just about every new cigar released had “Nicaragua” attached to it. That went for the Romeo 1875 Nicaragua selection, too. Et tu Romeo? Well, it turns out it was a pretty good idea. Starting with a caramel-colored Habano wrapper, these puros are made by Plasencia Cigars S.A. (That was another good idea.) The construction is first-rate, the smoke is medium-full, very creamy, and provides a sweet n’ spicy flavor profile with additional notes of earth and pepper. Romeo loyalists will enjoy its consistent quality with the many other Romeo y Julieta cigars made outside of Cuba. The Toro is a bold, zesty, and refined smoke great for enjoying late in the day or after dinner.

Can’t get enough of that Joya De Nicaragua Antano 1970!

Reading Time: 5 minutes Onyx Reserve cigars have enjoyed a very loyal following; now, this modern classic gets kicked up a few notches with the Onyx Esteli, created by AJ Fernandez. An all-Nicaraguan core gets treated to an almost pitch-black San Andrés wrapper; it sounds tasty on paper…but did Onyx Esteli pass our panel’s taste bud test? Watch now, and find out!

The Basics: How Long to Age Cigars