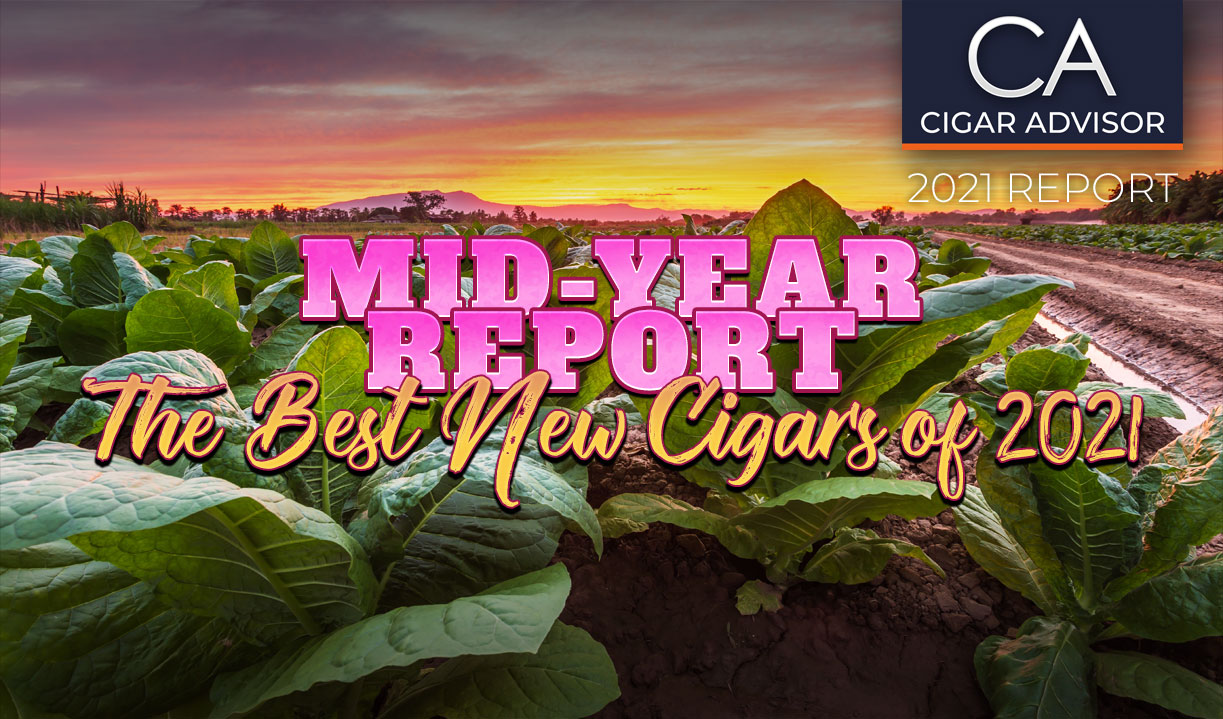 THE BEST CIGARS OF 2021, SO FAR – THE ADVISOR MID-YEAR REPORT

Which new cigars should you be smoking in 2021?

We’ve got 10 top new cigar recommendations that span major players like E.P. Carrillo and Montecristo, along with boutiques from Crowned Heads, Illusione, and more.

Why are we showing your 2021 top cigar picks in June?

We’re not showing all of them. The full list will come in December.

But every year, we wait until after Christmas to see which cigars make it into the coveted Top 25 Cigars of the Year list. What a terrible time for that announcement. It’s winter. It’s cold. No one wants to be outside smoking.

So that got us thinking…what if we talked up our favorite sticks when it’s actually sunny and warm? That’s why our ‘Best New Cigars of the Year (So Far)’ series always drops in the heart of summer. 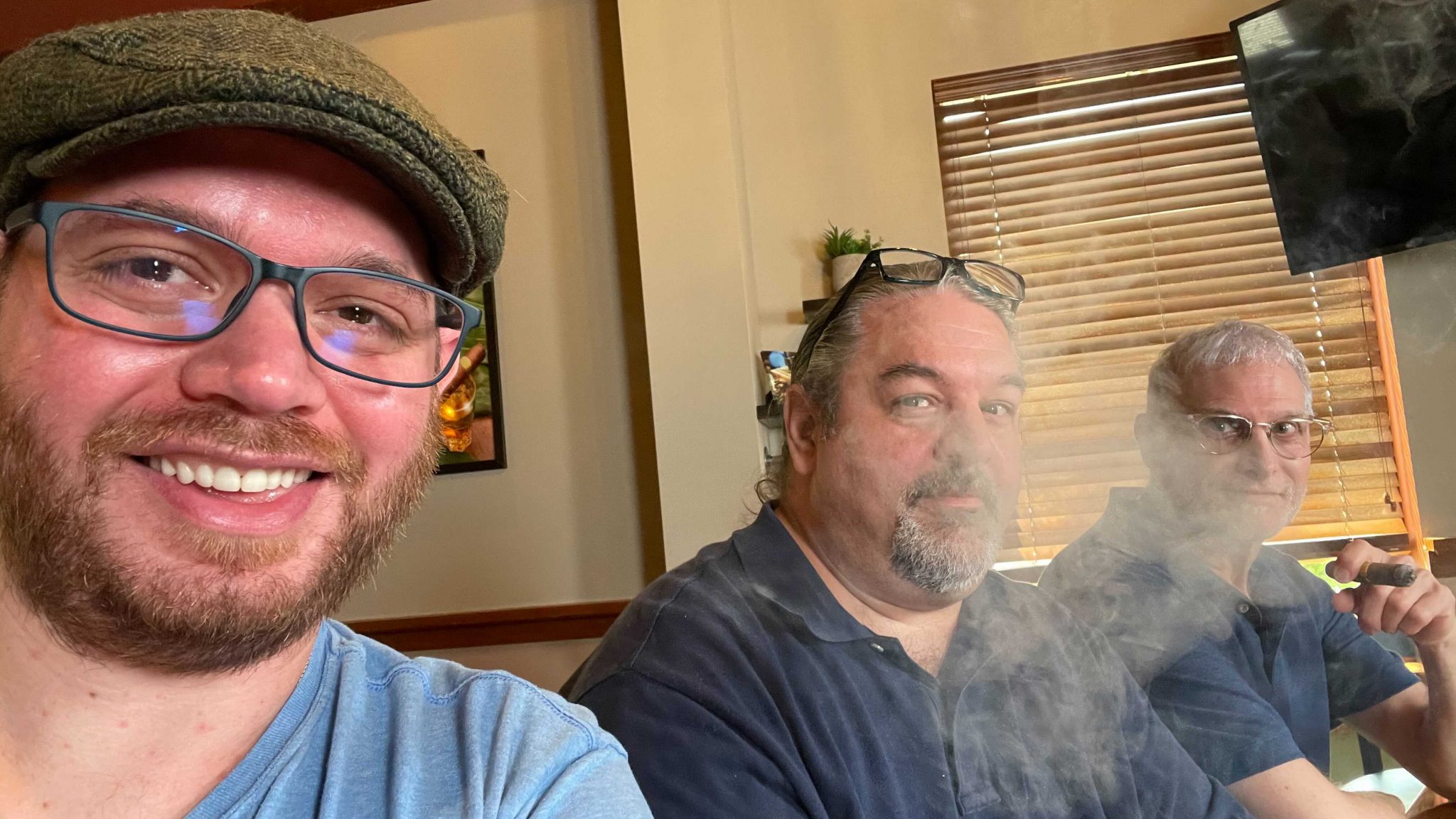 Our goal is to share with you the 2021 cigar releases from our Top New Cigars series that have wowed our taste buds – while the smoking weather is still prime to enjoy them!

With the fine print out of the way, we hope you find a few gems in this list to give a permanent home in your humidor. Because introducing you to your next favorite cigar is why we do what we do.

Have you smoked a new cigar that you think should be on this list? Tell us about it in the comments below.

Crowned Heads’ boutique cigars are always crowd pleasers, but they took it to another level with their new blend, Mil Dias. There’s plenty of spice from its Ecuador Habano wrapper, and tobaccos from Nicaragua, Peru, and Costa Rica round out the blend with a rich blanket of flavor – think roasted coffee, sweet tobacco, fruit, and baking spices. Gary recommended you pair it with a 15-year Glenfiddich single malt for extra smoothness. Schedule some time for this…you know…actually make plans to smoke it. The last thing you want is to be interrupted while enjoying your Mil Dias. Just taste it and see!

A carryover from 2020, it came along late enough that most didn’t get a shot to smoke it until after the new year…but then it was gone in the whirlwind of Cigar of the Year excitement. When you’re overdue for a little you time, E.P. Carrillo Pledge will give you a super-premium, #1 Cigar experience for less than $10 a stick (on publish date). Refined, creamy, salty and sweet, notes of coffee and caramel – this little candy bar of a cigar has it all. All that flavor comes from a hybrid Connecticut-seed Habano wrapper grown in Pennsylvania, a binder from Ecuador, and bold Nicaraguan long filler leaves. If you’ve been missing out on this blend, they’re finally back in stock – so it’s high time you got to enjoy one yourself!

As I pointed out earlier this year in Top New Cigars, Illusione Garagiste Short Robusto seems tailor-made for the beach. It smokes sweet with a nutty, earthy profile that dishes out plenty of gusto thanks to a Nicaraguan Ligero core, plus some sweetness and spice from that triple-A Ecuador Habano wrapper. If you’ve got a vacation – or even just a weekend shore getaway, the pint-sized Short Robusto size makes it travel friendly, but still smokes long enough to give you 45 minutes of flavor. And if you’re staying put this summer, it’s great on the patio, too.

Released in April, this new La Gloria Cubana Medio Tiempo cigar line represents a literal example of what medio tiempo tobaccos are capable of. Sprouting above the ligero in very small quantities, and only under certain conditions, make these leaves especially rare. And the sun grown Ecuador Connecticut Habano used in this blend is drenched with a honeyed flavor all its own. Medium in body, the Toro reveals a pitch-perfect medley of cane sugar, roasted nuts. leather, coffee, and buttercream. The smoke also supplies a provocative number of bold strokes along the way. I nominate it as one of the best examples of premium cigar blending and a must smoke.

Macanudo’s artisan cigar line, Inspirado, has a new family member in the form of the Macanudo Inspirado Brazilian Shade selection. Made in only two shapes, the Toro offers another example of the heights tobacco growers can achieve with today’s science. This medium-bodied smoke features two special leaves. The shade-grown Brazilian wrapper grown from Connecticut seed is a clean and silky blonde, while at the core is a proprietary hybrid, “Dominican Cubita” which gives the medium-bodied smoke its spicy snap and aroma. Both are a first for the brand, too. Well-balanced flavors of nuts, sweet tobacco, cream, sweet earth, leather and white pepper dominate. For me, it’s one of the most impressive Inspirado additions among the six.

Who do you call if you’re trying to replicate a nearly 90-year-old cigar blend? Easy. You call the Grupo de Maestros to ensure it’s one of the finest cigars in the Montecristo catalog. Together with Rafael Nodal and AJ Fernandez, they selected a secret blend of Nicaraguan tobaccos that give off full-bodied notes of wood, black coffee, earth, and some seriously sweet spices. It’s one hell of a great way to end a long day – just watch you don’t burn those fingertips trying to get every morsel.

At the end of 2020, J.C. Newman revamped their most popular Nicaraguan cigar line, Perla del Mar. Enter this year’s model: the Perla del Mar Corojo. If you like big, diplomat size smokes, let me introduce you to the “Tampa-style” press – a first for the line. The company also gave a nod to the cigar’s Pinar del Rio pedigree by coating it in a spectacular Corojo wrapper. This one’s from Ecuador, with a healthy, tanned leather appearance. Nuts, sweet tobacco, and leather lead the charge in this creamy, medium-bodied gigante, with cameos by nutmeg, cinnamon, and toasty notes. If J.C. Newman ever made a real Perla de Mar standout, this is it.

This 2021 debut from Southern Draw is not only a stunner, but the Southern Draw Manzanita line is also arguably the most outlier release from Robert Holt and AJ Fernandez. There’s a party goin’ on inside this “appley-named” selection crafted with “undisclosed” varieties of Pelo d’Oro, Corojo 99, Habano, and ligero. They’re real good tobaccos, too. Repeated sessions with this Robusto have convinced me that this cigar is a magnum opus. Robust in body, the cigar’s velvety smoke reveals evenly balanced layers of sweet earth, leather, wood, and tart apple, flanked by sweet and peppery spices.

Easily one of the stronger cigars we’ve enjoyed this year is Trinidad Espiritu No. 2. And for what it’s worth, it’s one of the few pepper bombs we’ve tried lately that isn’t just potent for the sake of getting a punch in your man card. The cigar has a buffet of flavors like red peppers, black coffee, salt, and natural woody sweetness thanks to a Brazilian Arapiraca wrapper and Nicaraguan core. And who to tap to pull off a cigar that’s equal parts strong and tasty? AJ Fernandez, of course. A big meal first is certainly not required…but heavily recommended!

Announced in April and emblazoned with eye-catching yellow bands, the Zino Nicaragua really blew me away. We’re talking a medium-bodied, uber-creamy cigar aimed at cigar smokers who crave earthy flavor profiles with a sweet-spicy character. Made in three seamlessly rolled shapes—Robusto, Toro, Short Torpedo— the line’s four nation blend stars tobaccos from Davidoff’s most mature bales. Bright notes of pepper, cedar and coffee open to leather, cream, salted nuts, then to light coffee, sweet spices, and chocolate. I found the Toro to be pretty much a virtual cigar milkshake. All three come in boxes of 25 and four-cigar fresh packs. And if you thought Zinos were over your pay scale, look again.

The Aganorsa, Guardian of the Farm, Nightwatch… The Diesel Delirium AND Crucible, and Aging Room, Bin No. 2, C Major.

All excellent choices, Orlando. Thanks for reading!

I was at the Easton store last week and purchased a Macanudo Inspirado Brazilian Shade Toro. The tobacco was Green on my palate and I threw the stick out. The E.P. Carrillo Pledge Prequel just does not have the flavor profile I like. This is what happens when 90% of what I smoke are Cuban’s. But I did pickup a box of Andalusian Bull at the store and Yummy!!!!

Sorry about your Brazilian Shade experience Joe. Sounds like you either got the clunker in the box, or the cigar was just too young for some reason. It does have a lighter taste, especially at first, so maybe it’s not for you, but I would think the Pledge would be up your alley. The Andalusian Bull is still a hot ticket, so glad you found that one. G-~

I’ve been enjoying the El Gueguense robusto by Foundation Cigars. It’s been my go to for about one year! Nice list here guys. Thank you much!

Yikes who made this list. Some of these cigars score right at the mid 80’s mark

Reading Time: 4 minutes Gary gets together with Espinosa Cigars’ Jack Toraño for this Laranja Reserva cigar review; More than a deep dive on this high-scoring cigar, you’ll get an overview of Espinosa’s top-rated cigars, plus some secrets to the company’s success.