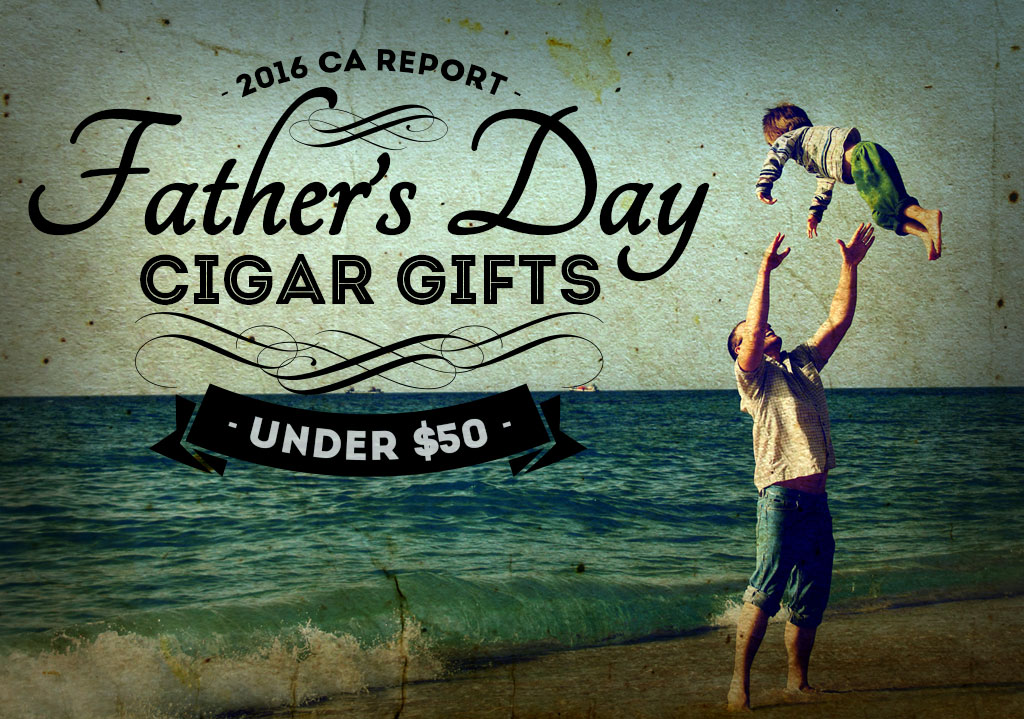 Father’s Day Cigar Gifts for $50 and Under

Let’s face it – certain holidays are more cigar friendly than others. Although cigar enthusiasts appreciate a leafy gift on almost any occasion, it’s generally a birthday smoke, a Christmas stocking stuffer or a Father’s Day cigar that fits the bill best.

Being that we still have some time until Dad’s big day, it was time I issued the Editor’s Challenge to my fellow Advisors: “if I gave you access to the humidor and a set spending limit, what’s the most meaningful combo you could assemble to give your dad?” Easier said than done, of course…not only are there a plethora of Father’s Day cigar options, but dads have different wants and tastes. And to make it interesting, I scaled back the total dollar amount each of our guys gets to spend…not because we’re cheaping out, but because you know how dads are…“what’d you go spending all that money for?”

So if you’re on the hunt for a Father’s Day gift under $50 that will still show the love better than any canned Hallmark greeting can, consider these cigar ideas – they’ll do nicely.

Chances are you already know what cigars your Dad smokes most of the time. But when it comes to giving cigars as gifts, I like the idea of being unpredictable. So, with only a $50 budget to work with, it’s gotta be really unique, really good, and something Dad may not ordinarily buy for himself.

Enter the “Best of Crowned Heads” Jericho Hill sampler. Listed at $35.40 (on sale for less), this savory quartet features one of the best blends from the critically-acclaimed, Crowned Heads Cigars.  Each Jericho Hill cigar is box-pressed for a longer, more flavorful smoke, and the blend, created at the My Father Cigars factory in Estelí, Nicaragua is nothing short of stunning. And although it’s listed as “full-bodied,” the smoke is closer to medium-full, and far from overpowering.

Created as an homage to the late Johnny Cash, Jericho Hill boasts a dark, Mexican San Andres wrapper chosen as a nod to “The Man in Black,” while at the heart of these cigars lies the most select Nicaraguan long-filler and binder tobaccos. Additionally, the names of the four sizes in the set were inspired by the music & lyrics found on Cash’s classic live album, At Folsom Prison.

The smoke offers a rich, creamy, and perfectly-balanced taste profile issuing flavors of earth, sweet spice, cedar, oak, toasted almonds, cocoa, and some herbal elements, all of which vary more or less depending on the shape.

For what it’s worth, the Jericho Hill selection is my personal favorite in the Crowned Heads stable, not only for its flavor, but all four sizes smoke with an effortless draw and an even burn. Considering the quality, flavor, and price, this sampler is a good buy, plus it’s got that “outside the box” element to it that I noted above. After you checkout, you’ll have enough cash left over to pick up the Johnny Cash At Folsom Prison CD. Give it to Dad with the cigars, so he can listen to it while enjoying his Jericho Hill’s.

Father’s Day is a celebration. It is an opportunity to raise a glass to my old man…Senior taught me to change a tire, tie a tie and a whole heap’s worth of life lessons I chose to ignore at my own peril. Since he’s also the one who gave me my first sip of beer, it’s only fitting that I return the frothy favor and kick up a beer-happy Father’s Day cigar gift to the man who showed me the ropes.

Let’s start with the cigars. Señor and I have indulged in more than a few whiskey and beer sampling sessions lately, many of which have ended in a hazy bonding over racy stories about family members. So why not pair the brews up and mine this gold for all it’s worth? As perfectly mated with craft beers as they are alone, the flavors in this 3 stick Perdomo Special Craft Series sampler wash over the taste buds as easy as Dad’s beer of choice; lucky for you, Perdomo takes the taste matching thought process out of the equation by basically telling you what kind of beer to drink with which cigar (it’s on the band and the box).

Ranging from mild to full, they were blended that way on purpose – which gets Pops into some serious beer choices for your next flight together, and is a leap of progress from the Stroh’s on which you were raised. Additional meaningful fact: besides having a savory portfolio of premium cigar choices, Nick Perdomo is a family man, through and through – and probably would nod with satisfying approval at your choice of his cigars as a gift for your Dad.

A good cigar gift should include some useful accessories. Sure, Dad probably has a lighter – but if he’s not a serious cigar smoker, a humidor might be a little over the top (and over your $50 budget). All he needs are the Basic Necessities…which is everything that’s included in this aptly-named accessory kit:

The bad news: the Basic Necessities Kit has been discontinued. The GOOD news: you can replace it with the Elite Level Starter Kit (click to see), which includes HumiJar humidor, torch lighter, butane, double guillotine cutter and ashtray – all for less than the cost of the original.

It’s time to put some serious thought into Father’s Day, people… I mean, do you really think that Pop wants another oversized silk tie with a painting of a large mouth bass on it jumping from a pond? Whether it’s for the father figure in your life or for yourself (hmmm, a gift for yourself; go on…), every dad would love something awesome on his most special day. CIGARS – it’s the gift of relaxation that’ll put a smile on the old man’s face every time. And have I got the perfect pairing for pop that will indeed plant a Cheshire-like grin on the face – all for under $50!

Now, if you want something unique, there’s a new cigar created by the masterminds at Oliva called the Baptiste, a medium to full-bodied gem that pounds the taste buds with rich, aged tobacco flavor – but not too strong – just super smooth and perfect on the palate. On the inside this stick features a unique blend of tasty Nicaraguan long filler tobaccos while the outer wrapper sports a lush, oily, chocolate brown, Ecuadorian-grown Habano leaf. And the flavor profile is one to be savored with notes of dark coffee, sweet wood, and just a hint of pepper that makes this one a truly decadent treat. Famous has a 5-Pack of the Baptiste in a toro size (5 1/2 x 54) that’s perfect for Dad’s day!

So, you’ve got the gars but now you’re gonna need to cut the heads off those puppies before ya light ‘em. So, for the second part of this gift pairing, we’ve got a great new cutting device from Lotus called the Jaws Cutter. This baby is incredibly stylish and made of a weighty metal, having a solid feel in your hands. And best of all it features a serrated double blade that slices through the tip of your cigars with ease, giving your gar a smooth, clean cut every time. They’re available in a couple of cool colors, too – a sleek shiny metallic black, a school-bus yellow with black trim, or stoplight red with black trim.

It is indeed a dad’s most special time; so on top of the barbecue filled with grilled-up goodness, a great Father’s Day cigar and cutter pairing is truly the perfect gift. And the combined price for this ultra-high-quality pairing comes in at a mere $45.98. Smoke ‘em ‘cuz ya got ‘em!

My pops doesn’t smoke cigars, so I’m on the outs on what to get him this Father’s Day, but my uncle sure as hell does, and this year, I’m helping my cousin to get his old man something spectacular. Now I’m sure my colleagues are mixing and matching cutters, lighters, ashtrays, and a whole bag of summertime Santa goodies their Dads may enjoy, but I’m going to go a different route by picking something from Famous Smoke Shop’s extensive list of Boxes under $50 list. Sure, it may be simple; but if your Dad is like any of the guys in my family, simplicity wins over outrageous and elaborate gifts that take $20 in tissue paper to wrap and another $50 in man hours to unwrap. So this year, I’m boiling it down to three possible choices:

Partagas 1845 Crystal, $48.26/box: Ranked 94 by Famous Smoke Shop customers like yourself, which makes this find an absolute shocker of a deal. Ten cigars packaged in sealed glass tubes for a factory fresh taste from one of the oldest and most revered cigar makers in the world makes this an absolute no brainer in my mind.

Romeo y Julieta 1875 Churchill, $40.99/box: Another classic with a long and storied history, RyJ Churchills would be perfect for any golf loving Dad out there. With a mild-strength and medium flavor profile, this hour and a half and over smoke is the perfect companion on the golf course. And with a price tag so low, you might even be able to score the old man green fees for a twilight round of golf after Father’s Day Brunch.

Saint Luis Rey Rothchilde, $47.99/box: If you haven’t noticed, I’m hitting all the classics here. But why go with anything other than cigars that have a massive following with a flavor profile that has stood the test of time? The Saint Luis Rey Rothchilde is bold and beefy, sporting a swollen 5×54 ring gauge for a solid hour plus smoke time, and a full-bodied profile. That means big flavor with some pretty big strength to match from this Mexican San Andres wrapped cigar.

Do it – any of these boxes are a win-win all around.

Cigar Advisor Asks: What Was Your First Cigar?