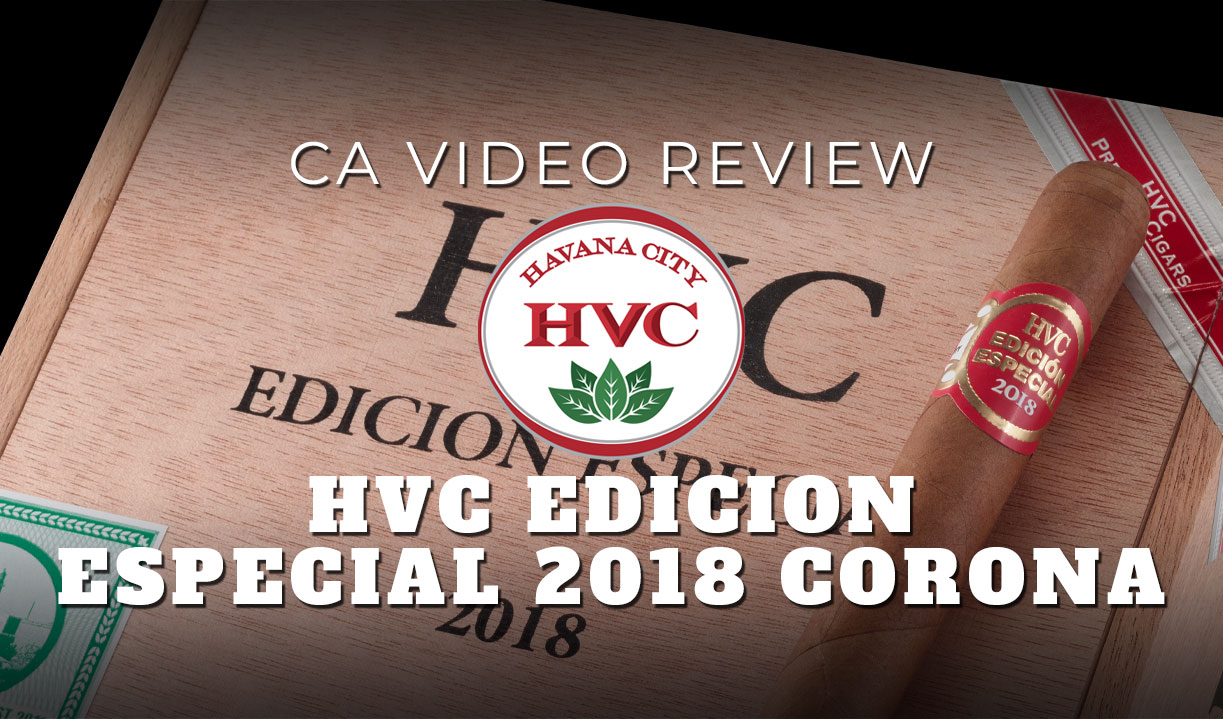 The HVC Cigars Back Story

Quickly becoming one of the most recognized boutique cigar brands among cigar enthusiasts, HVC was founded in 2011 by Reinier Lorenzo, and is so-named as an homage to Lorenzo’s hometown in Cuba, Havana City.

“Our goal is to keep the Cuban tradition of hand-made cigars alive and well,” says Lorenzo. “Our products are inspired by the cigar tradition of Cuba, specifically Havana City, while incorporating the customs of our adopted United States home.”

Handcrafted with specially-selected tobaccos grown on the Aganorsa estate farms in Estelí and Jalapa, HVC is committed to providing the finest Nicaraguan leaves for a rich smoking experience that is both enjoyable and unique.

The HVC Ediciòn Especial Corona (5″ x 46, below) is presented in a box of 50 cigars, the Toro (6″ x 52) is presented in boxes of 20 cigars, and both cigars are also available at Famous Smoke Shop in economically-priced 5-packs.

Construction and Overall Appearance: Reddish and golden-brown hue with a well-seated cap of three turns, and a smooth texture. Not quite seamless, but very close.
Draw (airflow): Slightly tight.
Pre-light flavor (cold draw): A bit grassy and sweet with a smidge of pepper that tingled on the tongue.
First few puffs: Much stronger initially with notes of pecans, almonds, and sunflower seeds.
Retrohale: Tangy and peppery, with hints of citrus.
Base flavors: Corojo sweetness, earth, spices, fresh bread
Aroma: Roasted and salted sunflower seeds
Burn / Ash Quality: The ash is a dusty grey and holds well throughout most of the length of the cigar, suggesting that the cigar is internally well-constructed and that the soil used was adequate in nutrients.
Balance of flavors: Nothing is taking center stage. Very well balanced.

Summary: With a sophomore attempt to recreate the magic of Ediciòn Especial 2015, HVC’s Ediciòn Especial 2018 moves forward by harking back to their 2011 First Selection roots with a Nicaragua Corojo ’99 Jalapa wrapper. For additional savory excitement, HVC gave the reins to the talented hands at Casa Fernandez (FYI, not AJ) and incorporated their acclaimed Aganorsa tobaccos into the binder and filler positions. I’m often castigated in the office for my love of Aganorsa (that’ll be 10 cents, Terence), so I’m pretty stoked to light this one up.

As soon as my torch kissed the foot, there was the distinct aroma of salty roasted sunflower seeds. This perception was also evident in the flavor, though there were other nuts in the mix like pecans and almonds.

The first few puffs of the cigar were much stronger than the rest. There was a heavy emphasis on pepper and spice, but it soon faded back into a nuttier profile as nuances of bread, earth and Corojo’s tell-tale sweetness began to surface. On the retro, I was able to identify a tangy pepper laced with a tinge of citrus and perhaps even a floral note or two. There wasn’t much in the way of deviation from this experience until the second half of the cigar.

Nearly on the nose at the midway point, there were drastic changes. Nuts and bread passed the baton to leather, earth, and a savory flavor that I wasn’t able to nail down to anything more specific than, “I like this.” The Corojo sweetness was more of a whisper now, but every now and then it reminded you that it was still there.

While not overly complex, the change in the second act wasn’t the most welcomed. I enjoyed the first half more than the second, but it’s not to say that the second was disappointing – it’s just a case where I would have preferred a reprise.

The final verdict is twofold. One, it’s certain that I’m going to smoke another one. The small disappointment I experienced was heavily outweighed by how flavorful this smoke was – spoiler alert, I nubbed it. Two, next time I get to smoke one, I’m going to do it with a beer – either a New Castle or Smithwick’s – because I think this cigar would pair perfectly with an ale, and those two happen to be my favorites.

Summary: This beautifully handcrafted Corona greets the palate with a startling blast of black pepper accompanied by earth, nuts, and some charred cedar notes. The smoke is dense and flows effortlessly through the head with each puff. The dominant flavor is black pepper, which rounds-out just past the first third, yet lingers on the finish throughout the entire smoke.

As the cigar moves into the second act, more flavors are unveiled, including leather and a hint of cinnamon. Puffing slowly is the key to discovering this cigar’s complexity and well-centered balance.

In the final phase everything is in full swing. Continuing to take time with this cigar, all of the flavors converge on a long finish. The pepper is still there, but slightly less evident as it falls-in with the rest of the mix.

Although tastes vary, I would not recommend this Corona to the new cigar smoker – not necessarily because it’s so full-bodied; rather, the smoke has a fine mesh of flavors that a less-experienced palate could miss.

To suit my personal taste, I would pair the HVC Ediciòn Especial 2018 Corona by balancing it with something that has some sweetness to it like cafecíto, a good Bourbon, or a dark Nicaraguan rum like Flor de Caña. On the other hand, Tommy’s Shiraz or Cabernet recommendation will work nicely. I also recommend smoking this cigar on a full stomach, as its non-threatening appearance actually delivers a heady salvo of Nicaraguan punch. (Stand-up too quickly and you may find yourself back on your butt just as quickly.)

Summary: If you’re not into boutique cigars, or haven’t heard the name, I assure you that you can smoke HVC with confidence – the HVC Edicion Especial 2018 is made with tobaccos grown by (and made at the same factory) the same people who make Aganorsa/Casa Fernandez cigars. Not familiar with Aganorsa? They’ve released a variety of highly acclaimed blends over the past few years, but the growing and brokering side of their company has been selling their leaf to a who’s who that are using the Nicaraguan tobaccos in their blends. Aganorsa is the Frank’s Red Hot of Nicaraguan tobacco – they put it in everything.

The HVC Edicion Especial 2018 starts with a pepper tsunami; after ¾”, things start to lay back as a mix of salty and sweet, plus dark roasted coffee and a peppery undertone. The smoke becomes very velvety with a roasted nutty aroma. There’s a bit of a graham crackery taste by halfway – coming down the home stretch, there’s a fatness to the smoke – it’s big, full and well-rounded.

Everything has an -y or -ish taste because there’s more than sufficient complexity, and the transition among those flavors is very smooth – it’s just a little hard to nail down some of the flavors and describe them as I sense them.

The flavors in this HVC EE are very warm, and this smaller size is spiked with peppery nuances throughout. It’s pretty bold – actually, very bold – as a Nicaraguan puro recipe under Corojo would promise. I left this sample with an inch and a half to go, as it sailed too far out of reach for me in strength. This is a pro-level smoke – and will definitely please you, if a cigar with dark, pepper-laced flavors is on your wish list.

Summary: For those of you who may not be familiar with the HVC line (short for Havana City), they’ve been making some terrific high-quality cigars for a little while now and the Edicion Especial is the latest creation to be introduced. And let me tell you, this little cigar packs one hell of a wallop from the very first puff. I’m not kidding, explosive flavor hits you immediately with a whole lot of spice and some pepper. But I also got a tangy citrus up front as well, a flavor that continued on for me throughout the smoke.

But, let me talk about construction first, because this is one hell of a well-made cigar that uses extremely good tobacco. Every damned puff from this diminutive stick produces a monster mouthful of thick white smoke with a very creamy mouthfeel. The ash is solid gray and it burns at a nice slow pace, easily lasting for over an hour.

My Cigar Advisor compadres seemed to have picked up a lot more pepper than I did, and were somewhat knocked for a loop. I won’t deny that it has a lot of power for a smaller cigar, which is one reason I’d really like to try the toro, as a wider ring gauge tends to smoke cooler as there’s more air flowing through.

It’s also amazing how a small smoke can have so much complexity as I got a heavy smack of nuttiness, wood, citrus, tart berries, and a slight floral component. That’s a whole lotta stuff going on in a 5″ x 46, and you can give some serious kudos to the blender for that. While the pepperiness dissipated after the first half inch or so, the strength actually did build, and when you get past the middle, you might want to slow things down a bit.

While this went well with my coffee, I’d love to pair this after dinner with a nice red wine like an Australian Shiraz that has a great profile of pepper and dark berries. To me, that’s one heck of a flavorful dessert.

I really like this cigar a lot and like I said, I’m looking forward to smoking the Toro size to see how it compares. It’s a cigar for a more experienced palate, one you want to take nice and slow as you enjoy the ride.

Read More
Food & Drink
Learn how to make a Havana cocktail with the "secret" house recipe from Leaf Cigar Bar! This is NOT your typical Havana - and neither is the smooth Drew Estate cigar we've paired with this nightclub classic. Get the recipe and watch how we make it with our simple Havana cocktail how-to!
Read More