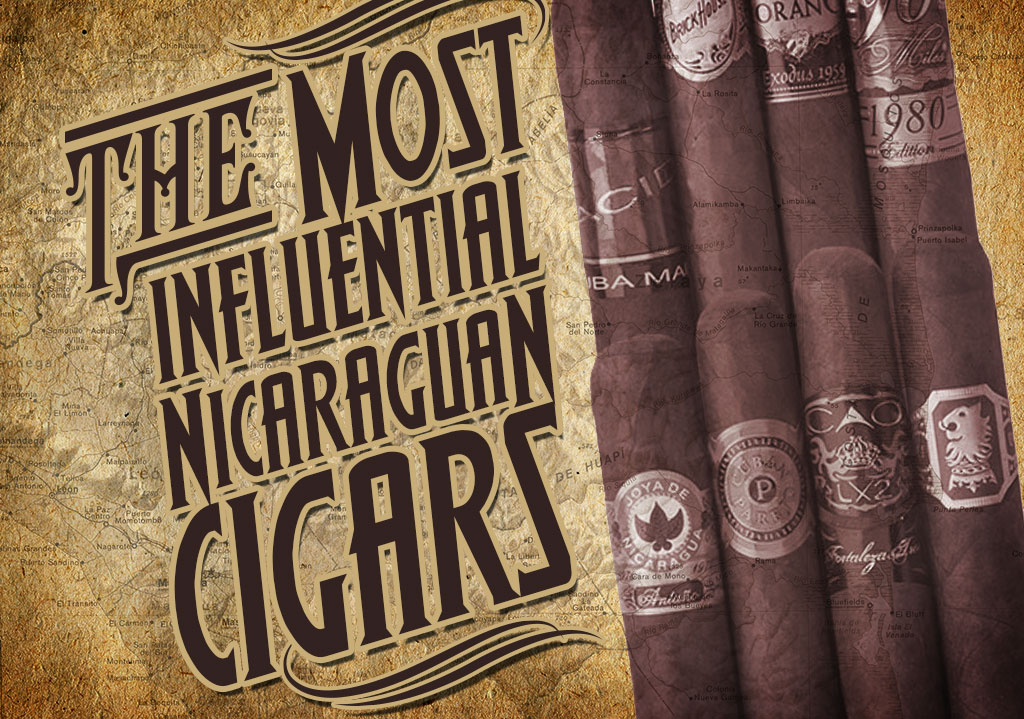 The Most Influential Nicaraguan Cigars You Should Be Smoking

Have you ever wondered if certain cigars can influence some of the other cigars you smoke? Beyond the 90+ rating scores, some cigars have had an impact on our cigar smoking trends and habits for other reasons. Not all that long ago, Lanceros were in vogue. Cigar smokers were willing to try them at first, but the trend never took root, even though a lot of blenders personally enjoy that shape. In the last several years, 60, 70, and 80 ring gauge cigars became popular, and appear to be holding steady. Other cigars have dominated the market more by reputation than by shape or size, like Fuente Fuente Opus X cigars, Padrón 1964 Anniversary cigars, Ashton, and in more recent years, Liga Privada No.9 cigars. What they have in common is, one, they’re all pretty awesome cigars, and two, they were the first of their kind at the time of their release.

Starting with Nicaraguan cigars made in-country, I elected to point out the “X factor” in these blends. Interestingly enough, the fact that these cigars are made in Nicaragua has had a major influence on both the industry and consumers. Why? Because most of the best premium cigars are now being made there. Ask just about any tobacco grower or blender about Nicaraguan tobacco and they’ll tell you that Nicaragua has the best variety of soils for growing great tobacco. For potency, it’s the tobacco grown in Estelí; for body and character, tobacco from Condega; and for wrappers that have a Cubanesque quality to them, tobacco from Jalapa is ideal. Want to put some extra ZING in your blend? Add some leaf grown in the ultra-rich, volcanic soil of Ometepe. Plus, there are numerous other locales in Nicaragua known only to certain blenders that produce even more excellent tobacco.

The eight Nicaraguan cigars that follow have been so impressive, either they have influenced other manufacturers to create similar blends, or cigar smokers have influenced others to try them to the extent that today they’ve become perennial “classics.” So, let’s have look, shall we…

The Acid Kuba Kuba was one of the first cigars introduced by Drew Estate for this esoteric brand. As the bestselling frontmark in the Acid cigars stable, not only has the Kuba Kuba established itself as the quintessential infused premium cigar, it also serves as the “gateway cigar” to all of the other Acid cigars, and most often the one that smokers of traditional blends reach for when they want something really different. The original blend uses a Nicaraguan core rolled in a Sumatra wrapper, but for this list, I’ve chosen the maduro version with a more flavorful Connecticut broadleaf wrapper. Suffice it to say, the Acid Kuba Kuba has become so influential, Drew Estate now makes it in four versions.

In 1937, Julius Caeser (J.C.) Newman launched Brick House to honor his family and heritage. The original Brick House cigars were Cuban puros handmade with the best Cuban tobaccos. The label had an illustration of the Newman’s home, the only brick house in their little Ohio burg and the town’s local tavern. Unfortunately, the brand ended when the Cuban embargo was enacted in 1962. 70 years later, J.C.’s grandsons, Bobby & Eric Newman, revived it as a Nicaraguan puro, and have since received so many accolades, they’ve never looked back. The blend also features an exclusive Nicaraguan Havana Subido™ wrapper that, when combined with the Nicaraguan long-fillers, yields a cedary smoke laced with fruity notes and sweet spice.

Following in the wake of their successful CAO MX2 (“Maduro times two”) edition, which debuted in 2003, the CAO LX2 (“Ligero times two”) hit retail cigar store shelves in 2008 with another new blending “first.” Rolled in a sun grown Nicaraguan wrapper, the kicker for this selection was their use of two hearty high-priming ligero leaves – one Dominican, and one Nicaraguan – for a full-bodied, high octane smoke that set the bar for the countless ligero-laden blends that followed. In addition to its affordability, the “Rob” offers a perfectly-balanced powerhouse of earthy, woody, and spicy flavors, and currently holds a “91” tasting score by Famous Smoke Shop customers.

Started in 1916, 1959 was the year the Toraño family’s tobacco growing operation in Cuba had increased to 17 farms. It was also the year that every tobacco farm and cigar factory was nationalized by Castro’s new Communist regime. The result was an exodus of many Cuban cigar families, including the Toraños. The Toraño Exodus 1959 “Gold Edition” was the first of the Toraño Exodus series to commemorate these families’ post-Revolution impact on the cigar industry. Using a rich-tasting, well-balanced blend of Honduran, Dominican, Mexican, Nicaraguan and Costa Rican tobaccos, it’s hard to pick one up and not think of what these renowned Nicaraguan cigars represents…For some, it may be the hardships of the Cuban people since 1959, but for me it says: “Take THAT Fidel, and try topping this!”

Flor de Gonzalez Cigars may have had a later start than the Toraño family, but the Gonzalez’s share much in common with them. FdG’s founder, Arnaldo Gonzalez, learned the tobacco growing trade from his father and grandfather in the fields of Las Villas in Santa Clara, Cuba. Yet, by 1980 the Communist regime had made his life so unmanageable, he left the island. Reestablished in 1993 in Hialeah, Florida, Don Arnaldo’s timing for a new Flor de Gonzalez factory couldn’t have been better, arriving just in time for the start of the Cigar Boom 90’s.

After the Boom’s end in 1997, Arnaldo moved his factory to Nicaragua. Five years later, Arnaldo’s youngest daughter, Yadi Gonzalez-Vargas, joined her father, and today she manages their Miami offices including their manufacturing and distribution operations in Nicaragua. Being female, you could say Yadi was an industry trailblazer, and she played a role in the development of the original 90 Miles selection. Using a Mexican San Andrés maduro wrapper with an Ecuadorian Connecticut broadleaf wrapper for the binder, the 1980 edition offers an even more complex smoke. Its perfect balance, creamy-smooth flavor, and sweet-spicy character have made it a memorable, full-bodied “go-to,” taking the Flor de Gonzalez name to even higher brand awareness.

[Ed. Note: 90 Miles is no longer in stock at Famous Smoke Shop; click the image to view other Flor de Gonzalez cigar options.]

Established in 1968, Joya de Nicaragua was the very first premium cigar made in Nicaragua. Located in Estelí, today the company is run under the direction of its owner, Dr. Alejandro Martínez Cuenca, a native of Nicaragua, who purchased the company in 1994 shortly after the Sandinista Revolution. At that time, the brand had deteriorated considerably – a result of having been operated entirely by the factory’s workers, but the brand held-on during the Cigar Boom 90’s. When Dr. Cuenca decided to rehire many of the old blenders and rollers, in 2002 the brand made history by releasing Joya’s “signature cigar,” the Joya de Nicaragua Antaño 1970. Using the original 1970 Joya blend rolled in dark, oily Criollo wrappers, these potent, spicy and balanced cigars with earthy undertones have become the virtual archetype for Nicaraguan cigars – and puros, especially.

Liga Privada cigars – specifically, the No.9 – have become some of the most influential cigars of their generation for their superlative quality, flavor, consistency, and ceaseless critical acclaim. Interestingly enough, Drew Estate’s torcedores were smoking so many Liga Privadas they were asked to slow down because they were cutting into the company’s inventory; so, they came up with their own signature “liga.” Using many of the same rare tobaccos of different vintages and primings, and capping them with a Mexican Otapan Negro Último Corte wrapper, the blend they created became a star all its own. As a result, Drew Estate decided that it deserved to be “smoked by all,” and became the lead horse for what would later be known as the Liga “Undercrown” line.

If there’s one thing you can say about Perdomo Cigars, they’re no stranger to innovation. Following in the footsteps of his grandfather Silvio, and his father, Nicholas Sr. – both cigar-makers in Cuba – in August of 1992 Nick Perdomo Jr. pursued his dream and founded Nick’s Cigar Company as a home business from his Miami, Florida garage. Fortunately, he sold enough sticks to open a factory in Ybor City. Back then, the U.S. cigar market consisted mostly of mild cigars with Connecticut Shade wrappers. Wanting to break away from the mold, Nick began making fuller-bodied cigars with fillers from Nicaragua and with Ecuadorian-grown wrappers. Some of his colleagues told him he was headed in the wrong direction, but since Nick’s nature has always been to go against the grain, he forged ahead and built a huge following of full-flavored consumers. A perfect example is the Perdomo Cuban Parejo line. Debuting in 2001, they featured a hearty Nicaraguan core with a Connecticut Shade wrapper. But Nick went one step further, rolling them in wide ring sizes of 50 and higher – an industry first. I chose the Rothschild maduro; one, for its all-Nicaraguan-leaf blend, and two, because there’s something especially flavorful about Perdomo’s maduro leaf.

Will these breakout Nicaraguan cigars influence what cigars you smoke going forward? Perhaps, but I’ve yet to find a cigar smoker who wasn’t curious enough to try something new. And if you’re already a fan of these cigars, maybe the next time you light one up, you’ll have a different sort of appreciation for it.

Hi Gary, what a great article. Thank you. These are the articles that make me sound really smart when I’m sitting around the poker table with my buddies and I throw out one of those. ” did you know” bombs. Again thanks. Matt from Louisville

Thanks Gary for the very interesting and informational article. I’ve smoked them all except the Flor De Gonzalez. I wish they had them more in Northern California.

Great read gary, very interesting, I have smokes 3 of these!!

Thanks for the article Gary. Great read!

What about Padron? Seriously?

….yeah, there are “a couple” others that should have made the list if you’re listing “influential” Nicaraguan cigars. Doh….

How can you leave out Davidoff Nicaragua

Reading Time: 2 minutes Fan Mail returns: so many questions have come in since our last presentation it was hard to choose, but some of topics we’re talking about today include tips for cutting extra-wide ring gauge cigars, a trick to unplug a torch lighter, plus questions about Maduro and cigar flavor profiles…watch our videos now!