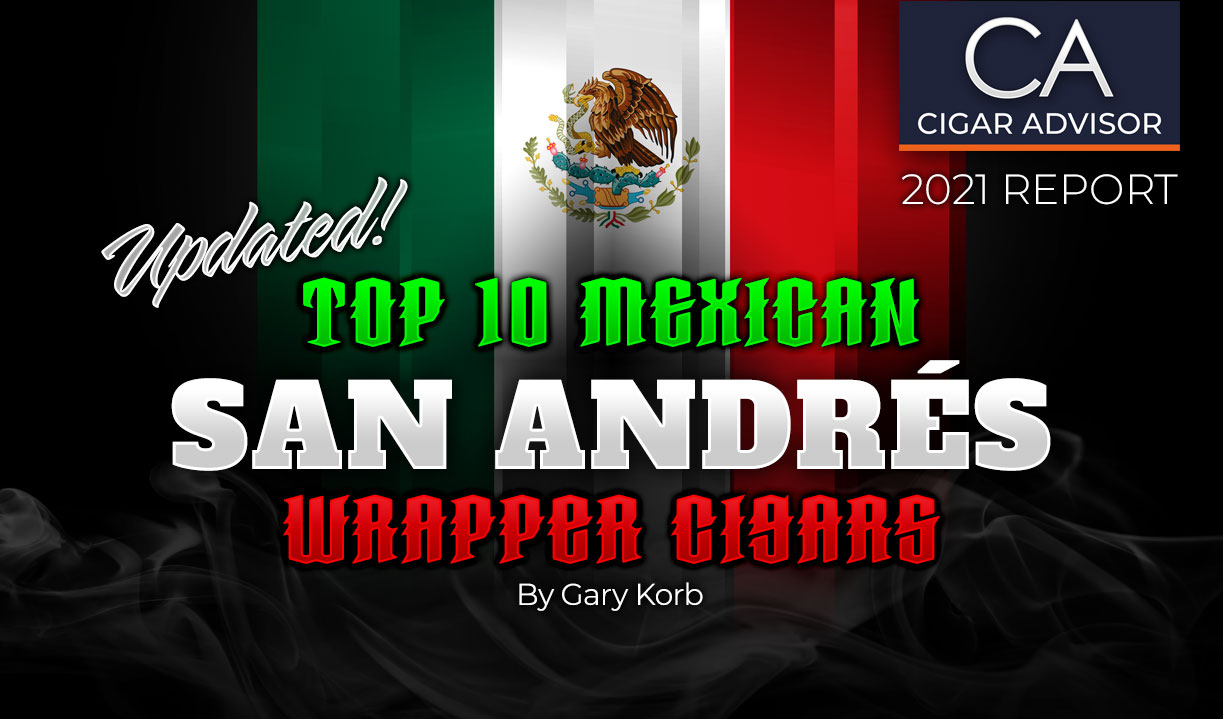 When I got into the cigar business in 2001, I was suddenly imbedded with hundreds of desirable cigar brands mostly from the Dominican Republic, Nicaragua, Honduras. There were also a number of top Mexican cigars, but from a consumer perspective, and for whatever reason, they weren’t exactly the most desirable cigars. As the years passed, I began to notice that a lot of premium cigars were being rolled in Mexican San Andrés maduro wrappers. I took to this wrapper immediately for its natural sweet-spicy flavor and began seeking out even more cigars with these dark, oily Mexican wrappers. Not all of them hit the mark, but those that did I continued to return to.

Today it’s my favorite wrapper. And I guess I’m not alone, because more and more I’m finding that blends from everyday value cigars to the most distinguished luxury cigars are using Mexican San Andrés maduro wrappers. So, in an effort to share my personal affection for this savory tobacco, I’ve listed what I believe are ten of the best. But first, here’s a brief back story on the origin and wonderful flavor properties of Mexican San Andrés wrapper.

Say hello to the A. Turrent family, the cigar industry’s oldest and most revered family of Mexican tobacco growers and cigar makers. The Turrent’s farms supply just about everyone in the cigar business with Mexican San Andrés-grown wrapper leaf, most of it being Mexican San Andrés Morrón wrapper, which is also referred to as San Andrés Negro and San Andrés Maduro.

It all started in 1880, when Alberto Turrent I, emigrated from Cuba to Mexico’s San Andrés Valley with a pocket-full of Cuban tobacco seeds. Today, under the direction of Alejandro Turrent, the tobaccos grown on his family’s 2,000 acres are among the most prized by blenders all over Central America, and you’ll find them in such brands as Rocky Patel, Drew Estate, and Montecristo cigars to name just a few.

Mexico’s San Andrés Valley in Veracruz (where most of the leaf is grown) is dense with fertile volcanic soil which produces the distinctive taste of San Andrés maduro tobacco. Additionally, the prevailing winds from the Gulf of Mexico, combined with the humid climate are what contribute to the concentration of naturally sweet n’ spicy flavors found in the leaf.

According to Tobacconist University, “The most famous of Mexican cigar tobaccos is San Andres Negro. Like Connecticut Broadleaf, San Andres Negro is stalk-cut and lends itself to binder and maduro wrapper production. This varietal is a tough leaf that can withstand the extra fermentation required to produce a maduro.”

How The Cuban Embargo Made Te-Amo Cigars a Hit

As a result of the Cuban Embargo, during the 1960’s Mexican cigars like Te-Amo cigars were all the rage among American cigar smokers who, truth be told, had mixed feelings about them. Due to the heavy import duties Mexico placed on imported tobaccos, all Mexican cigars were puros until 1996 when Mexico finally repealed the tax.

By then it may have been too late, since countries like the Dominican Republic, Honduras, and Nicaragua were already exporting their cigars into the U.S. market, and cigar smokers left their Mexican cigars in favor of the quality and taste of the native-grown tobaccos used in the three aforementioned countries. Many believe this is what has contributed to Mexican brands having a negative image. But in a 2014 StogiePress.com article, “Viva Mexico – The San Andrés Wrapper,” the author writes: “That has changed as consumers’ palettes are now appreciating a bolder, spicier taste. This spicy, chocolate flavored leaf has found its way back into the cigar market with a vengeance. Consumers love it and manufactures are embracing it.”

Generally speaking, the leaf adds elements of earthiness, light spicy notes, and a slightly sweeter character to the blend, which is naturally found in maduro tobaccos. Fortunately these qualities pair well with most filler tobaccos – especially Nicaraguan – which is why so many master blenders today prefer it for adding sweetness, smoothness, complexity, and balance to their cigars.

In 2018, the CAO Zócalo debuted in one frontmark, a Gigante. But in 2021 it returned with more traditional sizes by popular demand. As great San Andrés Morron wrapper goes, Zócalo boasts one of the thickest and the sweetest. If you’ve got a fair amount of experience under your belt, this hefty toro has a nice pay-off. Medium to full in body, it’s well-balanced and simmers with notes of brown sugar, roasted nuts, sweet earth, and a shot of chipotle. Great with a good sipping Tequila, too, Zocalo makes a refined, end-of-the-day or after dinner compadre.

Just looking at this cigar can make your mouth water, even if you’re not an avid cigar smoker. This top-tier Aganorsa Robusto Extra has a 305 address and steps out in style. It’s got a nice box pressing, too; more round than square corners, and flattened just a squeak more than your average BP. Aside from its aesthetic qualities, this cigar demonstrates how well prime San Andrés wrapper melds with a variety of Nicaraguan fillers—and Aganorsa’s are some of the best. Dense, velvety smoke ensues marked by a prime layer of sweet spice that yields woodsy, leathery, coffee and chocolatey delights.

The list wouldn’t be complete without a cigar from the A. Turrent family. Named for the birth year of patriarch Alberto Turrent, the Casa Turrent Serie 1942 is a Mexican Criollo forward blend that’s naturally sweet and “spicy without being aggressive.” The tobaccos are all high priming leaves aged a minimum of four years. Woody notes, caramel, graham cracker, nuts, and coffee all combine for a spicy, full-flavored and impressively complex smoke. If you’re looking for the real San Andrés deal, the Doble Robusto is perfect for showing-off Turrent’s famous wrappers, while also dishing out the rich flavor of their San Andrés Criollo.

Here’s a cigar that’s a gem in more ways than one. Named for a fabled, jet-black gemstone that Hondurans carry for good luck, the C.L.E. Azabache Robusto boasts one of the darkest, sweetest San Andrés maduro wrappers out there. Box-pressed to a virtual wafer-like shape, it’s loaded with notes of earth, cedar, leather, coffee, citrus, cocoa, and more. Yes, this delectable little number is all over the flavor wheel. It’s also creamy, complex, balanced, and faithfully consistent. In another great example of how well San Andrés maduro blends with other tobaccos, the CLE Azabache Robusto is a charmer from end-to-end.

It’s no surprise that La Historia, an affectionate nod to Ernesto Perez-Carrillo’s family, past and present, landed the #2 slot in the “The 25 Best Cigars of 2014.” Even now, it continues to be one of the top selling cigars in the EPC catalog. Vintage Nicaraguan and Dominican tobaccos, plus an Ecuadorian Sumatra binder pressed in a pristine San Andrés wrapper, combine for a complex, well-balanced, and full-bodied smoke. Frontloaded pepper at the start rounds out to a velvety, earthy-sweet smoke with accents of chocolate mocha and dried fruit, the El Senador also responds well to the leading single malt scotches and rums.

“If you haven’t tried Crowned Heads yet, Juarez is a great way to introduce yourself to the brand,” says Crowned Heads Cigars co-founder, Jon Huber. And he’s spot on. Blended and rolled at Tabacalera Pichardo, the affordably-priced line is full-flavored, and really does appear to represent the company’s general flavor profile. Made to fill the gap in the sub-52 ring gauge sizes, the Juarez Chihuahua is a sweet n’ spicy stunner. Rolled in dusky San Andrés wrappers, the chewy, medium-bodied smoke reveals flavors of leather, caramel, and cedar, then bolder, earthier tones later on. Pair it with great rum or bourbon, and you’ve really got something.

“After more than nine months of working on the San Andrés, and countless blends, I think we nailed it!” says Kristoff Cigars founder, Glen Case. And since its release in 2015, this 92-rated line is still crushing it. Dedicated to quality and consistency at every level, the dark Mexican San Andrés wrapper on this Robusto caps an all-Habano seed core, and the triple fermentation process irons out the bitter wrinkles in every filler leaf. What you get is an uber-smooth, medium-full smoke teeming with spice, pepper, milk chocolate, and a coffee cream finish. Ideal after dinner with espresso or your favorite whiskey, this blend characterizes Kristoff’s finest hour.

According to Don Pepin, La Opulencia, which is Spanish for “The Opulent,” is all about “richness and abundance.” After resurrecting this former Cuban brand, they started with a pristine Mexican Rosado Oscuro, which gives the blend a creamy character. (When done right, Rosado Oscuro is phenomenal.) The binder and filler core are stuffed with their finest estate-grown Nicaraguan Corojo, Criollo, and Habano tobaccos. The result is a full-flavored, 91-rated cigar led by chocolaty notes, oak, nuts, coffee, and sweet spice. All I can add is that, it’s so great when a cigar really does live up to its name.

The Rocky Patel Vintage Series cigars are among the top cigars in the wide Rocky Patel Cigars stable, and this 90-plus-rated San Andrés is another gem. The wrapper is gorgeous, carrying with it 11 years of aging for a smooth sail. The Nicaraguan fillers provide an earthy, full-bodied, and complex smoke with additional flavors of cedar, coffee bean, and a whole lot’a spice. Or, as Rocky put it, the smoke “delivers robust flavor and power.” Compared to many of the other cigars listed here it’s quite unique, especially in the Churchill, which gives you plenty of time to discover every nuance of flavor along the journey.

The Tatuaje Mexican Experiment was Pete Johnson’s first try with a San Andrés wrapper and it was made in a very small amount. It was a surprising success for the brand. So, when he decided to revive it, Pete also created the ME II. Using the same tobaccos, Pete tweaked the ME II to a profile that’s “not overpowering, but has a lot of flavor.” The Robusto is exquisitely creamy with notes of earth, leather, cocoa, cedar, and coffee on a long finish. It’s not as sweet as some other San Andrés maduros, but it is complex. Pair it with a fine dark añejo Tequila and you’ve really got something to talk about.

The time-tested Padron thousand series maduro is still a killer blend. Uses this exact leaf, but won’t admit it!

I am mostly a Cuban cigar smoker. However, I really enjoy cigars with the San Andres wrapper too. My favorites include the Casa Turrent Serie 1901, Psyko Seven Maduro, and San Lotano Maduro.

I think you’re referring to La Aroma de Cuba Mi Amor. And they are excellent cigars.

La Aroma de Cuba is only the name here in the US, internationally they call it La Aroma del Caribe

Like the Rocky 2006 (really the only Rocky that has been consistent for me) and ME II which I’ve just bought my 3rd box, your welcome. Great article, thanks.

Reading Time: < 1 minute #nowsmoking the Southern Draw 300 Manos Habano, “the poster child for ultra-creamy cigars with a woody, full-flavored profile.” Click now to get our tasting notes, and everything else you need to know about this cigar in under 60 seconds…