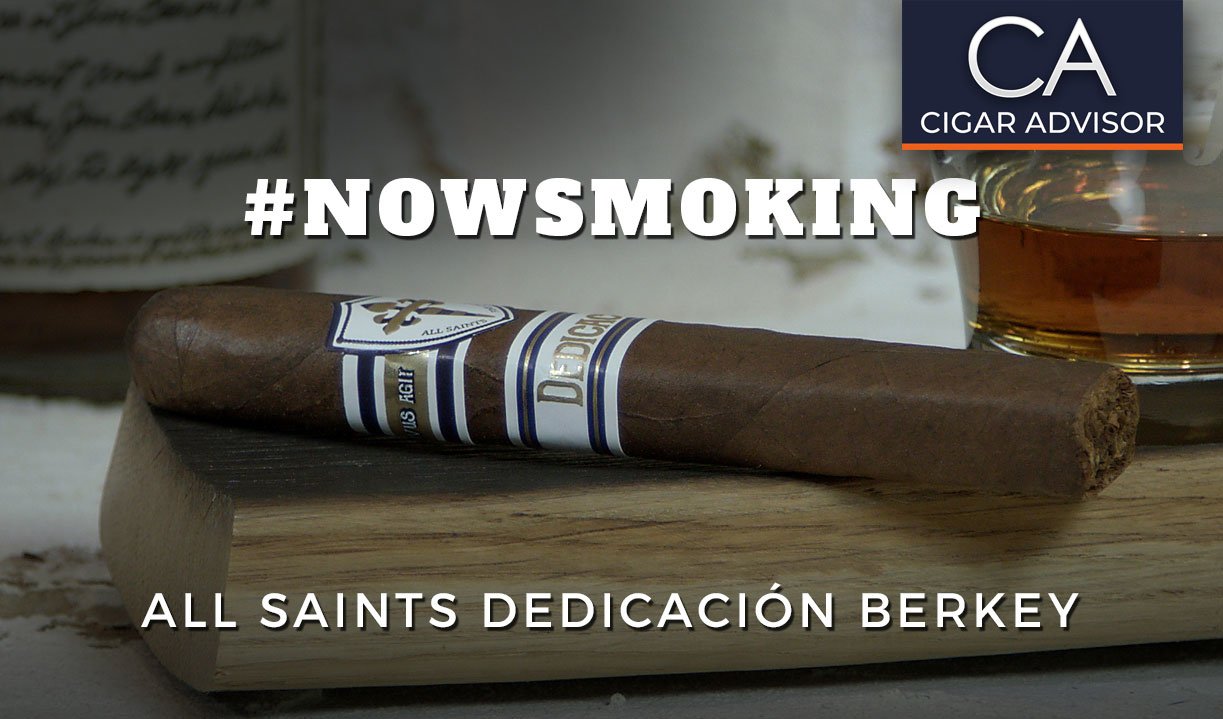 Presented in Boxes of 20 cigars.

The All Saints Dedicación Cigars Back Story

The story of All Saints Cigars could be called a tale of resurrection. Established in 2019, one of the company’s three partners is Micky Pegg, a cigar industry veteran who may be familiar to older cigar smokers. You see, prior to 2007 Micky was the national sales manager and vice president of sales at C.A.O. cigars, and before that, he was the Mid-Atlantic sales manager for Davidoff. The other two partners are restaurateur, Martin Corboy, and Air Force veteran, Frank Layo. 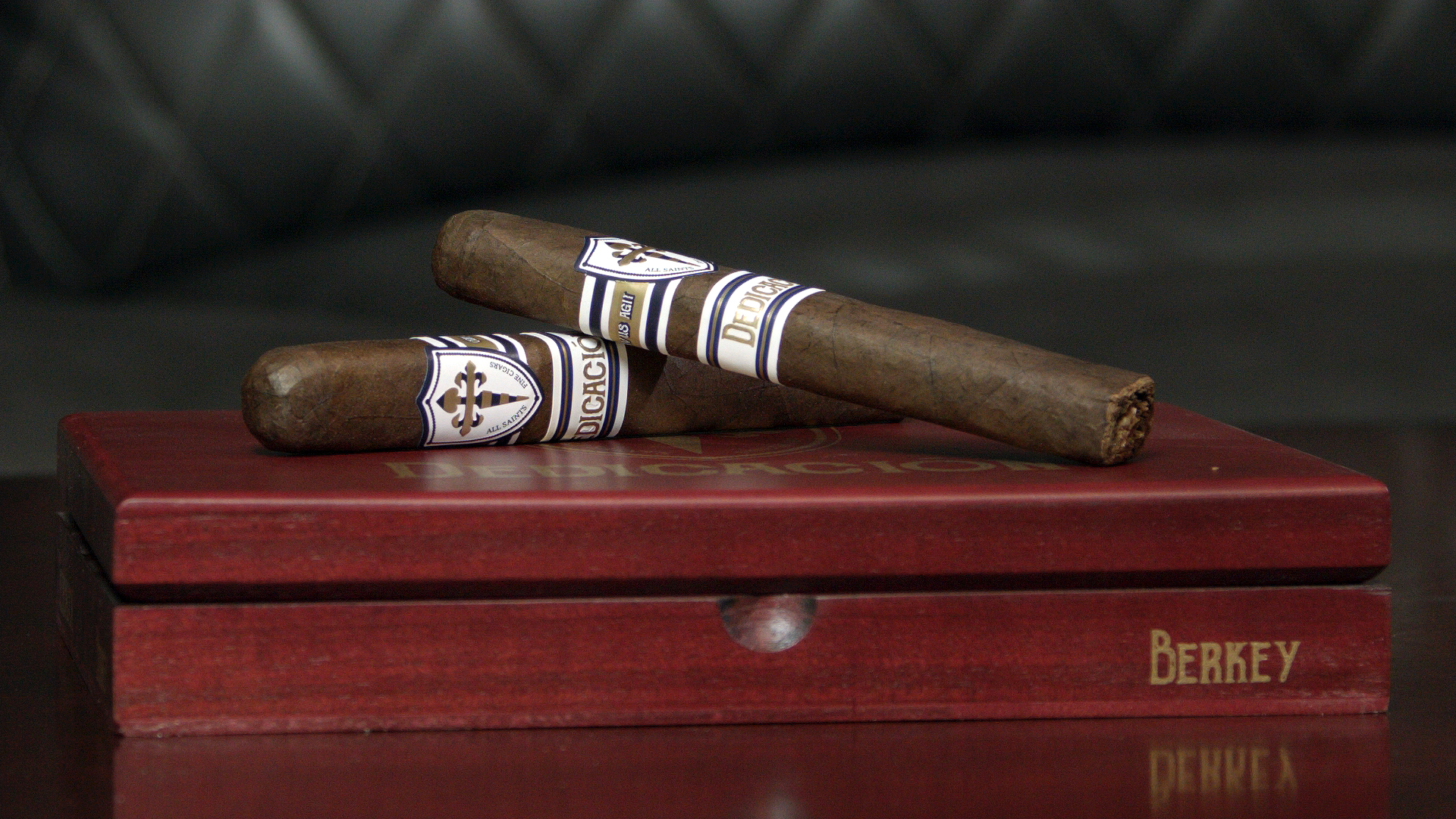 2007 was the year CAO was acquired by Scandinavian Tobacco Group, and Micky left the business to carve a new path. He got his Masters in Organizational Leadership from the University of Pennsylvania, and from there went into the banking industry selling mutual funds. But once bitten by the cigar industry bug, it’s hard to get it out of your system. 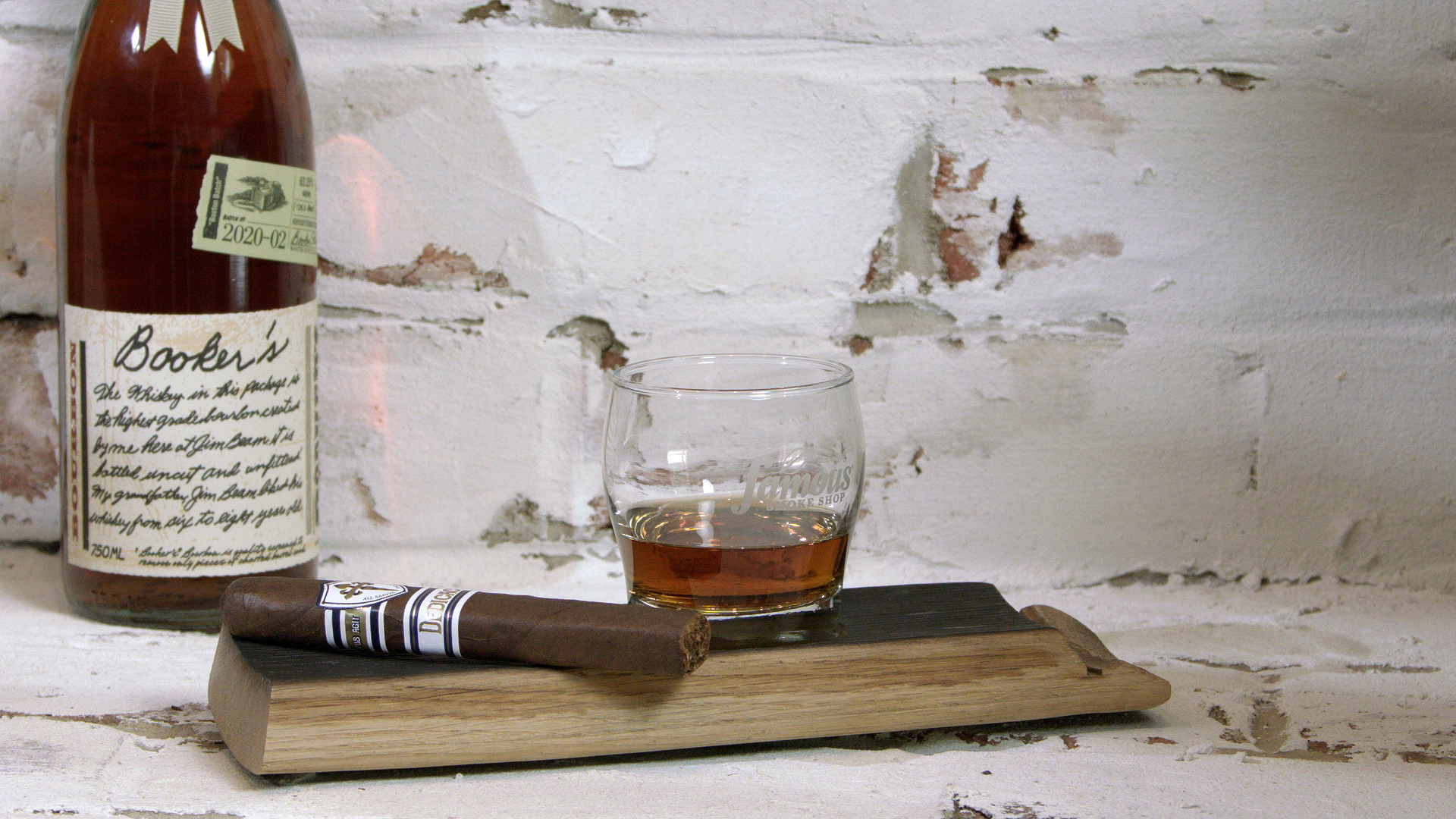 “About two-and-a-half years ago we [Martin and Frank] were sitting down talking and smoking cigars,” said Micky in a recent Tobacco Business interview. “And finally we decided that we would do this together. It was time. I decided if I’m going to work hard it should be for something I love. Besides, a tough day with a cigar is better than a great day doing anything else.”

So, in 2017 the three men joined forces and found another ally in Rocky Patel. Rocky and Micky go way back, and in an effort to help his old compadre, Rocky offered using his Tabacalera Villa Cuba S.A. (Tavicusa) factory for production of All Saints cigars. Working with ace blender, Amilcar Perez-Castro, the first release was Solamente, a limited edition made in only one frontmark, a 5”x58 double robusto. 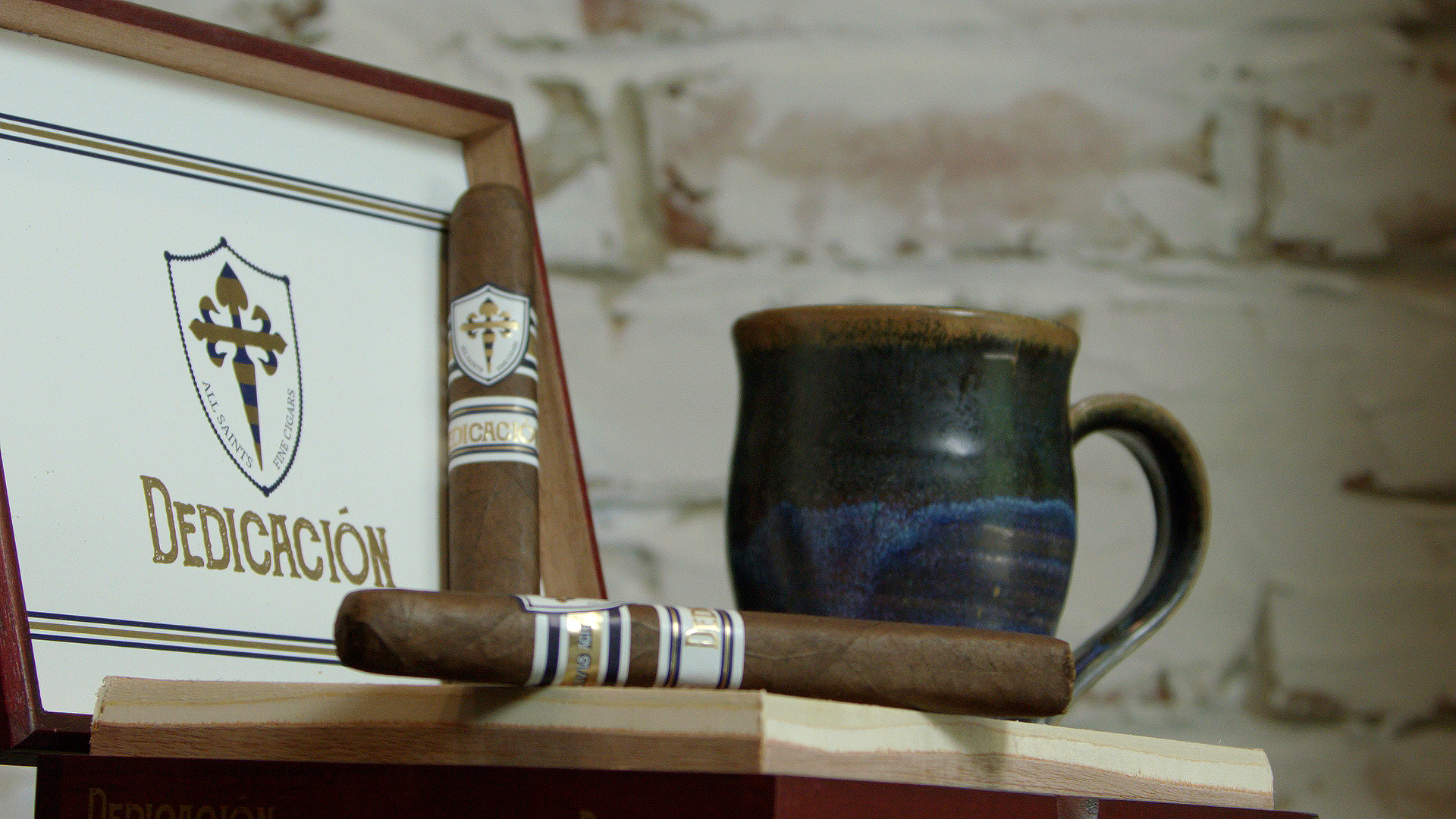 Micky says it’s also for “those working in the fincas” and their families, including “the families in the States that support those guys that are on the road four or five days a week.” 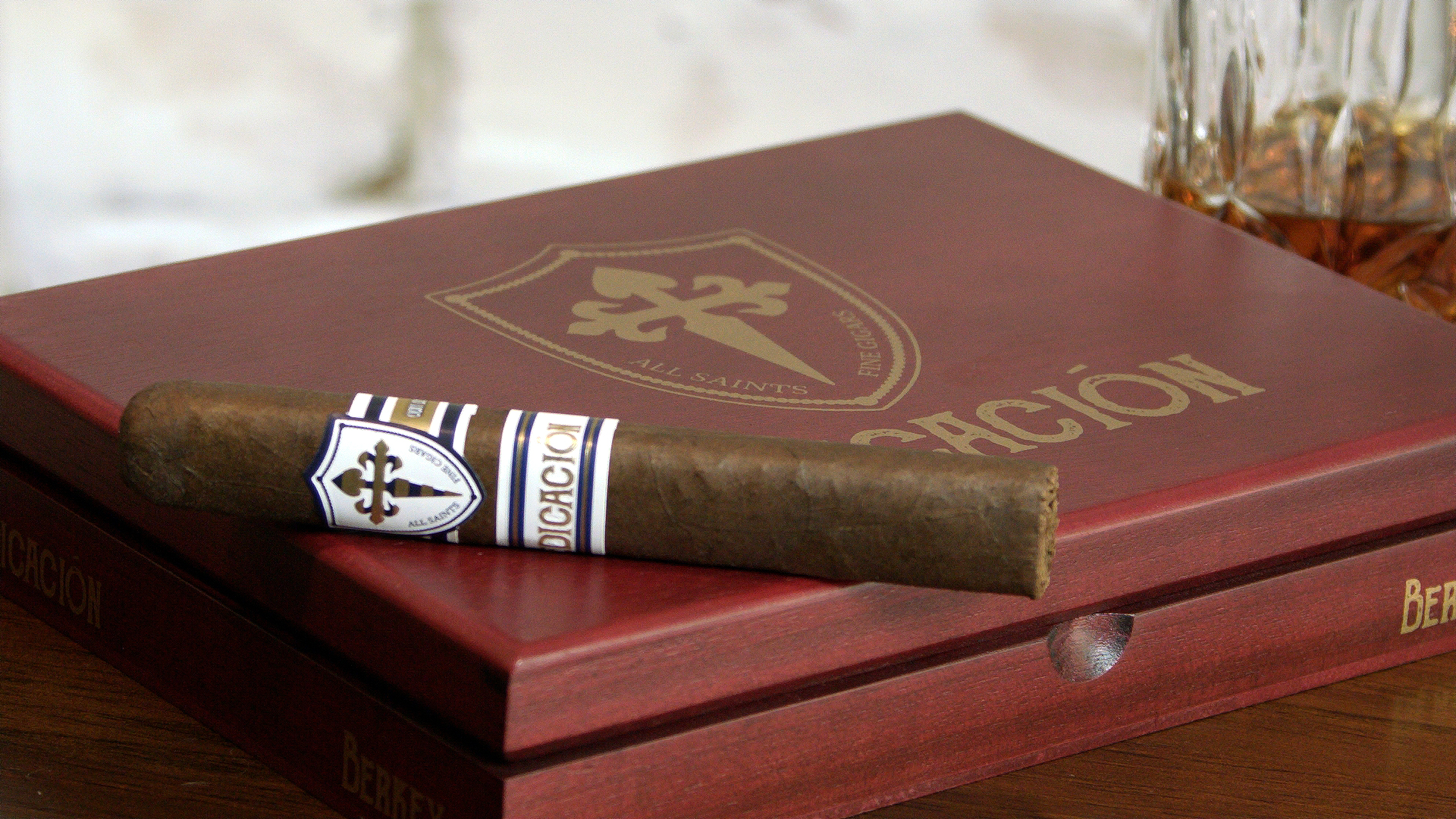 “It’s also for my mentors along the way,” adds Micky, “like David Berkebile, Walter Gorski, George Brightman and, of course, Cano Ozgener. And for others who inspired me to follow my dream like my wife, Kimmy, along with Mike Conder, Jon Huber, and Pedro Wagner. All the people that have encouraged me and helped to get me to where I am now. It all feels to me very saintly.”

Construction: This Robusto has a luxury-class appearance. The San Andrés wrapper is impressively silky with a shiny, leathery patina and no protruding or excessive veins. The cigar is skillfully rolled and box pressed to a sharp rectangular shape, and completed by a triple seam cap. The band design also adds a touch of class to the cigar’s appearance.
Cold Draw: Nutty (like cashews) and slightly leathery.
Toasting and light: No problem.
Base flavors: Peppery spice, charred cedar, leather, roasted nuts, sweet tobacco.
Aroma: Campfire.
Retrohale: Nutty and spicy.
Burn & Ash: Spot on. No issues burn-wise, and a firm grey ash. 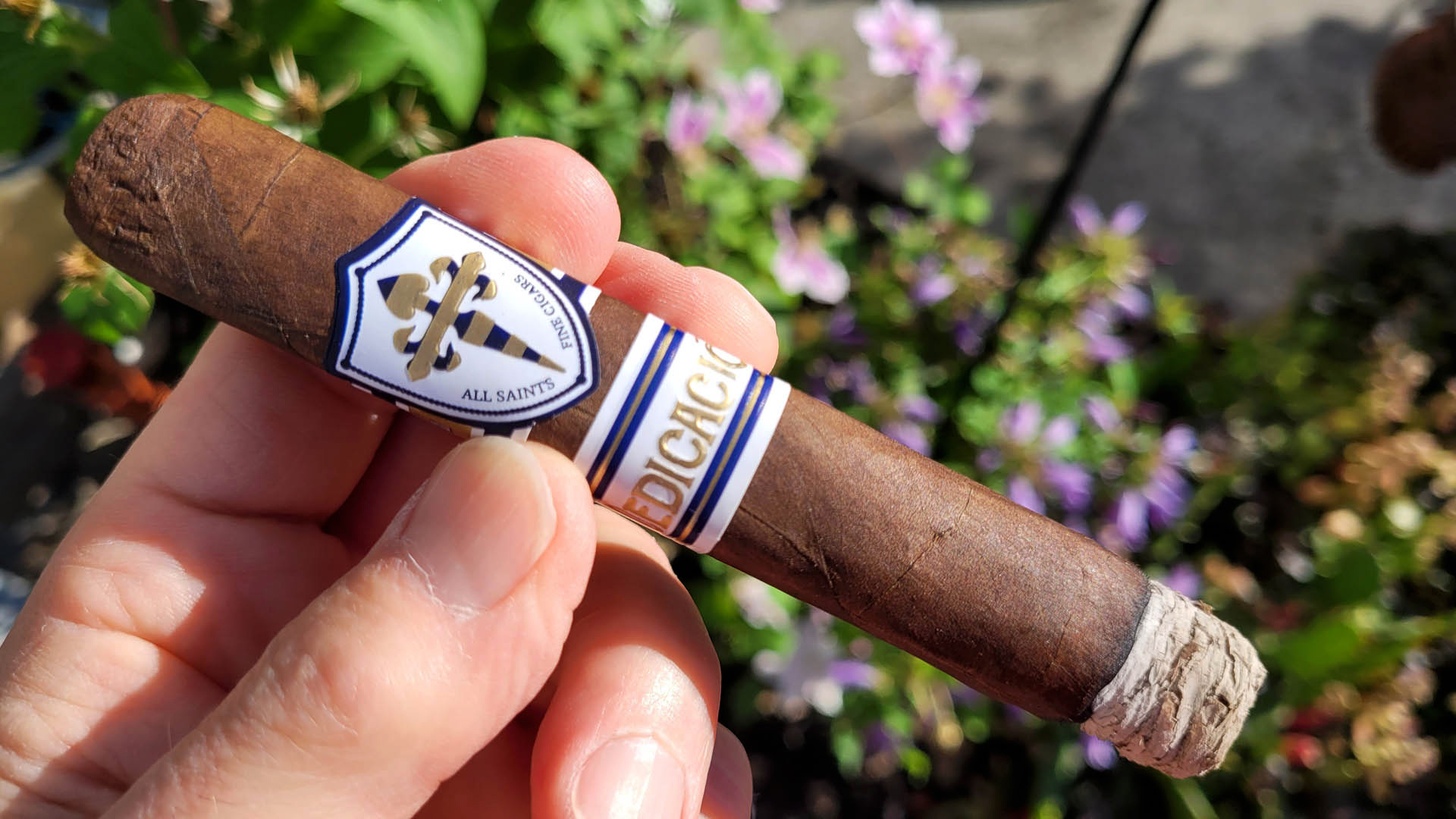 The first few puffs were very spicy with a red pepper accent, while the smoke was very thick and creamy. As the spice began to settle I also picked up a leathery note. The spice rolled off slowly causing some cedar and roasted nut flavors to emerge. The cigar also began forming a very long and impressively firm ash that was almost entirely grey in color. Retrohales were devoid of any specific notes at this stage. Plus, the aroma was a bit sharp and not well-defined enough to make a call. 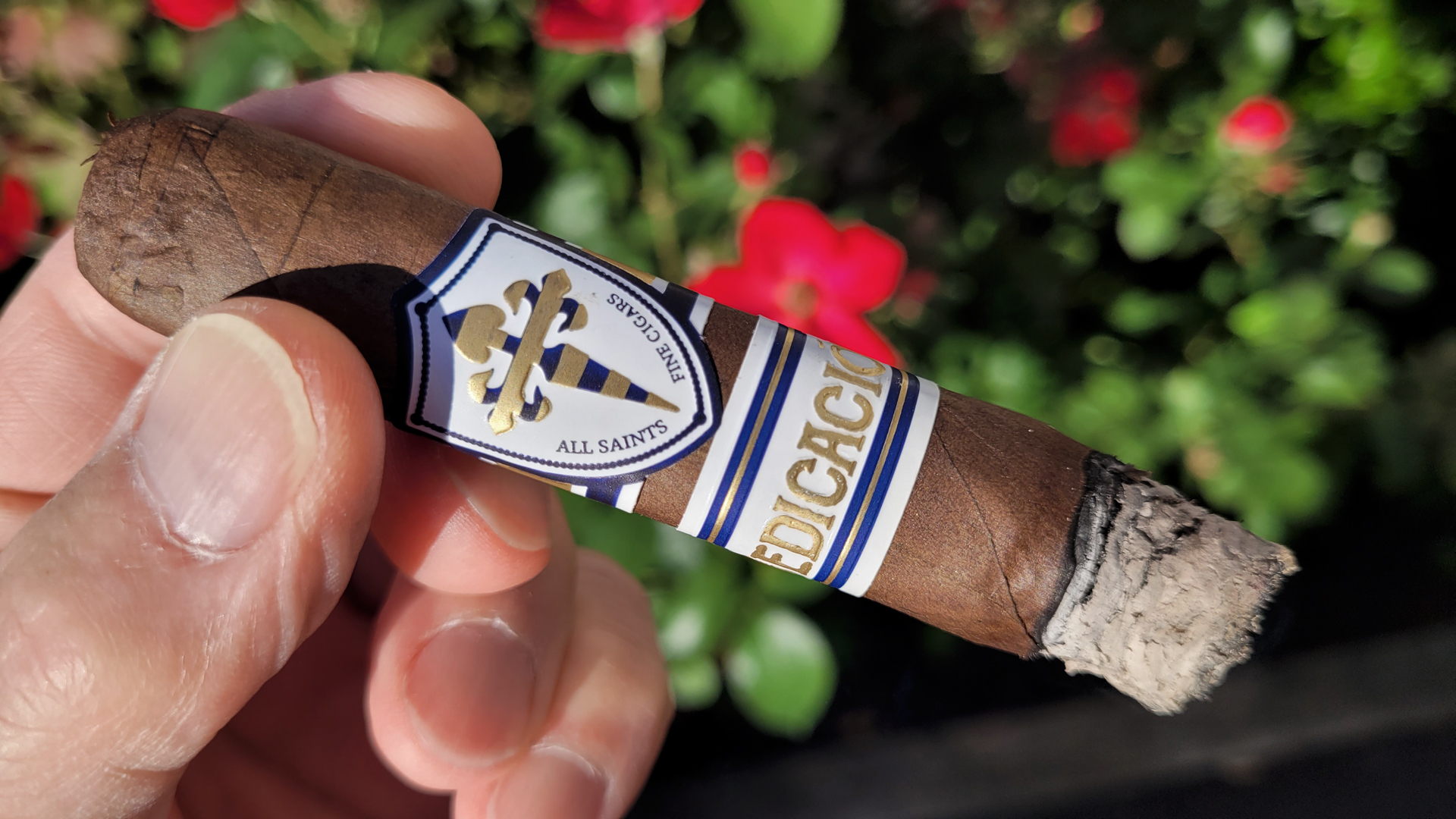 This is where the first big change up occurs. As the body settled into the medium-plus zone, sweet tobacco rose to the surface followed by a cedary-leathery note. I could also tell that the cigar was gaining in body and strength. The burn continued to be excellent forming ashes that could easily have reached an inch or more (if I had been more careful). The aroma began to develop into what I perceived as a campfire wood fragrance. 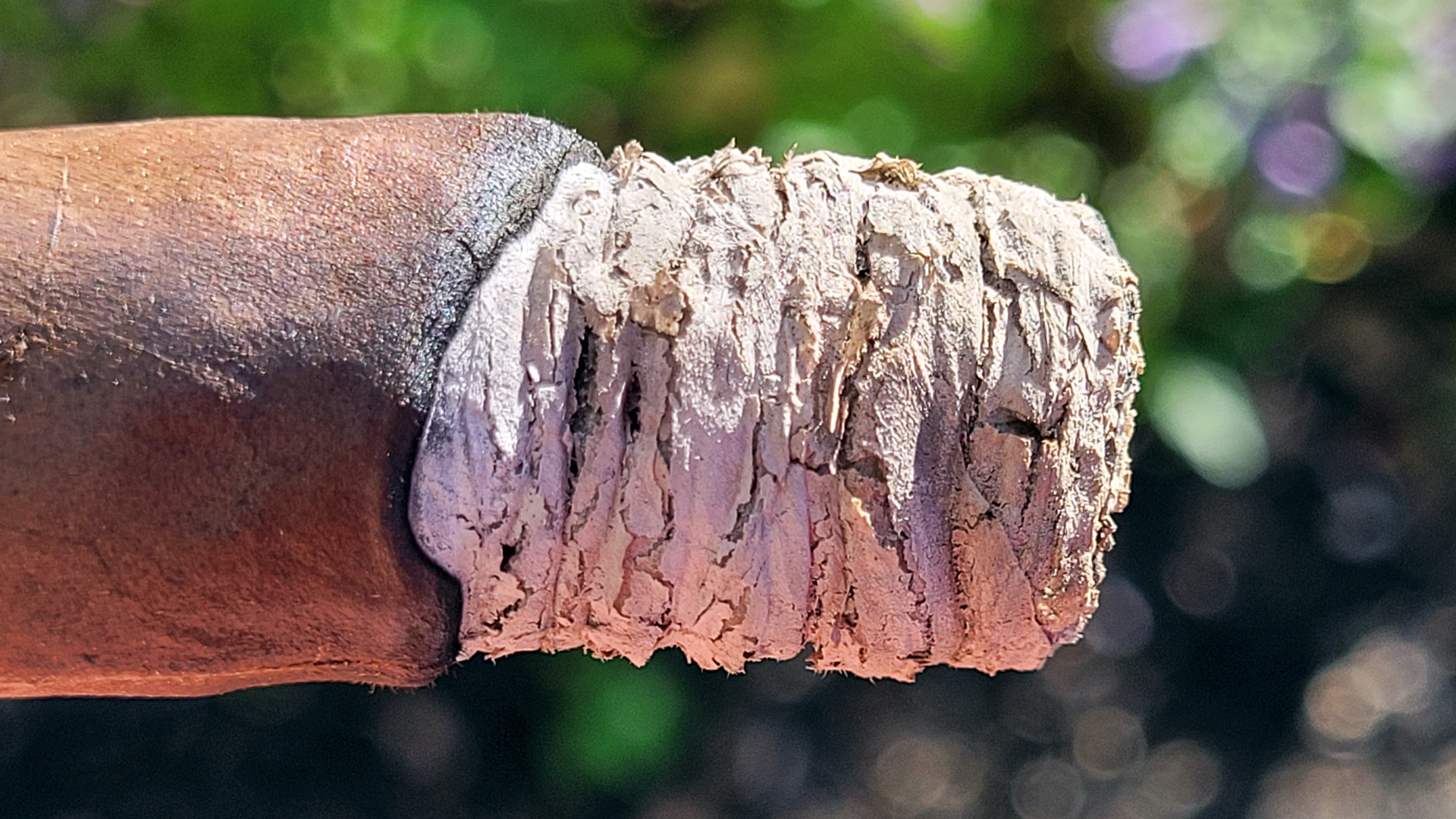 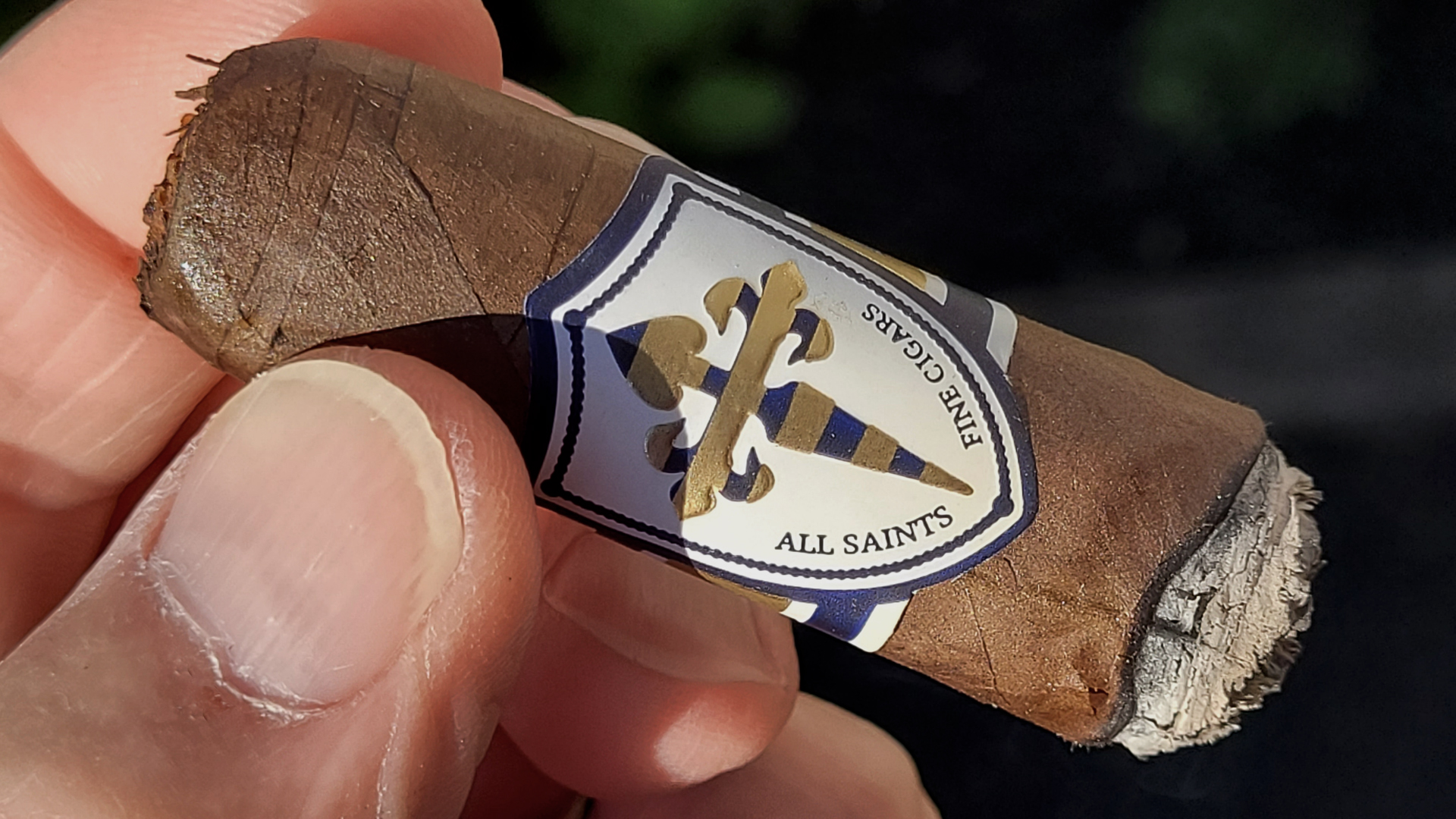 As it turns out, the Berkey was more complex than I suspected. I suddenly found myself surrounded on all sides as flavors kept bumping into me. However, it was also at this point where the smoke volume increased even further placing the body squarely in the red zone. The final inches transitioned to a mostly earthy-woody mix, and I had no problem nubbing it. 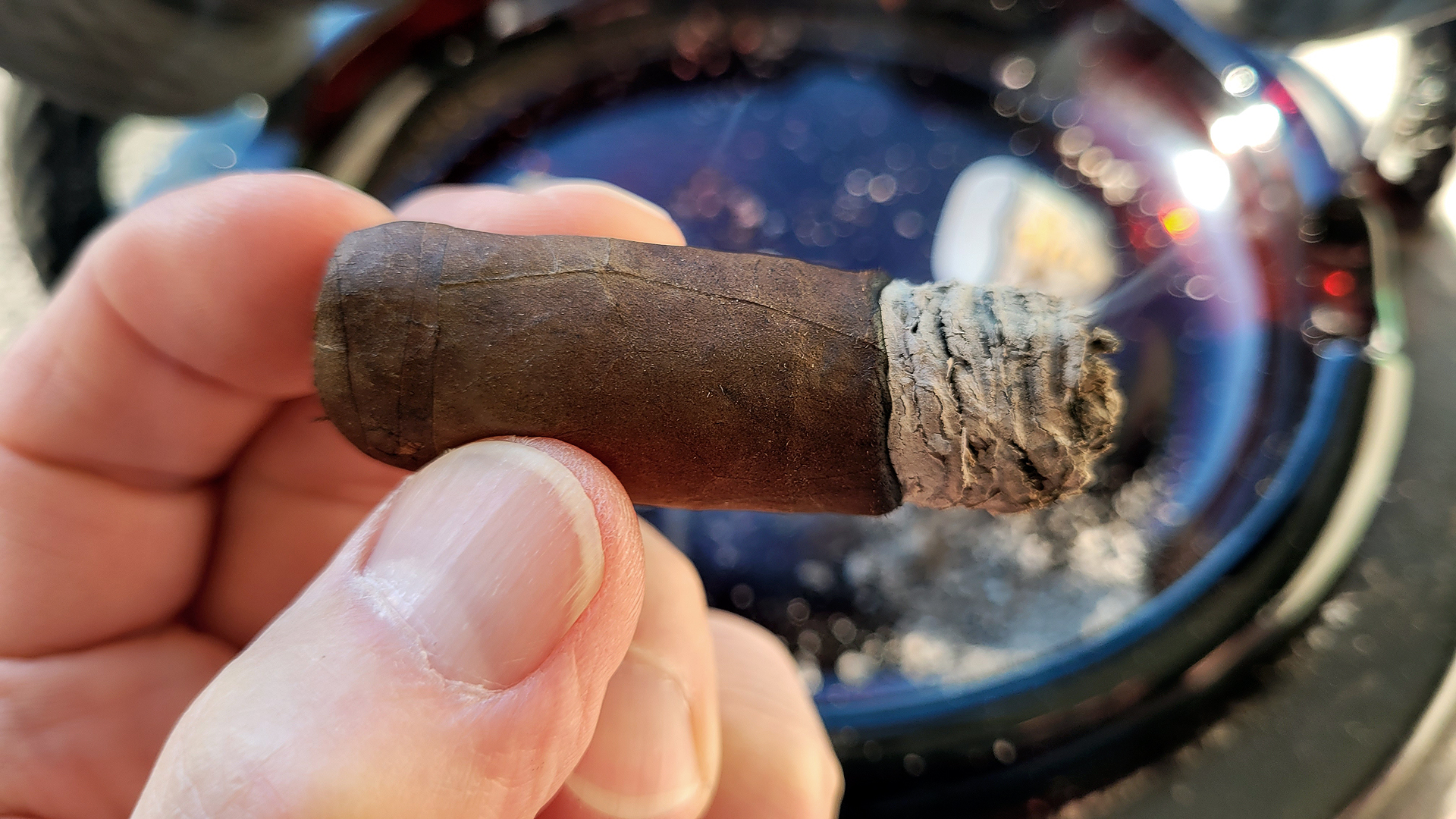 What whiskey pairs well with the All Saints Dedicación Berkey? 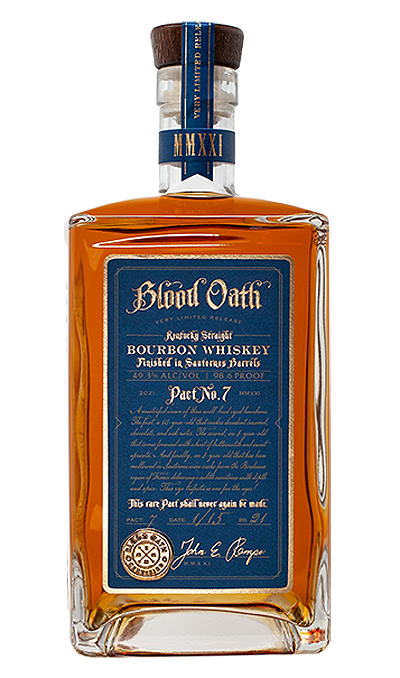 Aroma: Caramel and strong oak, backed up with hints of honey.
Palate: Caramel and oak.
Finish: Apricots, honey, and peaches.

As an alternative, you can also try Booker’s Boston Batch Bourbon seen in the video. 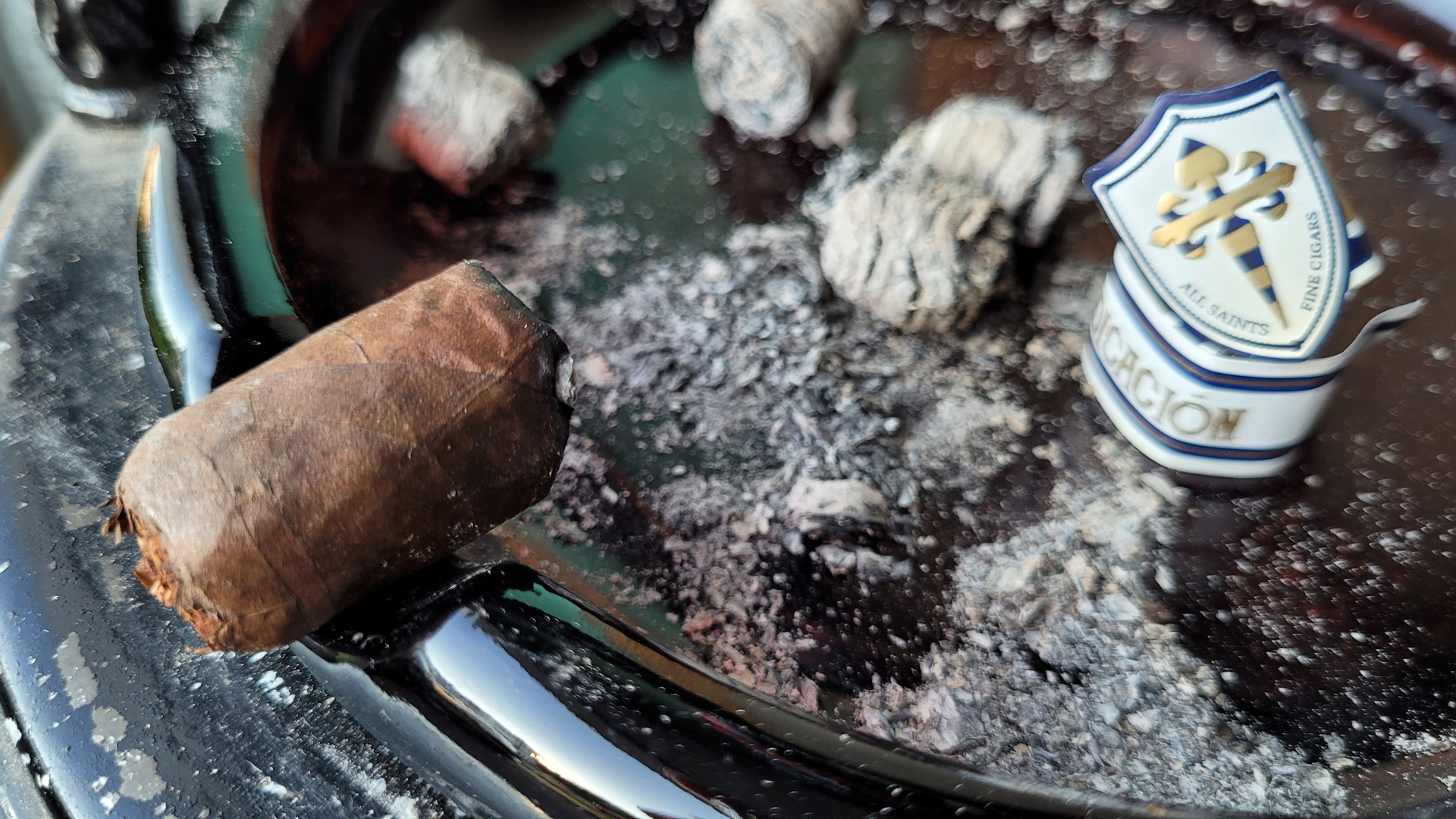 No doubt, the All Saints Dedicación Berkey is a very refined cigar made with top grade tobaccos. It’s certainly up there with the best of the other indie/artisan labels, but I don’t feel it’s a cigar for newly initiated. It’s not cheap either. Plus, I feel that a more experienced palate, as they say, will not only be able to better handle the cigar’s strength but can also appreciate what went into this blend.

And although comparisons may be fair, get any ideas out of your head that this is another Rocky Patel cigar. Although I’m sure Amilcar and Rocky were influential in the blending process, the All Saints Dedicacion has a character all its own. It’s opulent, complex, and carries with it all of the things that make it a unique boutique selection. Suffice it to say, All Saints is off to a very good start.