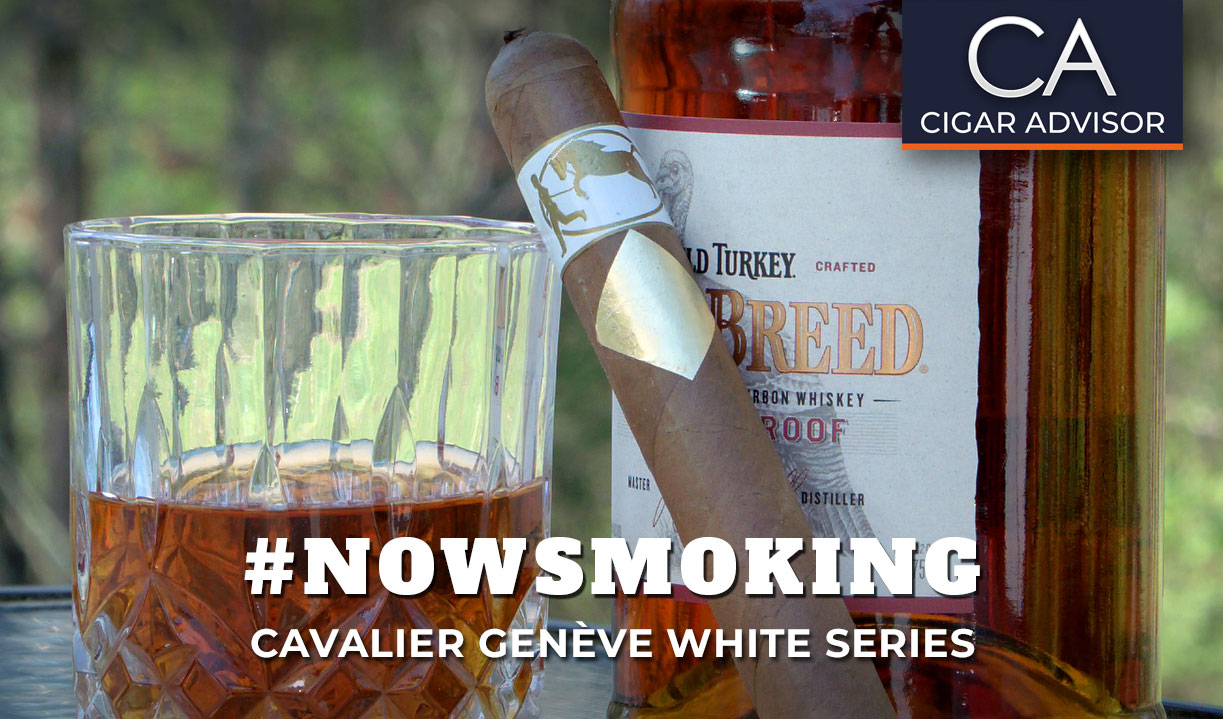 The flagship of their cigar portfolio, Cavalier Geneve White Series, is founder, Sebastien Decoppet’s first foray into blending a mellow blend. And you can’t miss it in a shop. Or any of Cavalier’s cigars, for that matter. Each is adorned with a 24-karat gold leaf diamond fused into the wrapper. 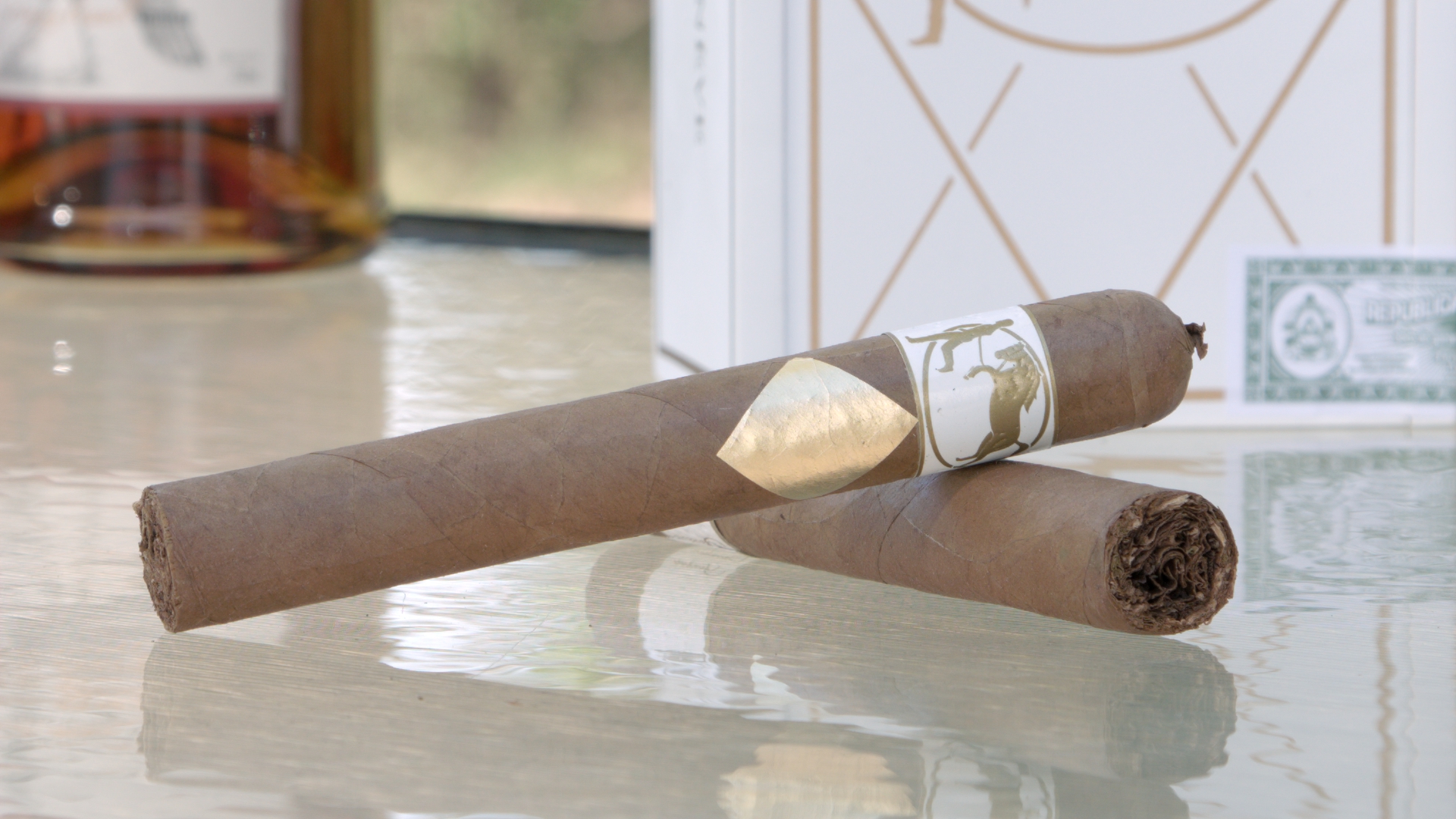 Decoppet is a Swiss native who found himself in Honduras in his early 20s. He was there to learn the process of handmaking premium cigars with help from the Plasencia family, and later, Adin Perez of the San Judas Tadeo factory.

Together with Perez, Decoppet developed the Cavalier brand. His goal for White Series was a “mild to medium but very complex cigar.”

I’m eager to light it up and see if it smokes as good as it looks. 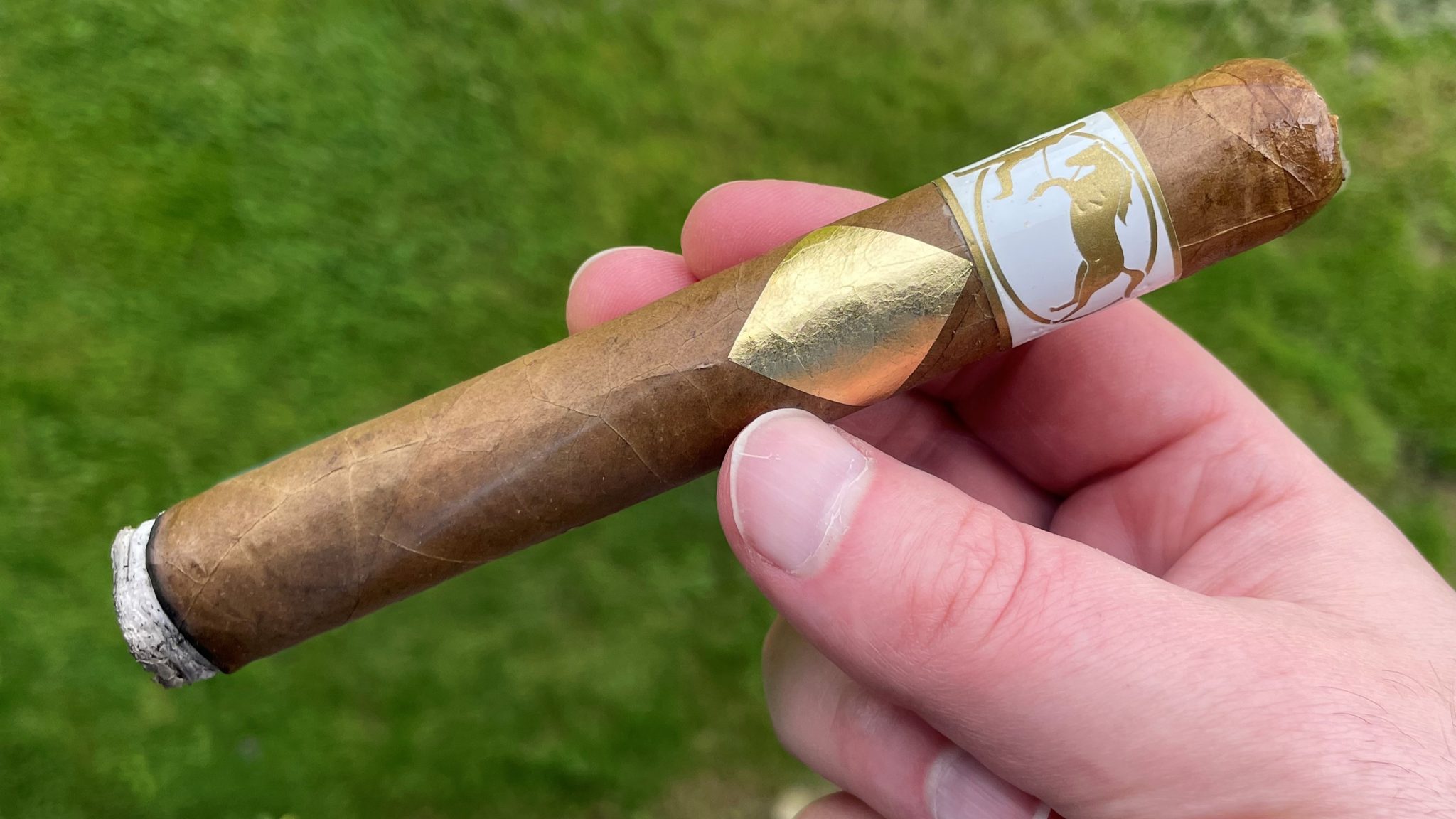 White Series leads off with a refreshing combo of cedar and spice. Nothing too heady, but certainly not boring. I’m finding some pepper on the finish—especially through the retrohale—but it’s only skirting medium-bodied. This is an easy-smoking cigar for sure. As far as complexity in this first third, there isn’t much to speak of. There’s an overall earthiness to it, but cedar is the only real standout flavor so far. 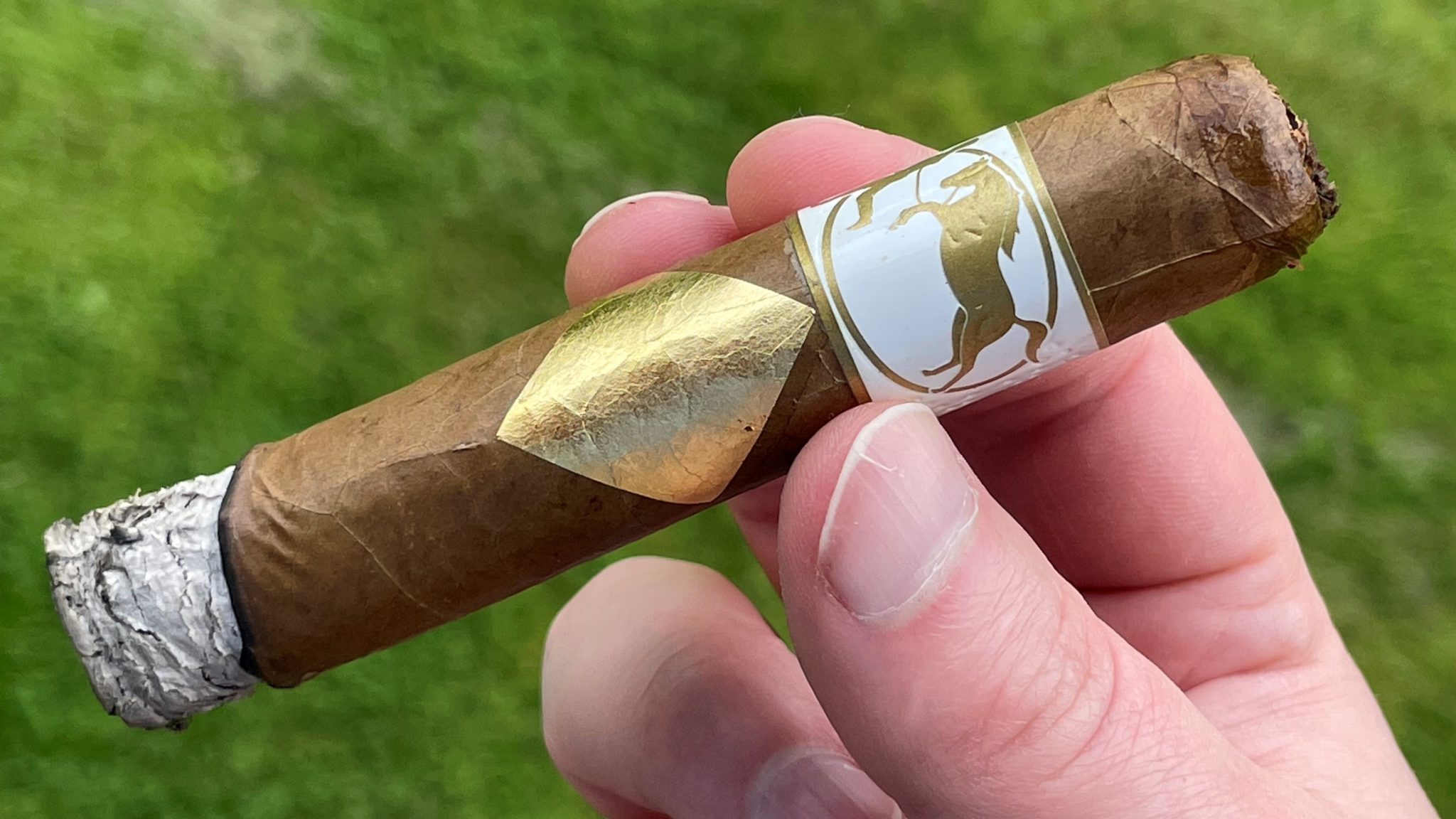 As I round second base, the cigar has developed a sweetness to it. It kind of reminds me of vanilla bean and complements the cedar, spice, and earth nicely. Though there are some pop-up notes of raisin occasionally, Cavalier White Series doesn’t seem to color outside the box with complexity the way Decoppet had suggested. Let’s see if that changes in the final third.

I’m caught off guard by how mellow this cigar is for a Habano. These wrappers tend to be spicier. And while there have been spices and peppers throughout my session, they’re tame. As far as flavor, not much has changed from the previous two thirds. Still cedar. Still earth. And still a sweet blanket of vanilla beneath. It didn’t change much, but then again…it really didn’t need to. 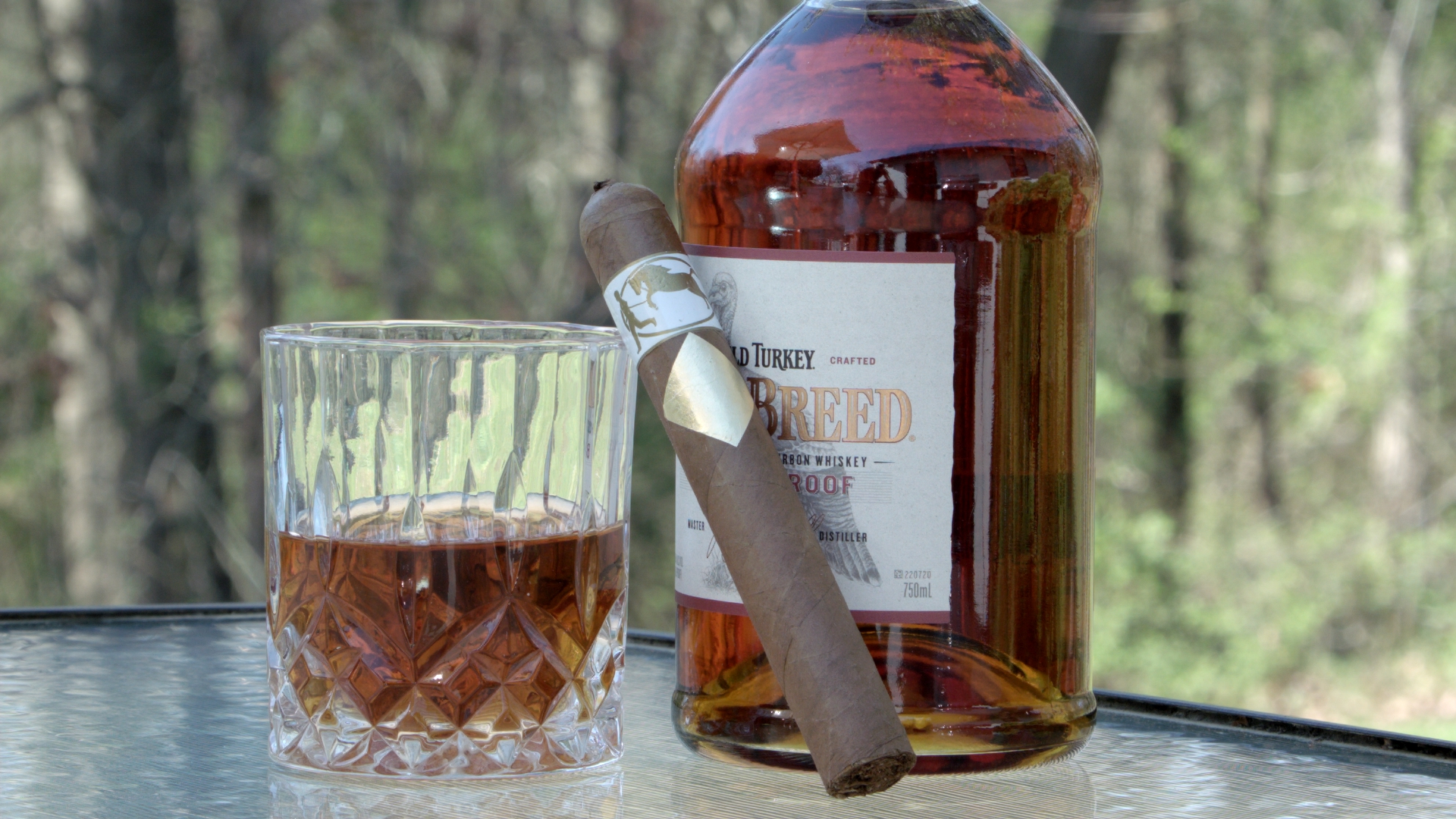 Stay away from the heavy stuff. Lighter beers, coffee, water, maybe a Coke; these are the way. Bourbons, whiskeys, and rums will easily overpower the cigar (even if it does look nice in that picture).

While I think Decoppet fell short of his goal for a “mild to medium but very complex cigar,” I still think Cavalier Geneve White Series is still very worth smoking. The cigar smokes smooth, is super approachable to everyone, and does what a cigar is intended to do: relax and satisfy. Not to mention, it’s still under the $10 per cigar threshold. A solid buy in my opinion. Especially if you’re a new smoker looking to graduate beyond super mellow smokes.

Reading Time: 7 minutes Looking for the most innovative new cigar accessories? We’ve combed the market for the latest must-have cigar tools, from hi-tech hygrometers and smart humidors to LED lighters and more… if you’re ready to upgrade your cigar gear, consult this guide FIRST – see the list inside!