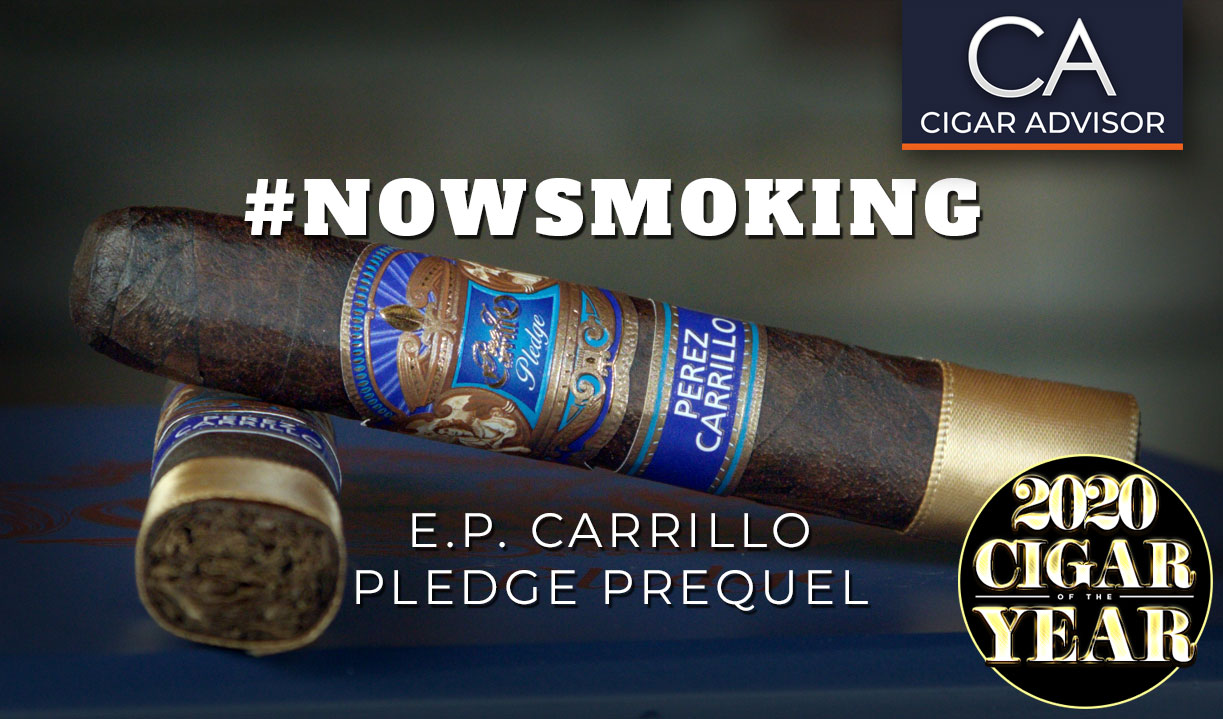 In a career filled with considerable milestones, Ernesto Perez-Carrillo has just added one more to the list – the E.P. Carrillo Pledge selection. Consisting of just two vitolas for its debut – four more will be added as they are ready for release – Pledge follows Encore and La Historia as the third release in this Perez-Carrillo series. It also marks Ernesto’s 50th year in the cigar industry, and was envisioned as a tribute by Ernesto to cigar lovers around the world. What it also represents is the growth of Ernesto Perez-Carrillo’s blending skills over his half century of work. 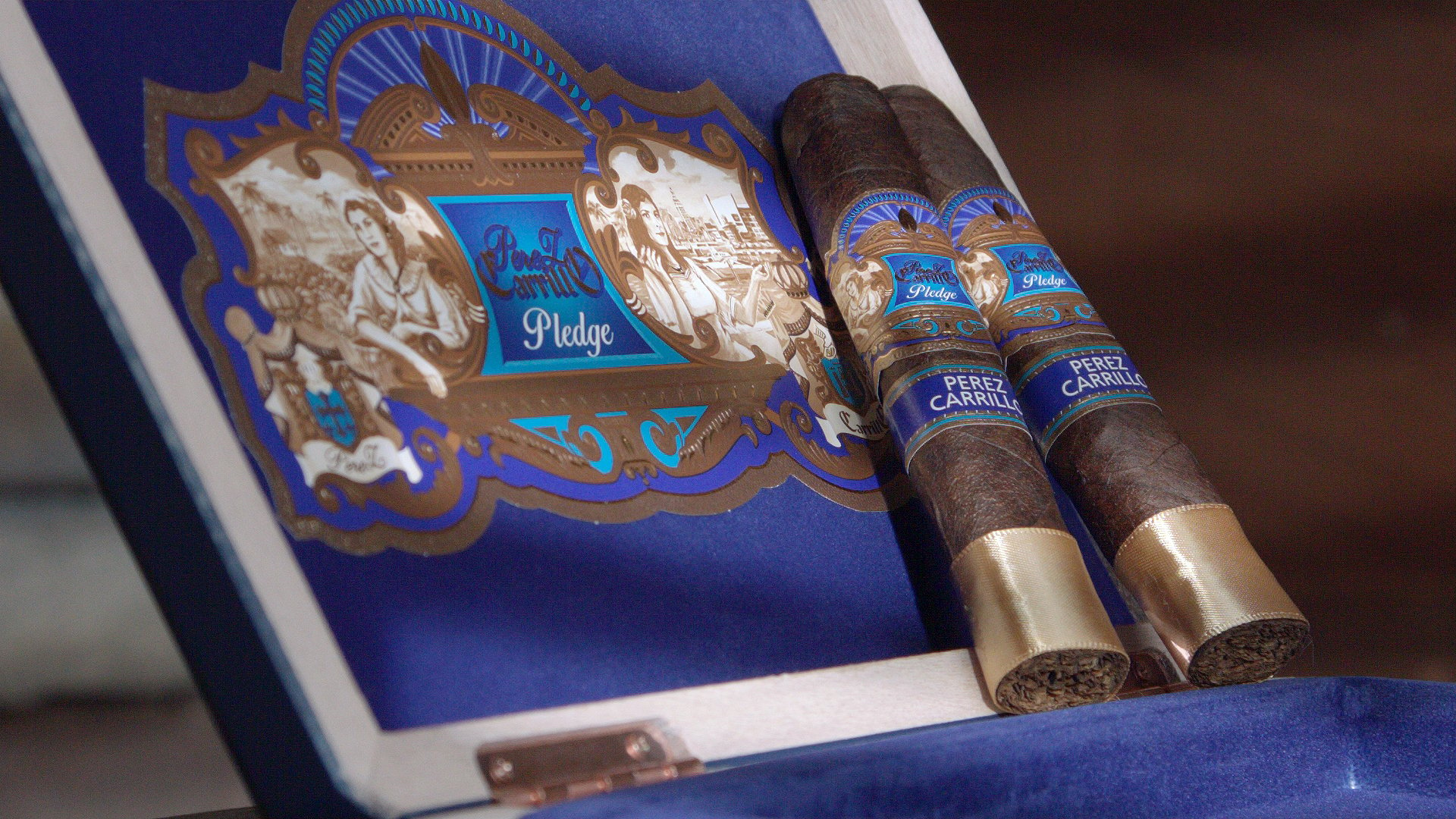 For this initial two box-pressed vitola release – the Robusto-sized Pledge and Toro-sized, 6”x52 Sojourn – one size focuses on his roots in Cuba, which contributes to tobacco being in his blood, and the second points to his core years of developing the skills that led to his reaching cigar blending royalty. 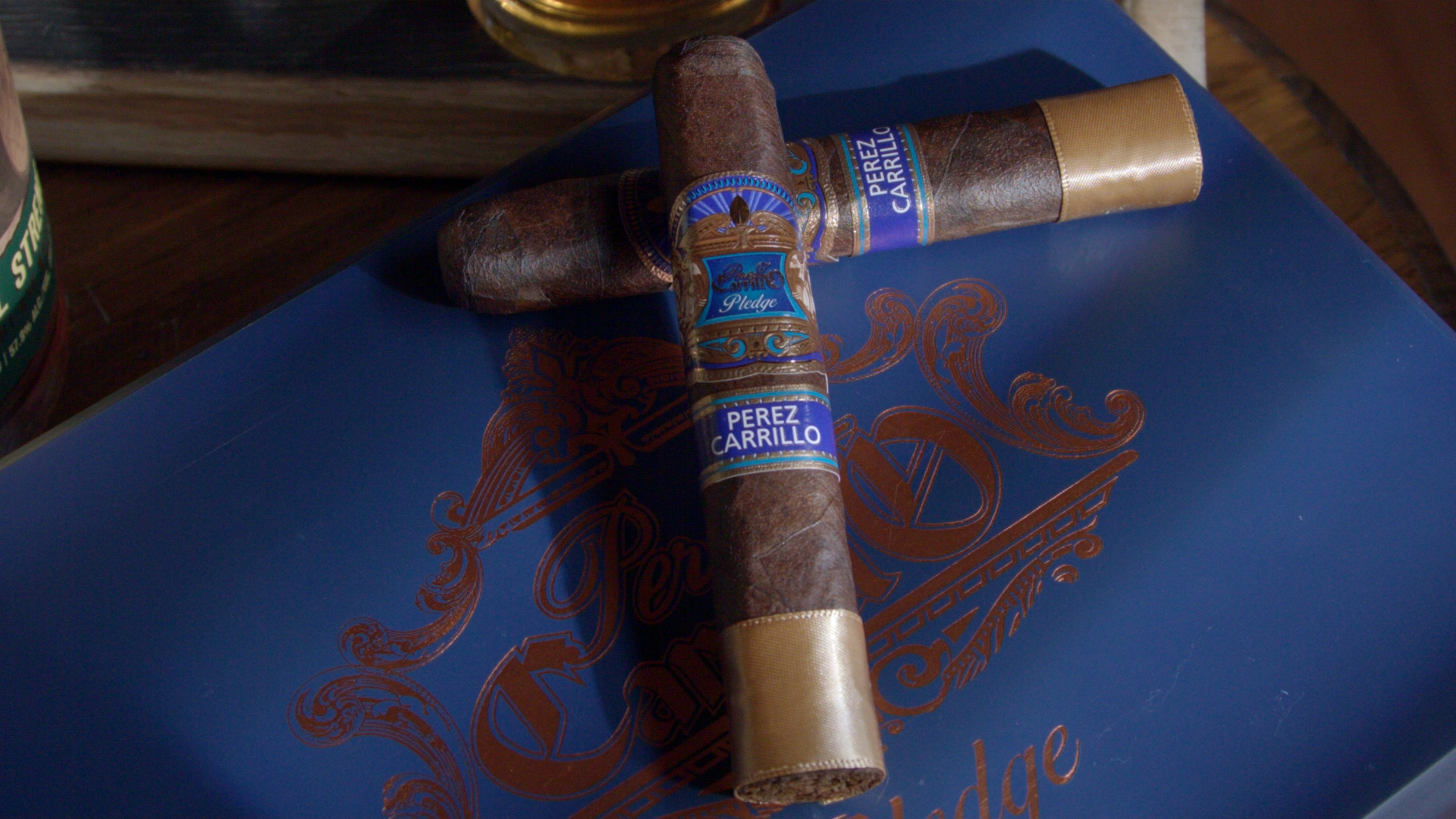 “I will never stop working with the best tobaccos and bringing new and innovative blends to you,” said Ernesto. “With each sample of the 6 different blends for Pledge I worked on, I asked myself, is this cigar worthy to follow La Historia and Encore, and I was very pleased when I found the one.”

Ernesto spent six months testing blends before settling on what ultimately became Pledge. Before Pledge shifted into full production, Ernesto made sure he could procure enough tobacco for three years. Additionally, due to the COVID-19 pandemic and its impact on the factory, production of this cigar had to be very limited. 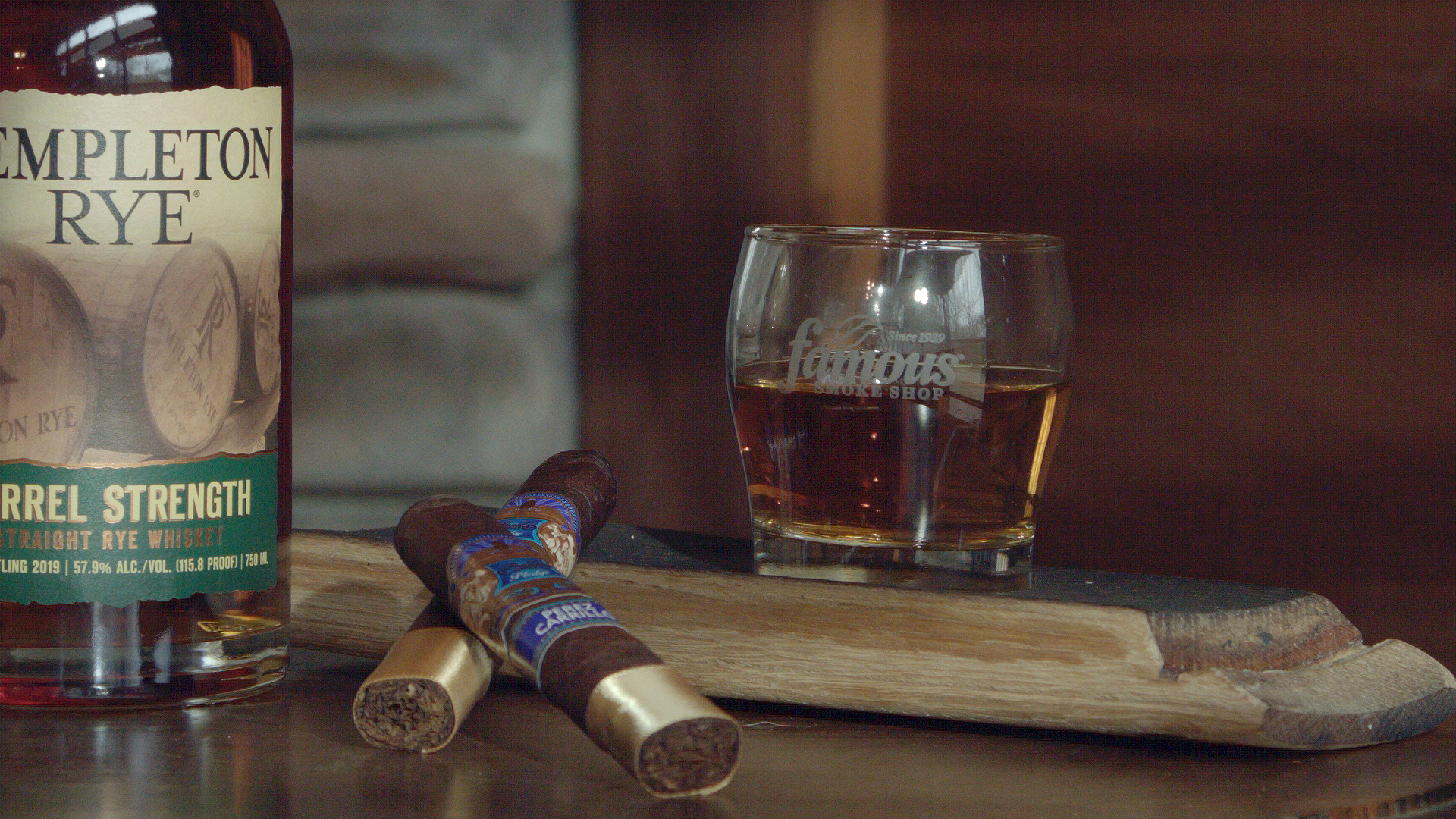 “I first became aware of the Connecticut Havana seed wrapper in the early 80s when it was not being extensively used by many manufacturers. This wrapper was relatively unknown in Miami; but when I was finally able to first smoke it, I fell in love with it. I started using it in some of the blends I was making at that time. More recently, I had only used this wrapper in 2 limited releases at E.P. Carrillo. With Pledge, it now becomes part of our portfolio. I couldn’t be more enthusiastic, as this wrapper and I go way back to my core years in developing my skills as a cigar blender.”

Beautifully. Even with its 5”x50 dimensions, the cigar seems to have a slightly bigger appearance. The pressing is just right, and the wrapper has reddish-brown marbling with an oily-leathery patina. The triple cap is deftly applied, and the cigar feels balanced and comfortable to hold. The cap clipped perfectly offering just the right amount of pull with notes of salt, leather, and spice in the cold draw.

(Acts I-III are the tasting notes I recorded while smoking my sample prior to doing the video.) 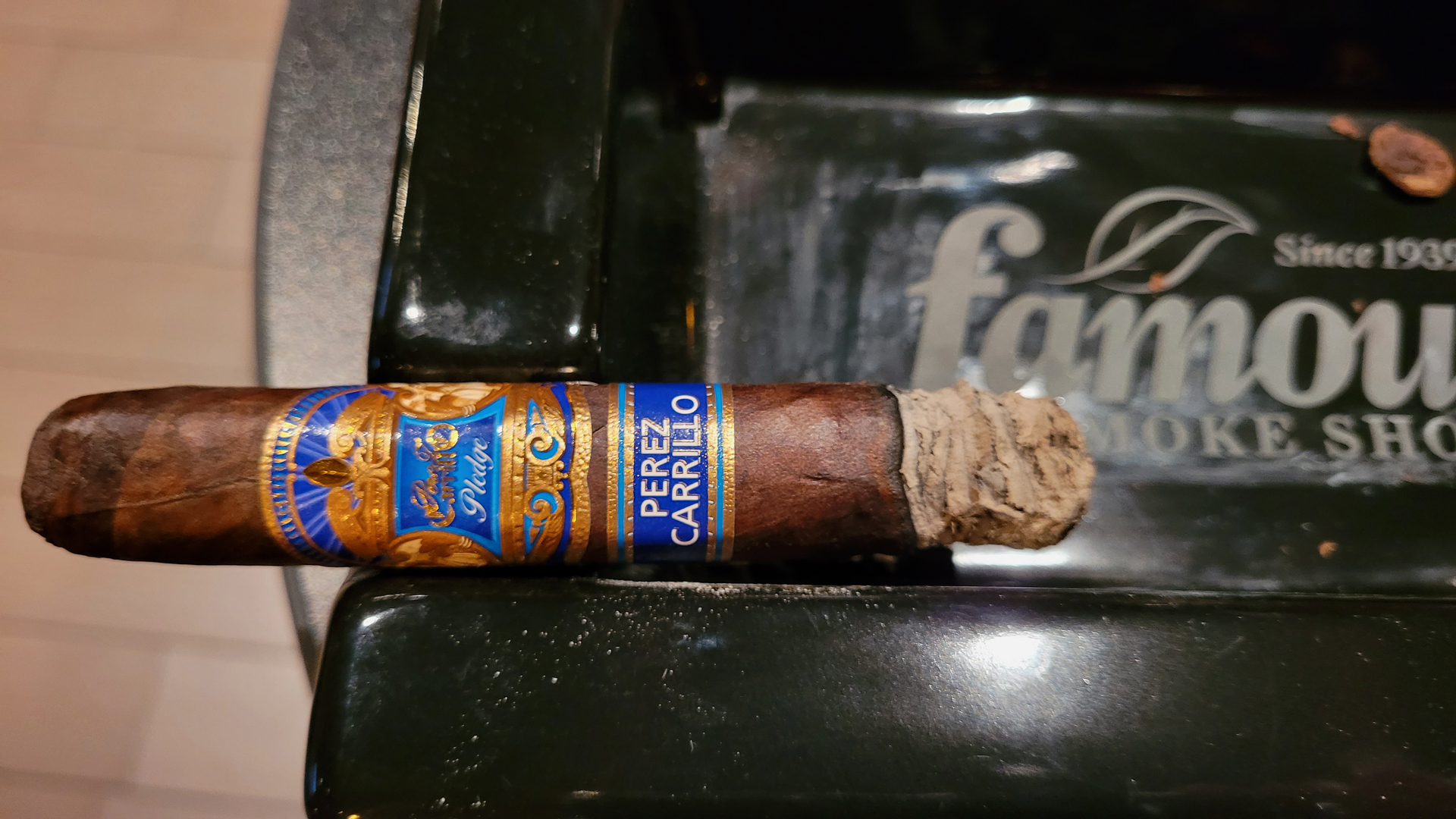 Initial puffs are still a little salty and leathery. The draw reveals a healthy amount of smoke which lays smoothly on the palate and goes down easy. The body begins in the medium zone with an equal amount of strength. Notes of sweet tobacco also enter the mix and the finish has a slightly peppery snap to it. The burn up to the first ash is pretty even, and the ash itself is quite firm. 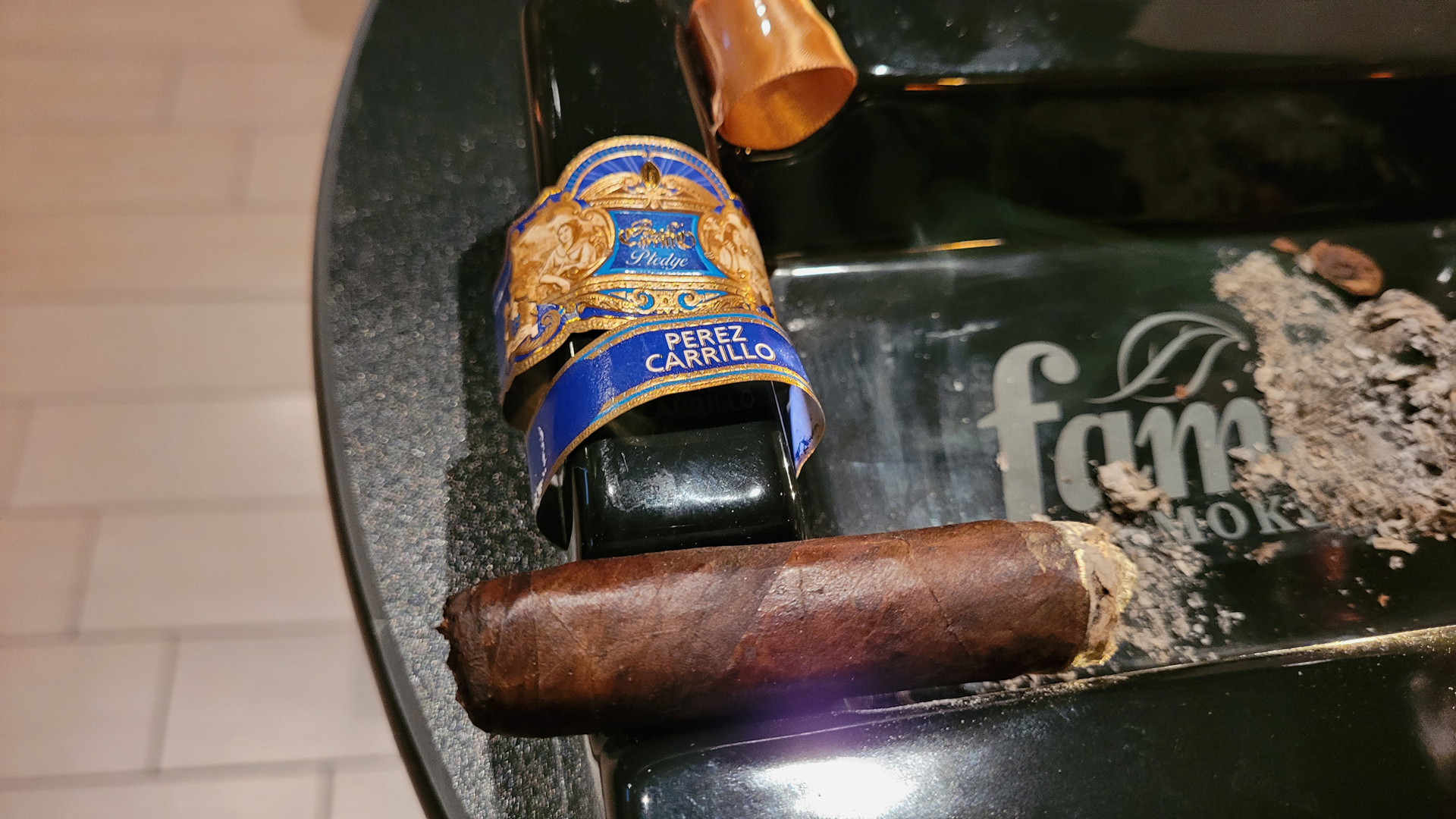 At the midsection, the strength remains on the medium end, while the body improves taking the cigar into the medium-full arena. At this stage, the salt has all but faded, but there’s still some leather in there. Some woodiness also arrives at this juncture and the cigar seems to have taken on more of a sweet-spicy character – certainly sweeter than the previous section. The finish remains spicy with a fair amount of pepper and baking spice. There’s something about how the smoke just seems to coat the entire palate with this wonderful, full-on chewiness, while retrohales have more of a black pepper reveal. At this point everything is running at full potential. 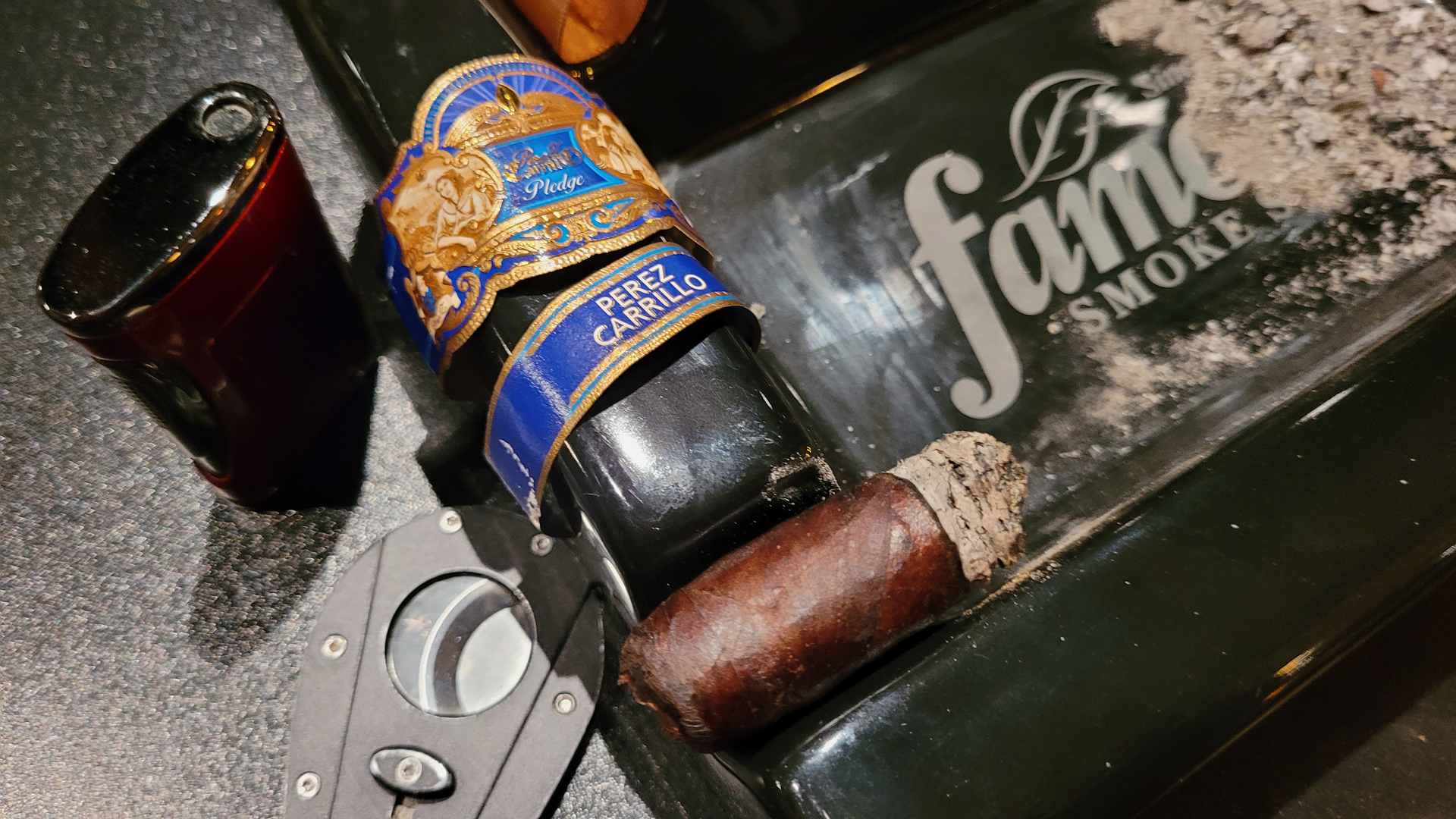 But that’s far from the last of it. At this stage, I’m starting to wish this cigar was a bit longer just so I can get a few more minutes out of it. The sweet spice has moved toward the back and I’m now getting a bit of earth and black coffee. The leather and baking spice remain in the mix, and occasionally there’s a snap of tart fruit. But the overall flavor profile is a well-rounded serving of woodiness, semi-sweet treats, and peppery spices.

Jack Daniels Heritage Single Barrel Whiskey, or a good rye. I also think The Macallan 12 Year Double Cask would make a fine match-up. Wine lovers would do well pairing it with a Californian Paso Robles Syrah. 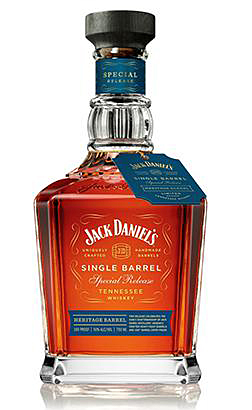 Final Thoughts. . . This cigar is a sparkling gem from first puff to last. Anyone who calls themself a cigar smoker should experience the Perez-Carrillo Pledge – not because it was awarded “2020 Cigar of the Year” either. Because it’s loaded with chewy flavors and a fullness that only comes from using the most perfectly aged tobaccos. I smoked it well before it received its #1 ranking and knew then that this cigar had something special going for it. It’s worth every penny, too. Ernesto could’ve charged more for it, and I would’ve paid it. Pledge represents another fitting milestone in a cigar-making career that’s spanned more than half a century, and Ernesto is far from finished.

So glad you liked it. I was talking to a few fellow BOTLs the other night and they made the case for Ernesto Perez-Carrillo as the world’s best cigar maker.
That’s one of those cigars you always want to have at least a few in the humi. Thanks for the comment.

Read More
Cigar Ratings & Reviews
Estelí is the mecca of Nicaraguan cigars; and we're taking on the new Alec Bradley Black Market Esteli Toro to see if it's as potent a ride as promised. Does the follow-up to the highly-rated AB Black Market selection satisfy? Get our notes, watch the video and see for yourself!
Read More