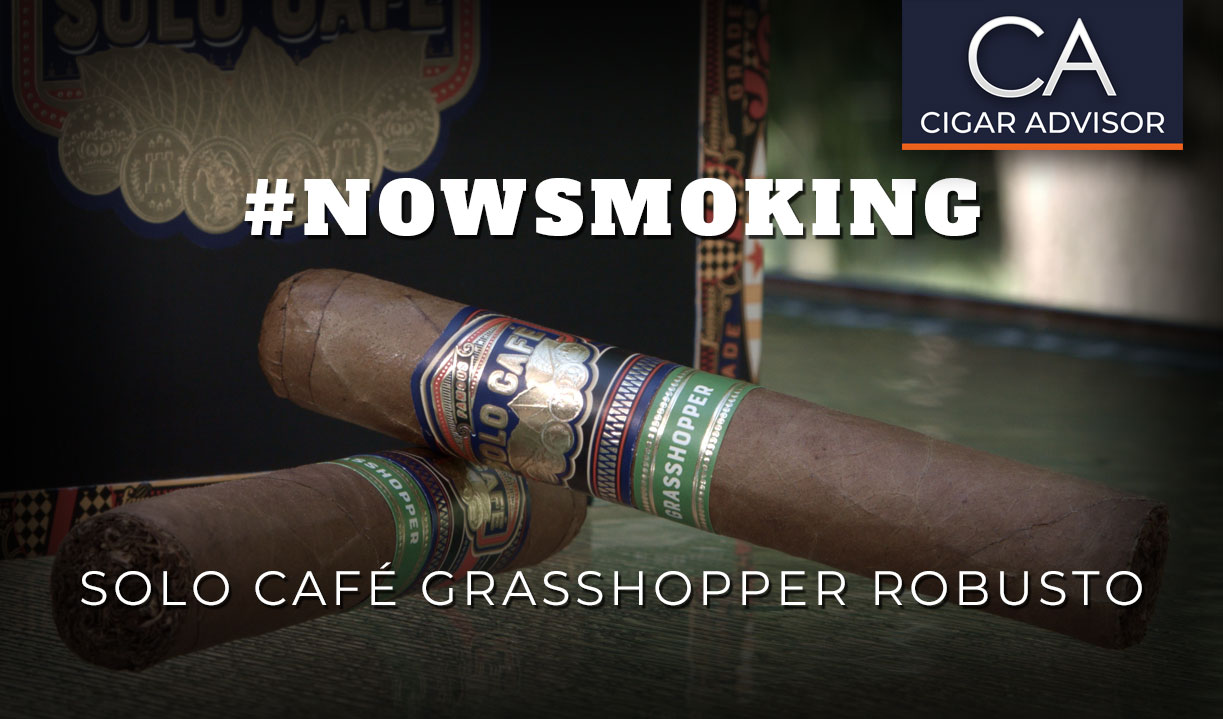 Usually when I do these reviews, I have some documentation on the featured cigar to give me a more detailed account of what I’m smoking. In the case of this Solo Café Grasshopper Robusto, not so much. But I do remember, about a year or more ago, when Famous Smoke Shop received some exclusive Solo Café brand coffee roast blends made by PDR Cigars. Actually, I was surprised PDR was even making infused cigars since they are best known for some of the mot outstanding, traditionally-blended premiums.

The first arrivals were Solo Café Natural Roast, Solo Café Medium Roast, and Solo Café Dark Roast. They were all well-made, had beautiful wrappers, light and creamy in character, and offered a more subtle coffee flavor and aroma than say, a Tabak Especial.

Then, as many cigar brands often do, another Solo Café was added to the line: the Solo Café Grasshopper. Offered in Robusto and Toro sizes, my sources tell me that before this Dominican puro became part of Famous’s Solo Café selection, it was once a predicate blend made for another cigar company. All I can add is that the Solo Café Grasshopper Robusto was the most unusual cigar I’ve ever smoked, infused or otherwise. 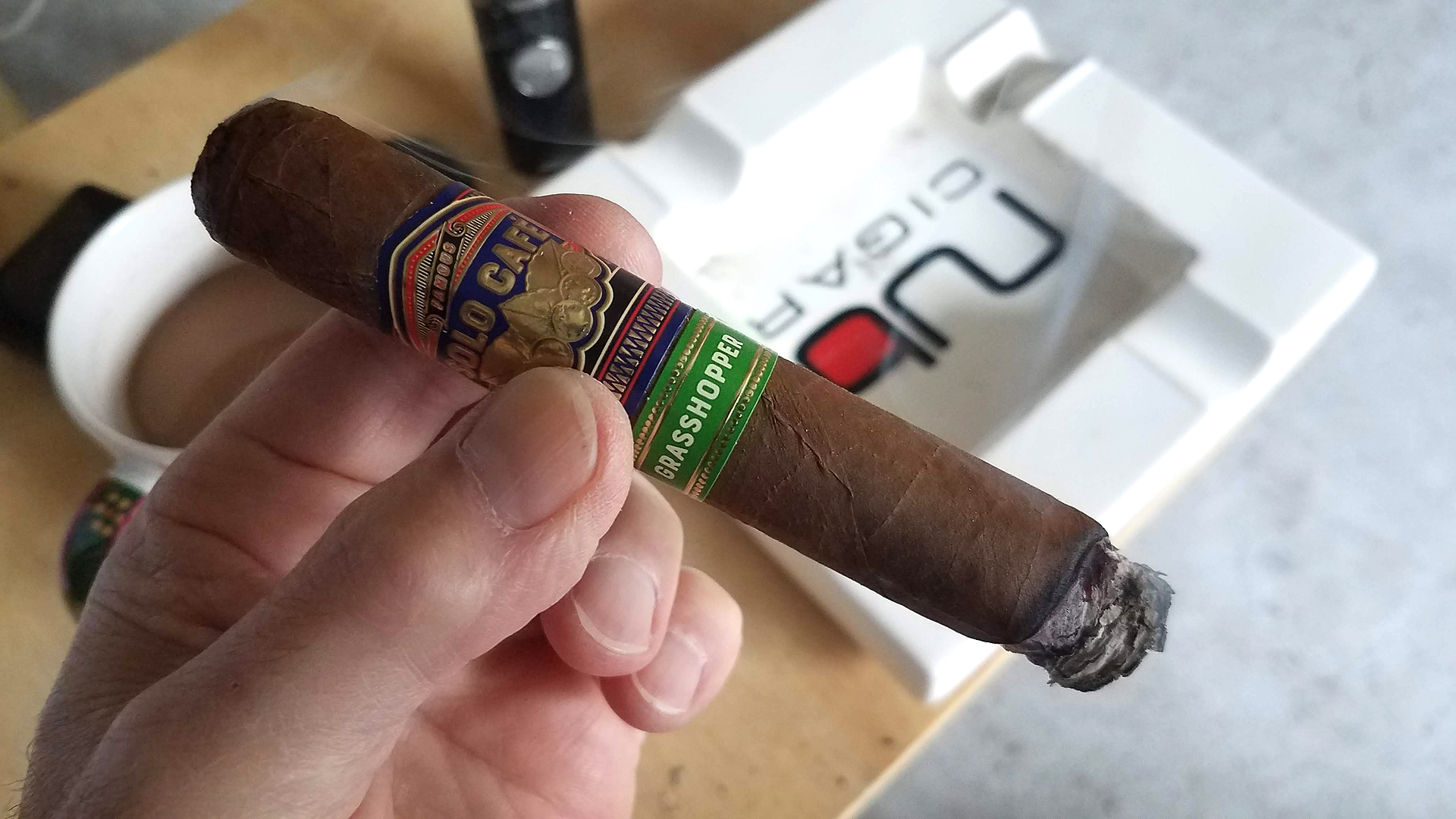 Very well. Top construction is one of the hallmarks of PDR-made cigars, and the Grasshopper is no exception. It’s solidly rolled, and the Claro wrapper is pretty, but the usual PDR pigtail cap is missing. The first thing you notice is the aroma. It is pungent! Right through the cello, too. It has this sort of slick, oily coffee fragrance with a pronounced minty streak. Once clipped, as I put the unlit cigar to my mouth, I got a mix of the cap sweetener, chocolate and coffee syrup, and a blast of Junior Mints. That’s right, I said it! Junior Mints all the way.

The smoke is smooth, mellow, draws easily, and very minty in a way that’s much closer to menthol. It takes some getting used to because such a bold minty taste is not something I associate with cigars, even coffee infused cigars. It took about an inch or so, but I finally adjusted to the Grasshopper’s unique flavor. I must say, it was impressively well-balanced and even the aroma had a pleasing, coffee complement to it. 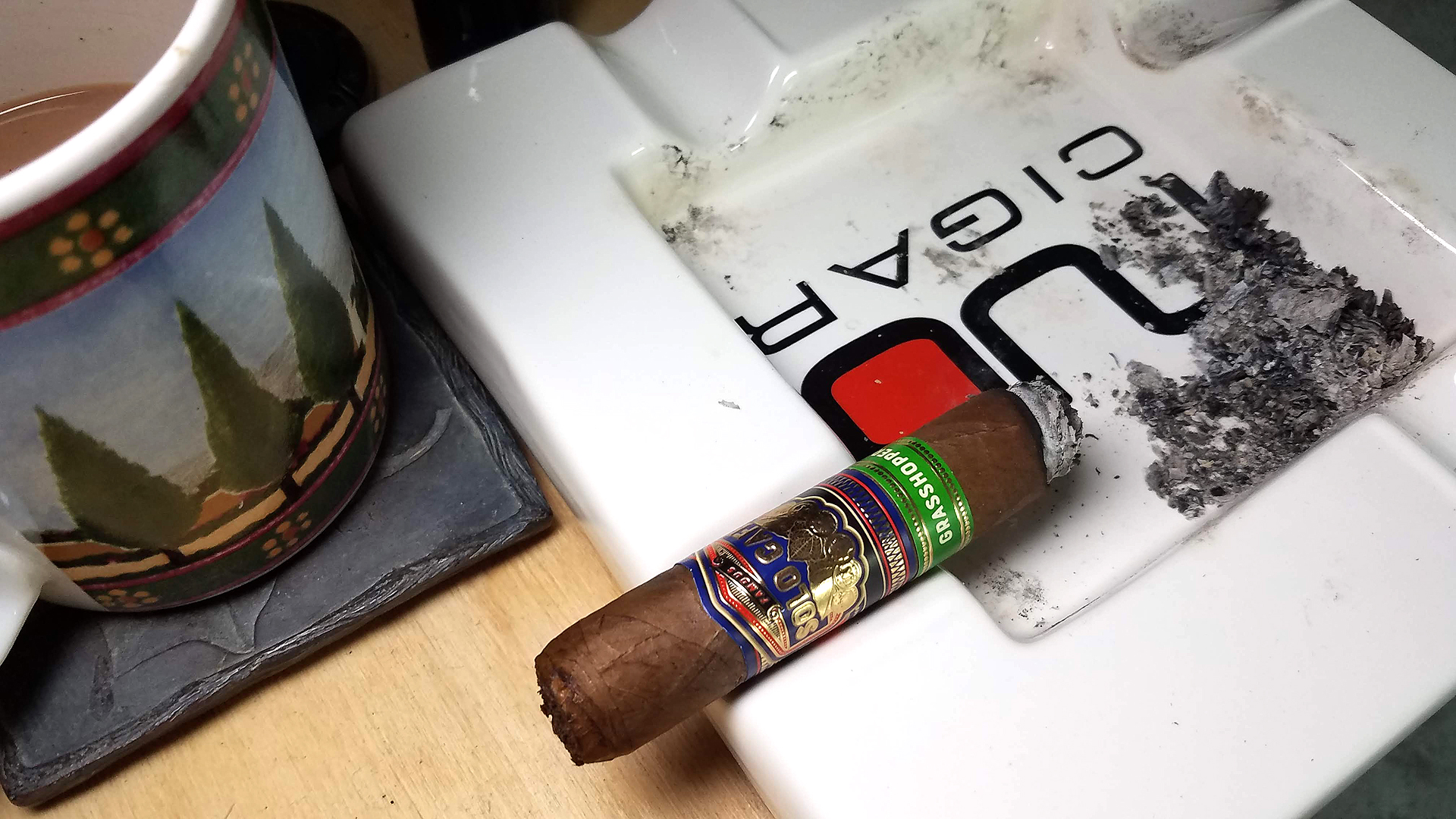 The cigar burned well and evenly for the most part, but ashed a little messy. The ash burned grey and held on well. But when tapped, it broke-up into a small pile of ash rather than the usual nugget. I believe this was a result of the oiliness from the infused leaves. Besides, I don’t usually take off points for such things. 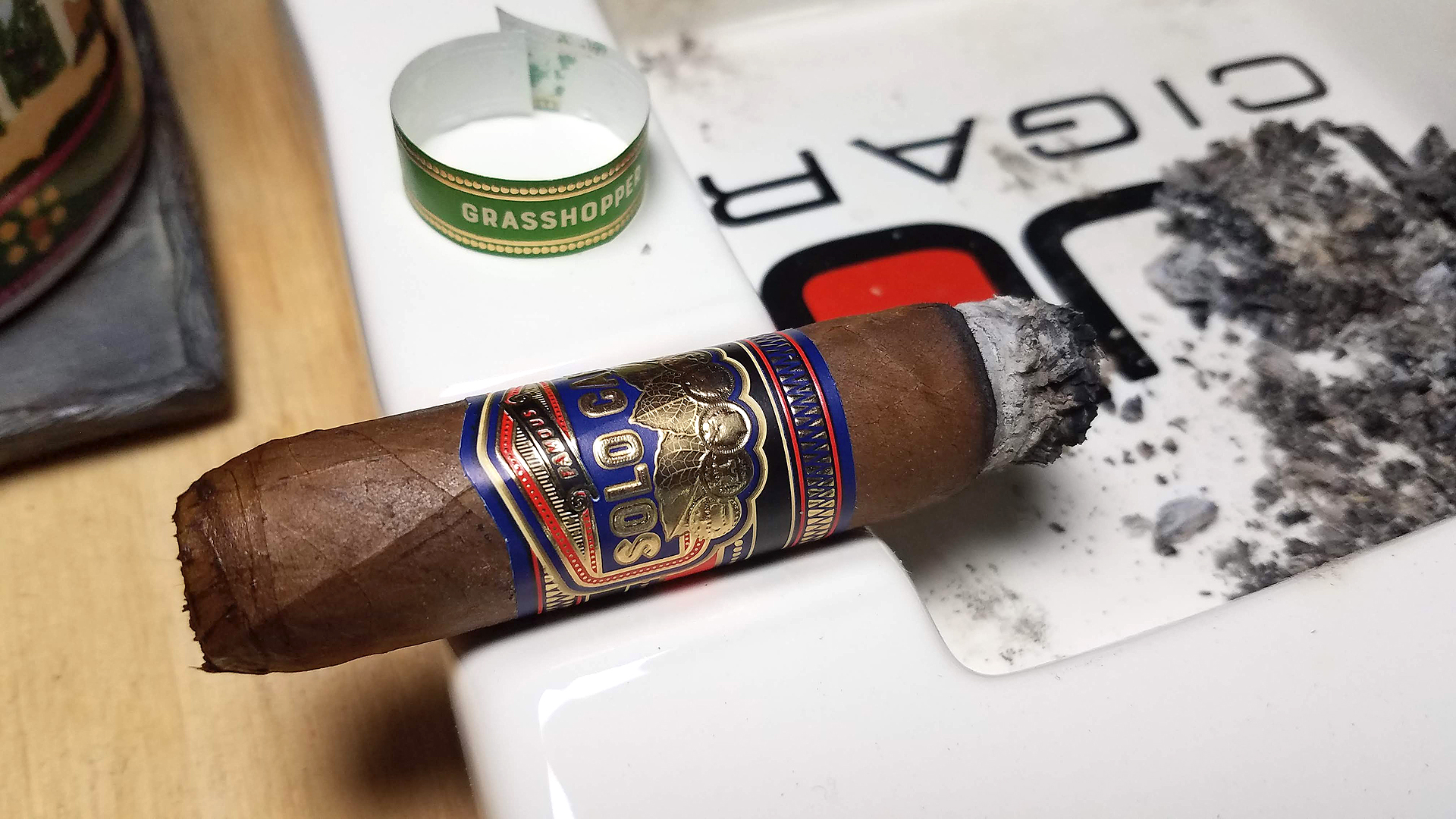 Now here’s one of the most interesting things I discovered about the Solo Café Grasshopper. It’s great for practicing your retrohale technique. If the mintiness seems a bit light, you’re not getting enough smoke through the nose. When that uber-minty smoke comes through the olfactories like a runaway freight train, you‘ll know you‘ve got it right. It’s not peppery, either.

The menthol part of this cigar may be a bit overwhelming for some, but if you were once a smoker of Newport or Kool cigarettes, you may find the Grasshopper right in your wheelhouse. 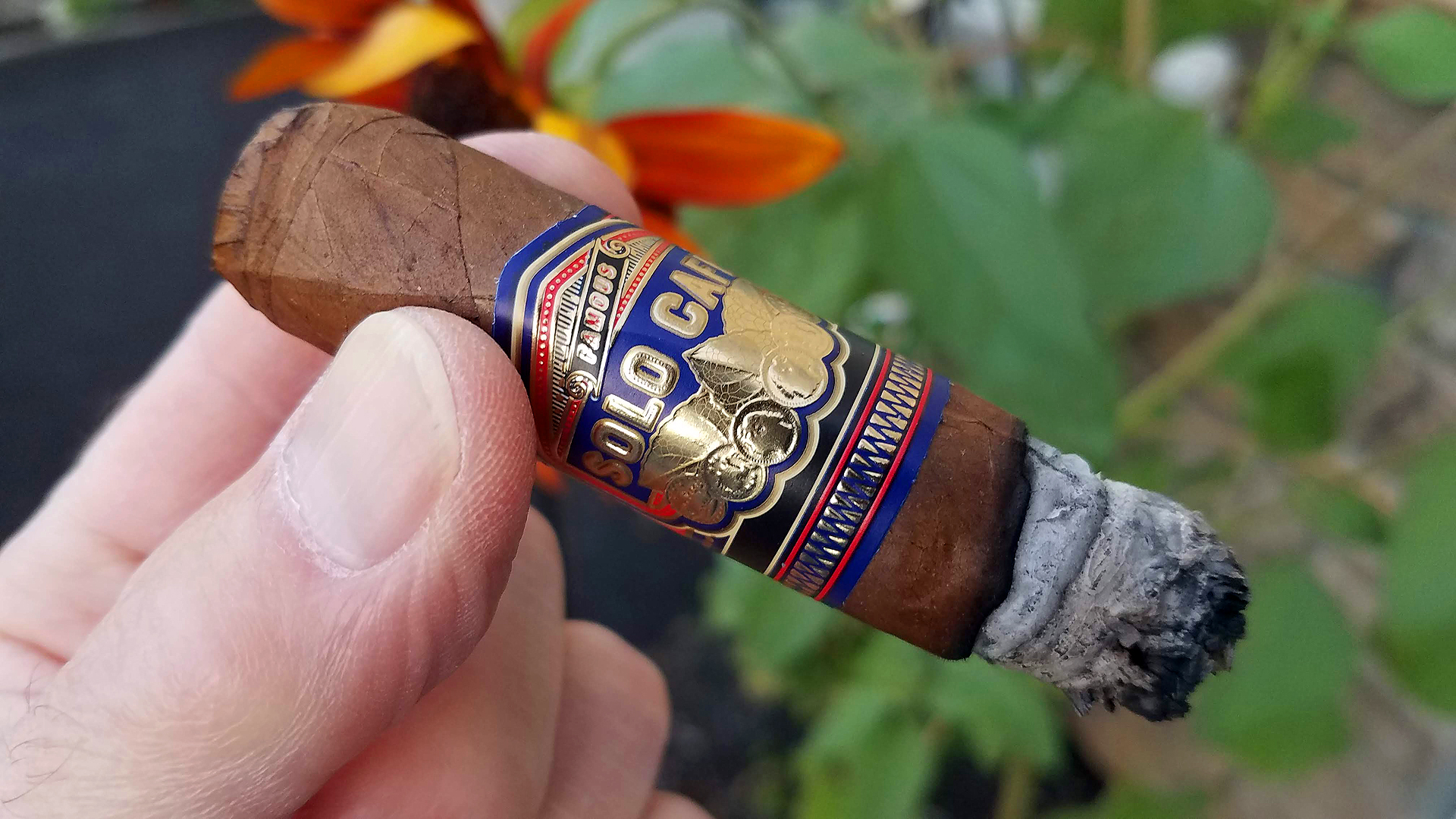 Mellow in strength, but closer to medium in body, offering a sweet, well-balanced mix of coffee syrup, chocolate syrup, and a heavy dose of mentholated mint. 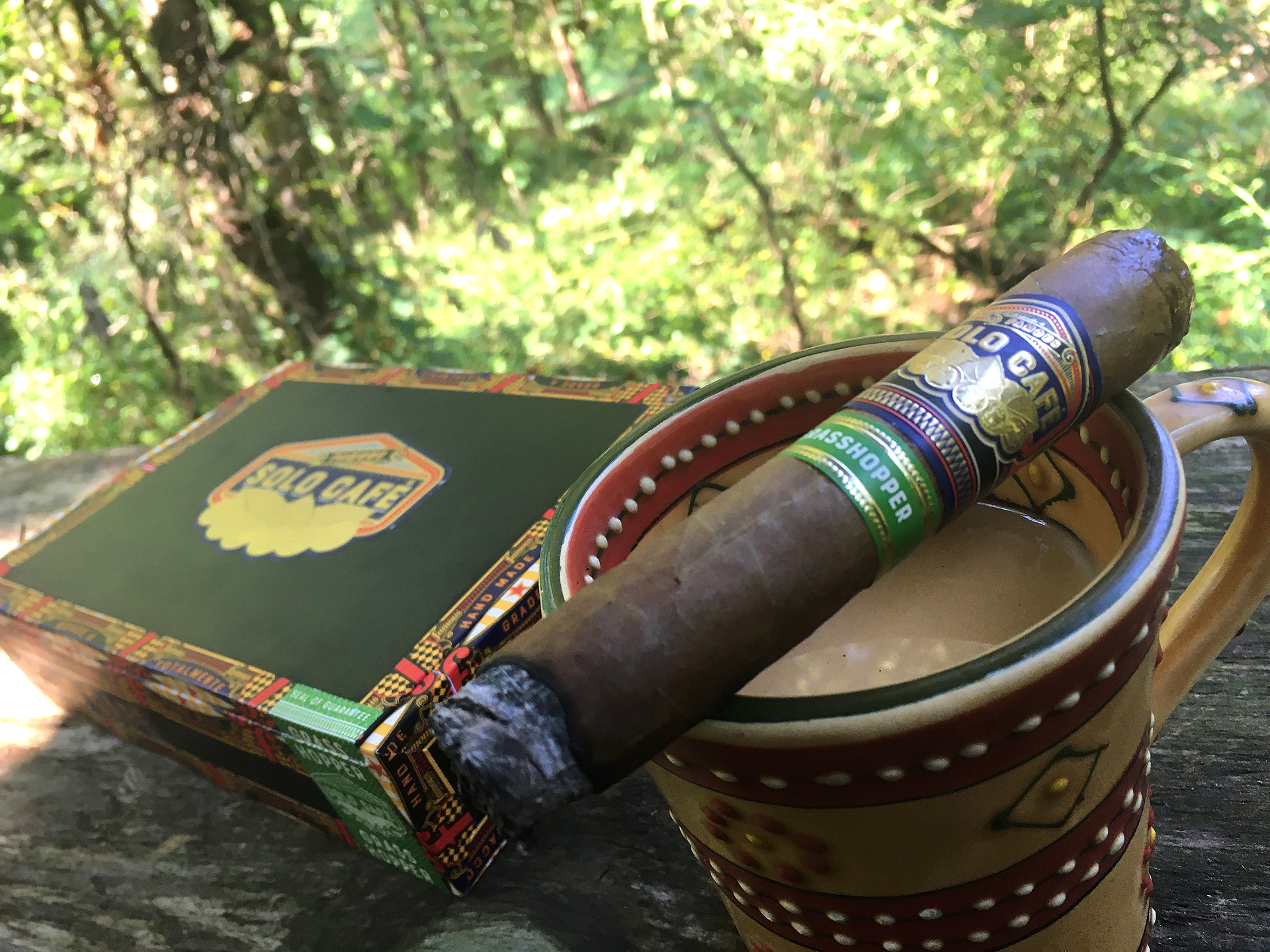 For the Solo Café Grasshopper, I would recommend a drink that adds something extra to the flavor pool. An orange liquor like Cointreau, or even better, Sabra chocolate-orange liqueur.

If you’re an adventurous type of cigar smoker who’s into cigars like ACID, Tatiana, CAO flavours, and coffee-centric cigars like Java and Tabak Especial, you’ll want to give the Solo Café Grasshopper a spin. And you may want to do it sooner than later, since many flavored cigars are in the process of being eliminated in several states. And for under $5 (at press time), the Robusto is an investment worth satisfying your curiosity.

I think the idea behind the Solo Café Grasshopper was to go for something similar to Java Mint, which offers a much more subtle chocolate mint flavor. If that kind of thing is in your wheelhouse, but just doesn’t have enough kick for you, give the Grasshopper a shot.

Reading Time: 4 minutes “You can tell the Maestros chose some really prime leaf,” says Gary referring to the all-Honduran tobacco core in his review of the H. Upmann 1844 Classic Robusto. This latest addition to the H. Upmann 1844 Heritage line also boasts an Ecuador Connecticut Shade wrapper. This combination amounts to what the company calls a “next level shade” cigar.” Learn more about that and what Gary thought of this cigar now.

Read More
Cigar Buying Guides
As we count down the days 'til Christmas, time to make a cigar run and pack the humi with some top-notch sharing smokes...try these hand-picked Top New Cigars, hand-picked to warm your cockles: click NOW to get 3x the Monte, a very robust new Romeo, and a fresh Aging Room delight.
Read More