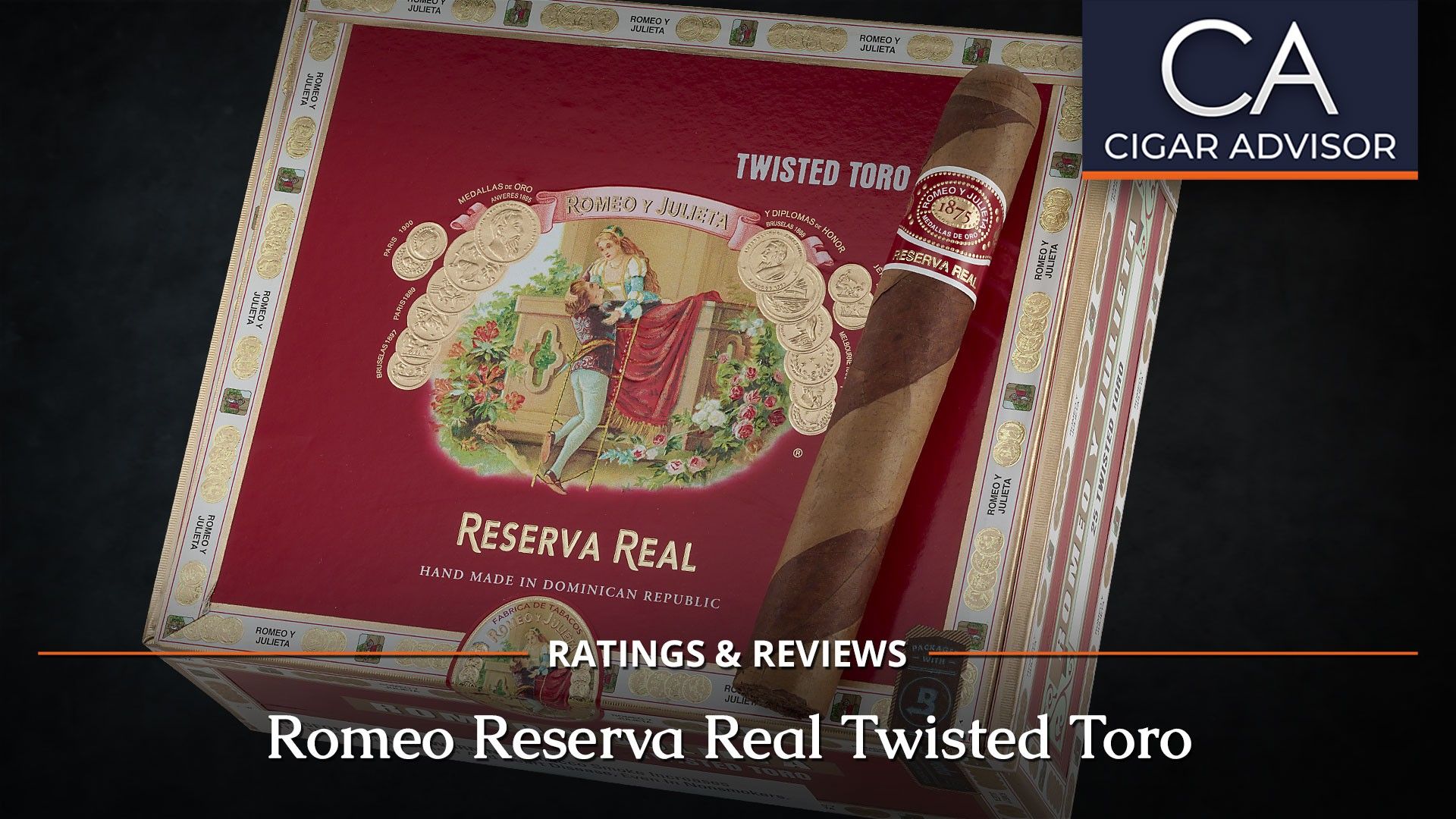 “We wanted to bring a little innovation [to Romeo y Julieta Reserva Real] without departing from what makes this line very successful—fantastic flavors, aroma, and smooth character. The addition of the Maduro wrapper brings more complexity and flavor.”

Barber pole cigars have had their ups and downs. They were starting to catch on before the pandemic, especially from boutique manufacturers who were all too happy to ride any wave of popularity they could find in a market known for its uphill battles. As such, barber poles from brand names are fewer and farther between. The most notable among them is Alec Bradley’s Filthy Hooligan which releases annually ahead of St. Patrick’s Day. These bigger names just don’t tend to make them as often…meaning Twisted Toro is a bit of a gamble.

We’re here to see if Romeo’s bet paid off. Check out our individual reviews, along with our video panel review to see what we thought. As always, share your opinion in the comments below!

Construction: Wrapped with alternating Connecticut and Habano wrappers, each leaf with a satiny sheen. This is a big cigar – has a nice give when you squeeze.
Draw: First stick had very generous airflow, on the edge of too open for my liking. Takes a good amount of work to get it to produce smoke – once you do, it’s cool, buttery and kind of chewy.
Pre-light flavor: Sweet, with a hint of leather.
Toasting & Light: Heavy on espresso, along with a more general “roasted” taste.
Base flavors: Coffee and cream, fruit, chocolate, and hay.
Retrohale: Bready, plus a little pepper. Later it reminded me of one of those big, doughy hot pretzels.
Aroma: Toasted grains and sweet there, too.
Burn & Ash Quality: Ash is grey and flaky; the burn is a bit off on one sample.

Summary: So if this is your first barber pole cigar, a little something to keep in mind about the experience…it’s not like your palate will pick up on the alternating flavors of the wrappers, because you’re really smoking them at the same time. You won’t smoke it and say, “oh I taste the Connecticut.” Then two minutes later, say “ooh it tastes like Habano now. Wait, there’s the Connecticut again. Now it’s Habano.” It works more like chocolate and vanilla swirl soft serve – there are qualities of both wrappers present in the profile. And taken together, the whole thing (when done right) has more complexity and feels fuller bodied.

Now, as it really happened: once the espresso notes fade off the first few puffs, the Twisted Toro becomes sweet and toasty, still with a hint of coffee bean. The sweetness is a cross between chocolate and a subtle tree fruit (think pear). Add in a coffee-with-cream kind of taste and hay, and that’s the first third. So far, it’s one of the sweetest Romeos I’ve ever smoked.

Something starts happening at halfway: it’s smoking with more strength. Got some more body. Some more spice. And the Romeo Twisted Toro has developed a dry, herbal quality like fennel.

On the way to the finish, there’s some strength and complexity to the profile – especially on the spicy side. It’s more than bite, it’s nutmeg and cedar. Less sweet, but it’s still got some as it finishes.

The cigar you see me smoking in the video burned dead straight; the first one I smoked was a little off kilter. But keep in mind that the binder inside the cigar is working extra hard, keeping TWO wrappers (each wrapper with its own distinct combustion properties) lit and burning at an even pace with the filler tobaccos.

If you’re the type who appreciates cigars as art (which is not everyone, and that’s perfectly fine) – there’s more to love than usual with this Romeo Reserva Twisted Toro barber pole. The intertwined top coat of Connecticut and Habano leaves is especially eye-catching, and it’s obvious that there is a talent needed to roll these cigars. That’s why some people see them as a novelty. But with its nice thick and chewy smoke, and an abundance of nuances from both wrappers making up its profile, this is no novelty.

Construction: Nice big cigar. The rolling is firm and the cigar has some nice density. I found no soft spots, the seams are neat and the triple seam cap is well-made. Although this cigar measures at a 54 ring, it looked and felt more like a 60-ring.
Draw: Excellent.
Pre-light flavor: Nutty and woody with a slight mineral note.
Toasting & Light: No issues.
Base flavors: Cedar, almonds, citrus tang, plus nutmeg, sweet tobacco, and light spices.
Retrohale: N/A.
Aroma: Semi-sweet.
Burn & Ash Quality: Good for the most part. At times it did burn a little raggedy.

Summary: The Romeo Reserva Real Twisted Toro started out with a familiar sharp peppery spice. However, that settled down quickly revealing a crisp woody flavor with a spicy finish. At about an inch in, the cigar rounded out further revealing a cedary and nutty flavor and an underlying sweetness. The cigar maintained its crisp woodiness into the midsection accompanied by a more citrusy tanginess on the finish.

At the midsection the cigar was smoking smoothly and with good balance. The nutty flavor became more well-defined offering an almond-like taste. Eventually, the Toro transitioned to more medium-plus in body while the strength remained comfortably in the medium zone. 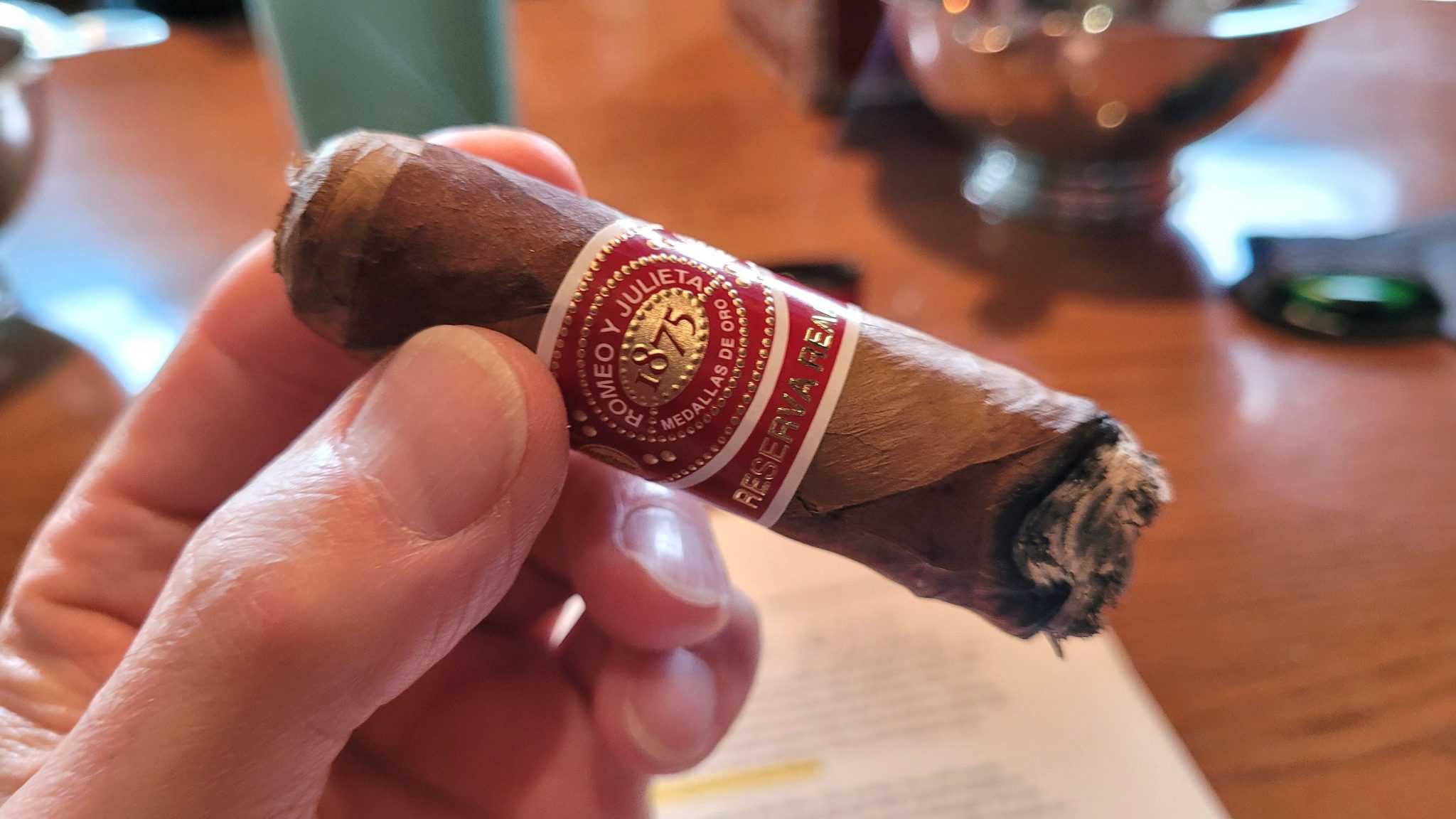 In the final stage, the core flavors were still mostly cedary, tangy, and nutty augmented by a fresh note of nutmeg. Then, suddenly, it was as if all of those flavors merged and spread out over my entire palate. That was nice! Plus, the cigar never shed its medium-plus body or medium strength in the last act.

I liked the way the smoke shifted from woody and tangy to nutty and how they all came together in the end. My cigar smoked for about 90 minutes. So, I see the Twisted Toro as a good smoke to enjoy watching football, relaxing uninterrupted in the lounger, or as we pointed out in the video—a good Christmas cigar. The medium body also makes the Reserva Real Twisted Toro a good choice for most cigar smokers. If you’re into comparisons, the closest cigar I can match it to would be the CAO America Monument at 6¼”x54, which is also a barber pole.

Suffice it to say… I found the Reserva Real Twisted Toro pretty satisfying. Therefore, I’m recommending it, but mostly for those who really like quasi-complex cigars with larger ring gauges.

Construction: Barber poles are difficult to roll and they’ve made it look easy.
Draw: Excellent.
Pre-light flavor: Woody and a hint of pepper.
Toasting & Light: Earth, cedar, and spices.
Base flavors: Leather, cedar, earth, vanilla, coffee, and white pepper.
Retrohale: Spicy-ish but keeps its temper.
Aroma: Warm and sweet, almost like a freshly-baked pastry.
Burn & Ash Quality: I tend to have issues with barber pole ashes because of the different wrapper densities, but this holds up.

Summary: Most cigars can be divided into thirds. Sometimes they’re distinct. Others, the changes are subtler. Barber poles, conversely, tend to be harder to divvy up. Romeo Real’s Twisted Toro is no exception. The best way to describe it—smoke two cigars at once. Because…that’s basically what’s happening.

I’m getting leather, cedar, and vanilla from the Ecuador CT. Simultaneously, the Habano provides warm spices, earth, and coffee among a marination of hearty peppers. Complexity is kind of off the charts because both wrappers are going through changes at different intervals. And though it’s complex, it’s not headstrong at all. It displays the rare holy grail of balancing flavor and intensity perfectly.

I think the reason that barber poles haven’t caught on as much in the mainstream is because of how rollercoastery they are. They can be very exciting to smoke, but after enough of them, you’ll need a break. My suggestion is to grab a box and smoke them occasionally–especially with the holiday coming up. Pair it with a spiked hot chocolate. Twisted Toro is well worth your time as long as you’re not trying to make it a daily burner.

Summary: I found the Romeo y Julieta Reserva Real Twisted Toro offered a study in contrasts. Not only visually—the profile was a textbook example of balance and complementary flavors.

The beginning notes reminded me most of graham cracker—bready with a balance of sugary sweetness and Christmas spices. And what I mean by X-mas spices are the warmer, baking-cabinet spices like cinnamon and nutmeg. There is also dark coffee present, with an undercurrent of dry cedar and citrus tang taking turns at the wheel. 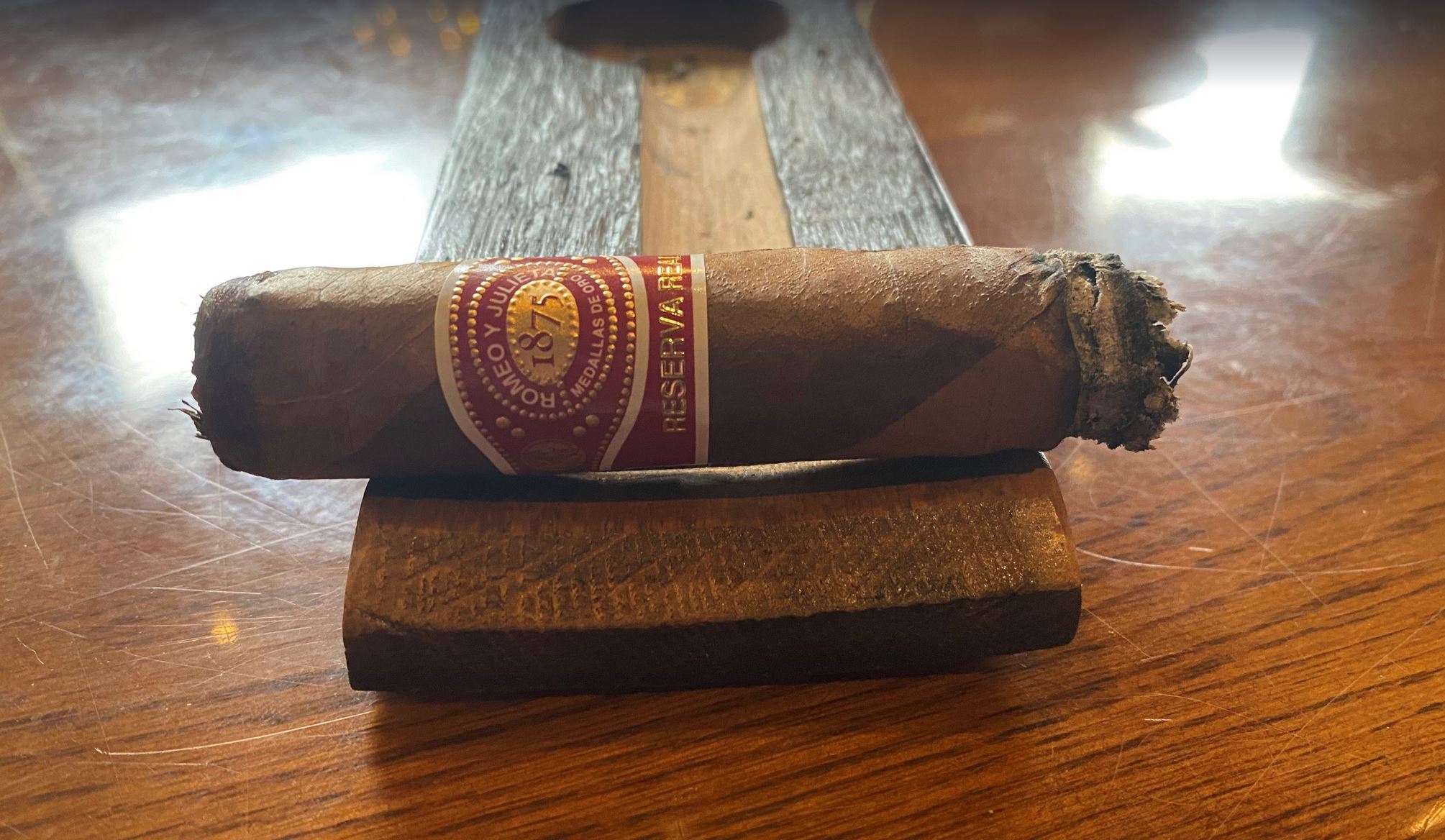 As the Twisted Toro progresses, the medium-bodied profile gains in intensity and richness. The base flavors become more rounded as they mix and mingle while the overall experience grows in complexity.

Our cameraman said that the Twisted Toro makes an excellent Christmas cigar. And I think he hit the nail on the head with that one. Beyond the ‘candy cane’ like appearance of the contrasting wrappers, the flavor profile reminded me of enjoying gingersnap cookies with a glass of milk—spicy, sweet, savory, and creamy. Try the Twisted Toro—it might become your yearly Christmas cigar.

Reading Time: 3 minutes Diesel, Davidoff and Desert Rose: this weeks Top New Cigars have landed in our humidor, ready to ship to yours! See our latest additions inside…