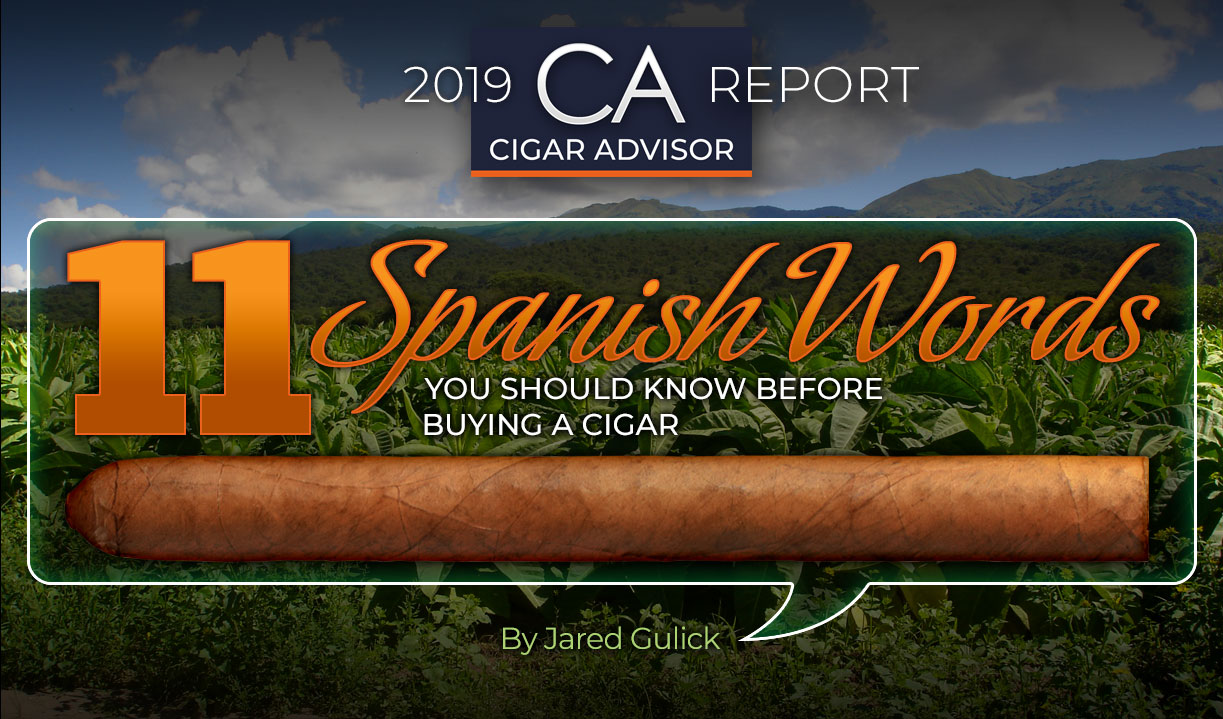 Does the Spanish terminology inscribed on cigar packaging have you lost in translation?

Walking into a humidor the first time and seeing so much of what you need to know in another tongue might have you thinking, “how the #$!? am I supposed to figure this out?”

We’ve whipped up a list of several common terms to help make your initiation into the world of cigars one that doesn’t have you scrambling for Google Translate, or putting your Babbel app on tilt.

There’s a deep, impassioned Spanish culture that goes hand in hand with your favorite sticks, and we aim to remove the lion’s share of that language barrier for you in one fell swoop.

In no time at all, you’ll be talking about how much Ligero is in your Figurado with a Habano wrapper, and you’ll wonder why you were so worried in the first place!

Figurado is the generic term given to any cigar that is not a Parejo (straight-shouldered cigar), but sometimes, manufacturers will use it as the name of a cigar size (or vitola… we’ll get to that!) – Oliva Serie V Melanio Figurado is a perfect example. If you see Figurado listed either generically, or with reference to a specific cigar, expect that the cigar will be tapered in some way instead of straight.

Some common Figurados you’ll come across are:

Torpedo – a tapered or straight cigar with a head that comes to a sharp point.

Belicoso – like a Torpedo but the head is rounded instead of sharp. Belicoso means bellicose or aggressive.

Salomon – tapered at both ends, usually getting wider from the head down, and then narrowing abruptly at the foot to form a nipple tip. These cigars are extremely difficult to roll and are usually entrusted to master torcedores (cigar rollers).

Perfecto – another double taper format, these cigars typically are at their widest in the center and taper equally to both the head and the foot. It’s interesting to note that many years ago, most cigars were rolled in this style. Perfecto means perfect. I bet you even guessed that one! 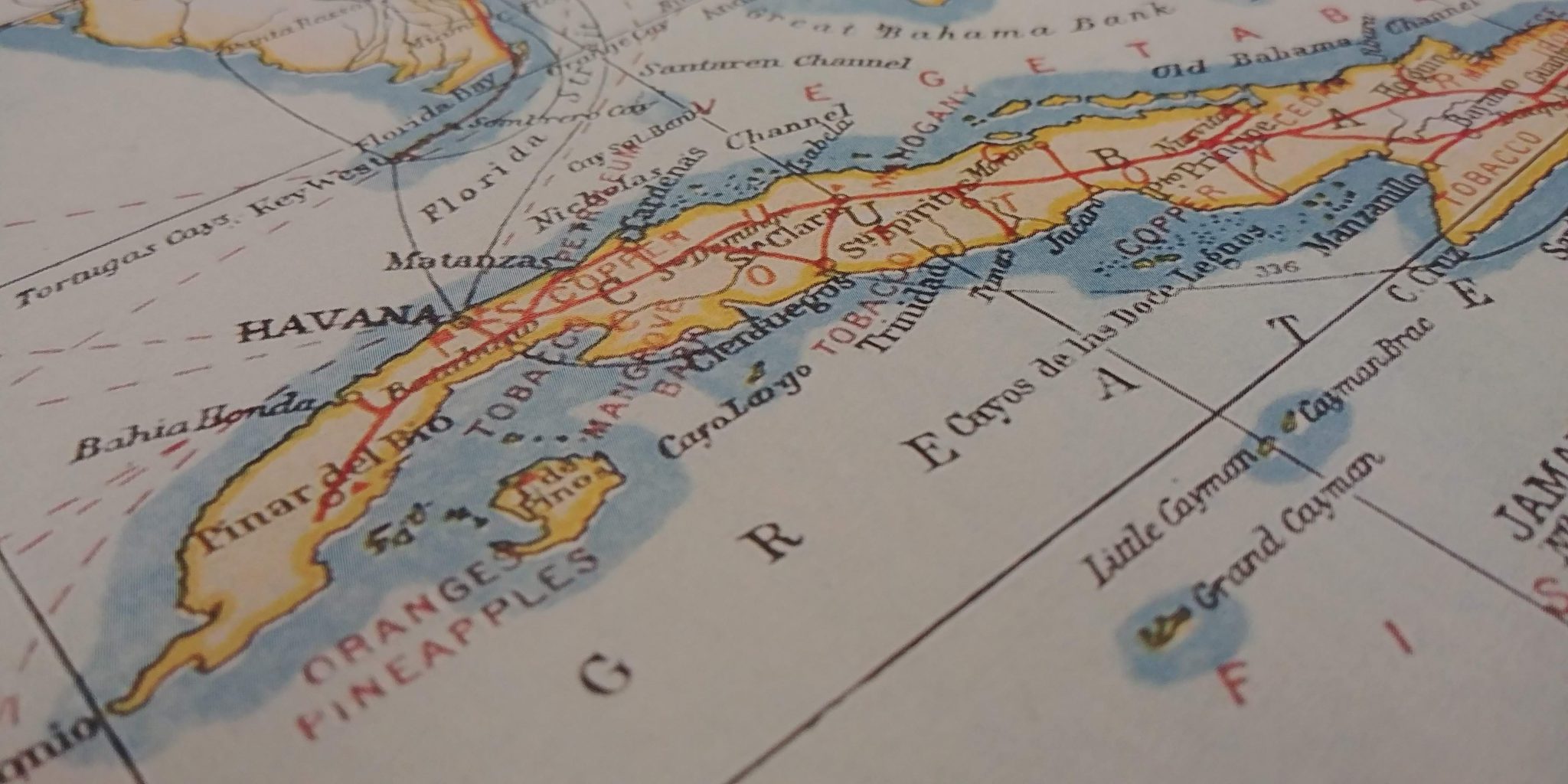 This isn’t the former heavy-weight pepper that went on to be dethroned by the Carolina Reaper. Habano (or generically, Cuban-seed) is one of the most common buzz words in the cigar industry. Often mistaken for a tobacco varietal itself, any leaf can be given a Habano postfix – as it’s more accurately defined as a leaf that’s grown from a Cuban seed. This means that the seed is of Cuban origin, and then grown in another region such as Nicaragua, Honduras, Ecuador, etc. You can see this listed as Habano or even Havano. Additionally, when blenders want to remain secretive about their recipes, they may just opt to use it as the name of the wrapper instead of identifying the exact varietal.

Some packaging, especially common with Cuban cigar brands, provides Spanish terminology instead of English when referencing the tobacco components of a blend. While rarer, you will see this formatting occasionally used in American market blends.

Even if you’re not good at remembering the definitions of words in a foreign language, this one usually comes in threes as a package, so if you remember that cigars have three primary components (Wrapper, Binder and Filler), these terms should stick out like a sore thumb.

In the case of the below example, the wrapper is an Ecuador Connecticut, the binder is Nicaragua Broadleaf, and the filler would consist of Nicaragua Ligero:

It might sound like an artsy-fartsy instrument at first glance, but there’s a less resonant truth to this one. Earlier I mentioned that there are two main categories of cigars; Parejo and Figurado. Within them are subcategories called vitolas. You more commonly know them as sizes. Corona, Robusto, Toro, Churchill, and Gordo are all common examples of these sizes, but it can be tricky as there is no sizing standardization in the industry. What one company calls a Robusto may be 5″ x 50, whereas another will give that name to a 4″ x 54 cigar. 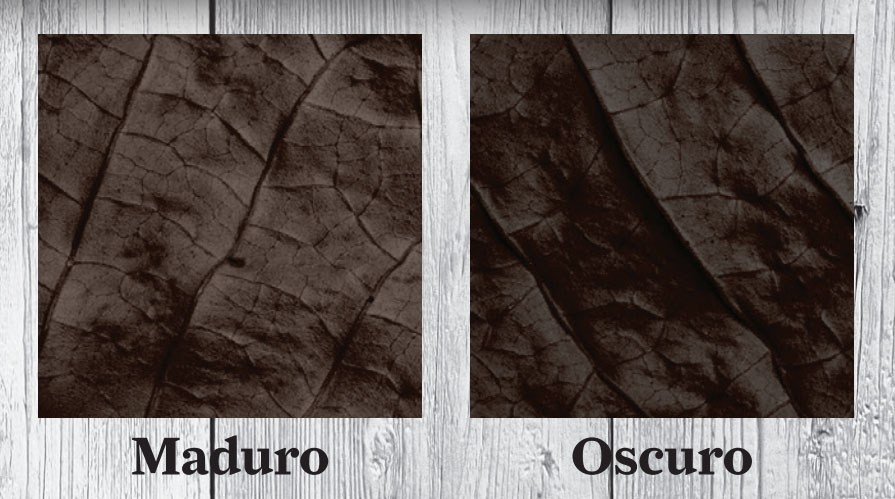 Two of the most misunderstood cigar terms, Maduro and Oscuro are a reference to the color of a leaf and are not actual tobacco varietals themselves. Maduro is a state or color that leaves attain through fermentation, and Oscuro is often used interchangeably with Maduro even though the two have stark differences. The fermentation process for Oscuro wrappers is much longer than Maduro and can last several years. 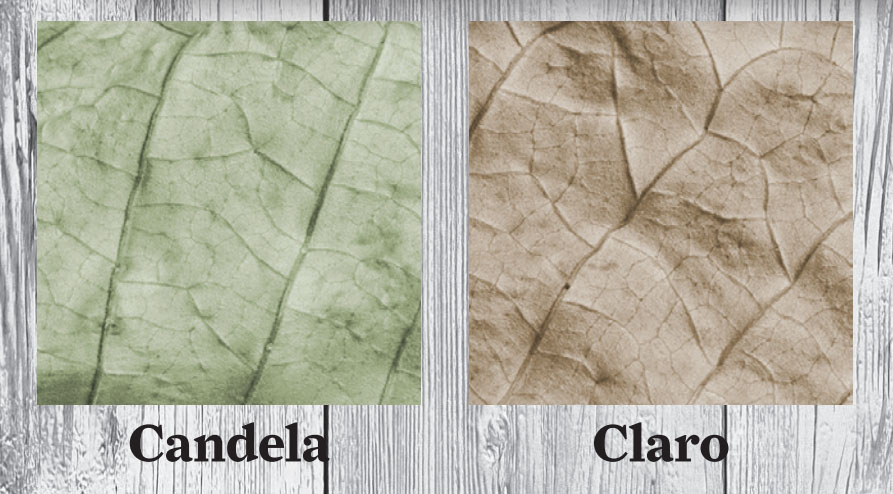 Candela and Claro are often used interchangeably to signify a green-hued wrapper on a cigar. Instead of the traditional air-curing that most tobacco goes through, leaves set aside for this purpose are flash-cured to preserve the chlorophyll that you identify as their trademark leafy color. This used to be done by candle light, hence the name. Candela is a more accurate representation than Claro, in my opinion, because of the confusion it can cause. Some cigars are listed as Claro or Colorado Claro because of their light tan color. Just remember to note that Claro doesn’t always mean green.

As you peruse the web for cigar deals, you may note that some cigars are listed as puros. A puro means that all the tobacco in the blend comes from one specific country. An older school of thought used to define them as cigars with tobaccos (capa, capote and tripa) sourced from a particular country, as well as being manufactured in that country, too. In years since, the criteria have laxed and now an all-Nicaraguan blend that’s rolled in Honduras, for example, is considered a puro.

Nope, this isn’t the late-night drive-thru favorite that cures those… uh… hangovers… Not to be confused with the typically 6″ x 60 size called Gordo, Gorda is often a secondary name attached to the end of a vitola. You may have seen Corona Gorda or maybe Corona Larga (larga means long) listed on a box or bundle in a store or online. Gorda cigars have a slightly girthier ring gauge (usually to the tune of 46 or 48 above the standard 44) than a standard Corona, whereas Larga is used to let you know that it’s atypically longer. 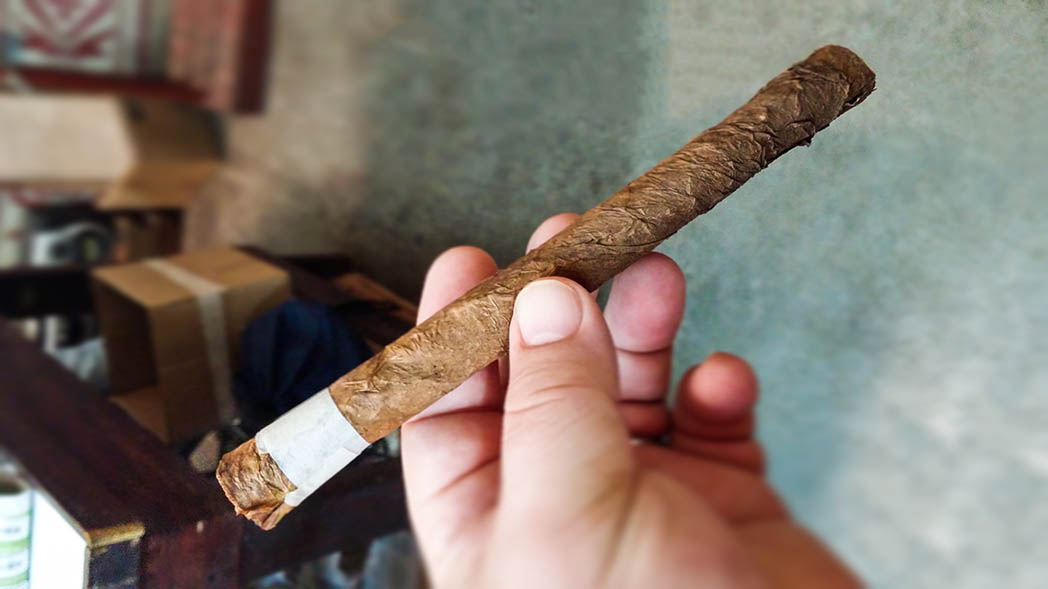 It might sound like a cheap-o rip-off of a popular sneaker, but fuma is a common term in our industry. One definition of a fuma is a manufacturer’s quality control team that smokes and tests tobacco components of a cigar to see what changes are needed for a blend. As growing conditions fluctuate from year to year, the recipes of the blends must occasionally be tweaked to keep flavors consistent. These testers will smoke the wrapper, binder, and filler components separately to ensure that the box of cigars you bought two years ago is equal to the box you’re buying today.

Alternatively, fumas can be defined as short or mixed-filler cigars that are made from the leftovers of a specific blend’s run. Rocky Patel has a number of these available – they’re sold at a considerably lower rate as a budget option for thrifty enthusiasts, so that they can get a glimpse of a top-shelf cigar’s flavor for much less.

English translation: Made by Hand 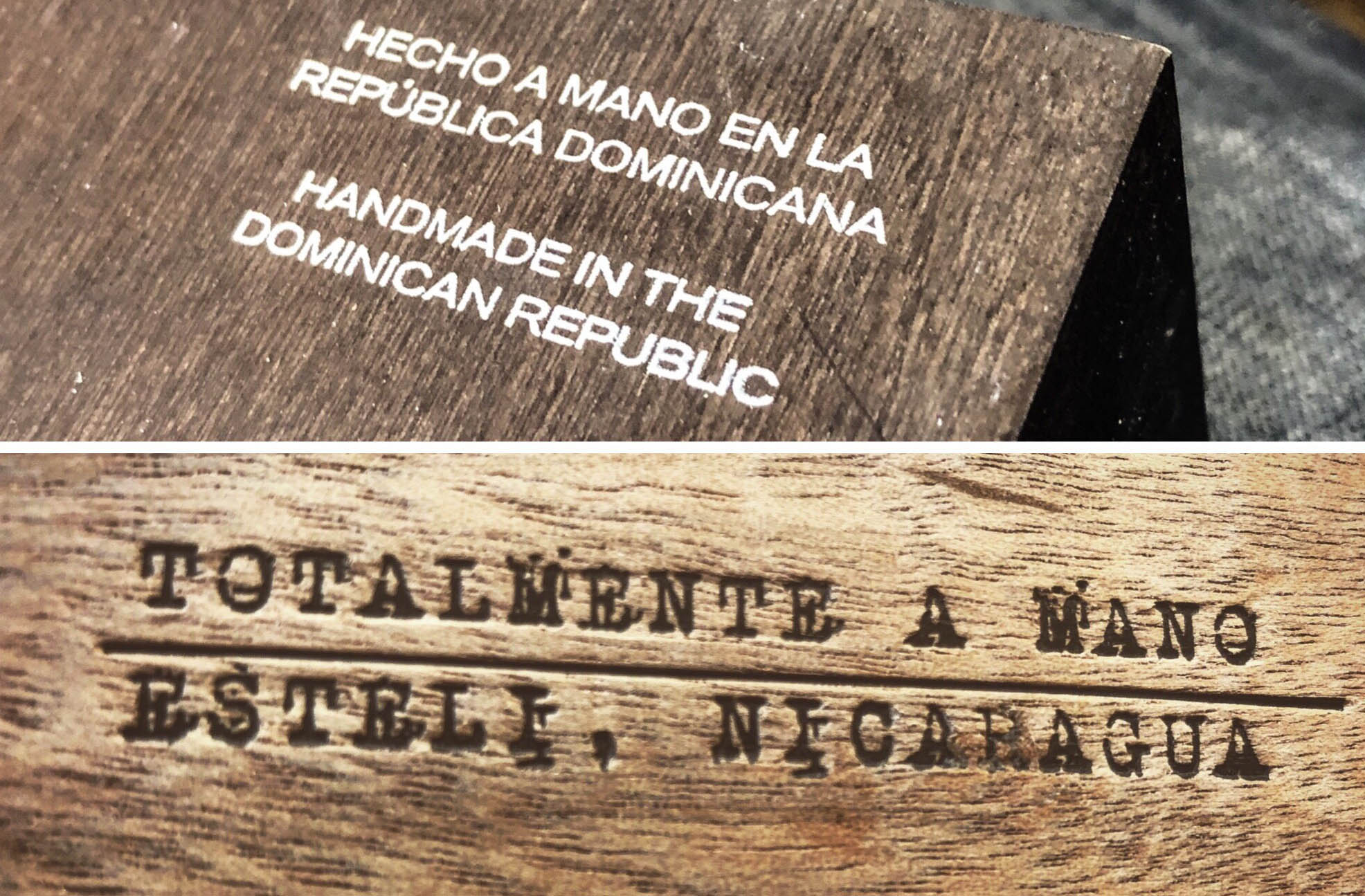 If you’ve ever seen Hecho a Mano printed on a cigar box, it’s to let you know that the cigar was made by hand. While some manufacturers employ machines to assist with filler bunching, the rolling is done by hand and the cigars can still carry that claim. Even rarer, Totalmente a Mano may be listed on your box, especially if the cigars are authentic Cubans, to inform you that no machines assisted the process and every step was done entirely by hand. 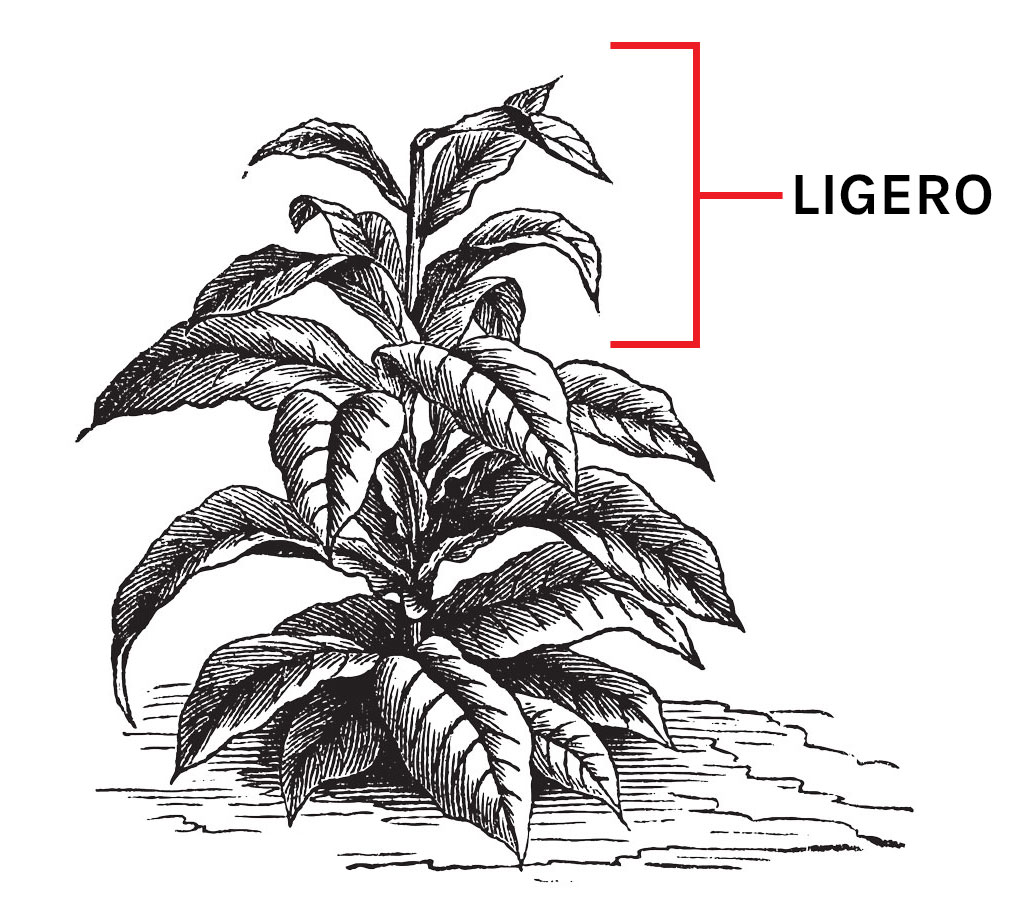 Probably the most ironically-named thing in tobacco, Ligero’s definition as “subtle” refers more to the smaller size of these leaves…because their flavor profile is not nearly as delicate or as subdued as the name implies. Cigar leaves are culled from the tobacco plant in primings. And the upper five rows or so of leaves, called Ligero, receive the most amount of sunlight – resulting in a leaf that’s stronger (both physically and with nicotine strength) and more flavorful when it burns. Ligero’s smaller size means it’s often relegated for use as a filler tobacco – so if you see this tobacco listed in the blend, especially when it’s specifically called out, it’s safe to assume that you’re looking at a bolder smoke, but it’s not always the case. Ligero is used in more mellow blends, too, but either less of it, or Ligero is used from a milder varietal.

What other Spanish cigar terms are still a question mark for you? Was there anything that should have made this list? Let me know in the comments below!

Not so long ago there was a vitola called rothschild. What happened to it?

I’ve wondered that myself. I don’t recall reading about the Robusto defeating it in a “get out of town” match. But I’m thinking Punch still makes a few Rothschilds. I still can recall when the Punch Double Maduro Rothschild was my go-to smoke, at least when I didn’t feel like spending a longer time with a cigar.

Rothschilds still exist; they’re just not as common as Robustos.

Good morning. That was an very informative article. I’ve been smoking for 4 yrs and I constantly learn something new when I read your articles. Thank you very much

Really helpful, even after many years of smoking many cigars and types. But I’m not clear on “vitola”: It mean cigar band but you talk of sizes. A band doesn’t necessarily indicate size (e.g., like ring gauge ). Can you please clarify?

There are times when the translation doesn’t exactly fit the term, like Ligero for instance. Sometimes the meaning is loose, or even relatively unrelated. In this case, cigar bands have to be fitted to match the ring gauge, so I would imagine this is part of the genesis of the meaning. Even 50 years ago, there were far fewer sizes than available today, so some of that is just carryover. Another translation for Vitola is an opinion or image of a person or thing, so that might come into play as well. Great question, and thanks for the read and I’m glad it helped!

As a young boy I traveled to Cuba in 1945. During the trip we visited a cigar factory and witnessed the rollers and a guy reading the days newspaper to them. Every roller had a dish that they would spit into to get fluid to bind the tobacco. I wonder if they still do the same thing.

I never saw anyone use spit to moisten tobacco, but I have seen them use bottled water that they were currently drinking from in other factories.

Two things. 1) the months and years they spend in the aging rooms will have long killed any viruses. 2) COVID has surely put an end to that with cleanliness being a priority now.

Reading Time: 5 minutes The Mi Querida Triqui Traca 552 is the centerpiece of this #nowsmoking cigar review with CigarAdvisor.com’s Gary Korb and Jared Gulick. Allegedly, Dunbarton Tobacco’s “boldest cigar” to date, see if our advisors agreed with that testimony.