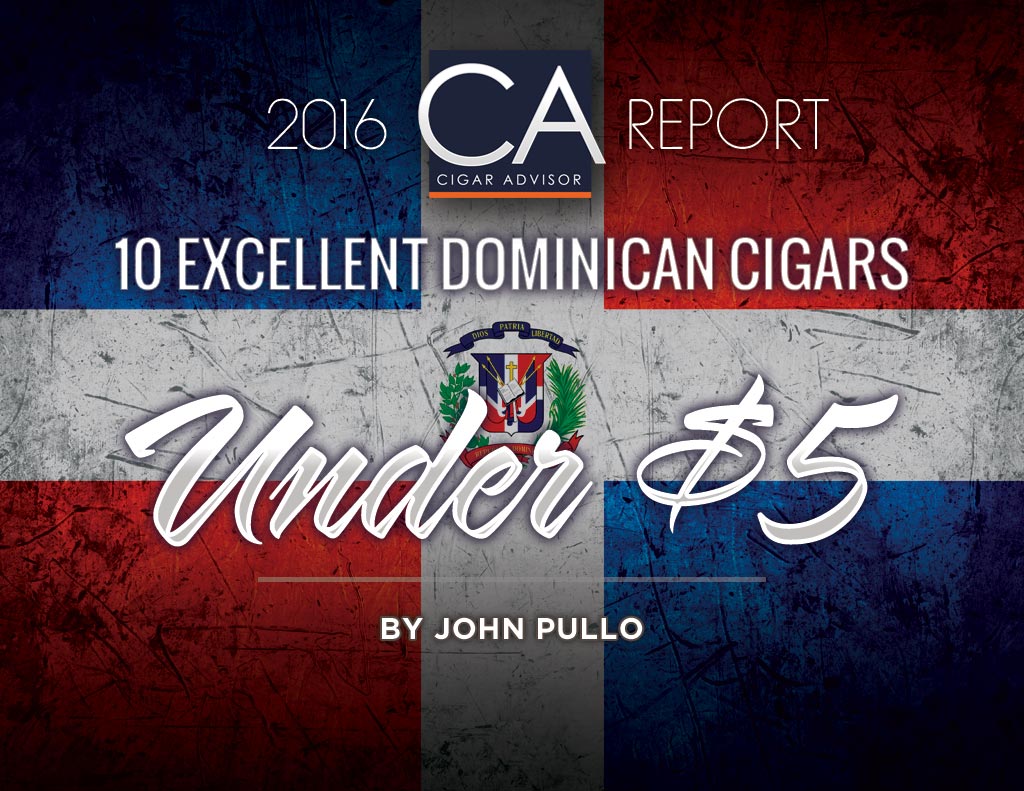 Whoever it was that coined the phrase, “good cigars ain’t cheap and cheap cigars ain’t good” hasn’t been perusing the Dominican cigar aisle of the cigar shop: there are a trove of high quality premiums streaming out of the Dominican Republic, and many for well under the limit if your budget is capped at 5 bucks per stick.

Price can be a sticky point. Yes, we’ve all smoked expensive cigars that didn’t live up to the billing (let alone the price tag), and that is unfortunate; and when we speak of cost in today’s FDA and tobacco tax-heavy age, a $5 price point might immediately make you think this list is only small cigars, or just bundles of seconds. Or no-name brands from never-heard of factories. I’m here to break the good news: while a few are smaller in stature, most are not – and all are premium box brand cigars, from the top tabacaleras you know. It just goes to show you that you don’t have to tread way off the reservation to find a good Dominican cigar at a more than fair price, as each of these picks factors to be an incredible value.

It’s also worth noting that “Dominican flavor” is no longer limited to only smooth and creamy smokes. It may have been the basis on which the Dominican made its name, but the canvas is now broader – as is the range of flavors the blenders are able to create with their cigars. With that in mind, here are 10 Dominican cigars that will help you spend more quality time – not more money.

Ed. Note: Famous Smoke Shop prices listed are current as of Sept. 30, 2016 and are subject to change.

Wait, what? A limited edition cigar, for under $5? Tis true, friends. The La Aurora 110th Anniversary Corojo was introduced in 2013, part of their grand fiesta to mark 110 years in business. But as the party is now over, the folks at La Aurora must move on and get back to work making great cigars. This one is no exception: Dominican and Nicaraguan long fillers are mated with a rare Piloto Cubano (Dominican-grown Cuban-seed) hybrid, wrapped in a feisty Corojo cultivated in Ecuador, and assembled at the Dominican’s oldest cigar factory. Hovering around the 4 dollar mark, this one is nothing short of a steal. ($80.99 – box of 25)

Often mild, you may think all Connecticut-wrapper cigars are created equal; Ernesto Perez Carrillo’s golden touch proves otherwise. That’s because EPC’s heavy blending hand adds a dash of Nicaraguan tobacco to the long filler mix, creating a stick that smokes with a slight spice. The New Wave Connecticut stays true to its Dominican roots, however, as the creamy smoke rolls off the tongue and leaves a nutty, sweet finish behind. If you’re in search of a Dominican cigar with some significant body to it, the New Wave Connecticut does it – without sending your cigar budget up in smoke. ($87.99 – box of 20)

Formerly a Cuban brand, Cuesta Rey was the official cigar of Spain’s King Alfonso XIII. Seems the good king must have known a solid value when he saw one, because you don’t need a royal war chest to afford them. Now made in the DR for the JC Newman family, this Cuesta Rey Centenario Robusto #7 boasts a long filler combo that’s thick with top grade, aged Brazilian and Cuban-seed tobacco (the latter grown by Fuente in the DR, btw), and clad in a Connecticut Broadleaf Maduro wrapper that was grown in full sun. The bonus: Centenario is aged in a cedar-lined humidor for an additional 120 days to reach peak flavor. Makes a great starter Maduro cigar, too. ($46.99 – box of 10)

Since a $5 cap puts the delicious Hemingway series out of reach, it’s still very much worth your time to investigate the many sub-fiver Fuente options that remain. Chock full of Fuente’s home-grown tobaccos (cultivated on the family estate), the Fuente core line is legendary for 3 key qualities: the flavor is very polished, the body is generally mild-medium, and how the rich aroma pours from its authentic Cameroon wrapper. This is a Dominican cigar that’s as traditional as it gets, right down to this classic Cuban Corona size. ($109.99 – box of 25)

The H. Upmann Vintage Belicoso is not all-Dominican – but given its reputation as a slow, steady and smooth smoke, it’s Dominican enough to warrant a look-see. Tobaccos from Nicaragua and Peru are used to round out the blend, and like many DR-bred legends before it, Upmann Vintage utilizes a top-grade genuine Cameroon wrapper to deliver a tasty finishing touch. Still under the 5-dollar limit, it’s more hardy than traditional Upmann fare – and the cedar wrapping around the stick imparts an old-school, aged taste to the smoke. ($112.99 – box of 25)

Behold: a bona fide, under-$5 60-ring in a box…and from a name you know. That is Cru Royale. To discuss blending without paying tribute to the great Benji Menendez would be like talking baseball without tipping the cap to Babe Ruth. Benji has spent over 60 years in the cigar biz, and among the Dominican cigar treats he’s made (there are many, and not all of them Dominican) was this home run for Macanudo. Starting with a base of Dominican viso, he added layers of Nicaraguan and Mata Fina long fillers for depth and complexity; the binder is a Dominican La Vega Especiale exclusive to the General Cigar tobacco stock, the wrapper is a hearty Habano. This is not the old school Macanudo to which you’ve become accustomed – instead it’s a top medium-bodied Rothschild pick that heaps full flavors on the palate from beginning to end.  ($105.99 – box of 24)

Manuel Quesada’s blending skills are known far and wide – and as he’s responsible for a number of highly-rated boutique and luxury premiums, he’s also the prime mover behind bringing this kind of quality to his everyday <$5 smokes. Suffice it to say that good stuff pours out of the doors of his Dominican factory (MATASA) on a daily basis, and Olor is to be included in this conversation: it’s a tried-and-true recipe that predates the Cigar Boom, and keeps on ticking. Expect the taste of smooth and mellow Dominican tobaccos, with a touch of creaminess thanks to a superb Connecticut shade wrapper. And in this larger Churchill shape, there’s a little more of it to love. ($63.99 – box of 20)

A bit of tweaking has occurred here it seems, as this is not the Cusano of old. Gone are the exotic and rare vintage filler leaves from the Paired Maduro. In their place are straightforward Dominican long filler tobaccos, bound in Ecuadorian Connecticut, and wrapped in a Negro San Andres from Mexico. That’s all good in my book, as it allows Davidoff to accomplish 2 things: create a naturally sweet Dominican Maduro that emphasizes the Dominican flavors, and keep it affordable. Medium in body, the Cusano is another one on my personal top 5 Maduro list; the under-$5 price tag is gravy. ($71.99 – box of 16)

What, didn’t think you could touch Nat Sherman for under 5 bucks? And a toro, no less…this is all good news for those of us on the hunt for a great, low-dough Dominican cigar. Though it’s leaning mild, the Metropolitan Connecticut showcases notes of cedar, cream and a nutty sweetness by virtue of a Dominican filler-binder combo that’s thick with Cuban-seed leaf. The smoke output is ample, and the Metropolitan burns with consistency from start to finish. You may think you’ve smoked your way through all that the mild cigar world has to offer; if this Nat Sherman hasn’t been scratched off your list, it’s probably time to see what you’ve missed. ($88.99 – box of 18)

Not your average Dominican cigar, Partagas 1845 is just one example of how the country’s crop can be much more diverse than “mild ‘n mellow.” There’s excellent ligero coming from the fields in the DR; Partagas is using it to great effect in this hearty gumbo, matching it with a spicy Nicaraguan seco and CT Broadleaf binder, then wrapping it all up inside a Habano leaf grown in Ecuador. Partagas 1845 shows how well Dominican tobacco plays with others – deeper earth and naturally sweet tobacco flavors are present, and complexity abounds in this almost-full bodied oversized toro. ($94.09 – box of 20)

A good Dominican cigar does not demand austerity measures on your cigar budget; try any of these 10, and I think you’ll be pleasantly surprised at how far your dollar can take you. If you’ve had ‘em, let me know your thoughts – if you have others to suggest, help your fellow readers and recommend them in the comments below.

Reading Time: 4 minutes New to You: a sampling of the Top New Limited Edition cigars to hit our humidors…and with so many new cigars being added just about every day, we’ve put them all in one place – Click to view our list of Top New Cigars!