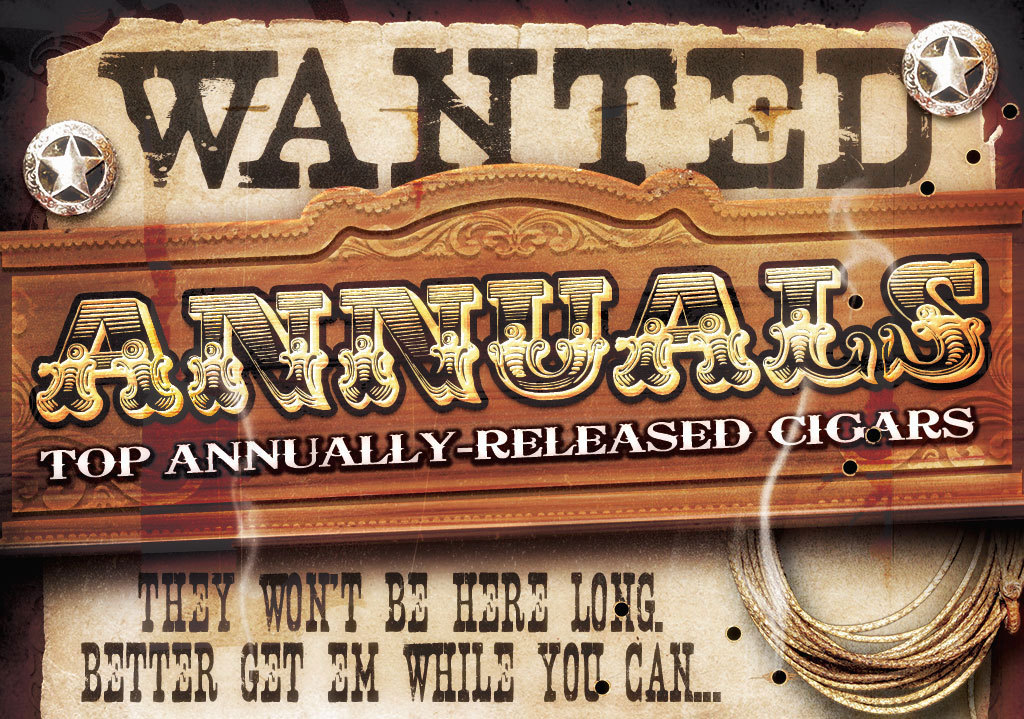 A beer doesn’t have to be difficult to acquire, but damned if that doesn’t make everything taste better.

Same for cigars. Sure, the “core blends” have their pros…available (usually) far and wide, predicated on consistency, they’re always there for you. But there’s something to be said for limited run cigars: they aren’t here long, and are hard to get your hands on – but boy, are they worth it when you land yourself some. So, with some tasty special editions on humidor shelves now, and some upcoming yearly release cigars ready to land – I’ve compiled my top 10 list of LE cigars that are a must try. They go fast, so be sure to get yourself an early spot in line.

Ed. Note: Because of their rarity, some of the limited annual releases sell out quickly; some may be available for preorder or backorder. If you see something that’s currently unavailable, check back in the event that we got our hands on more. Or give our retail store a call regarding availability: (610) 559-8800 Ext. 3.

One of my favorite “boutique” companies, Crowned Heads knocks out hits like Larry Holmes. Las Calaveras has been making yearly appearances since 2014; the initial launch turned out to be so popular that it served as the inspiration for the 90+rated La Imperiosa. The Las Calaveras 2017 was produced in the My Father factory, with Nicaraguan long fillers and binder wrapped in an Ecuadorian Habano Maduro wrapper.

Arguably, the most talked-about LE cigars – and one of the biggest annual releases. Tatuaje Monsters have been kicking since 2008, with these spooky smokes taking their names from famous horror figures from film, literature, and pop-culture. Every October, Tatuaje ships out 666 numbered boxes to the ‘Unlucky 13’, a collective list of 13 retailers who will receive 31 dress-boxes of the limited-run cigar. While the blends vary per Monster, previous lines have come in little, skinny, and pudgy vitolas and have been named after various monsters such as Michael Myers, Frankenstein, The Mummy, Dracula, Freddy Kruger, Jason Voorhees…you get the idea.

From one of the hottest boutiques out there comes Santa Muerte, inspired by the Day of the Dead – and released to the general public on that day (Nov. 1st). Spectacular artwork speaks to the classic skull styles of Mexican artists. “The Santa Muerte is a lighter offering from Black Label Trading Company…but don’t think that means it is light on flavor,” says Alex Kraft of Boutiques Unified. Black Label Trading’s Santa Muerte exhibits woody and spicy flavors, thanks to an oily Ecuadorian Habano wrapper, matched with a complex blend that includes Nicaraguan, Dominican, Mexican San Andreas and Connecticut Broadleaf tobaccos.

If you’re looking for the crème de la crème of LE cigars, you’ve hit the jackpot if you find yourself some of these. Davidoff debuted the elegant Chinese Zodiac limited edition series in 2013 with the Year of the Snake, and have since gained a cult following of high-end smokers who search high and low for these rare cigars. The Year of the Rooster (2017) was a medium-bodied smoke brimming with creamy and luxurious flavors in a 6 ¾ x 50 Diadema; but keep your eye out for next year’s Year of the Dog Churchill, which will feature select San Vicente ligero and filler from Esteli bunched in a Dominican San Vicente binder and an Ecuadorian Habano claro wrapper. The boxes always feature red and gold colors, representing wealth and good luck in China; there will only be 4,500 boxes of 10 released this year.

When I say these are rare, I mean finding these LE cigars is about as hard as finding Waldo in a candy cane factory. While connoisseurs know full-well why this cigar was No. 1 cigar for 2016, the factory workers at LFD had no clue; so when the announcement came that this was the top cigar of the year, demand soared sky-high. Only problem was that the factory workers had gone home for a 3-month holiday sabbatical, further driving the scarcity of these full-bodied smokes. Andalusian Bull measures out as a 6 ½ x 64 Torpedo, with a combo of Dominican 98 Criollo and Pelo d’Oro filler wrapped in a silky Cuban-seed Ecuadorian Corojo wrapper. Full of savory notes such as hickory, leather, and spices- this cigar is a must-try.

Another one of the most anticipated yearly releases, Quesada’s Oktoberfest is down-right delicious. Reasonably priced, too – especially for LE cigars. These premiums are meant for pairing with the styles of beers served at Oktoberfest. This yearly release of has been a tradition since 2011 with the launch of the Über, a 6 x 65 gordo extra; this year, Quesada made six vitolas, each using Dominican tobacco exclsuively. Grab some sauerkraut and sausage, and hoist ‘em high. Prost!

Possibly the longest running yearly release cigar on the market, Camacho has been churning out this patriotic premium pick since 2002. While supplies of Camacho Liberty have been a sparse 2,000 boxes a year, 2017 gave smokers a chance – adding 500 boxes to the fray. And yes, every year’s blend is different: 2017 saw more Nicaraguan kick with the addition of Corojo 99 in the filler alongside Dominican Piloto Cubano.

St. Patty’s Day has always had its own cottage industry of green beer, ‘Kiss Me I’m Irish’ t-shirts and yes, green cigars. But then Alec Bradley launched the Filthy Hooligan in 2013 – and Saint Patrick’s Day was never the same. The original blend featured a candela wrapper; more recent versions sported a Nicaraguan Jalapa and Candela barber pole. These sticks come in limited supply of 2,000 boxes, each a modified twist on the Black Market box.

If we’re talking heritage, then we must talk Punch – who has been churning out the Rare Corojo every February since 2001. The consistent combination of brick-red Ecuadorian Sumatra wrapper, hearty Connecticut broadleaf binder, and Dominican, Nicaraguan, and Honduran filler tobaccos have been the thing of cigar smokers’ dreams for over 16 years. And where most cigar companies tweak the blend yearly, Punch differs by adding a new size or shape each year. 2017 brought us the En Crystale, a hearty 5 ½ x 54 Robusto; let’s see what next year has in store for us.

Envisioned as a trilogy of special cigar releases, CAO Amazon Basin are LE cigars that feature Braganca filler, an indigenous Brazilian tobacco that’s in such short supply, it’s harvested once every three years. Once picked, the tobaccos undergo a special fermentation process before being hand carried through the forest and canoed to the factory. The first edition met rave reviews; and while the newer Fuma Em Corda and Anaconda editions have been similarly well-received, the fact remains that there’s only so much Braganca to go around…so stock up!

I found one you didn’t list but I love it, the Camacho Master Built series, the bourbon barrel finished! omg! What a great cigar and a limited run series. Wish I could afford a box.

Loved the Ditka Throwback, but found subsequent releases to be so so. Really enjoyed the CAO Fuma Em Corda, more so in robusto than the toro. Toro might need a little more time and then I’ll see.
Found the 2017 version of Las Calaveras not to be as refined as the 2016. Bought a 5 pack of each the robusto and toro. I’ll let them age a little before trying again.
My son thinks he has a 2015 version in his humidor and I told him maybe we can work out a trade. Maybe a rack of smoked baby backs? Just a thought