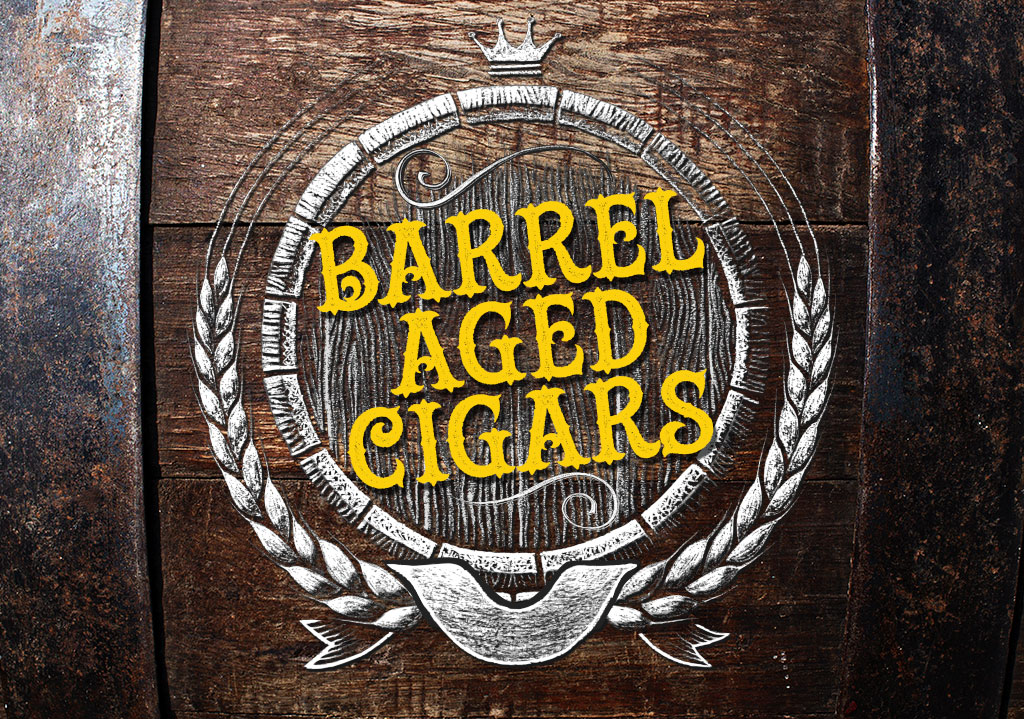 5 of My Favorite Barrel Aged Cigars

Cigar making, just like any other industry, experiences its trends. Recently big ring gauges became all the rage. American grown tobaccos and fire cured leaf have become sought after. Then there’s Barrel Aged cigars, which have actually been around for quite some time – but they’re recently becoming the “in” thing and making quite a stir.

So what exactly is a barrel aged cigar? Well, it’s pretty much what it sounds like. Plain oak barrels or whiskey and beer barrels are used, as either tobacco leaf or completely finished rolled cigars are placed in the barrels and aged for a certain period of time which totally varies by the cigar.

I’ve got five Barrel Aged beauties that I personally love and I figured I’d tell you a little bit about them. They’re all very different from one another, and in my most humble opinion, they’re all worth a try.

This cigar is making a hell of a name for itself since its introduction early in the summer. While Camacho makes outstanding premiums (with the Triple Maduro being a longtime fave), their new Barrel Aged cigars now take the crown as my favorite in the line. Handcrafted with US grown tobaccos and a corojo filler that’s been aged for six years gives it some real pop. Then the dark and oily Connecticut Broadleaf wrapper turns it up a bunch of notches as the leaf is aged in charred Kentucky bourbon barrels for 5 months. While it’s full bodied and bold like Camachos are known to be, this one renders a smooth and oh-so-tasty natural sweetness from that gorgeous wrapper. If you love ‘em full flavored, then this is the one you have got to try.

Now here’s an incredibly unique stick from Asylum in conjunction with New Holland Brewery that took me by surprise. To set the record straight, Dragon’s Milk is not a flavored cigar; it is more in the line of an infused cigar, but in no way is it overpowering with added flavors – so let me do some explaining. The cigar is made with all choice aged Nicaraguan tobaccos. The finished rolled cigars are then lowered into barrels that once held Dragon’s Milk Stout, which before that housed aging bourbon. After much experimentation, the perfect amount of time in the barrels is two full days for the cigars to absorb just the right amount of flavor and aroma. And that’s the beauty of it all as the cigar possesses an intoxicating scent with a wonderful hint of that stout on the palate. As I said, it’s just the right amount of flavor to make this an amazing and unique cigar smoking experience. It’s made in very limited production but so much worth a try.

While Nick Perdomo introduces one delicious cigar after another, the man in Miami knocked it clear over the center field wall with this one. So he starts with the highest grade Nicaraguan fillers and Sun Grown outer wrapper leaf… but then he goes a tad over the edge. The tobacco is aged in bales for ten years, that’s what I said, ten full years. But as they say in the infomercials, “but wait, there’s more”! The leaf is then place in charred oak barrels that were used for aging bourbon, for an additional two more years. The results are true long-term barrel aged cigars with smooth and extraordinary flavor, aroma and color. This one falls between medium and full bodied and as you might imagine, gives off an oakiness that is derived from the barrels they are aged in. Seriously cigar lovers… it’s time to go for it!

This, my friends, is a premium hand rolled cigar that displays some serious “wow” factor. The filler and binder is the same exact blend shared by the immortal Opus X. You see, when a hurricane ripped thru the Chateau Fuente farms in 1998 where Opus X wrapper leaf was grown…well, there was no more Opus X wrapper leaf. So, turning tragedy into triumph, the Fuente’s chose a magnificent, five-year aged Connecticut Broadleaf maduro leaf aged in cognac barrels to surround the Opus blend, and guys, the rest is sweet history. While it is truly a full bodied beast, it’s also as smooth as silk with notes of dark chocolate and black cherry. This is a sublime smoking experience and you’ll want to try it at least once in your life… or maybe a thousand times!

The Partagas name has been synonymous with outstanding premium cigars for over a century and a half. And while many may have a certain opinion of this established icon of the industry, a new blend has arisen and people are talking because the complexity of flavors is simply off the charts. The filler tobaccos, hailing from Nicaragua, Honduras and the Dominican Republic are aged in rum barrels, giving them a distinct yet subtle sweetness. And the wrapper, a wickedly dark and oily Connecticut Habano Oscuro leaf, gives this stick some serious full bodied flavor without being too strong. If you love a full flavored maduro, then this is your next tobacco candidate.

That’s it, people… five awesome sticks that’ll surely have your taste buds over a barrel. Let us know in the comments below which ones you’ve tried or maybe some other barrel aged cigars and tobaccos we didn’t mention.

Tommy I’ve smoked all the cigars in your article many times and I’m probably going to have to agree with you but I think that the Fuente Anjeo is the best that’s why is was picked for #77 my cigar. But the Dragon’s Milk is excellent anytime. Partagas is extremely consistent. The Perdomo Gordo stout from their craft series is a winner and General’s Camacho barrel aged is quite good but the Perdomo 12 yrs is exquisite!

I have smoked the Fuente Anjeo and I loved it but then again I’M a Arturo Fuente man. Now after reading your review I have to try the others you’ve mentioned. Thanks

You’re the man Zman,see you if you will still be on at 09:30 tonight

One down. Four more to try out.

I have had the Asylum Dragons Milk and the Partagas 1845 Extra Oscuro and have more of them in my Humidors. They are excellent. Wanting to try the Camacho as I already love the Tripple Maduro.

And no mention of Drew Estates Pappy Van Winkle Reserve? Your list, gentlemen, while remarkable, needs one addition.

Availability of the Camacho ABA has been problematic until this week…seems like they have suddenly become available across the board.

I’ve had the Partagas, the Camacho and the Arturo Fuente. All three of them are excellent. I hope to be able to locate some of the “dragon’s milk”. I’m not usually one to purchase infused or flavored cigars, but this one sounds like it would be a keeper. Thanks for a good review.

I am 5 for 5 and think they are all excellent. Have a few of each in my humi’s.

The AF Anejo is an absolute joy! The Partagas Oscuro is equally pleasing. I’ll have to try the others.

I’ve had the Camacho and find it enjoyable. I’m going to have to try the rest in this selection as well. Thanks for the tip.

Nice article Zman…I love the Camacho. I also love that Partagas and didn’t know it was a barrel aged cigar.

Have not had the Perdomo Double Aged 12 Year Vintage Sun Growns.I will now,Good article

Nothing about La Aurora Barrel Aged? That right there is another really good smoke and at a great price!

Do any of these cigars need to be stored separately like some of the flavor infused Acid cigars?

Have you tried the Karl Malone La Aurora 32 Barrel Aged? If so what are your thoughts? Thanks

Hi Wendell,
Not I have not, but I have heard very good things about it so far.
If I get my hands on one, I’ll let you know. G-~