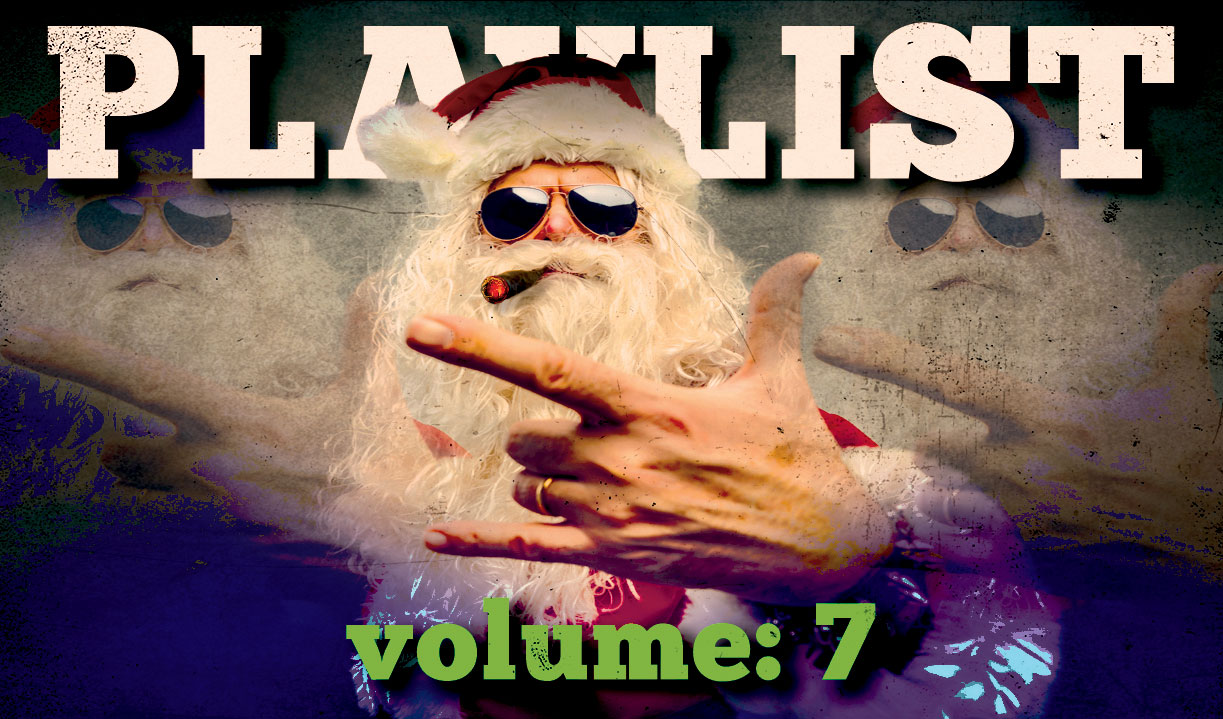 Since this season is a time of giving, we figured we’d spice things up for this month’s Playlist feature. Instead of our traditional pairing a cigar with a song format, we decided to serve up four each of our favorite Christmas tunes.

Now…we know what you’re thinking. “Here comes a bunch of traditional holiday music that I’ve heard on repeat at Walmart for the past 17 weeks.” Nope. We wouldn’t do you dirty like that.

We’ve wandered off the beaten path to offer some of the season’s more obscure performances. If you’re going to be festive, at least now you can go beyond “I’ll Be Home for Christmas” or “Frosty the Snowman.” There’s a range of genres to enjoy – a little something for everyone.

Each of our picks comes with a bit of history as to why it’s in our holiday rotation. And the cherry on top – we’re sharing the cigar we’ll each be smoking this Christmas and why it’s so well-suited to the holiday.

If not, listen along. All the songs are embedded below.

Have a Merry Christmas and smoke ‘em if you got ‘em!

I chose this song frankly because I like the Ramones. It sounds like a lot of their other songs, and it wouldn’t be a Ramones tune without the sophomoric lyrics. Apparently, the couple in the song have had a tumultuous relationship, including several breakups and makeups. Did the girlfriend threaten another breakup on Christmas Eve? Perhaps. And so, the boyfriend pleads for a little peace on earth – at least for one day of the year.

“Don’t Shoot Me Santa” – The Killers

The song’s provocative title isn’t surprising coming from a band called The Killers. The video is played for laughs, but a closer look at the lyrics reveals a much darker tale. No one else around believes me/But the children on the block they tease me/I couldn’t let them off that easy. All that aside, what I like most is the straight-ahead rock n’ roll groove they came up with for this song.

The most Christmassy song of the bunch backed by poignant lyrics, and a soothing mix of rap and melody – a quite catchy one, at that. “Christmas In Harlem” appears to be autobiographical. Kanye, now a rich man, takes a nostalgic look back at when his life was simpler, and a lot poorer. Now he drives a Panamera Porsche and shops at Nieman Marcus, but the message is, don’t forget your roots. Love, family, faith, and the true spirit of Christmas are what really matter.

As one of the most memorable cigars I’ve smoked in recent years, the Plasencia Alma Fuerte Nestor IV Toro is my merry cigar choice for Christmas. Skillfully handcrafted with Plasencia’s most vintage tobaccos – mostly Criollo ’98 – it’s a top-rated Nicaraguan puro that resets the bar for luxury-class cigars. The smoke is vibrant, full-flavored, ultra-creamy, and swarming with complexity. Notes of earth, cinnamon, nutmeg, oak, cocoa, and molasses cascade throughout keeping you fully engaged from end-to-end. Be sure to smoke it after the kids are in bed. You don’t want any interruptions while reveling in this Nicaraguan delicacy.

My dad introduced me to this somewhat abstract cut when I was a young teenager. I loved it then for its simplicity and ambience. As I got older, I loved it more for the story behind the lyrics: We’re all sold a Christmas fairytale when we’re young, only to find the magic we once believed is a ruse. The truth hurts, and Greg Lake gets it.

Somehow, I got through the 80s and 90s without hearing this cult staple – at least that I can recall. My wife played it for me – probably during our first Christmas together – and I absolutely hated it. It seemed so monotonic…but she loved it. And as the years went by, it grew on me for being so earnestly wholesome, innocent, and relatable. The people we love always leave the deepest marks and Christmas wouldn’t ever be the same again without it.

“The Season’s Upon Us” – Dropkick Murphys

Not everything about the holidays is happy or merry, and this track is the anthem for those who dread the annual Christmas reunion. This parodied tour of a guy’s family of dregs and delinquents is both funny, and probably more uncomfortably accurate than most of us would admit. And that Irish folk-turned-punk whatchamacallit…it somehow adds to the season’s vibe. It just puts a smile on my face.

Some funky groove? Check. Albert King’s blues guitar mastery? Double check. Admittedly, this isn’t the most Christmas-y cut out there, but it’s guaranteed to get your foot tapping and head nodding as long as you have a pulse. I mean…who else could get away with a story about Santa needing to get down? Turn this one WAY up.

The Family Rerserve 50 Years is an absolute masterpiece, and given that weighty $25+ price tag, it should be. Padron’s signature coffee and cocoa notes are there, along with sweet spices and a flourish of spice and pepper.

Unless you’re Jeff Bezos, or at least some kind of hedge fund manager, you’re not smoking one of these as your daily. And while I could, given the means, I think some of the magic would be lost to monotony. This Padron was meant to be puffed fleetingly on special occasions, like anniversaries, birthdays, or New Year, and Christmas seems like another fine opportunity to splurge.

If you’re like me, you get caught up in the madness of the season. But as a wise man once said, “sometimes, you need to take care of yourself, too.” Okay, I made that up, but it doesn’t make the notion wrong. So, when the kids are tucked in their beds, and “Santa” has a little time to himself, give a thought to treating yourself with a legendary smoke.

We take a holiday classic and dial it up to 11, as Brian Setzer has spiked the egg nog with huge horns, ripping guitar lines and Red Bull. Scrooges take note: if the punch of a 19-member big band doesn’t get you in the Christmas spirit, nothing will.

One of about 746 bands or artists to record “Jingle Bells” (original title: “One Horse Open Sleigh”), but the only one to put some groove into the song. Steve Cropper’s slinky guitar solo is what makes this your reward for all the not-great Christmas music (looking at you, Springsteen) you’ve been forced to endure since Black Friday. Actually, the whole album is a must if you’re turning up holiday tunes at the cigar lounge.

An homage (or blatant rip-off, your call) of James Brown’s “Poppa’s Got a Brand New Bag.” Either way, this was the tipping point of Christmas music getting wickedly funky. Play this at your Christmas party – I dare you not to move your feet.

This one’s my guilty pleasure. Emmet Otter was my favorite Christmas special, and I still watch it every year. Muppets, great music, and a new take on the Gift of the Magi story that pits Emmet and friends against the heaviest metal band in Frogtown Hollow. Skip White Christmas and watch this instead.

This Davidoff is more than just a Christmas cigar…it’s a smoke steeped in an event of immense historical significance, and another example of how The Late Hour got its name: that time when Winston Churchill invited himself to the White House.

Sir Winston wanted to coordinate British & US war strategy after Japan’s attack on Pearl Harbor; and having waved off Roosevelt’s concern that a trip across the Atlantic (teeming with U-boats) would be too dangerous, the British battleship Duke of York arrived in America on Dec. 22, 1941.

Churchill ended up staying at the White House for three weeks. In addition to celebrating Christmas at the White House, the president and his “eccentric houseguest” enjoyed many late nights drinking brandy and smoking cigars, much to the dismay of the First Lady: “It was astonishing to me that anyone could smoke so much and drink so much and keep perfectly well,” wrote Eleanor Roosevelt.

It was these late-night bonding sessions that forged their legendary friendship – and many say, won the war.

And this is the taste of victory: warm and sweet, with a subtle spicy burn reminding you that a portion of the tobaccos were aged for six months in single malt whisky casks. Coffee, citrus and leather round out a flavor profile that builds to near-full body, making Winston Churchill The Late Hour one of the most complex cigars you’ll smoke all season.

Reading Time: 4 minutes Since this video debuted on St. Patrick’s Day, we asked Gary to review a green cigar. He chose the 5”x52 Illusione 88 Robusto Candela – a Nicaraguan puro made with Aganorsa farm-grown tobaccos. Watch Gary go Green with Illusione in his review!