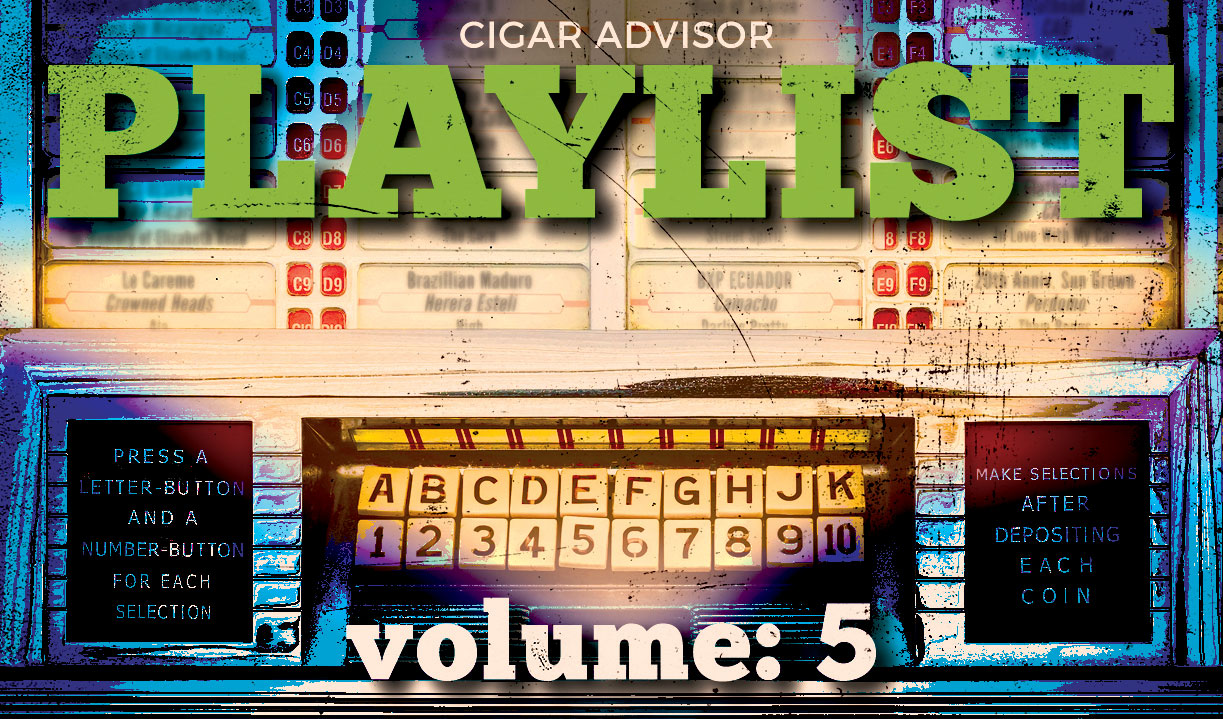 The only thing that’s more diverse than the contents of our collective humidors, are the songs we bob our heads to as we cruise to and from work each day. Whether it’s an antiquated tape deck or cd player, the latest and greatest streaming service, or just plain old DJ-driven radio, almost all of us play something to serve as the soundtrack to our lives. The Cigar Advisor Playlist ups the ante and pairs these songs with our favorite cigars.

In this edition, along with our regular submissions, we’ve added a pick from master blender, Michael Giannini, of Ventura Cigars. He’s an avid music fan, too, so we picked his brain for his favorite pairing.

As always, we remind you that our selections are subjective and may not always be on par with what you prefer. We implore you to send us your picks, and if we love it, we just might feature YOU in an upcoming edition.

How Can You Pair Music with Cigars?

There’s two ways to listen along:

In Volume 5, we are featuring cigars from Ventura Cigars, Hoyo de Monterrey, Aganorsa Leaf, and Crowned Heads. Check ‘em out!

I love that it has a Sumatra wrapper on it with Nicaraguan tobaccos. It reminds me of the days working with Ernesto-Perez Carrillo 20 years ago. He would drop little Christmas gifts of cigars he was working on, and to be able to recreate that this year with him and bring me back to 20 years ago…this just reminds me of that.

What I love about “Eclipse,” it just tugs at your soul because it’s about life. If you listen to the words, it’s about what you create and what you destroy. It’s about things that you shouldn’t do in your life. But I’ve always been a fan of space and when I was a kid we landed on the moon and this year was the 50th anniversary of that. We’re still exploring space and we’re eventually going to Mars. I’d like to go there and grow tobacco because nobody’s ever done that. Every time I listen to the song, it just tugs at my heart.

“I Am the Highway” – Audioslave

A Famous Smoke Shop exclusive, Siboney Reserve is made by Aganorsa Leaf at their TABSA factory in Nicaragua. While most of it entertains at the medium-body mark, the strength will creep up on you slowly. It doesn’t cross the threshold into full territory, but the brawn is there. Its smoke is dense, robust, and is accompanied by wafts of cedar, black pepper, nuts, and a graham cracker-like sweetness on the finish. While I enjoy that it’s both complex and cops a bit of an attitude at times, I love even more the smooth and easy-to-enjoy profile it exhibits throughout. It’s just a simple, balanced ride of flavor to stand as a solid evening puffer.

Many parallels are drawn. The gentle ambience of the song’s introductory swells mirror Siboney’s gradual complexity. Deep lyrics and a bottom end enhanced by baritone guitar sit in sync with the cigar’s strength. “I am the Highway” is an easy listener. It’s perfect for cranking up when out on the road, but it’s the type of tune that will have you digging deeper into the accelerator when you get lost in it. I don’t often smoke in the car, but I could see myself doing it in this case. The song and the cigar are equal parts powerful and smooth, both to my palate – and my ears.

The Hoyo de Tradición Toro has been one of my personal medium-bodied cigar favorites for years thanks to its creamy, sweet, and spicy flavor profile. Released in 2007 as an homage to Hoyo de Monterrey’s Cuban heritage, the Toro is gently box-pressed in a blond, mid-priming Honduran Jamastran Rosado wrapper garnished with a Cuban Hoyo de Monterrey band. (That band is also one of my favorite things about the cigar.)

Looking at the Hoyo’s blend, it may appear to be very spicy. What’s remarkable is how it maintains an even keel throughout offering caramelized flavors of cedar, nutmeg, almonds, sweet tobacco, and an evocative floral aroma. And although this Hoyo is markedly different from its Cuban cousins, it offers a rich, creamy, and thoroughly relaxing smoke that any fine premium cigar, Cuban or otherwise, would envy.

What makes this pairing just about perfect is, both Valdés’s performance and the Hoyo Tradición share a wealth of complexity. However, the result is something equally tranquil and captivating. Pour yourself a Daiquiri, and while you relax to La Comparsa, it’s easy to imagine the sounds, flavors, and aromas that once graced the walls of Havana’s famed El Floridita bar in its heyday.

“Hey Blackberry, how you taste so sweet…”

Boy, does it. To me, a mouthwatering berry sweetness is La Imperiosa’s most noticeable quality: it first shows itself in the pre-light, and never quits. Other flavors – leather, creamy spice, wood – come along to complement it, and its chocolatey aroma…and it only gets more savory from there, pouring on a ton of rich flavor with a sweet, salty finish.

Meaning “the imperative,” it’s pretty much how the Crowned Heads boys felt about the Las Calaveras 2014 LE – it was absolutely necessary that they bring back that My Father-made blend, given the high demand.

This is my favorite cut off the album because it has such a juicy groove…this is the Crowes getting back to their R&B roots (think “Hard to Handle”, which is probably what turned you on to the band in the first place). The vibe is laid back, but when all the parts come together – this tune just oozes a buttery-rich layer of funk that’s just spicy enough.

La Imperiosa drops that same kind of big and bold-feeling profile, especially in this fat n’ juicy size. And just like the sweet groove in “Blackberry”, offers a bit of kick – but never gets out of balance.

Crowned Heads meets the Black Crowes for a smoke that’s sweet and savory all around – and a great way to spend 90 minutes of your time.

He’s no longer with the company.

Read More
Cigar Buying Guides
Too often, veteran smokers steer the cigar noobs toward the bargain bin for their first cigar. We say no: greenhorn smokers can reach the top shelf - besides, shouldn't your first cigar be a celebration in-and-of itself? Get a look at 10 more flavorful, upmarket gems that are right at home in any smoker's humidor.
Read More