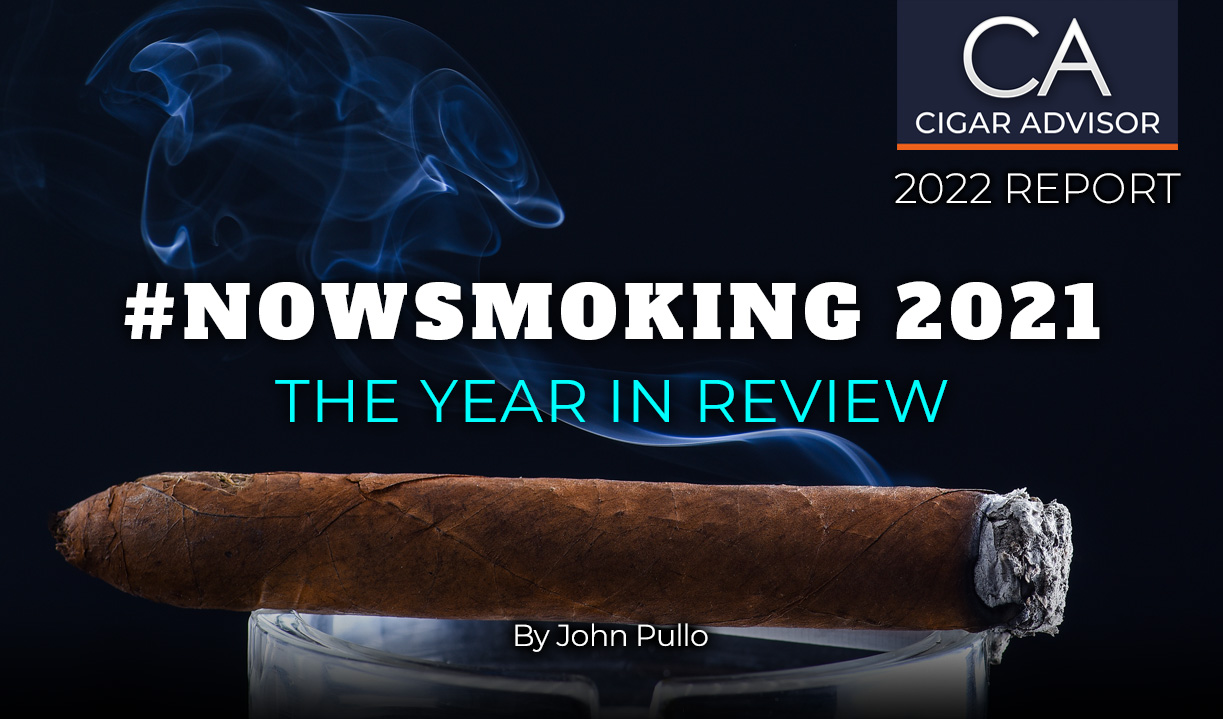 #NowSmoking: The Year in Review

A look back at the best #NowSmoking cigar reviews of 2021


Happy New Year from the Cigar Advisors at Famous Smoke Shop! We’re celebrating another year of great cigars with a recap of the standout smokes from our #nowsmoking cigar review videos. You’ll get some first-hand evidence for how and why so many of these cigars we smoked earned their way onto our 2021 Best Cigars of the Year list, too.

Scroll for our “Year in Review” highlights, and see these new (and classic) cigar picks that are a lock for your must-smoke list this year…

Our rewind begins with a look at 2020’s Cigar of the Year, the E.P. Carrillo Pledge Prequel. Released as a “tribute to cigar lovers everywhere,” Pledge finds its place in the Carrillo Family Series of cigars, next to EPC’s La Historia and Encore. Clearly, Ernesto put a lot into this smoke – including a Connecticut wrapper “that almost defies description.” With a well-rounded serving of woodiness, semi-sweet treats, and peppery spices, Gary said Pledge was Ernesto’s finest opus magnus to date. Watch now, and see if this box-pressed Robusto was worthy of its “98” tasting score…

February found us asking, “How long does it take to bring a premium cigar to market?” If we use Mil Dias as our example, then it can feel like forever. From 2017’s blending sessions at Tabacalera Pichardo, then rolling and aging, banding and boxing these cigars, it took almost 3 years before these Crowned Heads cigars FINALLY arrived. That’s about 1000 days – or in Spanish, ‘Mil Dias’ – and that lengthy process inspired this premium’s name. Shame on us for taking even longer to smoke it: Mil Dias is a four-nation blend cuddled in a shiny Ecuador Habano leaf; Gary had the Robusto-size Edmundo, calling it “well-balanced with a profuse spicy-woodsy complexion.” Good cigars are never rushed…so was this one worth the wait?

Cigar history is a long and storied timeline, but the year 1935 glows brightly: that was the year Alonso Menendez released the first Montecristo cigars in Havana. Now 85 years-plus-1 later, Rafael Nodal, AJ Fernandez, and the Grupo de Maestros attempted to recapture the profile of those original 1935 Cuban Montecristo cigars. The catch, however, was to do it without using Cuban tobacco. After having worked their way through a forest of estate-grown Nicaraguan leaf, the blenders recreated history with a bold, complex smoke with an earthy, nutty, and sweet-spicy character.  It really is, as Gary writes, “A testament to the kind of tobacco growing, fermentation, and aging they can do these days.” Watch our March highlight and see if this throwback smoke will earn its way into your humidor…

April brought us Trinidad’s second Espiritu, a bundle of Brazilian energy and flavor…Rafael Nodal and AJ Fernandez returned to this classic brand, adding a Brazilian filler leaf and a dark, oily Arapiraca wrapper option to the lineup. This fairly complex Robusto had all the goods: earth, wood and spice, along with a peppery finish – which made for a stunning, full-bodied departure from its Nicaraguan puro predecessor. So, did our taste buds form a conga line behind the Espiritu Series No. 2? Watch now and see.

This Spring, Gary burned his way through the Perdomo 10th Anniversary Sun Grown Churchill: creamy, refined, and teeming with flavors of nutmeg, cinnamon, and oak. But was that the profile Nick Perdomo was going for? To be sure, Gary asked him to drop by and tell us. So far, the best we can say is this 10th is similar to the Perdomo 20th Anniversary Sun Grown – except for it being a bit leaner in strength, and a little sweeter in taste. Nick shared some secrets about blending the cigar, a few neat smoking tips, and even a little teaser about Perdomo’s upcoming 30th Anniversary cigar.

Cloaked with dark, oily Connecticut Broadleaf over a blend of aromatic & exotic tobaccos, this extra-plump Corona was just the sweet treat Gary needed for a change of pace: “As I smoked it, I constantly found myself smiling.” And why wouldn’t he? The Deadwood Sweet Jane sure lives up to her name: a mellow Corona teeming with sweet earth and sweet tobacco, before turning decidedly spicier with an intense cinnamon finish. A fun cigar to smoke, and very approachable for a wide range of cigar enthusiasts. Watch this review and see what else you need to know before you buy a box!

Padron is usually found in the pricier category of cigars, but their ‘Thousand’ series has long boasted general admission pricing for VIP-level flavors. This Classic Edition let us look back and sample the beloved Padrón 3000 Maduro. We were mighty impressed long ago by its medium-bodied notes of white pepper, earth, sweetness, and – of course – Padrón’s signature coffee and cocoa flavors. Still are: this Nicaraguan cigar staple keeps the magic alive, and keeps Padron among the best budget-priced cigars. “Certainly lived up to everything it’s known for,” said Gary. Roll back the clock and watch the highlights of this #nowsmoking cigar review.

We found ourselves #nowsmoking our way through the boutique cigar category by Fall…and Warped Flor del Valle Cristales was on Jared’s to-do list. On paper, it all checks out as “humidor-worthy”: boutique cred, Corojo wrapper, small ring gauge, medium body…all the stuff cigar geeks go wild about. It’s an all-Nicaraguan cigar that boasts all the flavors (like sweet wood, coffee, and earth) he could hope for, plus complexity to appreciate. He even had a tip to share on when best to smoke it – it’s all part of his Cigar Advisor #nowsmoking highlights.

HVC Serie A has been a customer favorite since its debut two years ago. We’ve been huge fans of it, too. Which was one more reason to work with Reinier Lorenzo on an exclusive Toro that we here at Famous could proudly call our own, the HVC Serie A Exclusivo. Limited to 300 boxes in 2021, just a few remain: watch Jared get into the details on this special Serie A size’s flavor, strength, and more. Spoiler – yes, this boutique should be destined for your collection.

Surprise! Rojas Street Tacos taste like…well…tacos, but there’s much more to these cigars than that. Jared was #nowsmoking the Street Taco Barbacoa: he talked about balance, flavors like tangy spices, wood, butter, and citrus; and even though it’s got a kitschy name, why he thought that this cigar was anything but a novelty. There’s still a lot of buzz on this brand, and he’s here to cut through all the hype – because Street Tacos is the real deal, and one of our Cigars of the Year.

It’s easy to make a flavorful cigar with a high price tag – but making one on a budget requires a master. And luckily, the master in charge of the Famous Smoke Shop exclusive Indomina is AJ Fernandez. Jared Gulick reviewed the Toro size, finding notes of cocoa, wood, coffee, and plenty of spicy pepper. Was he impressed, or did the old adage “you get what you pay for” still apply? All we’ll say is, it’s a great way to stretch your cigar budget. For the rest, watch now and find out…

Winter marked the debut of the last member of the 2021 Famous Exclusivo lineup, a partnership smoke with Aganorsa Leaf. Jared was #nowsmoking this Toro for one of our midweek review videos in December, and discovered flavors like wood, fresh dough, cocoa, sweet butter, and spices. Another limited edition, only a few dozen boxes of this special ’21 small batch cigar remain – see if Jared’s short video breakdown of the blend’s flavors, strength, and complexity are enough to make you want to grab one of the last few left!

Rafael Nodal, who likes to compare his cigars to composing music, teamed up once again with Nestor Plasencia for the Romeo y Julieta Eternal. They’ve made beautiful music together on brands like Trinidad Esteli – so why wouldn’t we expect more of the same? This limited-edition Toro was blended with Plasencia’s private reserve Nicaraguan tobaccos including its double-fermented, 26-month-aged wrapper. It’s a Nicaraguan puro, and Gary called this the “perfect cigar” – so much so, that even he bought a box. See if his review inspires you to do the same.