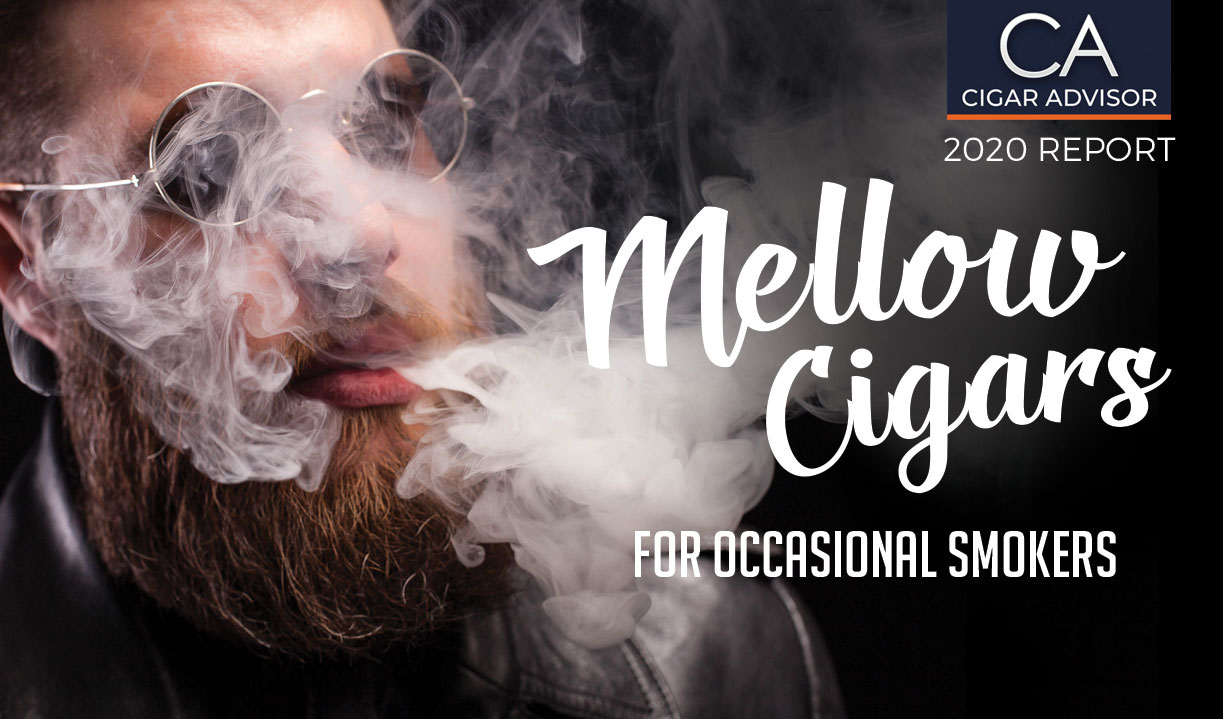 No matter what anyone tells you, there’s no minimum requirement of cigars you need to smoke to qualify as a cigar enthusiast. It’s okay to be occasional. And whether your speed is one a week, a month, or even just a handful a year, you’re on equal footing with us…no matter what the snobs say.

That got us thinking.

Would we recommend the same cigars to casual smokers as we would the hardcore crowd, even if they’re smoking the same type of cigars? Probably not, at least not always. Not because we don’t think you’re worth it, but because we think you are. Take me for example: I smoke anywhere from 5-15 cigars a week. If I have a couple of letdowns here and there, I’m still coming out on top. I’m enjoying them more than I’m not. Cut those numbers down to one a week, and two or three disappointing sticks start to add up and leave me wondering if it’s worth continuing at all.

To keep you from giving up the passion, I’ve loaded this list with cigars – all mellow-to-medium in body – that go the extra mile in flavor. If you’re only lighting up once in a blue moon, it better be special, right?

And now a question for you:

Do you want to stay in the mellow camp, or is graduation to bolder cigars your goal? If you want to stay put, this list will give you some of the best bang for your buck without the whoa bellies. For those of you trekking onward and upward, you’ll get a glimpse of what to expect on the other side.

The secret to AVO Classic’s ultra-creaminess is its five Dominican filler tobaccos – even one that’s been aged 25 years! It’s a hair north of the $10 mark, but still quite modestly priced when you’re purchasing them infrequently…and consider that it’s made by Davidoff. I enjoyed the blend’s notes of cedar, sweet wood, and earth, and couldn’t find a millimeter of bitterness. Don’t be surprised if this blend gets you smoking more often!

Don’t worry about that darker leaf, Charter Oak Maduro is still plenty mellow…even if it’s your first time. But what it isn’t is boring. Sweet notes of earth, spices, coffee, and even a splash of dark cocoa will take your smoking interludes to the next level – all the way up to the edge of medium-bodied. Depending on how often you light up, this can be a really good after-dinner smoke. Did I mention it’s ultra-affordable, too?

If you’re looking for creamy, you’re looking for Crema. Seriously. It’s probably the most accurately named cigar since The Egg. Unlike most of Espinosa’s fare, Crema doesn’t rely on pepper and spice, but instead, smoothness. I taste vanilla, cedar, nuts, and light baking spices when I smoke it. It’s kind of like the ice cream of cigars and pairs incredibly well with coffee or even soft drinks for an ice cream float kind of vibe. The hype is real, ladies and gents. You’ve got to try it to believe it.

There are three reasons why Fuente is a legend in its own time. 1. Meticulous craftsmanship. 2. Affordability. 3. Rich flavors. It’s a trifecta that’s much easier conceptualized than produced, but Fuente nails it with just about every cigar they make. On this sample, I found oak, caramel, earth, and leather. The benefit here is that this smoke is big on these flavors without hitting heavy in any regard. Bonus: it’s a little sweeter than what you find in a traditional Connecticut.

Here’s a Southern Draw cigar that’s universally loved by just about anyone who’s tried it. Why? Because it gives just enough kick to satisfy the full-bodied crowd without overpowering the newbies. As for flavors, think cream, zest, nuts, and even a hint of coffee at times. All of this makes Rose of Sharon a great transitional cigar. You might even find yourself craving something bolder as a result! If you’re nervous about taking the plunge, I assure you, this one’s worth it!

Undoubtedly Steve Saka’s sweetest cigar, Brulee broke the internet when smokers were so impressed by the cigar’s sweetness, many refused to believe it wasn’t done artificially (it wasn’t). Beyond its natural sugary appeal comes notes of cedar, earth, and cashews. A testament to the fact that the guy who gave us Liga Privada can make ballads, too. This is as close as cigars come to candy without being flavored. Try it and let me know if you agree.

A $20 cigar every day may not be feasible for most, but if you’re smoking them occasionally, that amount here and there probably wouldn’t make or break most, either. And as a splurge cigar, Cohiba Connecticut brings the goods. The wrapper – smooth and silky, and it burns to a wonderfully nutty note. Sweet cream, cedar, earth, and wood are expertly refined. No doubt, it’s a luxury smoke, and worth dropping a little extra coin on once in a while.

If you’ve enjoyed the regular production Capulet series, the blend on the Famous 80th edition is the same, with one key difference. This cigar is box pressed…and what a difference it makes! The smoke burns and feels cooler in the mouth, the flavors are slightly more concentrated, and (if you’re like me) it feels better in the hand. Though it starts out a bit peppery, it soon levels off with sweet natural tobacco flavors with notes of wood, spices, vanilla, and earth. This Romeo is love at first puff, especially at its price.

Rocky’s another boom-era superstar who knows how to make a chilled-out smoke, but he still made sure Edge Connecticut was complex. Nuances of cedar, citrus, earth, and leather are accented by a floral finish. This gives the cigar a dash of Cuban style to it, and if you’ve ever enjoyed a real one, you’ll know exactly what I’m talking about. Rocky Patel is one of the most consistently purchased cigar brands. Smoke this, and you’ll see why.

Okay, full disclosure. This one’s probably the boldest of the group, but I wouldn’t have added it if I didn’t think you could handle it. And the flavor notes – they make it all worth it. Bread, wood, coffee bean, and a hint of raisin. Sounds awesome, right?! Perdomo 20th Anniversary Connecticut has structure in its smoke like a wine has structure to a sommelier. Every flavor builds off the last with flawless execution. It’s like a party on your palate for the better part of 90 minutes.

Thanks for the 10 mellow list. Have a pal that got started when I have him a Fuente. Since then, he continually buys strong 💪 cigars and complains. Told him a few to try. I’ll forward this info to him and hope for the best. LOL

Ken, we hope this helps him. Thanks for reading and your support!

The Pedomo 20th Anniversary Connecticut was everything you said it was A very wonderful smoke great nuances of flavor. I really loved. Excellently constructed and a perfect burn all the way through. I almost burned my fingers smoking it to the end. The smoke was cool all the way through. A great cigar from a great company.

Bob, thanks so much. We try to keep things simple so that you’ll know what to expect. It means the world to us when we hear that it’s resonated so well. Enjoy the cigars and cheers!

My favorite cigar! I love to sit back and enjoy this cigar in a Churchill, for the better part of 2 hours.

Harvey, Thanks for reading! Glad you enjoy it!

I agree 100% with this list. Like them all except the Cohiba. I thought it was a horrible cigar.

Sure, they can’t ALL be winners for you. But have you tried the Cohiba Black? ;-)

Reading Time: 4 minutes You’ve passed cigar boot camp – now it’s time to go all in on your first box. So many choices…so little time. We make it easy with our five first cigar box buys worthy of pulling the trigger.