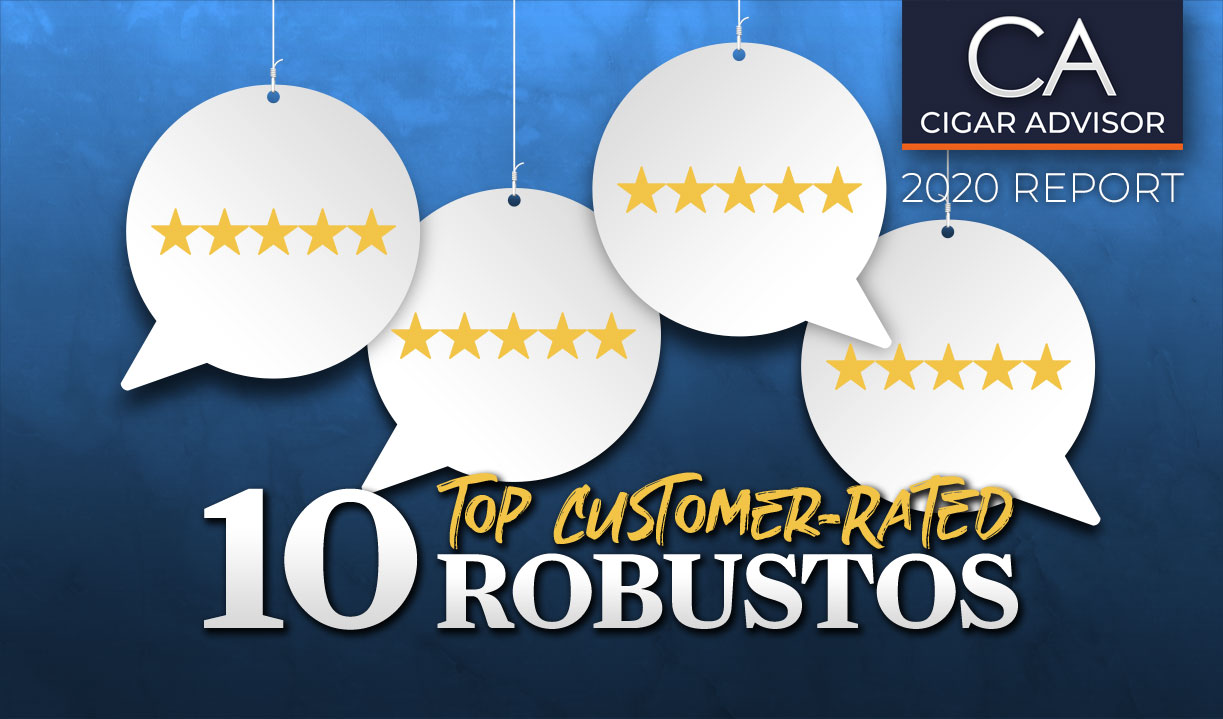 The Robusto – that pudgy little delight of a cigar! It’s among the most popular cigar shapes, mostly affordable, and perfectly sized for a good 35 to 45 minutes of smoking pleasure. In this report we take a look at 10 Robustos, all of which have received an aggregate 4½ to 5-stars by at least 25 customers and more. By my logic, that many cigar smokers can’t all be wrong. (Note that most of the individual reviews were 5 stars.) Additionally, it makes this list more accurate in terms of perceived quality and flavor. But as we always say – your mileage may vary.

What size is a Robusto cigar?

Over the years, as wide ring cigars became more popular, Robustos began to widen-up as well. Several of the cigars in this list are rolled to a 52 ring, while the CAO Brazilia Gol! comes in at a whopping 5″ x 56.

When did the Robusto first appear?

In a 2007 Aficionado article by James Suckling, “The Robusto Generation,” the author references Simon Chase, Cuban cigar agent for London’s famed Hunters & Frankau tobacconists: “[W]hen Chase entered the cigar trade back in the late 1970s, he says ‘the word robusto did not exist. In fact, it did not make its first public appearance until 1989.'”

Suckling also points out that the highly popular, Cuban Partagas Serie D No.4 (4 7/8 x 50), entered the market during the 1930s, while “other popular robustos such as Hoyo de Monterrey Epicure No. 2, Bolivar Royal Corona and Ramon Allones Specially Selected date back to the 1950s and 1960s.” However, these cigars were usually reserved for the connoisseur class, mostly in Great Britain.

It was the Cuban Cohiba “Robusto,” released in 1989 as one of the brand’s three new sizes that year, which, according to Chase, “caught everyone’s imagination.” And Suckling adds, “[Cohiba] never realized at the time that they were about to revolutionize the cigar industry with the robusto.”

How did the Robusto cigar get its name?

The name Robusto, was originally coined by the factory rollers in Cuba who used it to describe the cigar’s shape. Not only did the name naturally align itself with the cigar’s short and stout dimensions, the Robusto was one of the first times a cigar named by the factory workers became an international hit in the retail market.

One of the most flavorful and complex cigars in the Robusto category, the 601 Blue Label series was released in 2007 and was originally made by Don Pepin Garcia. Today, Erik Espinosa continues to make these puros at his La Zona factory in Estelí, and they haven’t skipped a beat.  This box-pressed Robusto runs like a well-tuned Harley offering a payload of dense, creamy smoke that teems with notes of espresso, dark chocolate, Nicaraguan spice, and more.

I’m not surprised this modern classic got such a high rating from so many customers. Ever since the CAO Brazilia line was released in 2001 the Gol! has become a stock favorite for full-bodied cigar lovers. Draped in a dark Brazilian Arapiraca wrapper, this portly beast turns on the charm with dense, chewy smoke chock-full of coffee, cocoa, sweet wood, and a satisfying helping of spice. It’s not unusual to find at least one CAO Brazilia Gol! in many of the most experienced cigar smokers’ humidors.

A cigar that’s maintained its prized status since the Cigar Boom 90s, the Hoyo de Monterrey Excalibur Epicure is what I call a wonderful kick-back and relax cigar. Blended with a Dominican, Honduran and Nicaraguan filler core bound in a Connecticut broadleaf, the smoke is medium-bodied, and perfectly-balanced with a creamy finish. Notes of sweet tobacco, cedar, roasted nuts, and a smidgen of spice make this Robusto downright heavenly any time of day.

By far, one of, if not the best coffee infused cigars on the planet. Even cigar smokers who smoke traditional blends 99.9% of the time reach for a JAVA when they get the urge to try something out of the ordinary. Pressed in a silky, Brazilian Mata Fina wrapper, the all-Nicaraguan core actually does offer an adequate amount of natural tobacco flavor. But for the most part, the JAVA Robusto is lusciously sweet and creamy throughout with a rich flavor profile, and a mocha-java aroma to die for.

If you’re a fan of Oliva Serie V cigars, the Serie V Melanio Robusto is their magnum opus. (It also took the #8 slot for Aficionado’s Top 25 Cigars of the Year in 2016 with a “94.”) Packed with Jalapa-grown Habano ligero that’s been fermented and aged to perfection, the cigar is full-boded, yet extra smooth, offering well-defined notes of leather, coffee, and caramel, underscored by a ribbon of dark chocolate. A simply exquisite cigar that must be smoked to truly appreciate.

This Robusto from Padrón’s main line, “Thousands” series is one of the best ways to introduce yourself to this iconic brand’s legendary “cocoa and coffee” character. Padrón cigars always draw effortlessly, and the oily Maduro wrapper on this puro lends a little more sweetness to the mix. Earthiness and cedar set the table for a full-flavored smoke studded with notes of cocoa, espresso, bittersweet chocolate, and a trace of raisins with a shot of pepper on the finish.

In 2000, Nick Perdomo and his late father, Nicholas Sr., discovered a field in Nicaragua (later named “Lot 23”) that was so fertile they needed to do little more than plant the tobacco seeds and water them. Using Cuban-seed Corojo & Criollo ’98 tobaccos bale-aged five years, this Robusto (one of three Lot 23 blends) is capped by a plush, natural sun grown Habano wrapper. Deafening applause and rave reviews ensued due to this cigar’s rich, creamy flavors of earth, cedar, and nuts on a respectably spicy finish.

Someone had to be the first to successfully grow tobacco organically in Nicaragua, and the credit goes to Nestor Andrés Plasencia. This Plasencia Original Reserva Robusto is an excellent example of one of the purest tasting cigars you’ll ever press to your lips. A puro through-and-through, the tobaccos are aged over three years offering a smooth, medium-bodied smoke with a rich, natural tobacco flavor. The flavor profile is well-balanced and primarily cedary underscored by notes of leather, coffee, and sweet tobacco.

I’ve lost count of how many cigar smokers have told me how much they love the Rocky Patel Rosado cigars. Capped with an extra-long-aged Ecuador sun-grown Sumatra wrapper, the Robusto issues primary flavors of leather, cedar, and nuts with a peppery finish. A welcome hint of chocolate enters and exits the scene at times, but to put it simply – the Rocky Patel Rosado Robusto offers a smooth, medium-bodied tapestry of sweetness and spice.

A tried-and-true classic in the Robusto universe, the Romeo y Julieta 1875 Bully is one of the best selling Dominican cigars of all time. For (1) it has always been affordable, (2) as recommendations go, it’s one of the best cigars for beginners, and (3) it’s amazingly consistent. Built on a medium-bodied Piloto Cubano core, the key note is cedary, underscored by a chorus of leather, toasted nuts, sweet spice, and a ¼-teaspoon of coffee. Great anytime of day, and a welcome break from the heartier, spicier fare.

La Aroma de Cuba robusto is rated 89 by 12 reviewers(add me to that list), and should be on the list.

Basically a popularity contest, not a real taste test. Valid, but it’s like saying Chevy and Ford win Best Cars. If you really want to explore some interesting and impeccable robustos, try Neanderthal, Eiroa, Sobramessa, My Father, Liga Privada, and La Gueguense.

Absolutely agree John – the Padron 1964 Maduro Diplimatico is my personal favorite, one in which all others are measured (for me) – however Eiroa First 20, My Father #1, Espinosa Laranja, Crowned Heads Imperiosa, Tatuaje Black Label (corona) amongst many others should also be tried. Often the boutique brands are overlooked due to the marketing of the big names which includes Padron (not to say that the more well known brands aren’t good) Although they all don’t produce the traditional robusto dimensions they each have one that’s close in size and should be smoked.

Different strokes for different folks, I know, but here are a few of my faves: La Boheme, Perdomo Lot 23, Ambos Mundos from Tatuaje and Caldwell Blind Man’s Bluff.

Gentlemans and Ladies, you’re miissing on a Great cigar: Leo’s Choice by Cabana. Try them and you wan’t go back to Padron

I like to see listings like this. While I don’t care for some on the list, I’m full bodied smoker, I read all the reviews on this site. I agree completely. Some people may smoke none of these sticks, but it’s good to see the range of smokes people enjoy.

Rather than seeing all the other sites touting $15 to $50 cigars and promotional dollars paid, I believe these are honest reviews representing many smokers. Most of my favorites are in the $5 to $7 range. I rarely smoke high end cigars.

Again thanks for the good work!

I’m a relatively new cigar smoker trying to make some quality cigar selections and lists like this help quite a bit. As it happens all my selections will be Robustos, I like the size.

I’m also staying in the mild to medium range of strength and in the $5 to $8 range in price.

I was shocked that no Pepin, Pete Johnson or Ligas where on the list. A real quick search found:

Good list and I scored a couple of them to try for myself. The Romeo Y Julieta was a great smoke for me. I would also suggest the Camacho Connecticut. Similar cigars.

My got is cromagnon aquitaine

Smoked everyone on the list and it’s hard to disagree with any of your choices. A new favorite of mine is the CAO Pilon. Medium smoke, burns wonderfully, lots of flavor. Smoke on, Brothers of the Burn!

Can’t fault the article, but does everyone else really smoke their robustos down to the nub in 40-45 minutes? I like to smoke a cigar, not use it as a breathing tube. 😂

I agree with Mike, 40 – 45 minutes? I don’t smoke a robusto that fast. I guess some do. I like to make it an experience by taking in the changes of notes in each third.
As far as the list, I agree with most of them and that’s what’s so great about cigars…different strokes for different folks.
Keep the lists coming!!

Reading Time: 5 minutes Last year, Forged Cigars & Robert Caldwell created the Bolivar Cofradia Lost & Found. For this review, Gary smoked the EMS Robusto. So, did he get lost in a fog of stale smoke, or has he found a winner he can endorse?

Reading Time: 4 minutes At a glance, it looks like a large caliber bullet shell. It even gleams like polished brass. With only 8,000 boxes released, it’s the Oliva Serie V Melanio Edicion Limitada 4×60, and Gary’s got the full scoop on this stocky, box-pressed cigar.

Reading Time: 14 minutes See the 25 cigars that earned their way into our humidors: Check out our definitive list of the best cigars of the year in 2020!