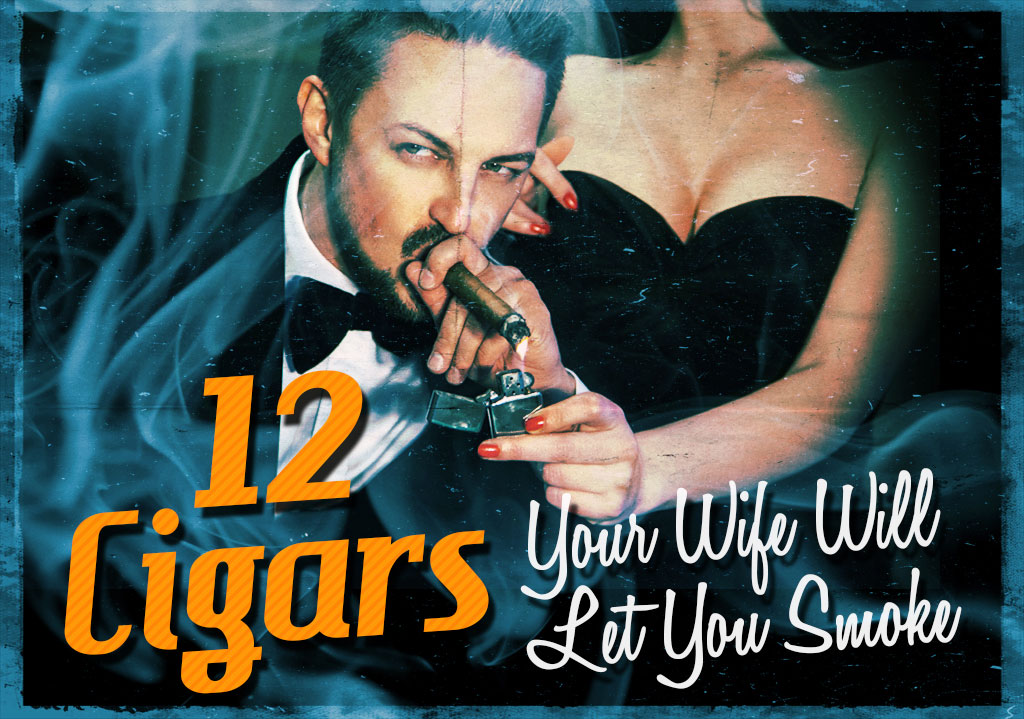 The Wife and Cigars – 12 Cigars She’ll Let You Smoke

Let me be clear up front: I’m only kidding with the title, and cigar wives get a bad rap. You know as well as I do that you’re going to smoke the cigars you enjoy best – and while your wife and cigars may not get along really well, it’s not like she’s going to keep you from smoking them. For the majority of us, the situation is this: my wife isn’t totally against cigars; it’s just that she’s not totally into them, either.

For a rare few, some actually share cigars with their significant other. Which, when I asked a couple friends about how prevalent this smoky “together time” really is, one of them remarked, “Tell me again why I would want to sit out on the deck with a drink, a cigar AND my wife?”

Ah, the clearly stated case for “me time.”

If this rings true to you, you’re likely in the camp where your wife and cigars get along as well as oil and water – with her loathing the fact that you have found this hobby as the one that soothes you, as well as the smell of your clothes, breath and the house (because you smoked by an open window). My guess is that kind of scorn is pretty rare, though – truth is, she’s probably not as irked by the smell as she is by the amount of money she thinks you spend on your hobby. Telling her about your latest cigar haul, how much money you saved on cigars? Even if you paid only three dollars a stick, your discount is nothing compared to her $40 mani/pedi Groupon. So if she tells you that “you and that cigar smell like a burning work boot,” don’t tell her “at least I don’t (insert horrifyingly self-destructive vice).” Just explain as I did, with a wry smile, that there is room for both your wife and cigars in this relationship – and that you love them each in their own special way. If her eyes glaze over in disbelief, so be it.

Maybe you’ve heard this one: “I don’t care what you do, but I still think they’re nasty!” Jeez…thanks, dear.

If this is you, and the wife and cigars rarely mix, that’s ok too. Be sensitive to her wishes with respect to your hobby and you’ll get some in return. If that means smoking when she’s not around, so be it. Smoking outside is an easy one. Brushing your teeth after the fact is a very small sacrifice. Some guys bring a change of clothes for after a herf, others carry a stash of breath mints and hand sanitizer in the car. You really want to go the extra mile? On a previous article about the ability to both keep the peace with your wife and cigars as a regularly-enjoyed treat, one reader commented a link for a face-cleansing antibacterial wipe made for men that claims to “eliminate odors and leave you feeling refreshed” – and said he swears by them for removing the reek after a smoke. There is give, and there is take – and each of these simple rituals is a small price to pay for the pleasure a good cigar will bring you.

At the end of it all, though, I’ll bet your wife is like mine: she usually asks what I’m smoking and whether it’s any good, and remarks to me about the cigars of which she likes the smell, and which ones she doesn’t. For instance: I occasonally like to smoke a Baccarat Churchill because

of the sweetened cap and the smooth, creamy smoke; she likes Baccarat because of the Dominican-bred barnyard pre-light smell, and the grassy aroma of the tobaccos.

Cigar smokers are a respectful bunch – as long as you show some to her, there shouldn’t be much to moan about. And if you decide to smoke some of the more pleasantly aromatic cigars like these when she’s around, it might score you some common courtesy points…

Handmade with a golden Connecticut wrapper grown in Ecuador, Por Larrañaga gives off a creamy, mellow aroma she’ll appreciate; what you’ll like is the mix of Dominican Piloto and Olor tobaccos, which add a flavorful tinge of spice to an otherwise sweet and unassuming smoke.

Here’s a good way for both of you to get your aroma fix – the scent isn’t far from a sweet iced coffee, which last time I smoked it on the patio, drew my wife in like a mosquito to a bug zapper. “What is THAT,” she asked. “A coffee-infused mild Dominican,” I replied. “You should smoke those more often.” Will do.

Because it’s such a mellow cigar, Macanudo is one I can puff on for hours – so I like this in a bigger size like the Prince of Wales, an 8×52 Presidente. The creamy CT Shade wrapper is legendary for its sweet aroma, the Dominican-Mexican blend hailed for its easygoing flavor. And she doesn’t seem to mind.

If you didn’t think a full-bodied cigar could have a mellow and gratifying aroma, think again. Or better yet, think Flor de las Antillas. Pepin’s tribute to Cuba features a sun-grown wrapper from Nicaragua, which smokes with a sweet, creamy note – the box-pressed shape means a fuller, meatier flavor for you. And that is good.

Rocky is responsible for a host of flavorful smokes – most of them being very beefy and full. But among the standouts is the 20th Anniversary, a blend of Honduran and Nicaraguan tobaccos clad in a wrapper from Honduras. If you like complexity with an incredibly appealing room note (see our review here), you’re ready to take a crack at his most refined cigar yet.

The 20th Anniversary is evidence that Perdomo has mastered the barrel technique: after a 6 year aging, the Nicaraguan tobaccos are fermented an additional 14 months in bourbon barrels. Smooth and savory are the first words that come to mind, and you’d be hard-pressed to describe the aroma of this Perdomo as anything other than alluring.

Mild to medium in strength, Perla del Mar has a little more zing than other Connecticut-wrapped smokes because of the Nicaraguan core – and leaves a little more on the finish. It’s also on the more affordable side, meaning a box won’t demolish your cigar budget.

One of Romeo’s most highly-rated, yet under-appreciated blends. Romeo Reserve smokes a solid medium, maybe medium-plus depending on your palate – but I like this for the spicy snap of the Nicaraguan Habano wrapper. Comprised of heartier Honduran and Nicaraguan tobaccos, but fills the room with an agreeable aroma.

Fuente departs from their usual Cameroon wrapper leaf and goes Connecticut Shade; wrapped in cedar, that flavor has made its way into the cigar for a smoke that gives off a very woody character…you know, the kind of smell on which people will actually compliment you. And at a box price under 5 bucks each, you get a price that’s reasonable to the wife and cigars that are hard to beat.

A bit of a departure for Montecristo, and one of my top 10 smokes of all time. I say departure because the wrapper is an earthy Mexican leaf that’s much spicier than any of the Connecticut leaves they often use, yet fills the air with an essence that delights the senses. While it’s an outlier among these mostly Connecticut-wrapped smokes, Platinum’s 3-nation blend burns as smooth as silk.

Time to turn on your masterful negotiation skills. While this No. 3 toro is pricey (she’ll hate that, but hey – it’s a Davidoff), it’s a full-bodied slice of heaven that dominates with its Connecticut wrapper’s intense aroma. Under these circumstances, it’s ok to be unapologetic; this Aniversario is not an everyday smoke. Make that fact known to your wife and cigars like this will always have a special place (or occasion) in your lineup.

To many cigar smokers, aroma is a bonus – to Avo, it’s a critical part of the smoking experience. Savory flavors of cedar and coffee abound with XO’s Dominican tobaccos, with a creamy spice from the very aromatic Ecuadorian Connecticut wrapper. By now, you should be seeing a theme here: Connecticut = aroma. Believe it.

Zino Davidoff, the godfather of modern cigar smoking, was quoted as saying, “If your wife doesn’t like the aroma of your cigar, change your wife.” That’s expensive, and probably unnecessary. Instead, make it an opportunity to change up your cigar selection while you’re smoking at the house.

And while she may not like your cigars, I’m sure she does things you don’t like. Sometimes you just have to bend when you are in a relationship. But what do I know?  I’m not a relationship advice guy, I’m a cigar guy.

My wife and I have a cigar together every day, she loves them. I still enjoy my “me time” but that’s usually on the weekends.

My husband & I sometimes smoke together. But I smoke everyday. He smokes maybe once a month or so.

My wife had smoking a cigar on her bucket list. That was about 5 years ago. We both enjoy a good cigar and a tastey drink to go with it. Savoring the moment has gotten easier.

My wife and many other women have always liked the smell of an Acid Kuba Kuba.

My wife smokes cigarettes and still says our porch, my cigar smoking space, smells like ass. Needless to we don’t share the enjoyment of a good cigar.

I was at a Mexican restaurant a while back that had a large open courtyard where they allowed smoking. After dinner I fired up an Onyx Reserve. About ten minutes into it this lady starts walking in my direction and I brace for another lecture on how horrible cigars are. As I sit there, she walks up puts her hand on my shoulder and says, “I hate the smell of cigars, but I actually love the one you are smoking!” I happen to love the Onyx Reserve as well.

My wife has no problem with any of my cigars, ha what wife :)

How can you not include the Drew Estates Java on your list. These smell great right out of the box and smoke the same.

she’s been pilfering my stash

When I started smoking cigars, my wife loved the Davidoff CRU 3. It’s hard to find many full bodied cigars that smell good. Except to a cigar smoker. I was given a Spectre and told she’ll love it! Haven’t gotten to that but she has no problem with the smoke as much as the cows ass prelit smell.

My problem is trying to keep my wife out of my resting humidor!

I smoked an arturo fuente short story my wife love it…greetings from mexico!

Whoever wrote this article obviously never smoked a Natural Dirt Torpedo or a Tabak Especial by Drew Estate.

I am going to try the Perdomo this evening

The Drew Estate Java, Nub Cafes, CAO Flavors and Makers Mark are some of my favorites and the wife likes them as well.

My husband gets along with cigars pretty well…