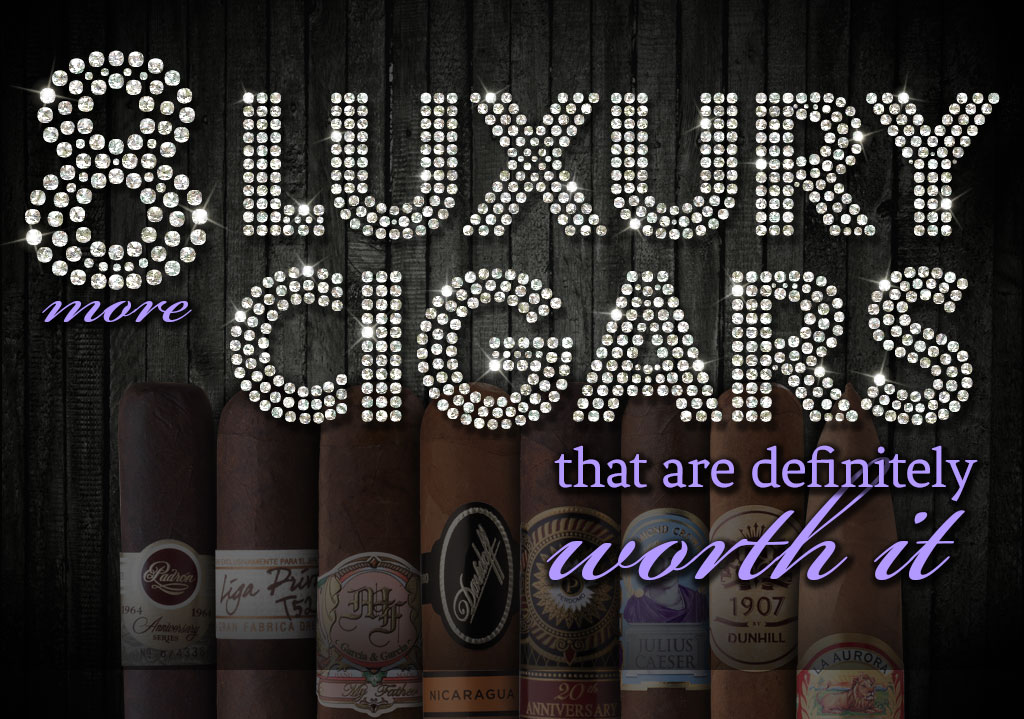 Eight More Luxury Cigars That Are Definitely Worth It

Back in January I wrote the article: 9 Luxury Cigars That Are Worth It and the response was pretty overwhelming. I mean, even we can’t afford to smoke ‘em every day (and not many can), we just LOVE talking about ‘em.

So, again, I start by stating the words that many a cigar lover has uttered: Life is too short to smoke cheap cigars. Now, does that make one a snob? Honestly, I don’t think so. Personally, I feel that if I’m going to take the time to go outside and invest forty-five minutes to an hour of my time with a hand rolled stick, well, I’d better make sure it’s something I’m going to enjoy. Sure I’ll smoke bundled yard gars when the time calls for it, but when I want to relax at the end of a long day, I feel that I deserve a nice treat.

To be clear, I don’t smoke super high-end cigars every day. There’s a ton of great smokes that fall into the $5 to $9 range and I enjoy the hell out of them. But, I certainly do like to treat myself to some luxury when I want to – for no other reason than I deserve it.

So, I’ve come up with a list of eight more smokes that exceed the $10 barrier that I personally enjoy – and the key word there was “personally”. I had people give me crap in the comments last time like “I can’t take this list seriously because you left so-and-so off the list,” (see my sidebar below on Opus X), or some of the ones I picked weren’t up to some people’s liking. Guys, let’s cut to the chase: CIGAR SMOKING is SUBJECTIVE. Like with food, drink, cars, sports and crazy hot redheads, we all have different tastes. The purpose of the article is to provide a list of upper-end sticks that I happen to like and that I feel are worth the money. I’m just passing along some information to help you make a somewhat educated decision on whether to give something a try. 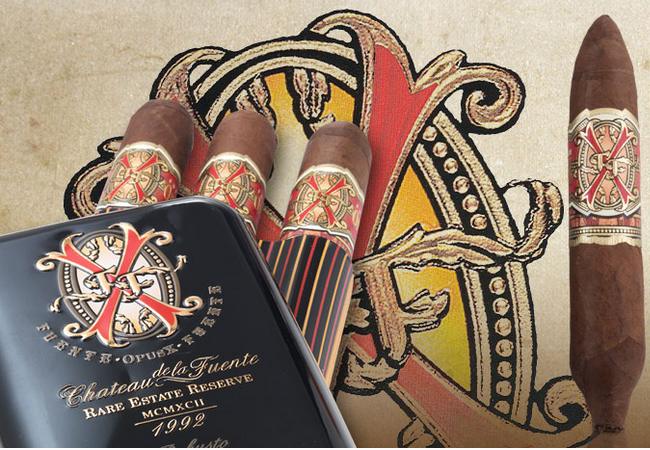 So, about Opus X…I heard from several of you in the first Luxury cigar article back in January demanding to know why Opus X was missing from my list of luxury cigars. Plain and simple honest answer: I’m not a big fan of that cigar. Sure it’s a premium, well-made stick filled and wrapped with nicely aged tobacco – but the profile just isn’t my personal cup of leaf. I know a lot of you love it, but as I said at the start of this piece, this is a SUBJECTIVE list of MY favorites so that’s why I chose the cigars I did. Does that make me a bad person? Damn, I hope not. I mean, guys – I’m a cigar lover and a guy who fights for our rights to smoke every day. Plus my kids like me, and that’s gotta count for something.

One important point I want to make is that this is incredibly hard work having to smoke all of these insanely expensive and delicious cigars, rolled by top master blenders and filled with well-aged tobacco. I am one dedicated son of a bitch and I do this for all of you guys because it’s just the kind of person I am. My mom always said I was the salt of the earth and I guess she was right. I give and I give and if someone has to burn all eight of these super-premium luxury cigars, then I will step forward to take the hit for my fellow cigar lovers.

Now on to the Cigars…

This cigar has been high on people’s lists for a long time and deservedly so. The Padrons sent a message to the cigar world when this stick arrived on the scene, a message that premium quality cigar making is something smokers will pay for. The all Nicaraguan maduro is a richer, sweeter smoke than the natural, using super premium, small batch grown leaf that billows smoke with every puff. With a complex flavor profile of cocoa, coffee bean and a hint of hazelnut, the ’64 is a true boxed press beauty.

This coveted smoke was the encore to the Liga #9 and has a hell of a loyal following. I think it’s a bit smoother than the #9, possessing rich and creamy full bodied notes of espresso, wood and peppery spices. Inside you’ll find a balanced blend of Nicaraguan, Honduran, Dominican and Brazilian tobaccos. But it’s that special stalk-cut Habano seed oscuro wrapper that gives off its distinct sweet flavor. One of my faves and I know a lot of you out there feel the same.

Don Pepin… okay, there – I said it – and now you know that this cigar is special. It was released in 2008 by Pepin’s son, Jaime, as a tribute to his legendary dad. It’s full-bodied with a Nicaraguan blend inside, and the wrapper is a beautiful looking hybrid mix of Ecuadorian Habano Rosado and Criollo leaf. It’s a little spicy, a little woody with some notes of black pepper. Always a great smoke that you just don’t want to part with.

I think that this is one of Davidoff’s finest releases in ages, proving to the cigar world that they don’t just make mild-bodied smokes. It’s a full-flavored gem that stimulates the palate with a delicious complex blend of both bitter and sweet. It took ten years of blending and aging to get this silky smooth Rosado wrapper where they wanted it, and like they say, good things really do come to those who wait.

Okay, we know Nick Perdomo makes great cigars, but it was the release of the 20th Anniversary Maduro that put our friend’s blending prowess over the top. The construction is superb as every effortless draw lets off a mountain of creamy white smoke. Rich notes of coffee bean and dark chocolate linger on the palate due to a Nicaraguan Broadleaf maduro wrapper that is cedar aged, then aged over a year longer in bourbon barrels, giving it that sweet aroma and taste.

While Diamond Crown cigars are known for their smoothness, the Julius Caeser takes smooth to an even higher level. This is a medium bodied cigar that is brimming with a sweetness from tobaccos that are fermented and aged with absolute perfection. Made by the Fuente family for J.C. Newman, they claim that the inner blend is a secret mix of different tobaccos while the wrapper is a flawless Ecuador Havana-seed leaf. Woody, toasty, tasty and luxurious.

The people at Dunhill don’t come out with new blends often, but when they do, you know it’s going to be top notch. The 1907 isn’t the mild and creamy Dunhill of the past as this offering is fuller flavored, rich and complex. The blend is a proprietary mix of Dominican ligeros and Brazilian Mata Fina to give it some kick, and the wrapper is a smooth and wickedly tasty Honduran Olancho leaf. With notes of wood and nuts, it’s a cigar you can enjoy with anything from whiskey, wine or coffee.

Here we go full-bodied fanatics, a stick that boasts a dark chocolate Connecticut Broadleaf wrapper that makes this cigar both earthy tasting and sweet at the same time. Make no mistake about it, it’s a full-flavored cigar made for maduro lovers who want to KNOW that they’re smoking a cigar. Inside there’s a hearty mix of oak barrel-aged Cameroon, Brazilian and Dominican leaf causing the flavor to build and intensify.

So There You Have It… Another list of Luxury hand rolled goodness that I enjoy when I’m in the mood for a super stick. So tell me which ones you like and what you would have on your list. But, make sure you read the first luxury cigars piece I wrote in January to see the complete list I’ve come up with!

Nice work Z-Man. Im also a Z-Man, so you gotta be a good dude. I like your list, except that Julius Caesar. I just dont understand the hype over this insanely overpriced cigar. Happy and healthy new year my Brother.

Great list! Thanks for the intro to the Dunhill. Can’t wait to give it a try. Happy New Year

Thanks for the recommendations �

I agree with you on most of the choices except last two (I didn’t smoke them) and My father – it is too “dry” to my taste and lacks of tobacco sweetness. Oh, and I ejoy Opus but I hate overpriced cigars.