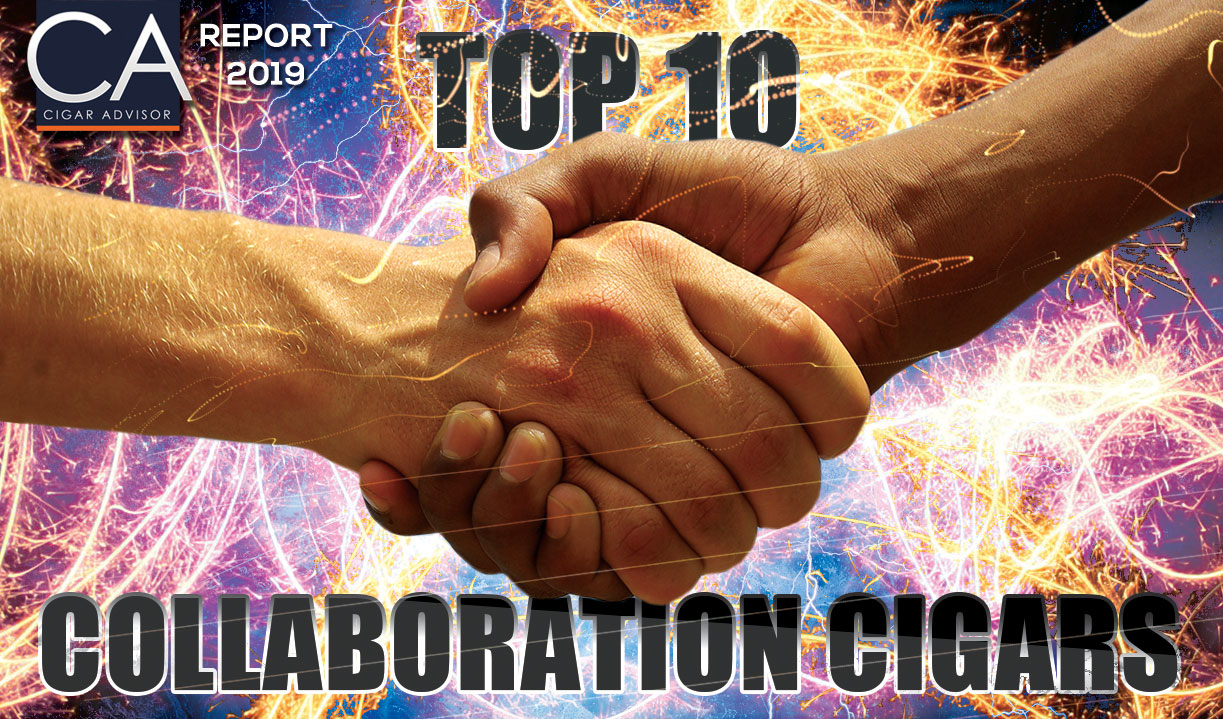 When two great names in the cigar biz get together to collaborate on a special smoke, it’s not only a big deal – it’s the setup for what can be a delicious result.

For example: one of the most highly anticipated collaboration cigars of 2019 is La Coalicion, pairing Crowned Heads with Drew Estate to make a cigar that is expected to smoke on an entirely different plane of existence. Sure, you may be a Drew fan, and not smoke a lot of Crowned Heads cigars, or vice versa – but when you get Jon Huber and Willy Herrera together in a room full of leaves, it’s hard to imagine it won’t be a blockbuster that plays well to both crowds…in short, “two great tastes that taste great together.”

For a self-professed tobacco nerd like me, collaborations are the cigar world’s version of a crossover TV show – a “wow” moment that will hopefully have me saying, “Why can’t they make this partnership a regular thing?”

TV shows cross over for a couple of different reasons: to promote new shows, to get people talking, or just get your biggest stars together on screen as a payback to the fans. More often, these collaborations exist as a fun one-off, like when David Brent (Ricky Gervais) and Michael Scott (Steve Carell) met up in an episode of The Office, or when the X-Files crossed with Cops. But if you were a CSI fan, your head probably exploded when Miami, New York and CSI collided in a 3-night mega-episode. And at the end of it all, everybody goes back to their rightful places in the tele-verse when the collab is done.

It’s much the same when cigar makers collaborate. An up-and-comer might pair with an industry vet to get their name out there, or two big names will make a splash by working on a one-and-done project together…it’s challenging, it’s exciting, and it’s their way to pay it back to you – the cigar lover – by creating something special for you to enjoy.

And more often than not, making a cigar together is just a way for these guys (and gals) to have some good, clean fun doing what they love.

Before we get to the list, I should pause to make a distinction between the two. For our purposes, we’re focusing on collaborations – which is a bit different than contract manufacturing. Some cigar brands don’t have their own factory, so they’ll turn to a popular cigar maker to produce it. E.P. Carrillo, Plasencia and AJ Fernandez are regularly asked to handle production for other brands; the difference is that Ernesto, Nestor and AJ may not actually blend the cigar. Most often (but not always), the brand owner will create his blend using the tobaccos available at that factory – or bring in his own – then arrange a contract with the factory owner to produce the cigars.

So let’s look at 10 of today’s great collaboration cigars; make sure your humidor is ready and waiting…

The San Lotano Dominicano represents the yin and the yang of cigarmaking. Jochy Blanco (La Galera, Aging Room) has brought a supply of his even-tempered Dominican tobaccos to the blending table; there, he meets AJ Fernandez (New World, Last Call, dozens more), who’s reached deep into his stock of bold Nicaraguan tobaccos to make this cigar. The interesting result is a San Lotano that’s medium bodied and spicy-sweet; I called this a “tug of war” cigar when we reviewed it, as the profile showcases the style that each of these guys is known for, but without favoring either blender explicitly. It’s not an AJ cigar, it’s not a Jochy cigar – it’s an enjoyable smoke with many layers of flavor to dig through and enjoy.

Alan Rubin and Jesus Fuego get Zen, we get Project 40. Alan Rubin: “This is a concept representative of the search to find a deeper understanding as to why cigars have a positive cognitive impact on the mind and body…Since cigars bring people together, cause for relaxation and create positive experiences, I asked myself why this concept should not be applied to premium cigars?” This cigar has also brought him Jesus Fuego, and together they’ve made a mostly-Nicaraguan cigar that burns with notes of earth, wood, spice and honey. The smoke borders on velvety and finishes long and somewhat sweet – see what kind of positive vibe that creates for yourself.

One of the original collaboration smokes that set the cigar world abuzz. And I almost mean that literally, as Drew Estate – masters of the cigar infusion process – have lent a sweet n’ creamy mocha taste to this Rocky Patel-approved Nicaraguan long filler core, and wrapped it in a scrumptious Brazilian Mata Fina Maduro. It all started because Rocky decided he’d like to do a coffee-infused cigar, and Jonathan was the go-to guy for this type of project; they called it Java (naturally), and the rest is history. Excellent as a dessert cigar, just as enjoyable as your first burn of the day.

You could call this the La Gloria reunion show. Ernesto Perez-Carrillo created the original La Gloria Cubana back in the day; and just to show you he’s still got more than a few tricks up his sleeve, reunited with Jhonys Diaz (now LGC’s factory manager) to make this La Gloria Coleccion Reserva. Wrapped in Ecuador Sumatra leaf, Nicaraguan fillers and binder smoke with tangy-sweet zest, cedar and spice; a light pepper builds from start to finish, as does the intensity of the cigar overall. Proudly made at Carrillo’s Tabacalera La Alianza in the DR, and a shoe-in for the La Gloria Greatest Hits collection that will inevitably happen someday.

AJ Fernandez returns to the list, this time to give the Montague a refresh; as for a blending partner, all it took was getting the Romeo folks on board, plus a little meddling by Famous Smoke Shop to make it happen. We asked AJ to take the intensity of this RyJ up a few notches – and he overdelivered with a darker, bolder take on the original. The Dominican and Nicaraguan tobaccos inside burn with a taste of roasted coffee, earth and wood; a Connecticut Broadleaf gives this Romeo its peppery edge, and strength bumps up against the dividing line between medium and full. I think this one tracks more AJ than Romeo, but I’ll let you smoke it and decide.

An old school get-together with Altadis’ Grupo de Maestros, Rafael Nodal and Jose Mendez – but it’s Mendez who steals the show here. It seems that Jose’s family is the largest tobacco grower in the DR, and they’ve developed an exclusive version of an age-old tobacco for H. Upmann called Andullo. It’s native to the Dominican, and demands a specialized fermentation process – so it’s rarely used in cigars. But because no detail was going to be spared to make this special smoke, the Andullo – along with other exotic Dominican tobaccos – was put in the filler to add strength and a rich aroma. Billed as a tasting tour of Hispaniola, this H. Upmann will teach you just how dynamic a Dominican cigar can be.

A boutique combo that will set taste buds ablaze…the original Leaf concept began as a collaboration between Island Jim and Oscar Valladares, with the cigar (delicious, by the way) wrapped in a tobacco leaf instead of cello. Now the boys have invited Esteban Dislas, master blender at Fabrica de Tabacos NicaSueño S.A., with RoMa Craft Tobac on his resume. Esteban has opted to put Nicaraguan tobaccos inside an Ecuadorian Habano wrapper to make his spicy Leaf blend. If that’s not your recipe of choice, there’s also Leaf by Omar and Leaf by James – but quite frankly, you can’t go wrong with any of them.

Matt Booth, the sequel. He was originally planning to step away from the cigar business in January of 2017; Caldwell and AJ Fernandez, no strangers to collaborations, managed to pull him back in…together, the three put out The T., a Nicaraguan puro that smokes with big sensations of oak, leather, coffee and pepper. The three keys on the box and band are said to represent this trifecta of cigar makers – no small feat, as getting three guys together to make a smoke is a crossover of epic proportions. The T. is made at Tabacalera AJ Fernández, and was originally slated as a limited release of 100,000 cigars. So I’d suggest moving on them quickly, before your luck runs out.

I may be mixing TV and music metaphors here, but this Montecristo-Crowned Heads pairing – at first glance, putting Crowned Heads with the Grupo de Maestros was as unlikely a collaboration as Bing Crosby and David Bowie doing Christmas tunes. But this pairing works, and works extremely well: flavors abound, with citrus, earth, pepper and cedar taking their turns at the center of the mix – the smoke is abundant, and super-creamy, too. I’d say this one tends to be more in the Crowned Heads camp than Montecristo, but fans of either brand can easily get behind this mashup.

When I caught wind of this collaboration, the first thing that came to mind was Kung Fu Theatre – it was a staple of my Sunday morning TV diet growing up. This is one of those student-meets-the-master stories: back in the La Gloria days, Ernesto Perez-Carrillo took Michael Giannini under his wing…when EPC left, his protégé continued the master’s tradition with the Serie N, Serie RF and Artesanos de Tabaqueros, among others. Flash forward a decade: Michael is now developing new smokes for Ventura Cigars, and has called upon his sensei to join him on a series of Archetype cigars that includes Sacred Scales. Together, they’ve combined Nicaraguan tobaccos under a Mexican San Andres wrapper for a spicy, sweet and full (strength and body) smoke. The circle is complete.

Reading Time: 7 minutes Flavor matters, and the Dominican Republic has plenty of it. The good news is, you don’t need deep pockets to enjoy their cigars: introducing 10 Dominican under $5 a piece – they’re proof that a great smoke is never out of reach.

Making an American Cigar: a Tour of the Avanti Cigar Factory