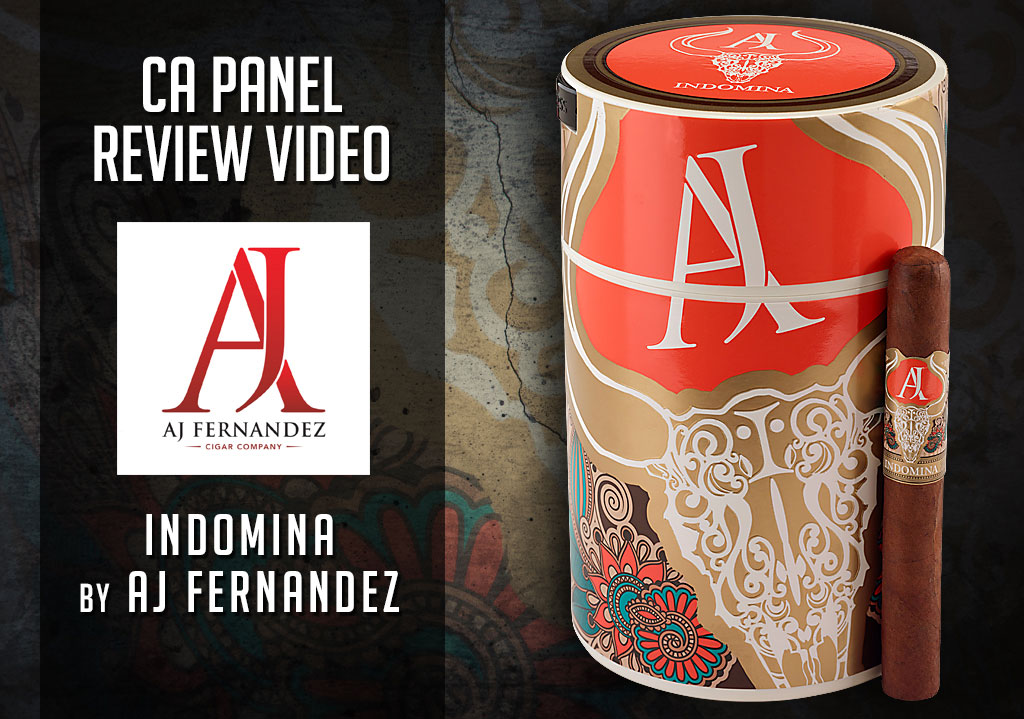 The Indomina by AJ Fernandez Back Story

Stop us if you’ve heard this one before: a spicy, full-flavored AJ Fernandez cigar, reeling with dark Nicaraguan tobacco flavor…hey, why mess with success? Loosely translated as “fierce” or “untamable,” the word Indomina may be a bit of an overstatement, because the smoke is far from overpowering; the flavor intensity, however, is another story. The Indomina by AJ Fernandez utilizes a blend of all-Nicaraguan long-filler core bound in a spicy Mexican leaf, then finished in a tawny, Habano 2000 wrapper grown in Ecuador. Presented in convenient, refillable vacuum-sealed Famous HumiJars of 20 cigars and 5-packs, the cigars are rolled in three 50-ring sizes: Churchill (7″ x 50), Toro (6″ x 50), and Robusto (5″ x 50).

To learn more about this exclusive AJ selection, watch our video and read our notes to get a snapshot of this smoke.

Summary: Indomina…meant to be taken as “fierce.” This AJ-made blend certainly exerts some aggression.

That’s not to say this is an overly-strong cigar; there are stronger cigars out there for sure – and for that matter, there are stronger AJ Fernandez cigars out there. Fierce describes the intensity of the flavors, and in the Indomina by AJ Fernandez, they’re also pretty edgy. Think things that poke the taste buds: pepper, spice, cinnamon, ginger. All of these bitey sensations dominate the beginning of this cigar; it’s not until the first 1/3 mark that they whoa down. Even as some smoother, creamier flavors develop, this smoke still leaves my tongue with a case of prickly heat.

It’s here that the flavors start to jive nicely – and the Indomina turns up the fuller bodied sensations, with oak and leather leading the way. A bit of a leathery sensation deep down, along with a charred steak taste. Even as this smoke gets its foothold at nearly-full in intensity, the pepper returns as a topper to the woodsy, earthy flavors at the core.

Performance-wise, the Indomina by AJ Fernandez does not go easy on you: sturdy flavors, dominated by pepper and wood – plus a little earthiness. Fine char line, burns decently straight for the two-plus hours that this cigar will hold your attention, and burns cool to the nub. A lot to ask from a cigar this inexpensive, and it delivers.

From the get-go a peppery smoke, but once the pepper falls-off, the smoke issues a mostly earthy-woody-spicy profile, typical of many Nicaraguans, although there is some saltiness and a peppery residue on the finish. The flavors are well-balanced as the smoke smooths out nicely.

Just as the cigar crossed into the second act, the smoke became much sweeter. Nice! The pepper all but faded and the smoke remained well-balanced maintaining a mostly earthy-woody profile. But within minutes of that observation, the pepper returned. Hmmm…

A holdover from the second third, at first, but at several inches from the head, the flavors intensified issuing more earth, cocoa, wood, pepper; even some espresso creeped into the mix.

Summary: Not being a fan of peppery cigars, I’m sort of on the fence with this cigar, and here’s why. The cigar I smoked in the video was not as peppery as the baseline cigar, nor did it have the peppery finish on the palate as the baseline. This is also discussed in the video, but based on both cigars, which were consistent in every other way, the Indomina by AJ Fernandez Toro is a pretty intense smoke overall; not so much in terms of its body, which is rightly full, but it does offer a lot of flavors to sort through as it smokes, and each is very well-defined. Of course, it’s got all of the fine details you’d expect from an AJ Fernandez cigar: great construction, lots of distinctive flavor, and it smokes evenly for well over two hours. If rich, bold, complex cigars are your thing, the Indomina should do it for you, and at a really fair price, too.

Summary: AJ knocks another one out of the park! While our own views varied widely on this cigar, I found the Indomina by AJ Fernandez holds a profile that’s super-rich, creamy and chocolatey. While it’s a slow starter, the first notes greeted me like an old friend with creamy notes of toast and wood with a peppery tang on the finish. Through the first third there was a smorgasbord of dark cherry sweetness, backed with a lot of generally woody and creamy notes.

The burn was fantastic. The ash held tight and the burn line was so sharp it could have been cut by a laser. The peppery scratchiness dissipated while the cherry flavor dominated, and a hearty bread note chimed-in with nuanced flavors of nuts, toast, charred wood and cocoa. Of course, you never truly taste a cigar until you retrohale, and brother was it a gamechanger – a rush of white pepper with charred oak, earth, a mineral note, caramel sweetness and the aforementioned cocoa, coffee, and nuttiness.

By the end of this cigar there was just too much to list; the flavor notes went on and on, ever changing in intensity and rich creaminess. Overall, smoke the cigars as soon as you can – preferably with a nice dark rum.

Summary: Move over Jose Pepin, because AJ Fernandez is now the hottest cigar maker on the planet. I mean no disrespect to the great Don, his cigars are magnificent, it’s just that Señor Fernandez is making so many new sticks for different companies, all with different profiles and one better than the next. Which leads me to the Indomina, the newest offering from AJ, and another classic flavor-bomb at that.

I don’t usually start a review with a cigar’s construction, but in this case I’ll make the exception because this stick is what great cigar rolling is all about. The burn is excellent as can be creating a solid, slow-burning ash, while the impeccable draw fills your mouth with thick, creamy smoke. If you take your time, you can easily stretch this one out for a good two hours.

I’d say this is a medium to full-bodied smoke, and while leaning towards the fuller side, it’s not really strong. As far as the flavor profile goes, it is very complex with pronounced notes that you will recognize. Right off the bat I got cedar and almost like a white pepper, (which is not as tangy as black pepper). About a third the way through any spiciness starts to subside as you’ll notice dark cocoa (like a very dark semi-sweet chocolate), along with some really pleasant notes of black cherry.

The Indomina by AJ Fernandez is a complex cigar that you should sit back with and enjoy for all it has to offer. I relaxed to the max by pairing my first one with a nice hearty coffee and the second with a good bourbon, and this stick held up beautifully. If you want a real experience and not just an excuse to puff on any old cigar, this newest AJ blend is the one to order now, because this kind of enjoyment will add quality to your day, every single time.

Reading Time: 2 minutes Blenders may have a hard time picking their favorite cigars, but can they even pick their own blends when blindfolded? We put Rick Rodriguez to the test in this Blind Tasting of CAO Cigars. Click to find out how he did…